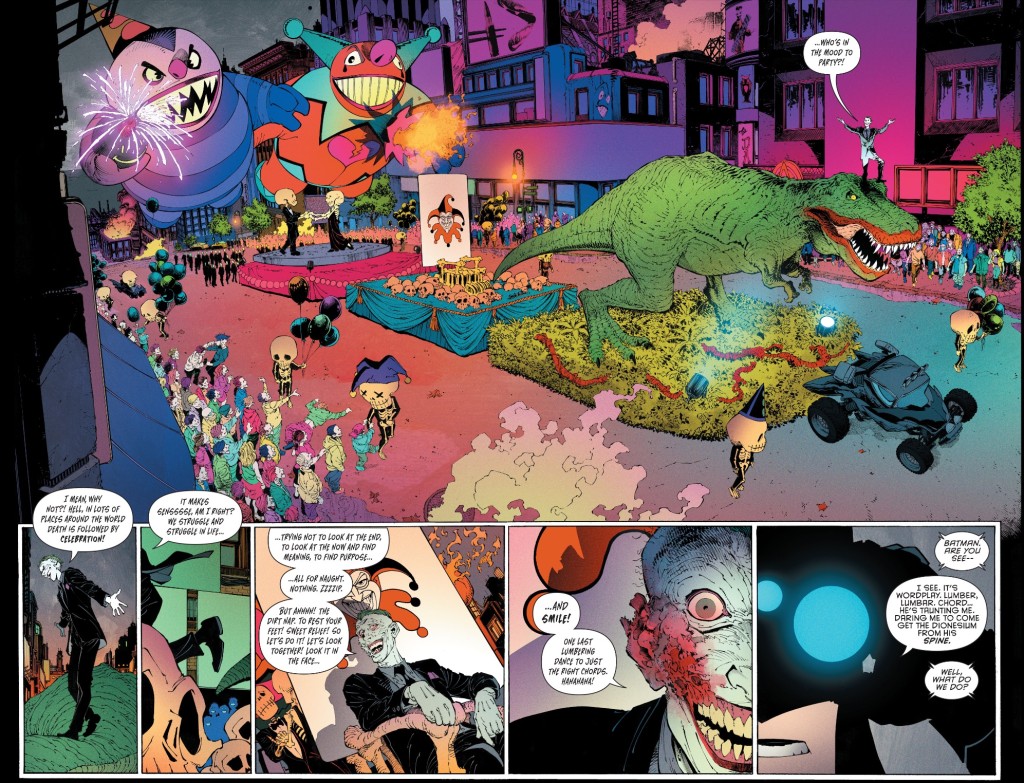 It’s been a bumper crop for “holy shit, we’re all going to die!” superhero comics, hasn’t it?  Hickman cracking the heads of his inaction figures together over on Avengers/New Avengers; the “oblivion machine” of Morrison’s Multiversity that is apparently death inside the story and the death-in-life of comic book fandom outside the story; and now Scott Snyder’s “Endgame,” hands down the most attractively illustrated college term paper of all time, which just concluded in Batman #40 this week.

(Check out the rest after the jump because, you know, spoilers and I’ll probably ineptly screenshot some images and stuff.) 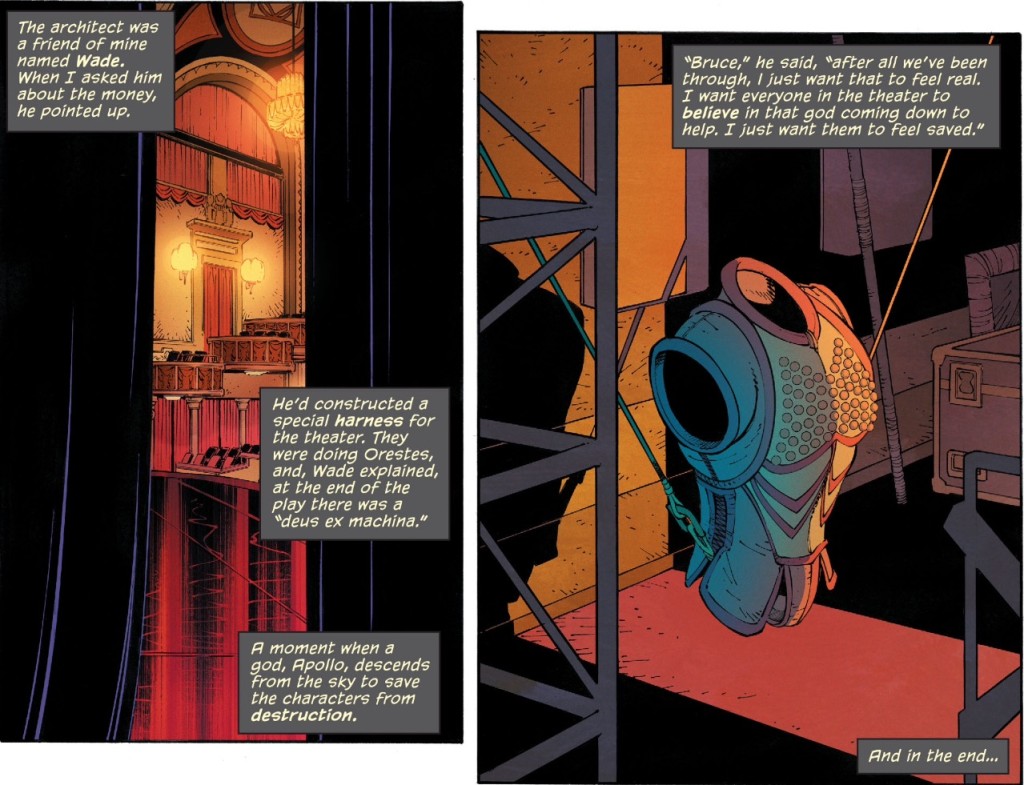 First off, let me be candid: if you like Batman, and you like unpacking meaning, it’s almost impossible to hate what Snyder (force-multiplied considerably by artist Greg Capullo, inker Danny Miki, and colorist FCO Plasencia) have done here.  It’s a Lootcrate of thematic musings, with the plot acting mostly as styrofoam packing for all the bits about the Joker-as-Dionysus, and the carnival being the parody of life that life threatens to become in the presence of death, and Batman and Joker as interchangeable masks of comedy and tragedy, life and death, and an awful lot of stuff about theater and narrative and history, and whether Batman’s life is a tragic or not, and if it is why isn’t he dressing up as a goat since that’s what tragedy means?  In a way, it’s a comic Herman Melville might’ve really dug and, in a way, it’s not.

Because Melville, while certainly ambitious in his thematic goals, possessed an appreciation for elision, for leaving just a bit beyond your grasp, and Snyder here is more than eager to lay it all out for you in Tumblr-ready panels with Joker saying things like “I could have made you forever, just like you always wanted! My blood, this…I could have saved you! This could have had a happy ending!  It could have been hilarious!”  “Oh, I get it,” Melville would’ve mumbled, scratching his cheek in an effort to look more pensive than confused.  “The Joker is offering Batman a marriage and a happy ending, so he represents….comedy?”

(And let me just say, I’ve always wanted to make The Joker an accidental immortal: not only would his undying status more effectively mark him as a harbinger of death, but it’s also a creepily fun way to take “why doesn’t Batman just kill The Joker?” off the table.)

So, yeah, I can’t hate this, especially since Capullo and Plasencia manage to keep their own look going while so effectively conjuring the feel of Miller/Janson/Varley’s The Dark Knight Returns.  This is a story that takes a lot of the imagery we associate with TDKR—Batman fighting Superman, The Joker and his knives, Batman and a big-ass tank—and jumbles them forcefully.  Narrative is the linchpin of history in this story, with a significant amount of energy on Batman’s part spent battling Joker’s claim of having shaped Gotham from the beginning (and, again, to give Snyder his due for his deep cuts: the name Gotham derives from a town in England inhabited by fools), so it makes sense Snyder/Capullo/Miki/Plasencia are in their way usurping Miller/Janson/Varley.

And, as with so much of what I see in Snyder’s Batman, “Endgame” also strikes me as an equally forceful rejoinder to Morrison’s run on Batman.  As Morrison states over and over, “Batman and Robin can never die!” and suggesting, at the end, that this very immortality is the hole at the center of Batman, making him simultaneously invaluable (as an idea) and useless (as a solution).  But for Snyder, if The Joker represents the unavoidable solution at the end of our equation—death—then Batman has to represent the equation’s meaning, the embrace of life.

All of which would be great if it was just lying around for us to pick up if we were feeling keen, but Snyder makes sure Alfred explicitly tells us that in the last two pages of the book. That’s problematic.

While it’s sensible of Snyder not to expect a David Uzumeri to be there to provide online annotations and guide us through the story, it’s also more than a bit of a cheat.  Not since high school (which was the last time I finished a John Irving novel) have I read a story that so openly functioned as its own shipping invoice, items worth your attention thoughtfully underlined and circled, the last page of Endgame perfectly mirrors the first in a way that makes Batman the Apollo to The Joker’s Dionysus.

I appreciate the formalism of it, and the ambition of it, but as with Hickman’s run over on Avengers/New Avengers, it also doesn’t fully engage me.  Unlike Hickman’s heroes, Snyder’s Batman refuses to accept an impossible situation as impossible (which makes all the sturm und drang of the final fight with the Joker satisfying), but Snyder has also adopted a very high level of “because I say so” assertions in this story, and it seems like you’d have to be someone much younger and hungrier to make an emotional connection with the material than me in order to make the buy-ins the story requires.

To name just one, I can’t believe Batman would really give a crap about whether or not The Joker was immortal—the Batman DC has presented to us since, oh, Miller’s Dark Knight Returns is a man uninterested in the bells and whistles of superhero trapping except as options for him to exploit.  To name another, it’s a little hard for me to buy that when someone makes their way into the Batcave, the only defense developed by a billionaire with a penchant for automated systems is a butler with a shotgun. 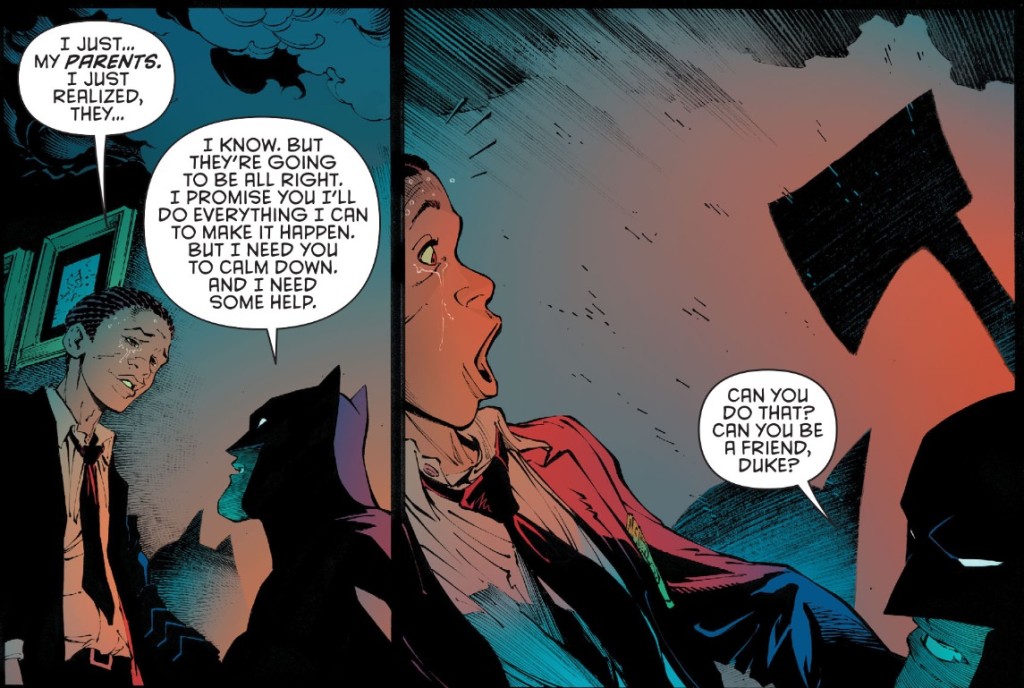 In order to make the Joker a force of supernatural terror, Alfred, Jim Gordon, and even Batman act as recklessly as teenagers at Camp Crystal Lake, with Snyder putting strange dialogue in their mouth like, “Can you do that?  Can you be a friend, Duke?” just so he can get the payoff of someone close to Batman hyped up on Joker Juice hissing “Don’t do it…kiiiid.  He’s a baaaaad friend!  HAHAHA!” By the end, when Batman has hopped on The Joker’s back, pretending to beg for forgiveness even as he keeps the villain from a pool of regenerative blabbity blab, you either have to go all the way in or you’ll be unable to avoid thinking, “Nahhh.”

It’s frustrating when a story that so clearly received so much attention from the creators requires so much inattention from the readers to work. For some lucky fourteen year old kid, the trade of this will  rewrite their map, new thoughts bounding like heat lightning across the hemispheres of their brain.  But for the rest of us, Joker or no Joker, it’s closer to Nolan’s The Dark Knight Rises than The Dark Knight: a five course meal where every dish is either a little over- or undercooked.  Snyder’s coup has been utterly successful—nobody controls Batman’s history now like he does, but even if he’s conquered the narrative, he still hasn’t mastered how to tell a story.

4 comments on “The Name of the Game: Jeff Browses The Cliff’s Notes of Batman #40”