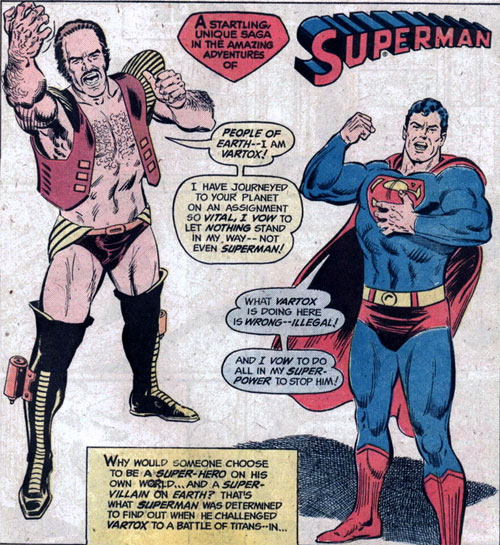 No, it’s not our new Wait, What? portrait (although Jeff does kind of covet Vartox’s hairline at this point)

Yup, here we go!  Remember, if you don’t dig the player and just want the link to the episode to cut and paste into your own player, another browser window, or whatever you prefer, check out our first comment which will hook you up.

That said, let’s get cracking with the show notes!  This ep. runs a bit over two and a half hours and cutting all my stammering coughing fits took a bit more time so…

00:00-5:18: Greetings!  Time marches on, bringing you the podcasting equivalent of chocolate bars and cigarettes—another episode of Wait, What?  Of course, you should expect us going off track almost immediately, with talk of Princess Superstar and Eminem.

5:18-39:21: It’s been a tough week for comics with Graeme declaring four minutes in, “I’m burned out.”  We’re both a little bit burnt on books by the Big Two, and the Chris Sims/Valerie D’Orazio situation has made things seem quite grim.  Only in the existence of Mr. T’s upcoming DIY TV show, I Pity The Tool, can Graeme find any joy.  Neither of us are friends with Chris or Val but Graeme is in a “friend of friends” situation, so our discussion about the situation is a tad on the politically fraught side but considering it’s a case of comics criticism that is also an act of bullying, and so we feel it’s worth talking about.

39:21-1:02:00:  “I’m feeling down on a lot of things this week,” concludes Graeme. “I totally get it, I totally get it,” consoles Jeff. “And it’s probably because you read Batman Eternal issues #49 and #50.”  And such is the power of our not-clumsy not-weird segue that we’re off and having a full-on heavy-on-the-spoiler talk about those issues, the reveal of the Big Bad (which Jeff thinks was handled bigly and badly), whether either of the Big Two will be able to sustain a solid weekly comic, the collection of the Superman: Doomed event, and more.
1:02:00-1:19:03:  After giving you a word from our new sponsors (depression, emotional exhaustion, and ambivalence), we move on to ostensibly talk about Superman #39 by Geoff Johns and John Romita, Jr., but we really talk about Gene Yang, Superman’s incoming writer, with Jeff doing more than his share of fretting about Yang as a newcomer to DC offices, and the “collaborative” nature of creative, editorial and marketing.  Also discussed: the pre-Convergence issues of Batgirl and Grayson, Jeff’s confusion about what’s a jumping off point and what’s a jumping on point, which of course is something to keep in mind considering…  Convergence! Secret Wars! This summer, the Big Two are trying to disrupt themselves (it’s like Uber, if Uber was owned by the taxi companies).  Graeme, being Graeme, likes the “this is what you need to know about the characters” pages that are going to be in Convergence.  Another thing Graeme likes the casting of the first villain for the Supergirl show, which is this guy in the image above.  Yup, Vartox.  Apparently, they’re not going to do the whole pleather diaper but, really, this can only bode well for the TV show, TV, and really the state of the world. 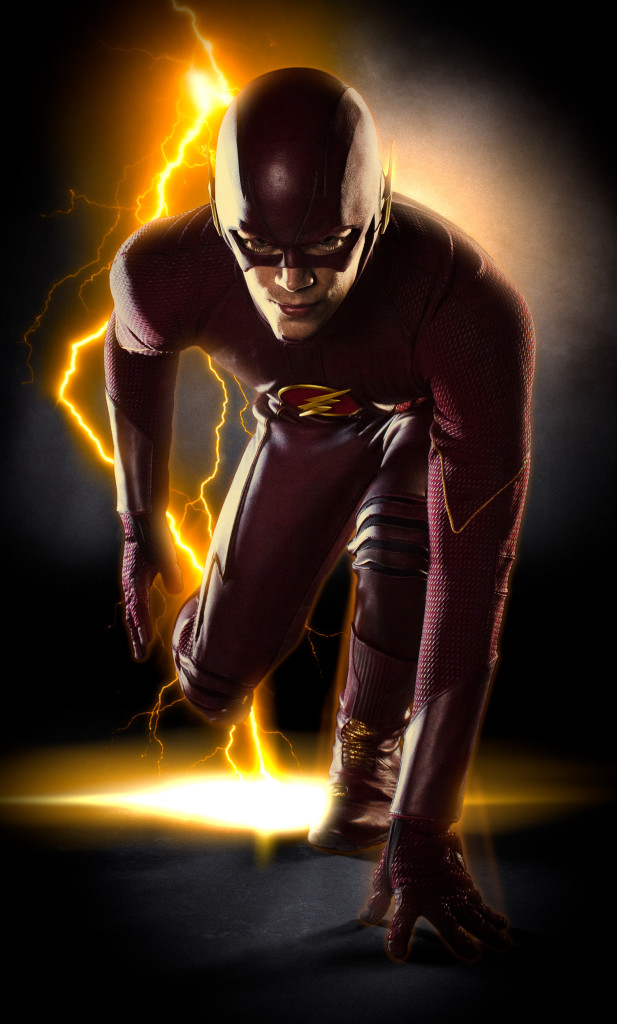 1:20:07-1:23:20: This is a good transition to Jeff asking Graeme about the Flash TV show.  Graeme has good things to say about the show: and by good things we mean “FULL SPOILERS” from 1:20:30 to 1:21:50 and skip over that section if you’re behind on the show, Graeme says, really, please do.
1:23:20-1:35:27: Quite the contrast to the Flash TV show is Graeme’s catch-up read on Hickman’s Avengers and New Avengers which he calls “staggeringly bleak.”  Spoilers for this storyline too? Although since I think Graeme doesn’t get beyond the confines of what’s on Marvel Unlimited, he doesn’t talk about anything that’s not six months old.  We talk about plot hammers, about the difference between creators marking off their own section of continuity and ignoring established characterization altogether; and more. 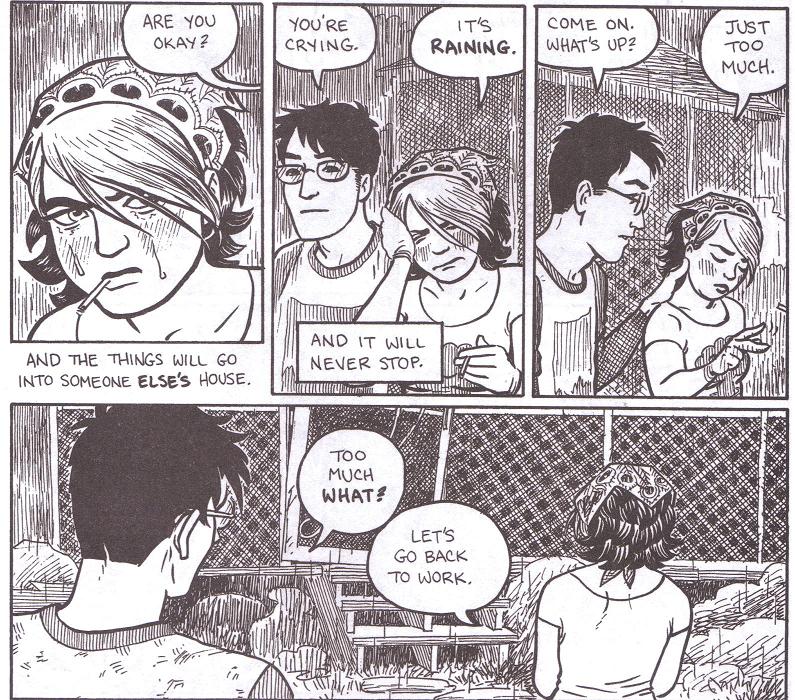 by Cory Doctorow and Jen Wang (who really should’ve gotten more credit for doing the full adaptation, as I recall); This One Summer

by Mariko Tamaki and Jillian Tamaki; and Bad Houses

by Sara Ryan and Carla “Speed” McNeil, the last of which we talk about for a bit since Jeff read a quajillion years ago.
1:44:36-1:49:25: Thanks to Graeme’s recommendation, and also the free SXSW books offered through Comixology, Jeff read and really, really liked The Black Hood #1 by Duane Swierczynski and Michael Gaydos from Archie/Dark Circle.  We both think Archie is doing some smart, very readable stuff this week although Graeme is both more optimistic about the Archie horror books getting back on schedule and more into Waid and Haspiel’s The Fox than Jeff.Zer
1:49:25-2:07:21: “In another universe,” announces Jeff, “we ended up with me haranguing you about all these Silver Age Flash comics that I read.”  (Graeme points out that universe was last week, just after we finished recording Baxter Building.  Whoops.)  In reading those issues, Jeff noticed something about the characterization of Barry Allen in the ‘50s, ‘60s, and ‘70s that he wants to talk about.  Discussed:  a whole bunch of issues of The Flash, including Jeff’s ongoing obsession with issue #275 by Cary Bates and Alex Saviuk which is brilliant. 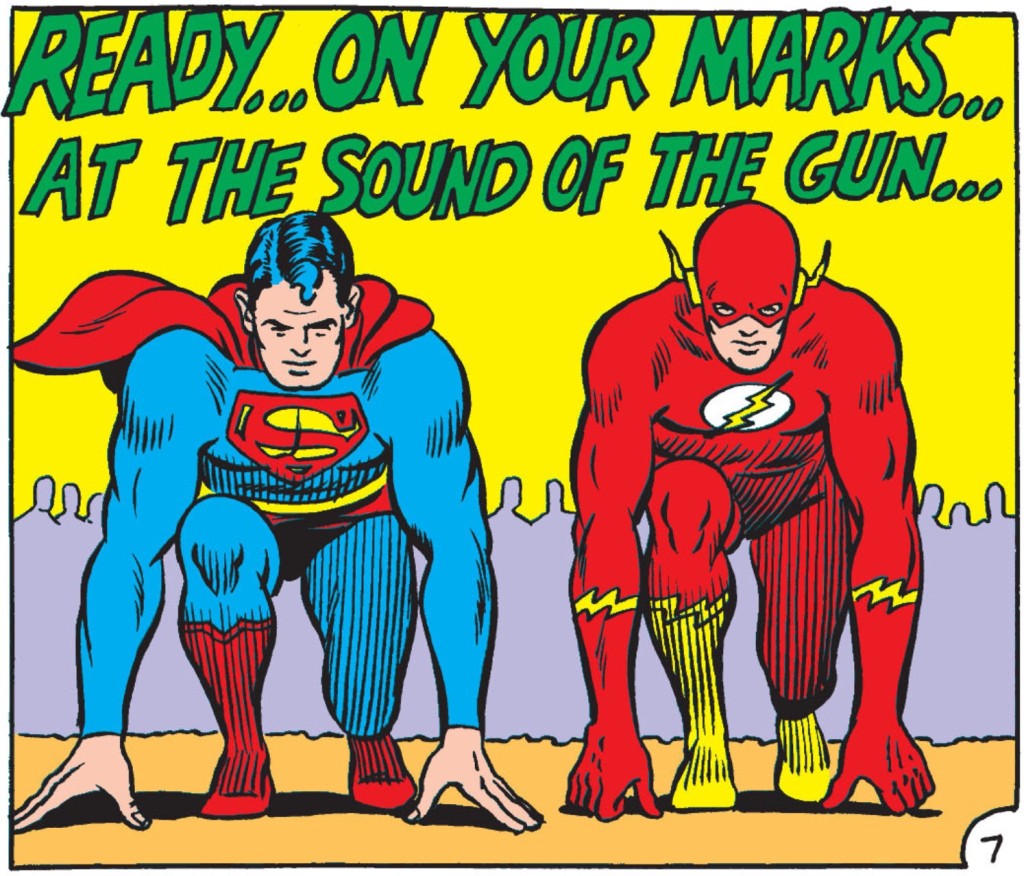 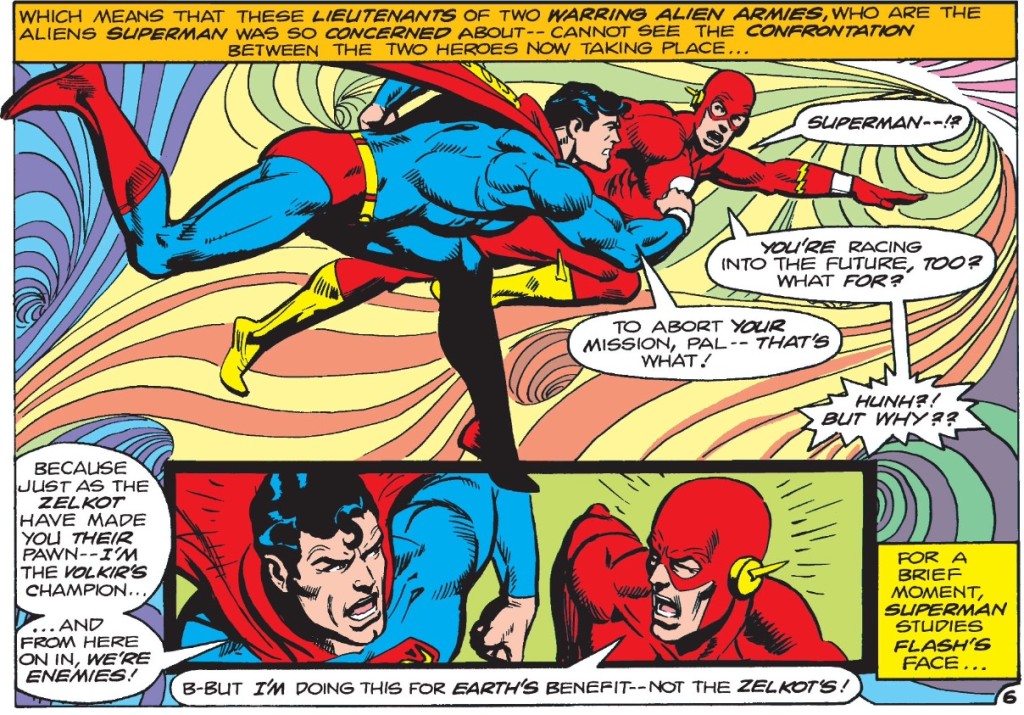 2:07:21-2:13:02: Jeff has read Howard The Duck #1 and literally doesn’t know how to talk about it.  Graeme hasn’t read it, but doesn’t quite know how to talk to Jeff about it, holding back as he is a “you scab!” response.  It’s fun, fertile ground on which to build an incisive comics discussion!  Join us, won’t you?
2:13:02-2:18:10: Other stuff Jeff has read, talked about quickly: Walking Dead #138 by Kirkman, Adlard, Gaudianao and Rathburn; Outcast by Kirkman and Azaceta #7, by Kirkman and Azaceta; Unbeatable Squirrel Girl #3 by Ryan North, Erica Henderson, Rico Renzi; Chrononauts #1 by Mark Millar, Sean Gordon Murphy, and Matt Hollingsworth.
2:18:10-2:22:29: Neither of us have read Invisible Republic #1 by Corinna Bechko and Gabriel Hardman, but it looks so lovely Graeme, who hasn’t read it, chides Jeff for not reading it.  Graeme has been catching up on Southern Cross by Becky Cloonan and Andy Belanger from Image which he enjoys but wishes Cloonan was also drawing.  And Graeme also read Giant Days from John Allison and Lissa Tremain, which he also wrote about  on this site here.
2:22:29-2:28:30: Through a problem with, I don’t know, similar seeming covers or confusion about where he left off or both, Jeff had trailed off on Zero, but he checks back in on issue #15 by Ales Kot, Ian Betram and Jordie Bellaire, which is a gorgeous looking issue that has a lot of rewards for fans of William S. Burroughs. Graeme, who is reading it, chides Jeff for not reading it, even though Jeff is talking about how he just read it.  I’m sure Graeme would object to the characterization as “chiding.”
2:28:30-2:29:27: Ooops, we’ve gone too far and so Graeme turns into the Lord of the Flies for a few minutes until Jeff can bring himself to interrupt and suggest they reboot.
2:29:27-end: Reboot!  Convergence! Secret Wait, What?! And it’s pretty much also our “closing comments!” section, with us talking about how next week is not a skip week and how you’ll be getting Ep. 173 in just a week and then a skip week.  Also!
Under The Tote Bag! Places to look for us at—Stitcher! Itunes! Twitter! Tumblr! and, of course, on Patreon where, as of this count, 98 patrons make this whole thing possible.
We hope you enjoy and we’ll see you next week!