Every few months here in Portland, there’s something called Frankenstein’s Comic Swap. I might have written about this before; it’s a swap meet for comic dealers, essentially, a small room filled with longboxes and cheap comics where you can pick up random shit for relatively cheap. This weekend, I made out pretty good — I got the three-issue Martian Manhunter: American Secrets by Gerard Jones and Eduardo Barreto, the four-issue Machine Man mini-series from the ’80s by Tom DeFalco, Herb Trimpe and Barry Windsor-Smith (I didn’t remember Windsor-Smith took over art entirely in the last issue, co-plotting it, too, but he does), some Marvel Age and Micronaut back issues and a twelve-issue series I have become increasingly more fascinated in in recent years: DC Challenge, from 1985-1986. (For an idea of how cheap Frankenstein’s Comic Swap is, I got all of that for less than $20.) 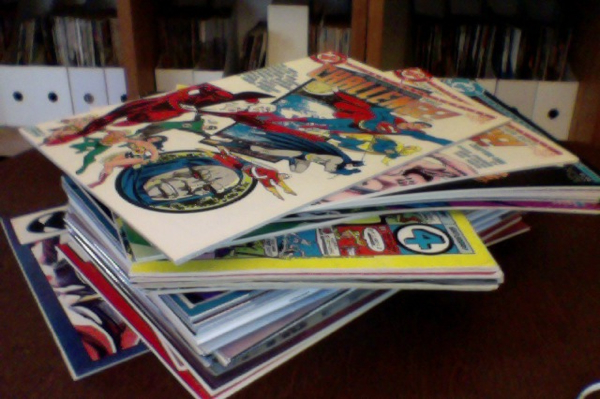 This was a series I remembered from my childhood, even though I’d never read an issue before. There were full page ads for the series throughout DC books before it launched, explaining the premise with preview art showing characters I’d never heard of, and it all sounded so alien and exciting to the 10-year-old me I was at the time. For those who’ve never heard of DC Challenge, it’s Exquisite Corpse: The Comic. Each issue was by a different creative team, who’d have to resolve cliffhangers left by the previous team, set up cliffhangers for the next team, push the overarching story of the series forward and stay away from characters they were regularly working on at the time. Fun, right? Well, as I bought the issues, the dealer said, “Yeah, this was a mess.”

Here’s the thing: the dealer was entirely right: DC Challenge is most definitely a mess. It’s that way almost from the first issue, in which Mark Evanier creates a story filled with mysteries that could be connected in such a way that clearly is meant to leave options open for future writers, but instead just feels unfocused and scattered from the start, and that impression just continues throughout the entire series: Why are demons possessing people? Why are dead celebrities suddenly back to life? Why is Aquaman missing from the JLA Satellite? What are those mysterious numbers? Who knows? The writers clearly don’t, and that goes from being fun to being frustrating amazingly quickly.

Of the writers — Evanier, Len Wein, Doug Moench, Paul Levitz, Mike W. Barr, Elliot S! Maggin, Paul Kupperberg, Gerry Conway, Roy Thomas, Dan Mishkin, Marv Wolfman and Cary Bates, each one taking an issue apiece with the exception of the final two, who co-write the penultimate issue; the final issue is co-written by Evanier, Wein, Conway, Thomas, Mishkin and Wolfman — it’s kind of fascinating to see the approaches they take to the series. Some are happy to have fun and fuck things up for the writer following (Moench and Maggin, especially), whereas others can’t help but try and tidy things up for the reader: Conway and Thomas, the latter unsurprisingly perhaps, take on a lot of work to try and rein in the story’s wilder excesses and earned a lot of goodwill from me as a result. 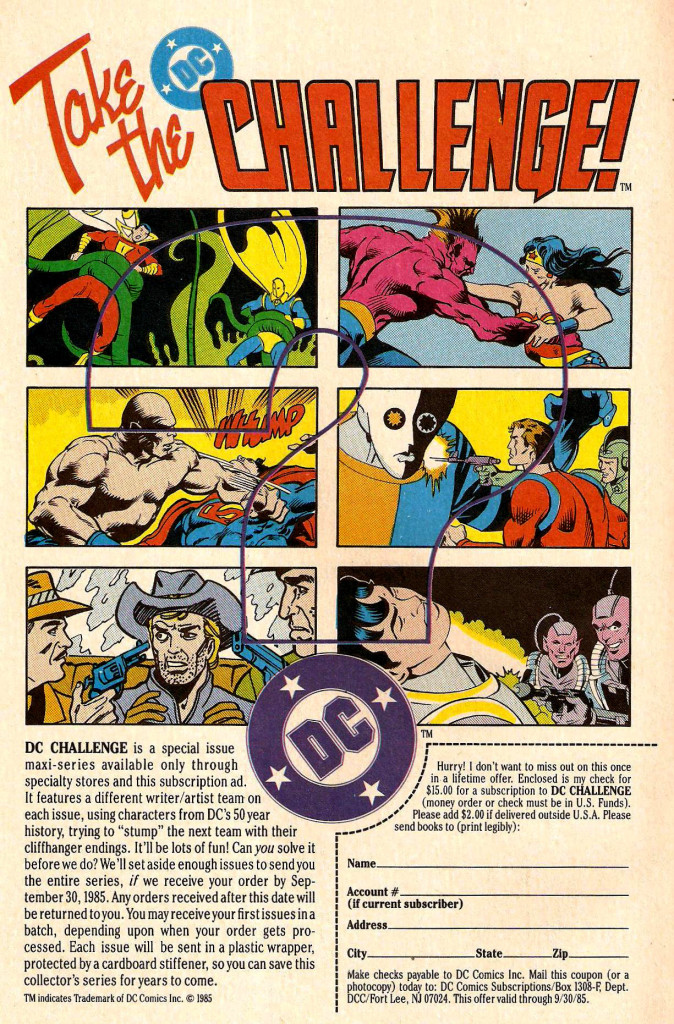 It’s fun enough to work through — and, I suspect, will be moreso during a re-read, when I’m less concerned with linear plot — but it’s also as self-indulgent as hell; in terms of writing, this feels more like something that was a good time for those involved far more than anything where the reader was any appreciable part of the decision making process. (Something that is fun, however? The fact that each issue is named for a title given by the previous writer, leading to stories called things like “Don’t Bogart That Grape… Hand Me The Gas Pump!” and “If This Is Love, Why Do My Teeth Hurt?”)

With all of this self-indulgence going on, you might wonder what the selling point of the series is. Well, let me tell you some of the artists that drew the book: Gene Colan, Carmine Infantino, Gil Kane (inked by Klaus Janson!), Dave Gibbons, Curt Swan, Keith Giffen… I think you get the picture. It’s a great looking book, seeing artists play with characters that you might not expect them to work with. (Chuck Patton, whom will always be linked to Justice League‘s Detroit era, ends up doing a bunch of work with Jonah Hex, inked by Mike DeCarlo and it’s just lovely stuff; similarly, mid-80s Munoz-inspired Giffen doing Fourth World stuff? Gorgeous!)

If there’s value to DC Challenge for someone who didn’t make it, it’s in the art; even as the story spirals around on itself and gasps for air, the book continually looks great. Considering I grabbed all 12 issues for $3, that feels like a pretty good bargain — but when it comes down to it, the book betrays its potential by not playing fair with the reader’s expectations. There’s a good series to be made out of the central Challenge concept. Maybe one day, someone will dust it down and try to do something with it.

One comment on “Joys of The Comic Swap: Graeme Is Glad He Didn’t Pay Full Price For DC Challenge”