Usually when there’s one of these huge weeks of comics, I do a bit where I’m like “Whoa, hey, this was a great week of comics! Wow!” Then I write about, like, some random Impulse issue from 1998.

But the haul this week was substantial enough that even I am not going to ignore it. Here, then, are capsule reviews of a few of the notable books this week–first issues, key issues, and, of course, Batman & Robin Eternal. God forbid I not keep everyone apprised of how I’m feeling about that one.

Yes, there’s lots of good stuff this week indeed. So let’s instead start with the big ol’ wet squib that is Secret Wars #7. As this series goes on, it’s appearing more and more like a catastrophic disaster all around.

This is the culmination of Jonathan Hickman’s Marvel writing work, so it’s maybe understandable that it would also be the apotheosis of his writerly tics: all the characters speak in a similar, flat voice; the plot clicks blandly along its track like a toy train; the big moments somehow have all the emotion and awesomeness drained out of them so they land with no impact whatsoever. (Seriously, there are two separate incidents in this book, both coming off dialogue going from on-panel to voiceover, both seemingly structured as impact moments, where the impact is “another big thing is flying to somewhere.” The first one is underwhelming on its own; by the second it seems like deliberate comedy.)

What this book is doing, oddly enough, is making me really appreciate the histrionics of late-nineties writing. Because this is in all significant ways identical to the original Age of Apocalypse event–entire line of books “cancelled” for an alternate Earth story focused on the heroes trying to change time to prevent their greatest villain from taking control, with the associated miniseries conveying the details of the sidequests that are otherwise glossed in the main books–but the execution of the earlier one feels so much smarter.

Part of that, of course, is that it was only four months, and only one sub-imprint rather than being Marvel’s entire output. But the other part is that this sort of thing is just much more fun when it’s pitched in a more exaggerated key.  It’ s not something I’d ever think I’d say, but I’d much rather see this type of story in Roger Cruz’s Joe Madureira knockoff artwork than in Esad Ribic’s much more beautiful, much more impressive, but also much more staid style. And Fabian Nicieza’s motormouth characters and Scott Lobdell’s mimeographed-Claremont dramatics sell this kind of thing much better than Hickman’s intricate plotting and lifeless scripting.

The tl;dr version: I finished this book and thought, “Oh my lord, I can’t believe we have two more issues of this.” 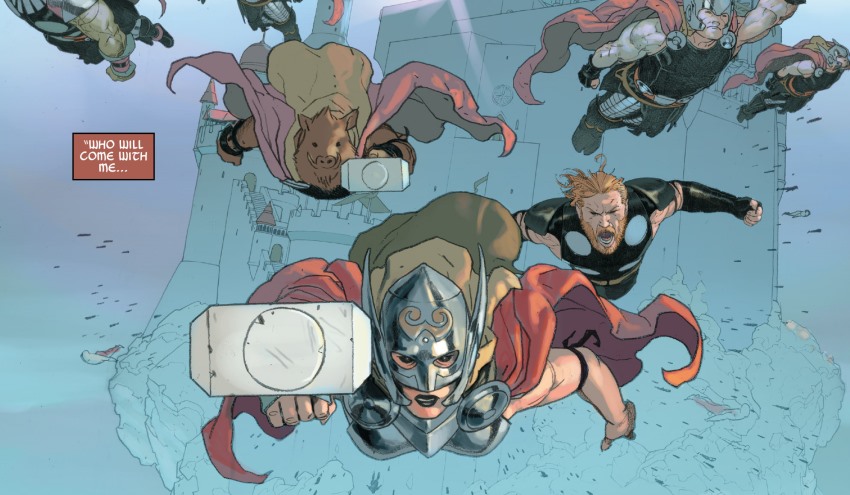 WARTHOG THOR! THE THOR THAT’S A WARTHOG! And yet somehow it is dull.

Then again, that’s the kind of thing I had been thinking about the The Darkseid War one-shots DC has been putting out, and this week totally turned me around on those.

The Darkseid War: Shazam is a decent enough issue on its own, but it’s mainly fun for the high-concept change to Captain Marvel’s character: the traditional inspirations of Shazam’s powers and name (Solomon, Hermes, Zeus, etc.) have been replaced by six new gods (whose initials, luckily enough, ALSO spell out Shazam).

So this one-shot is Shazam (or Captain Marvel — what the hell is his name now, anyhow?) learning who these newcomers are, and what powerset they give him. It’s as comic-book-y a comic-book as ever comicked, and but writer Steve Orlando and artist Scott Kolins are committed enough to the bit to make it work.

(If I’m being honest, I was hesitant to buy in at first, but their choice for the H god made me laugh out loud and sold me on the book.)

It’s The Darkseid War: Green Lantern that’s the true gem this week. Tom King has cemented himself as a buy-whatever-he-writes guy for me, and he’s paired here with Evan “Doc” Shaner, who proves to be a strong fit for King’s formalist efforts and what I imagine to be pretty detailed scripts.

Graeme and Jeff mentioned on the podcast this week that there was something Alan Moore-ish about King’s work on Vision #1 for Marvel, and I’d take it further–I think that King is the most Moore-influenced creator to come along in years, maybe the first one since the pendulum swung in the early 2000’s toward Bendis (dialogue! crime! meandering pace!) and/or Millar (high concept! action movie dialogue! wanton disregard for continuity!) as more primary influences. This is very much another Alan Moore-influenced issue, structurally (and, to a certain extent, thematically), but it makes the absolute most of the interstitial-event-one-shot format, taking Hal Jordan on a clear, discernible internal journey while also giving him a nicely epic fight against overwhelming odds and creating the illusion that the story has moved notably forward while (presumably) not undermining the next issue of the actual event.

Shaner’s art always makes me think of Dave Mazzucchelli, and this issue’s no different. He’s got a really good sense of quiet, but is deceptively good at clean, clear action sequences as well. He’s even able to make a somewhat dodgy Francis Manapul costume redesign look cool, which is its own quiet kind of triumph. This is a really good book. 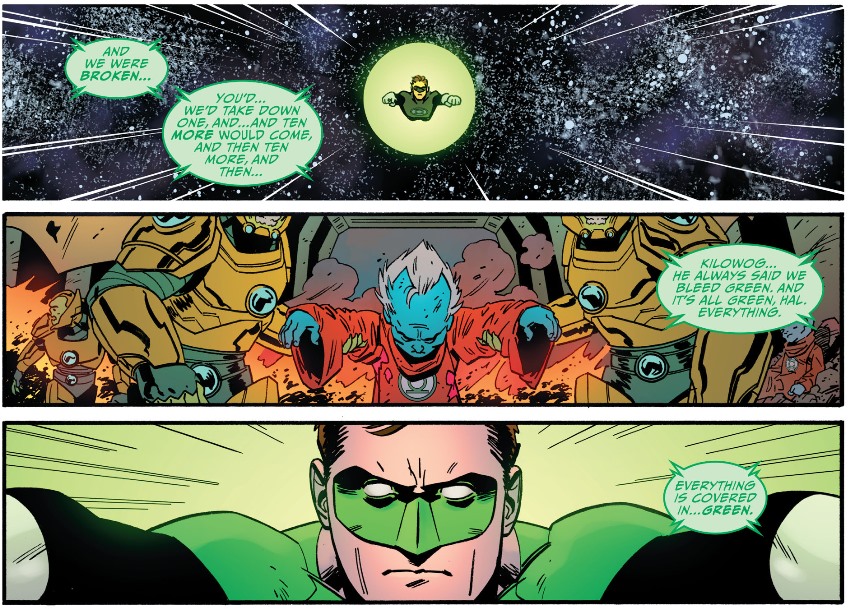 Superman: American Alien #1 is not as good, but it contains one scene that I really wanted to see more of.

This is the book written by Max Landis (whom the internet seems to think I should hate but whom I’ve never actually heard of), with very nice art from Nick Dragotta (including some sumptuous colors from Alex Guimarães, and John Workman lettering that’s comforting like an old sweatshirt), which plans to present seven single-issue short-stories from Clark Kent’s pre-Superman days; this first one deals with Clark wrestling with being able to fly.

There are a few problems with that, the biggest being that I never even need to see a scene of Pa Kent being rural and folksy and wise to Clark ever again. This is a story beat that has been used and reused and tweaked and reused and examined and reused and twisted and reused so many goddamned times, and it was never that interesting to begin with. Just…just stop. Everyone. Please. We’ve somehow reached the point where Kevin Costner’s asshole Jonathan Kent in the movie feels like a better option simply because he’s rural and folksy and dumb and wrong instead, and also because he dies relatively quickly. Pa Kent is the worst. 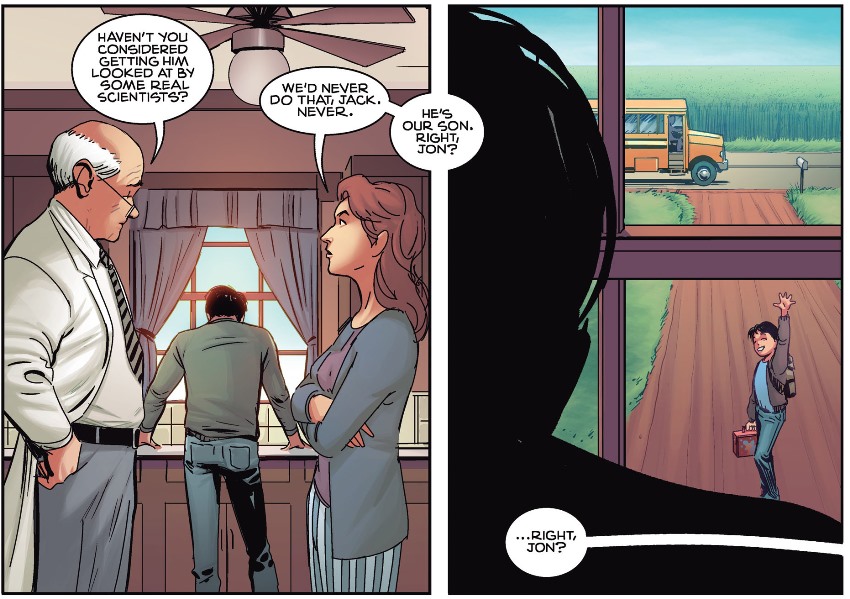 But! There is one good scene, in which young Clark goes to the drive-in to see E.T. That’s a smart, clever juxtaposition–everyone else is watching with the kids as their POV characters, and Clark is identifying with the alien. Spending an entire issue on that–that woulda been an interesting short-story take on Clark’s childhood. This dumb crap with Pa Kent coming to terms with being human and teaching his son how to fly, though…not so much. Really pretty art, though.

God, so many books. Some really quick hits….

Ultimates #1: Al Ewing is another guy who has achieved “buy anything he writes” status from me (as previously mentioned), and this is, for me, his first real misstep since that happened. I’m not sure it’s entirely his fault–the art from Kenneth Rocafort was really not to my tastes, although I find myself completely unable to pinpoint why–but this felt like the prologue to an interesting issue rather than an interesting issue in its own right. I’ll stick around, but I expected to like this much more.

All-New Wolverine #1: Tom Taylor isn’t quite at “buy anything he writes” level yet, but he very quietly has carved out a career taking HORRIBLE-sounding ideas and making them work. This is a shockingly entertaining book, and I look forward to it starting to show up on Marvel Unlimited so I can read more of it. 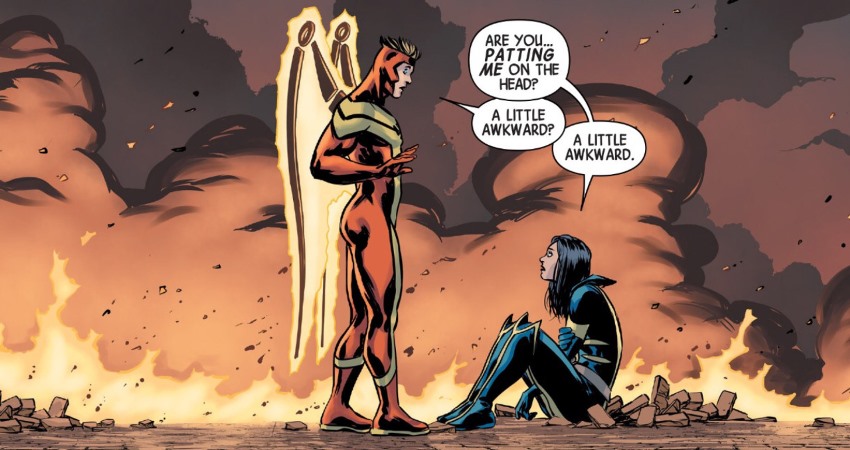 The Goddamned #1: Hey, have you ever had one of those nights where you fall asleep reading a bunch of Garth Ennis comics while Clan of the Cave Bear is on TV and the radio is playing Bible stories? No? Well, Jason Aaron and R.M. Guera would like you to know what that feels like. It’s … cute. As with most of Aaron’s work, it’s technically impeccable and perfectly entertaining, but there’s something about it that feels deeply over-entertained by its own blasphemy. Might work better as a collection.

Batman & Robin Eternal #6: Somewhat astoundingly, I’m still enjoying this, for all the same reasons I’ve previously listed. The “present day” scenes have the breakneck feel of an episode of 24, and the flashbacks do a nice job of providing some character-based moments. Reliably entertaining, if totally not taxing on the brain. I wonder if they can sustain it.