I wound up on Marvel Day At Sea almost by accident. Our friends went on a Disney Cruise a couple of years ago and loved it, and suggested that we might want to come along on the next one. The booking time was chosen more than a year out based on work busy seasons and cruise pricing, not the the theme day. If we had gone a week earlier, it would’ve been Star Wars, which my wife and daughter and I would’ve loved but my son would’ve been indifferent to; instead we got Marvel which has something for all of us.

I had never done a cruise before, so literally everything about the experience was new (and slightly baffling) to me. For those of you in the same boat (LOL BOAT JOKES!), our five day cruise worked basically like this: Day 1 was at sea, travelling to Day 2’s stop; Day 3 was Marvel Day at Sea while travelling to Day 4’s stop; Day 5 is very short and you leave the boat.

While you’re on the boat, you can participate in any number of activities, scheduled (shows, classes, contests, etc.) and free-form (pools, spa stuff, pictures with Disney characters, stuffing your face, etc.). It’s like a large, floating hotel/mall combo, almost entirely tilted toward Disney-owned IP. I saw The Last Jedi three more times while on the cruise. The stateroom TVs have channels including “Pixar Movies,” “Marvel Movies,” and “Disney Classics”. That kinda thing.

On Marvel Day at Sea, all of those things still happen, but with Marvel branding. And, I will tell you, it is a sight to behold.  Here, for example, is a long line of people wrapping around the boat to get a picture with Loki. Not the actual Norse god Loki, of course, and not noted Taylor Swift ex-“boyfriend” (and Loki actor) Tom Hiddleston, either. Just a pleasant, official, onboard Loki. 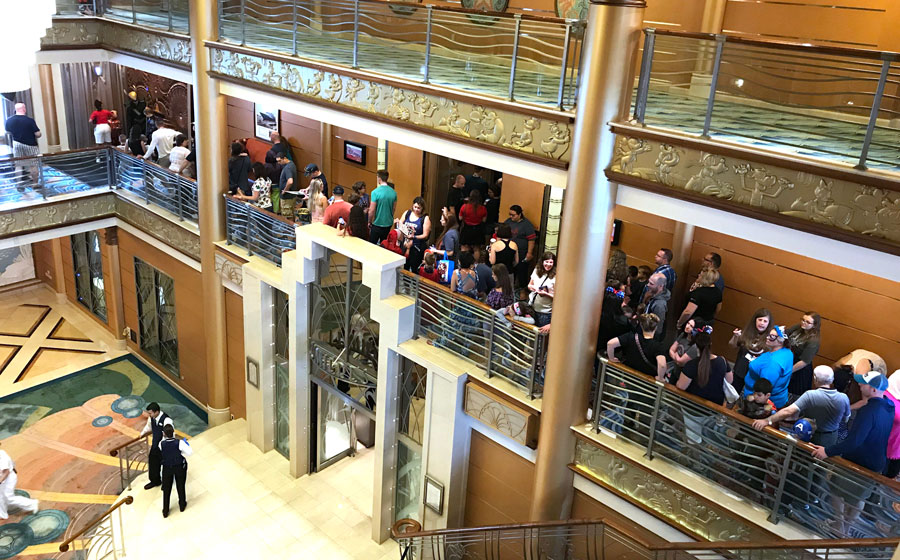 (The characters all give each guest a little bit of light conversation and banter before the pictures, and this Loki (a) was delightfully snarky, and (b) made a couple of oblique references that seemed to imply that he had read the Kieron Gillen and Al Ewing runs, which was nice. He also made fun of my hat.)

Over the course of the day, my kids and/or wife and/or I also got photos with Dr. Strange (who was just wandering around the boat unescorted), Star-Lord and Gamora (ditto), Black Widow (we got in line thirty minutes early for that one, because my daughter was NOT going to miss Black Widow), Groot (another line, and well worth it), and, at a planned, ticketed one-room reverse cattle-call, Spider-Man, Black Panther, and Iron Man.

(All of the actors were terrific in character. My son wore a Spider-Man hat to meet Spider-Man, so Spidey greeted him with a cheery “Hey, now I have to get a hat with your face on it!” The Black Panther seemed to really relish his cat-like posing and his regal bearing. Iron Man had a whole lot of schtick–I couldn’t tell if it was a voice modulator or recorded content from Robert Downey, Jr. or an RDJ impersonator. Black Widow gave me a speech about the importance of intelligence and self-confidence, for reasons too ridiculous to go into.)

But it was especially bonkers in light of the ongoing self-inflicted death spiral that’s been the main story about the comics side of Marvel lately. Our own Graeme McMillan has occasionally expressed surprise that the whole “new editor-in-chief used to impersonate a Japanese dude to get work” story alone has been so largely ignored by the mainstream media and Disney corporate. But after this cruise, I think I see why: because to Disney, the comics are an almost-vestigial organ of content, irrelevant to their whole current scenario.

This is not dissimilar from one of my reasons for why the Nazi Cap storyline wasn’t a big deal in the grand scheme of things. The movie versions of the characters are now burned into the public consciousness in a way the comic characters never were. The evening’s live-action show, up on the main deck of the ship, featured all of the characters listed above, along with Thor, Hawkeye, and (in a shocking twist) the Red Skull. The show used a combination of onstage live-action, pre-recorded footage (as characters raced offstage to “another part of the boat” and the video screen showed what they were allegedly doing), and live pyrotechnics (so when Iron Man was “in a fight on the foredeck”, we could see actual explosions coming from that part of the ship). The plot involved Loki and the Skull teaming up to steal a Stark macguffin, with Hydra agents taking over the ship. (If anyone was put off by the Nazi imagery, I didn’t see or hear it.) It was live-action spectacle on the kind of grand scale that only Disney even really bothers to attempt anymore, and people were still talking about it the next day.

I won a trivia contest that I didn’t really plan to enter (our friends asked us to join them as reinforcements, but the structure of the contest wound up with me stammering awkwardly onstage), beating out a young woman in a Dr. Strange costume. The questions covered both the comics and the movies, explicitly referring to one or the other. (“In the movies, who created Ultron?”) There was a video component, too. But one thing was conspicuously absent: none of the questions referred to the creators. To correctly answer “In the comics, who created the Vision,” I said “Ultron,” and not “Roy Thomas and John Buscema.”

It was an odd and not-coincidental omission, the logical outgrowth of Marvel’s late-nineties slogan asserting that it’s the characters who count. But it re-emphasized one of the truths of the day: what’s successful for Marvel right now are the movies, and those versions of the characters–even divorced from the actual Hollywood actors who play them. 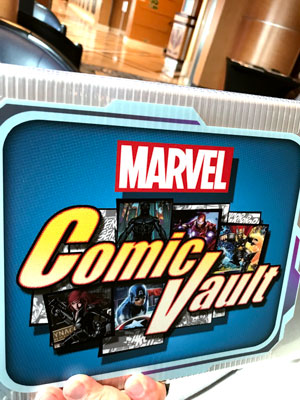 The comics weren’t totally absent from the day. (Heck, the logo for Marvel Day at Sea looks, at least to me, like a modified version of Jonathan Hickman’s Avengers Machine.) There was one event called the “Comics Vault,” which stocked one of the lounges with a couple dozen iPad Pros, each preloaded with a selection of Marvel comics, that you could borrow and read. (More memorable scenes: a dark-skinned young man excitedly pressing an older woman–his mother? his grandmother?–to read some of the Kamala Khan Ms. Marvel books; a buff, 20-something Australian crewman manning the station and slogging through the original Infinity Gauntlet limited series, asking me “They can’t possibly try to do this with the movie, right?”) I gave myself the length of one beer to read some old Mark Waid Captain America issues, just because it was there.

But even that event presented the comics as something from the past–if there were instructions for signing up for Marvel Unlimited, or even for buying the comics on Comixology yourself, I didn’t see them. (I mean, wouldn’t it be a natural to hand out a gift card for a free download or five–or even some kind of massive Marvel Starter Pack–if you cared at all about actually making the comics seem like a vital part of the whole Marvel experience?)  Not to go all Marvel Trivia Guy, but, y’know, in the Marvel Universe of the 1980’s, the Vault was a prison; I’m not sure the name of this event was entirely coincidental.

Reading the comics that built up the knowledge that would eventually win me a trivia contest on a cruise was a solitary activity. I had a couple of friends who were more casual comic readers, but for the most part it was something I did by myself, and didn’t talk about too much. When Weezer referenced Kitty Pryde and Kurt Wagner on “In The Garage” in 1994, the casual reference to something that…niche, I guess…in a mainstream pop song was genuinely stunning. I thought about that a lot, watching all the customers from this cruise get swept up in various bits of Marvel ephemera. It was beyond surreal, like my tween self had reached out across the decades to shape all facets of the world including the planned vacation industry. 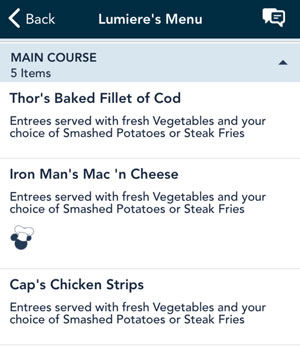 All three of the onboard dinner restaurants changed over to Marvel-themed menus for the evening, which largely seemed to entail adding Marvel character names to existing dishes. We missed it, as that was the evening we had reservations at the “fancy” shipboard restaurant, which is exempt from these kinds of shenanigans (and is also excellent, several orders of magnitude better than the normal fare). But most of the 2,500-ish guests onboard that evening enjoyed Mjölnir Meatballs and Pasta or the Collector’s Warm Apple Crisp(?!?) or Scarlet Witch’s Gingered Soba Noodles(??????!?). Depending on how many of these Marvel Days at Sea Disney plans to run this year, it’s entirely feasible that more people will have eaten the Collector’s dessert and had a picture taken with Groot than will have read a comic featuring either of those characters.

And I can’t shake the feeling that Disney is totally okay with that. They have what they need: the characters, the settings… you know, the IP. When they bought Star Wars, they nuked the entire expanded universe so they could have a clean slate to tell the stories the way they want to. I’m beginning to wonder if they won’t decide to treat the Marvel (comics) Universe the same way.

On the other hand, I got to drink this lovely CAPpuccino, so maybe it’s all okay. 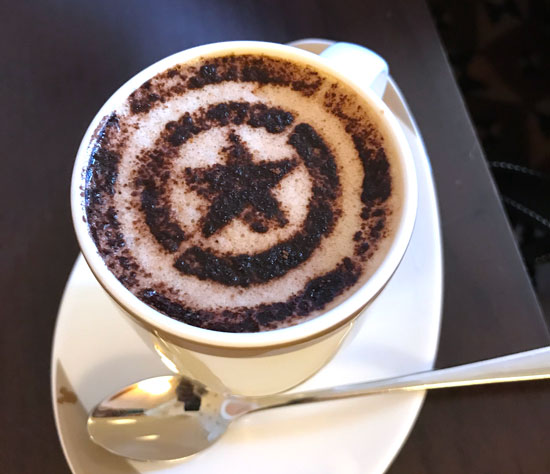 One comment on “Matt Spends A Marvel Day At Sea”