If I had to imagine the meeting where everyone discussed The Curse of the Crimson Corsair — which is technically the full title of Before Watchmen: Crimson Corsair, the prefix unused for reasons we’ll get to momentarily — then I’d imagine a conversation that went something like this:

“So, we’re doing all these Watchmen prequels, so let’s do a pirate comic.”

“You mean, like unseen issues of Tales of the Black Freighter, maybe the ones mentioned in that fake history of the comic?”

“Yeah, like that, but not actually Tales of the Black Freighter. Just a pirate comic.”

“Oh, okay. But it’ll serve the same purpose as Tales of the Black Freighter, right?”

“So, it’ll be meta-textual commentary on what’s happening elsewhere in the prequels, then?”

“No. None of that. Why would anyone want to read that? It’s just a pirate comic.”

“But it’s a pirate comic as if it was created in the 1980s timeframe of Watchmen, or maybe some other point in comics history, surely.”

“No. That stuff’s dumb, that’s not why anyone liked that shit in the original Watchmen. It’s a pirate comic. That’s all it is. That’s all that people liked. Pirates. You’ve seen those Johnny Depp movies, right? There you go.”

“Can we have anything to make it relate to Tales of the Black Freighter, other than the fact that it’s a pirate comic? Seriously. Anything.”

“Fine. Whoever writes it can do it in that same purple prose. Happy now?” 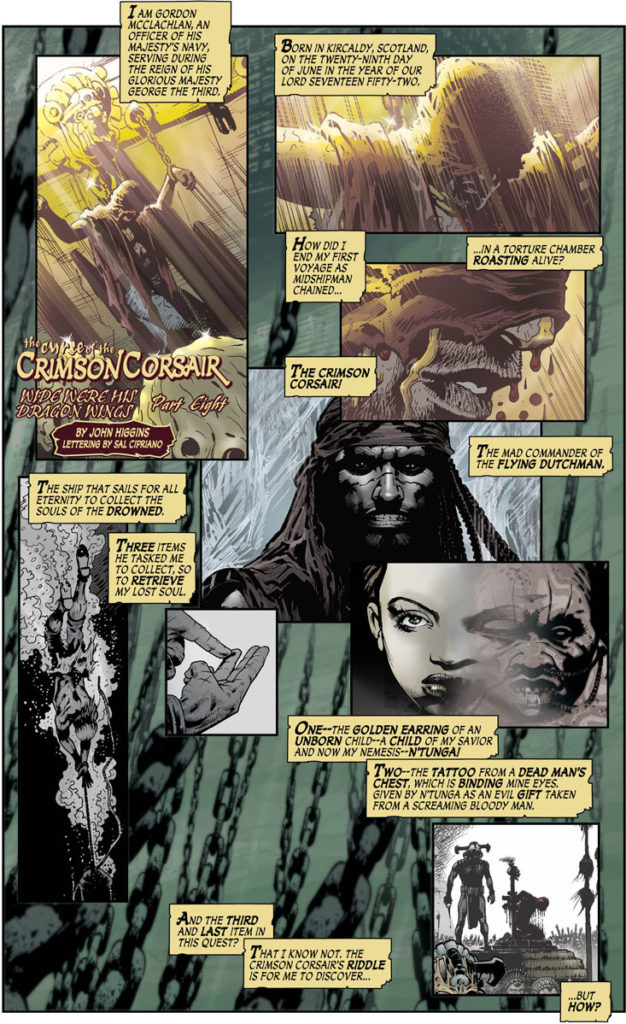 It’s almost impressive just how much Crimson Corsair throws away, in terms of what made Tales of the Black Freighter work in Watchmen. It’s the worst of every world for everyone aside from those who really did just want to read a pirate comic, and even then, it turns out to be a shitty comic. That there’s literally no metatextual element to the entire project genuinely makes it seem as if everyone responsible — creators Len Wein and John Higgins, but also editors Wil Moss and Mark Chiarello — seemed to think that the selling point for the pirate sequences in Watchmen was only the genre, and nothing else. Worse yet, that there’s literally no narrative connection made between what the audience knew of Tales of the Black Freighter and Crimson Corsair underscores that impression; why not even try and connect this project to the characters of the original, even if you’re not trying to address any of the more highbrow (and more important!) ambitions of the sequences?

If that’s the case, though, Crimson Corsair would still disappoint. It isn’t just that the conceit behind the story is older than a shanty sung by a drunk old sea dog — short version: a sailor tries to do the right thing, is thrown off the ship he’s serving on, rescued by g-g-ghost pirates and then has to go on a quest to save his soul — but that everything about the writing, from the horribly overwritten narration to the choices made concerning character and circumstance, feels cliched and, often, offensive. (The introduction of a voodoo priestess with the dialogue, “Ju-Ju Lady, she come!” being a particular lowlight. Later, said voodoo priestess steals a baby, saying, “Ki ka, ki ki kia, I take baby. You not want baby.” This is something that was actually published in 2012, staggeringly.) 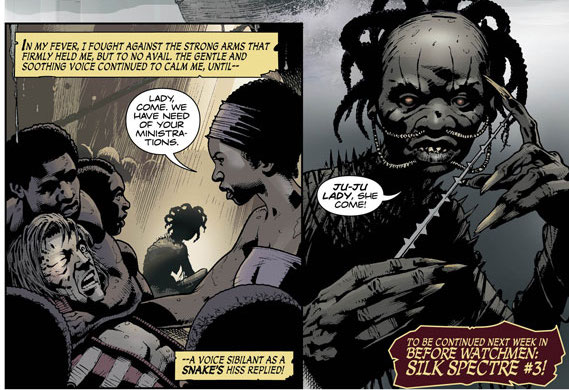 Despite all of this, there’s a sense that a different artist could have staged this in such a way as to make it feel like the EC-era comic the writing appears to want it to be; John Higgins doesn’t offer anything of the sort, however; the layouts are constantly overlapping with no seeming rhyme, reason or page design; the staging is consistently mundane, and the colors monochromatically muddy and indistinct. It’s not just a figuratively ugly comic, it’s a literally ugly one, as well.

Crimson Corsair clearly had some issues in its creation — Len Wein disappears as writer midway through the run, with Higgins replacing him (the shift is, at least, fairly smooth), and the story appears to end abruptly, perhaps suggesting that rumors of a cancelled one-shot that would’ve tied everything up have some truth to them — but there is nothing in evidence at any point of reading to suggest that this is a project that could’ve been great, but went off the rails at some point. It’s a Before Watchmen project that literally has zero to do with Watchmen in any respect other than it being a comic book like Watchmen is, and featuring a pirate, like Watchmen did. It is, in every single respect, a disaster.