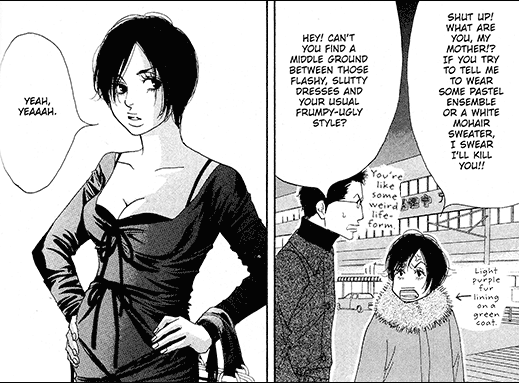 Spoilers: this is not about Fumi Yoshinaga (yet)

Last week in my piece about cinema, I wrote this line, which at the time I liked very much:

Superhero comics are a dream of community, a dream created and supported by very lonely people.

It’s not like I tend to sit around for hours after I write something, dreamily rereading my prose.  Typically, I forget the bulk of what I’ve written once it gets out there in the world.  My brain is a crowded bus, so there’s rarely more than just a momentary feeling of relief at some space opening up (and then the next batch of obsessions climb on, re-jostling everything).  But this line kinda nagged at the corner of my thoughts: a discharged passenger running behind, waving and yelling, because only after they got off did they realize they’d left something important behind.

Are superhero comics a dream of community, a dream created and supported by very lonely people?

To give the idea an aphorism’s towel-snap I pared down any equivocation or context.  Most of the people I know now in comics are not lonely people…I think?  Being in your twenties and thirties, it can feel like everyone’s got their shit together but you, and one of the great solaces of middle age is realizing just how much energy everyone was expending trying to look like they had their shit together (yourself included).  And now, in your forties, with less time left on the clock and less brain power and less patience with your own bullshit, you either can’t keep up the facade anymore or it’s just not fooling anyone now (if indeed it ever did).

And yet, no matter how much people in their forties show you about their lives in the course of a leisurely mid-Sunday brunch, it’s still difficult to gauge how lonely they might be.  Your web browser knows.  Google and Twitter and Facebook know.  But I’ll never know how truly lonely you are.

And—despite me typing this—you’ll never know how lonely I am, in no small part because I myself have no idea.  I am nine and a half years into my marriage and still absurdly grateful for every minute I get to spend with my wife.  I have enough friends that I could hop from meal to meal with each and not end up repeating partners after a week.  And I get to spend close to three hours every other week talking about my favorite subjects with one of my favorite people in the world.

How lonely can I really be?

(And when the hell am I going to start writing about Fumi Yoshinaga?)

I find it easier to look back on my past and talk about it with clarity (if not necessarily accuracy).   I was absolutely a lonely kid back then, and superhero comics were absolutely an imaginary community for me, one in which my power fantasies could intermingle with a feeling of community in whatever way I wanted:  I feel like the common example here is to The Legion of Superheroes or The X-Men, but I think Graeme has done a great job pointing out how much Marvel Two-In-One was about The Thing helping out his pals, and Marvel Team-Up, at its best, really captures the way certain childhood friendships are formed—you meet, you fight, and then comes respect and friendship (by teaming up to throw rocks at that kid you really hate). 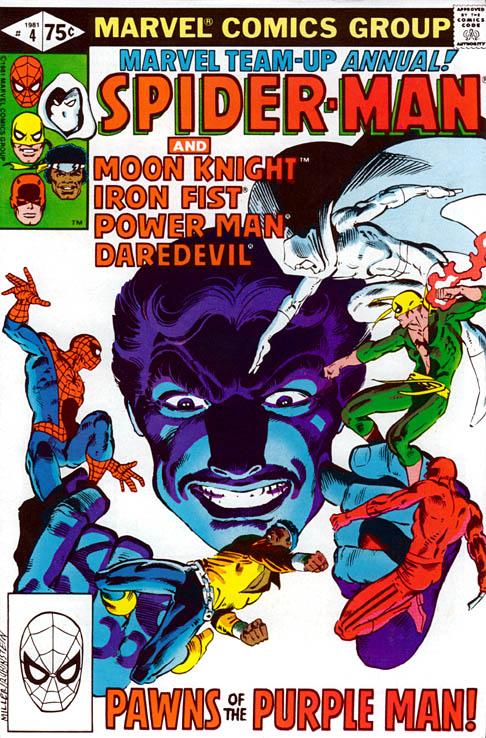 In fact, the genius of Marvel Comics back in my day (ugh, old) was how there was another fantasy of community layered on top of the superhero fantasy of same:  the Bullpen Bulletins, where everyone got an alliterative nickname and was affectionately razzed, and the letters pages, where editors bantered with readers.  By having the courage to step forward and make yourself known, you could become part of this community, join it, be accepted by it. (Which community?  Did it matter?)

And I gotta say—and this is just me—but many, many years later (and not so many years ago), when I was exchanging emails with Mark Waid about the stories he’d bought from me, or chatting up Axel Alonso at Wondercon, or being introduced to Mike Richardson…it didn’t feel like that at all.

Part of that is the crucial difference between the fantasy and the reality—sure, okay, step forward and make yourself known, fine.  But what can you do?  What do you have to say?  What can you contribute?

It’s interesting. I was probably still a long ways off from breaking in…but maybe not that far off?  There were far worse names to drop at Marvel at that point than Mark Waid (who I should point out was 100% gracious in allowing me to do so, and supportive and kind in every very brief communication I had with him) and my follow-up with Axel Alonso, although brisk, caught him just as he was making the big move up to EIC at Marvel.  He was not unreceptive—didn’t go out of his way, mind you, but he did say “oh yeah, email so&so at the X-books and tell them I told you to pass your stuff along.”  That’s a tangible step, you know?  I could now go into my next random encounter equipped with Name To Drop +2.

And yet it was, for whatever reason, terrible. Part of that was just probably the feeling of, man, if I wanted to prove myself over and over again to distracted harried people who are barely pretending to pay attention to me, I’d just talk to my parents.  You know?  And part of it I’m sure is my own hey, fucker, I’m a precious unique snowflake, god damn you! But also,  a surprising amount of it was just I am too fucking old to help you prop up your sagging status quo for this little money.

By engaging in a psyche-up ritual so desperate and unhinged I resembled an enemy boxer in a Rocky movie (slapping myself in the face and balls, injecting myself with steroids made from mongoose blood, asphyxiating a hospital orderly) (I’m realizing I haven’t watched a Rocky movie since Rocky III, and have since confused a lot of it with Cobra), I could come up with a decent story about Wolverine… because at that time you could still tell stories about Wolverine without having to worry too much about the current state of the Marvel Universe.  But what if I had to pretend to care about Gambit? Or had the opportunity to pitch a six page Storm/Black Panther  for an Avengers/X-Men crossover title in which I had to pretend I didn’t hate what they had done to both characters?

And but so:  foisting myself upon the indifferent; injecting myself with mongoose blood; working my ass off so I might get the chance to later pretend I can prop up a status quo I ceased to care about at least  a decade ago?  It all seemed a bit too poisonous, too much living up to the letter of a childhood dream while betraying the spirit.

(In fact, I wonder. I admit I’m not paying a lot of attention, but it seems like Marvel and DC are both spending a lot of time on stories where the superheroes are expending tremendous amounts of energy trying to keep their earth from being destroyed/overrun by another earth, another dimension: all these heroes having to put all their energy into this impossible task, preserving their reality, keeping an invasion of otherness from subsuming them, the man on the wall, etc., etc.  I’m sure that’s just, you know, what Americans tell stories about these days, about zombies and antimatter and some big-ass explosion taking out some sacrosanct object held to be inviolate, and hard decisions having to be made because. you know, 9/11 or at the very least, hey, where did that middle class go again?   But, again, I just imagine all these Marvel and DC creators hustling, hustling, hustling, giving interviews where the phrases “can’t” and “couldn’t” always seem disquietingly prominent—”I couldn’t be happier with the art by [artist]” and “I couldn’t be more pleased” and “I couldn’t be more excited”—as if unable to avoid subconscious confessing that, you know, there is only so much happiness or excitement or pleasure really possible in their particular situation.  And then what comes out of these summits is stuff like: “what if the Marvel heroes suddenly got infected by the Red Skull’s hate rays and all they cared about were selling their pilots to cable networks?” and “So Darkseid destroys the Earth 2 entire universe  just by showing up, you know, just like video games did!” and “what if some old turd just could not stop fixating on Wolverine to the point where Wolverine got so god-damned tired of it he died, he just died?”) 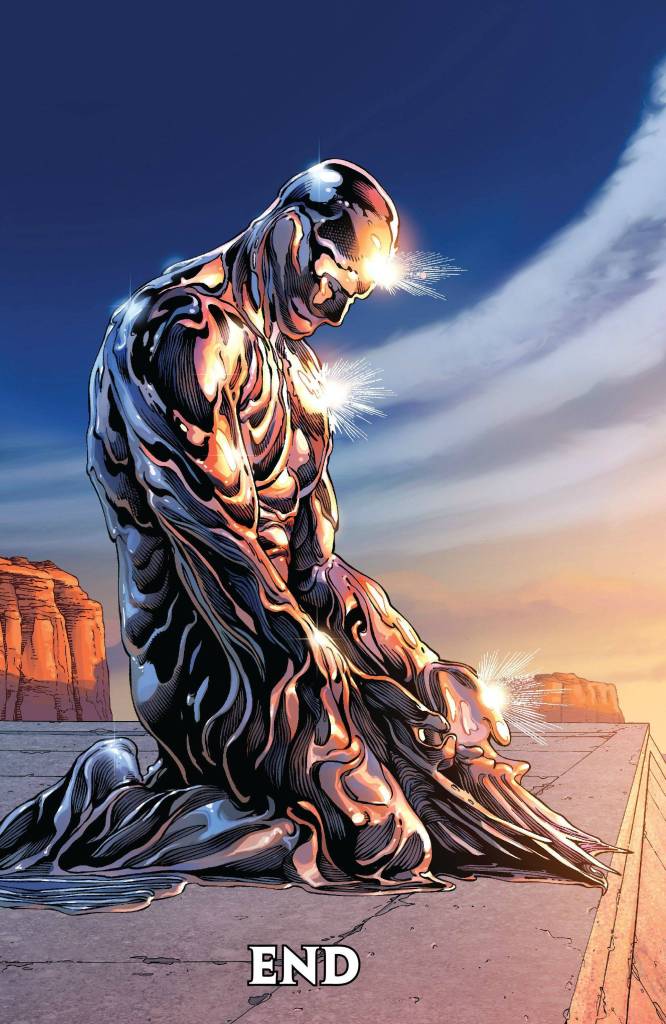 Anyway.  I have to start in on the podcast editing so…here is where I leave us for now, in this very special happy place.   Tune in next week where I maybe go on to do more of what I did last week but better!  Don’t worry, I think it’ll probably get a perkier. (I sure hope so, anyway.)

NEXT:  Planet Manga; the mysteries of shōnen-ai; Fumi Yoshinaga (finally); and more! (Unless there’s actually less.)