Programming Note: If you haven’t listened to the latest Wait, What? episode, stop reading this right now, scroll down and do so. It’s our Secret Convergence on Infinite Podcasts episode, and it’s pretty damn amazing.

I’ve been reading a lot of Legion of Super-Heroes lately, in part because of a stray thought last week where I was surprised that, considering the avalanche of titles All-New All-Different Marvel is bringing and Marvel’s love of tweaking DC, we haven’t seen an announcement for an ongoing Imperial Guard series yet. The Imperial Guard, for those unfamiliar with the X-Men supporting characters, were the Legion to the Squadron Supreme’s Avengers; a group of thinly-veiled analogs to the DC characters that took on a life of their own within the larger Marvel mythology. (That the Imperial Guard were designed by Dave Cockrum, an artist who’d previously drawn a bunch of Legion strips, should be noted.)

But that thought was only part of the reason behind my mammoth — three Showcase Presents volumes — dive into the series; the rest really came from realizing how absolutely enjoyable the series is, especially at the period I was reading. The three volumes I read were Vols. 3-5, which contain Jim Shooter’s first run on the series, Cary Bates’ follow-up, and Shooter’s return — pretty much the Legion output from the mid-60s through the mid-70s, with Shooter taking the book from its cosy, comfortable Superboy-esque origins and trying to turn it into a Marvel book, using his particular take on the Marvel formula as a basis and letting that mix of soap operatics and superheroic melodrama shape what Bates, and then Shooter himself, does in later issues.

It’s a dizzying, wonderfully compelling period, made all the moreso by watching the art on the books go from Curt Swan and Murphy Anderson to Dave Cockrum and Mike Grell, with new costumes that reveal a lot more skin and turn the characters from chaste, well-behaved mini-adults to more sexual creatures, in subtext at least. You can almost imagine the readers of the early ’70s melting down over what was happening to their favorite heroes. 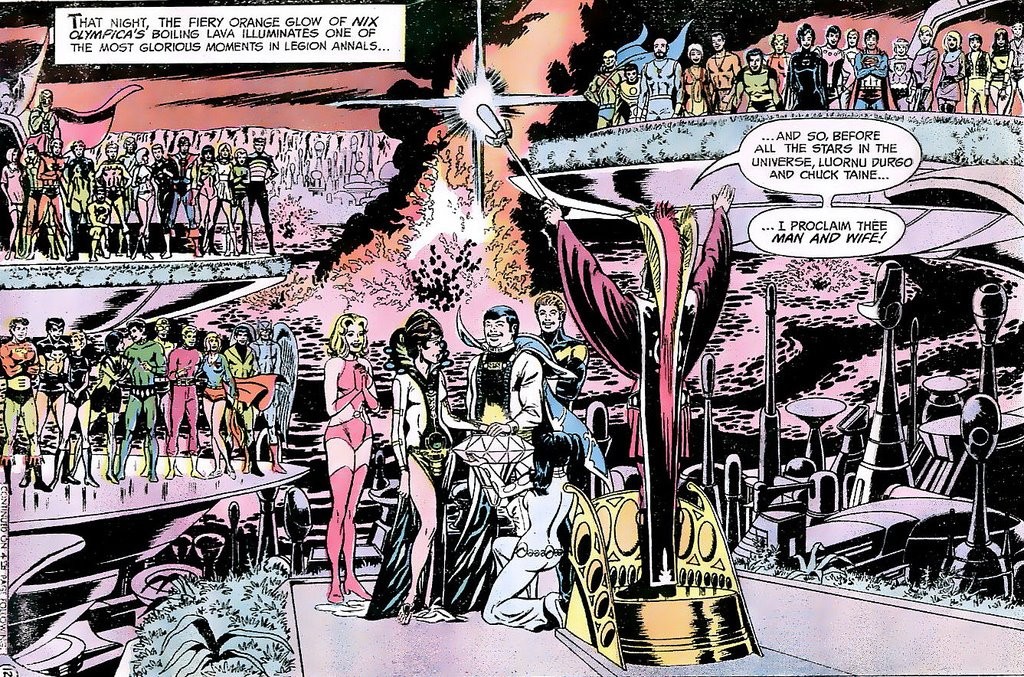 It all makes for fascinating reading, especially watching Shooter — at the time a teenager — bring a teenager’s intensity to a series that is, ostensibly about a group of teenagers: romances are suddenly far more of a plot point in a number of stories, as is an obsession with how dangerous all the new missions are (Ferro Lad dies, a fact that overshadows a number of stories immediately afterwards as if to say these stories are important, dammit) and an authorial tone that owes much to Stan Lee in an effort to sound with-it and popular. Bates refines these elements some — while also penning some unintentionally creepy relationship moments, including Bouncing Boy’s continued excitement over having two girlfriends, thanks to his relationship with Duo Damsel, and writing a story in which Brainiac 5 was so distraught over missing Supergirl, whom he had a crush on, that he build himself a Supergirl sexbot that he then eloped with — while lightening the overall tone in preparation for an older, more savvy Shooter to return for a victory lap.

The series, which ran in Adventure Comics, Action Comics and Superboy for the stories in these volumes, is impressively solid throughout, laying groundwork that will be built on in Claremont’s X-Men and Wolfman’s New Teen Titans as well as in Paul Levitz’s later Legion stories. More than the original Titans stories or the original X-Men or anything else, these were the comics that created the language and rules of teen superhero comics, in fits and starts, with the verve and lunacy that comes from not having to tie in to a wider contemporary universe: need to just decide that there’s a war on that no-one ever mentioned? Easy. Need to hypnotize the entire planet for plot related purposes? No sweat! Even at its most melodramatic and soap-y, it’s amazingly loopy and shameless, throwing both caution and logic to the wind to follow its heart to amusingly dumb places on a whim. It’s difficult not to read it and think, this is what I want more of in superhero comics, and wondering what a modern day Legion could be, given the chance.

I imagine someone like Ryan North killing on it, in terms of writing, with whoever drew it given the chance to invent a whole new visual language for the 31st century, in terms of fashion and architecture and everything. There’s such potential in the Legion to do something that speaks to the superhero genre, the YA space and something entirely itself and different, all at the same time. That the concept is lying in limbo right now — absent from the DC schedule for the first extended period since it was introduced in the 1950s — feels like a tragedy, a travesty, and an oversight. It was, for awhile, one of DC’s leading lights and certainly its most interesting books. I’d love to see it come back and reclaim that crown, somehow.

6 comments on “Meanwhile, In The 30th Century of the 1970s…: Graeme Revisits The Legion”