I can still remember how excited I was to read Marvel Super-Heroes: Secret Wars for the first time, when I was a kid. I can even remember the first time I found out about it, in a text piece in an issue of The Mighty World of Marvel reporting on Spider-Man’s black costume that I read on a cold and rainy afternoon; it said that the series was either going to be called Secret Wars or Cosmic Champions, but that hadn’t been decided yet. 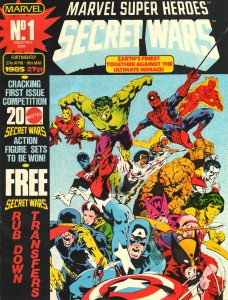 I read the series, eventually, in its UK-reprint form, which meant that the original issues were split across two issues and paired with an increasingly strange selection of back-up material. It started with Alpha Flight, because nothing says “obvious selection for a British superhero comic” than “a second-rate Canadian super team,” but things got weirder from there — J.M. DeMatteis and Alan Kupperberg’s Iceman mini-series showed up at one point, as did Zoids. And yet, I loved it dearly. I was, what, 10 or 11 years old or so, and it was everything I could’ve wanted in a comic: so many superheroes, and so many villains, and that Mike Zeck art! How could I resist?!?

So, when Marvel announced its revival of the title for 2015 at this weekend’s New York Comic Con, the combination of nostalgia and curiosity drove me to revisit the series, thinking “I know Jim Shooter’s Avengers turned out to be terrible, but he couldn’t mess up this so badly that I still have fond memories, could he…?”

I think you can all guess the answer to that one, dear readers.

Let’s do the positives first. Yes, the Mike Zeck art still looks great. He’s one of those artists who I loved (because of this series!) at exactly the right age for his version of characters — most notably Wolverine and Captain America — to be iconic for me; they just look “right” in a way that other artists can’t manage. And yet, re-reading the series as an adult, I was struck by how odd his art was for the time; more cartoony, and bold in a way that happily reduced characters to little more than balloon-people when the scale or scene needed something like that to work. There’s a lot of Kirby in there, but not in the finish; it’s all in the structure, and everything that happens underneath the surface. It only makes sense that Shooter grabbed him for the book, because he provides art that “feels” like Marvel in some strange, indefinable way, even if he never quite seemed to understand female anatomy (or, perhaps, because of that…).

The basic concept, too, remains a wonderful one, if an entirely unoriginal one. For me, it’s a very 1960s Star Trek concept, specifically: a being of omnipotent power kidnaps heroes and villains to try and understand such Earth concepts of good and evil — it’s basically “The Savage Curtain” from the third season of the 1960s show, but with superpowers, but I’m sure there’re earlier iterations that I’m not familiar with. Nonetheless, it’s solid and provides not just a McGuffin for the series, but also a reason for the “Wars” in question to be “Secret”; no-one else on Earth even knows they’re happening. 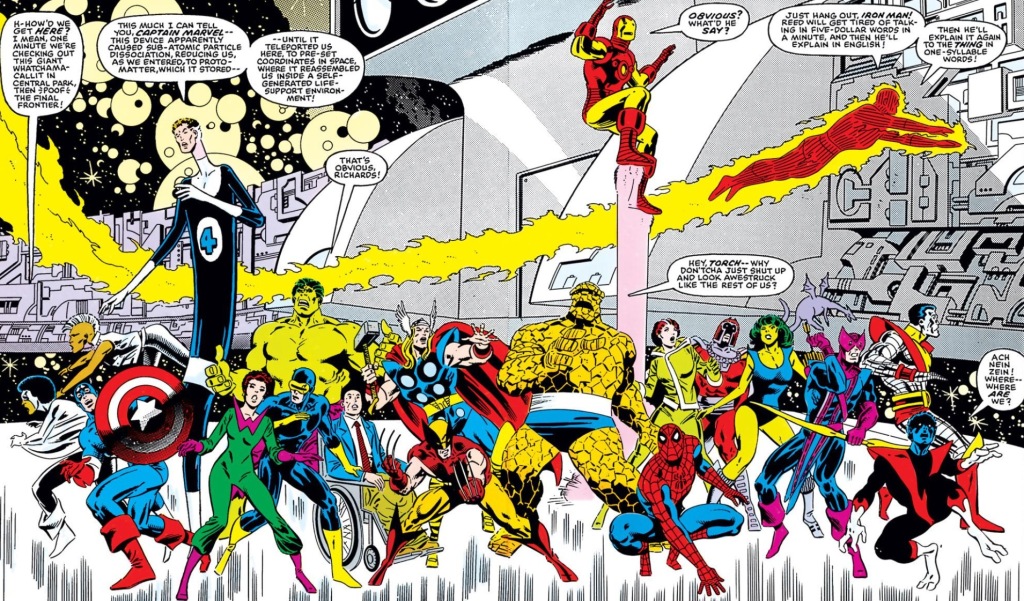 Unfortunately, that’s about it for things to really love in the writing as an adult. While Secret Wars bypasses most of the misogyny of Shooter’s Avengers — although the Wasp is just appallingly portrayed throughout, and the subplot surrounding alien healer Zsaji is… problematic at best (She makes men fall in love with them when she heals them, because… well, okay, I got nothing outside of Shooter’s male paranoia. Worse yet, having created that idea, he then proceeds to do nothing of interest with it, choosing instead to opt for cheap soap operatics) — it’s still not particularly any good; characters’ actions are defined by the plot’s requirements, and their dialogue is interchangeable exposition for the most part. The extensive cast is almost entirely wasted — the villains especially — underscoring the cynical reading that they were only there to make up the numbers for later toy development, and what little plot beyond “They’re on an alien planet, they fight” there is is actively stolen from a Lee and Kirby Fantastic Four storyline.

More than anything else, re-reading Secret Wars didn’t make me feel as if it was bad, per se — although it definitely is — but that it was lazy and had little ambition beyond shifting product. Despite the potential the kid-me saw in the basic idea of all these characters in the same place at the same time, holy crap, the finished series is almost impressively humdrum, happy to go through the motions of creating something that has no lasting impact or reason to exist beyond setting up storylines in other series and selling lots of comics.

In that respect, it feels entirely appropriate that it’s being revived for next year’s Big Marvel Event. In so many ways, it’s very much the spiritual father of everything that these storylines have become for both Marvel and DC.

6 comments on “You Can’t Go Back to Battleworld Again: Graeme Revisits The First Secret Wars”