The world is filled with cheap highs, and getting on a manga kick is arguably one of the best.  For example, I finished reading Volume 7 of High School Debut last night on the ride home, and the only thing keeping me from digging into Volume 8 is  that I haven’t picked the book up from the library yet.  But when I do? I already have volume nine in tow so LOOK OUT WORLD. I like American comics a lot, I really do, but having several volumes of a manga series you enjoy under your arm is like, I dunno, having a magical fireplace pop up in your home or a pricey bottle of whiskey in the cabinet: no matter what happens over the next few days, you can be relatively sure you’re going to finish the day feeling warm and relaxed.

Unfortunately, like a lot of of cheap highs, getting on a manga kick means you find yourself looking up at some point realizing you don’t really know what time it is and being aware you’ve eschewed other responsibilities but not really being sure what they are. I mean, I went to the comic store on Wednesday and walked out with a small handful of books?  But I have yet to in any way acknowledge any of them.

So but if you like reading an old white ignoramus talk about manga–and not even High School Debut, mind you, but the first mega-volume of Die Wergelder and the latest chapters of Sun-Ken Rock, this is your lucky day!  Join me after the jump for exactly that! 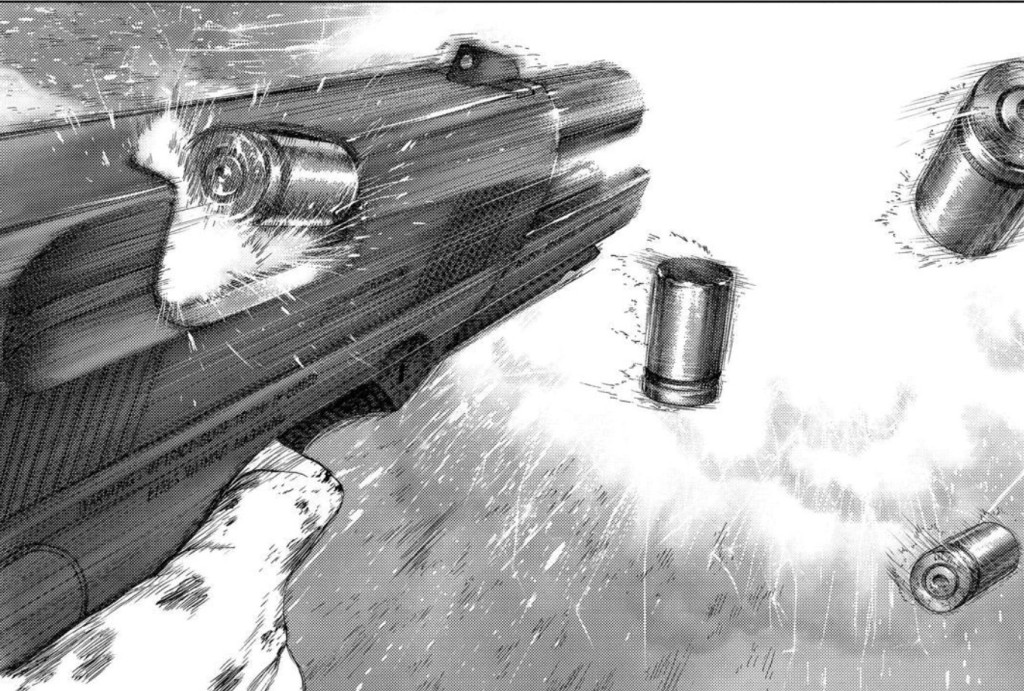 For those keeping tabs on the epic that is my reading of Sun-Ken Rock on Crunchyroll, I literally finished Chapters 167 & 168 just now, which I figured would extend the “it’s all over but the shouting” vibe as Ken and love interest Yumi had finally triumphed over her father’s unbeatable yakuza group, The White Dragon Clan. We’d get a few more pages of “you don’t understand what it means to be good!” posturing with Ken (accompanied by all that top-notch close-up pointing and fist-making Boichi and his team are so good at), you’d get some groveling from the dad so he could move in close with his hidden knife, BOOM, a last minute moment of danger, and then DOOM-KRRRSH, Ken kicks him out a window, or BAM-KRRRRRSH, Yumi has to choose between shooting her dad or letting Ken die but of course she loves Ken so she shoots her Dad and he flies out the window.

I was not prepared for the third option, which is that Boichi is just stone cold insane? And that instead [REDACTED] chose to [REDACTED] because [REDACTED] and wants to [REDACTED], and therefore [REDACTED]? Which literally flies in the face of, like, three thousand pages of previous characterization?

Late act shock twists are like putting all your chips on a single number at the roulette table: sure, if the creator pulls it off, they win big-time.  But sadly the odds are much more likely you’ve taken your entire investment and thrown it all away.  I was pretty okay with a nice orderly stacking up of the chairs, calling it a day, and continuing to recommend SKR to readers who weren’t getting enough of the USDA of crazy. Now, my problematic fave of last year appears to have become even more problematic, the most recent chapter piling on both sentimentality and goofiness just pages after you got [REDACTED], its tonal opposite.  It’s like watching a farmer try to plant their favorite crops in the fields they just salted. 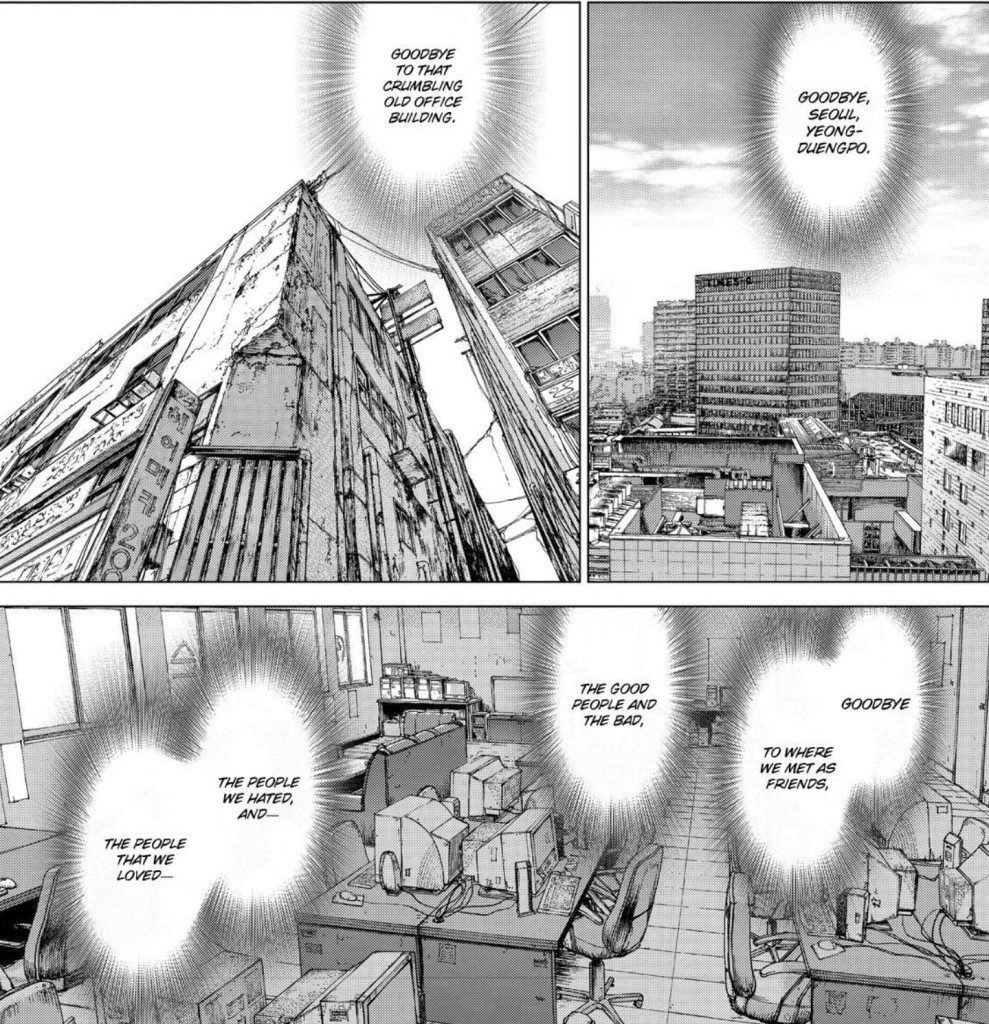 What I do appreciate, however, is because there’s so little translated news on Sun-Ken Rock, I really don’t know if Boichi is setting the scene for a sequel series or continuation or what. And I do see at least one out where they can retroactively steer that turn into a “gotcha!” moment but…I’m not sure if that would have any punch considering how much emotional investment just (pardon the expression) went out the window.

The audacity of it really did provoke the hot take above–and that sort of shocked laughter some gives out when they’ve been pranked, right before they yell, “you dick!” in disbelief–but…not cool, Boichi.  Not cool. 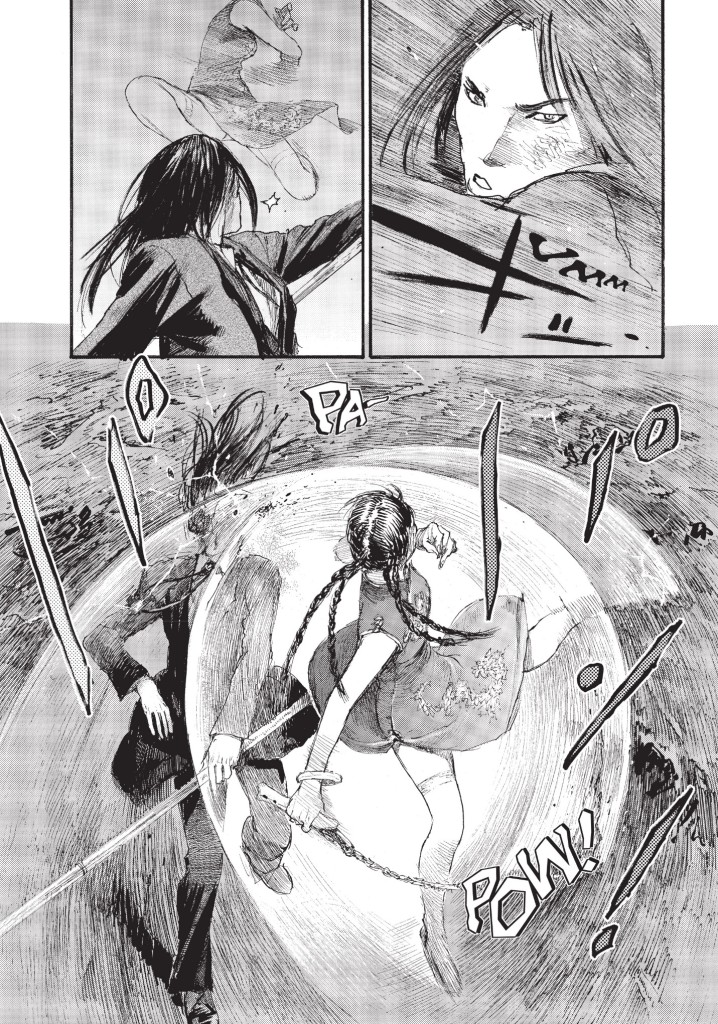 DIE WERGELDER VOL. 1:  My hot take: I LOVE THE KILLER IN THE QUIPAO, BUT WHAT THE HELL IS HER NAME?

Meant to talk about this on the most recent Wait, What? but we got sidetracked with all that Teen Titans stuff? It would’ve been pretty hard to make a decent segue from “oh right, the Baxter series really was just a re-hash of the first Trigon storyline, wasn’t it?” to “that reminds me of that scene in Die Wergelder where that one woman literally rotates that guy’s face 180 degrees.

I’m a little intimidated by saying much about this book other than the generic “I like it it was good” since I got turned on to the book by Sarah Horrocks writing about it, and when Horrocks writes about something, there’s usually such a strong baseline of knowledge and aesthetic consideration involved that following her just seems dumb.

But since this is my first book by manga-ka Hiroaki Samura, I did want to say how enjoyably offbeat it is.  As Horrocks mentions, the book is heavily indebted to the Pinky Violence and exploitation genres, but it strikes me as a modern take on them that’s much looser and sentimental about its influences than, say, Tarantino’s Kill Bill.  After a queasily engaging opening chapter, Samura plunges us into the plight of Shinobu, an entirely different character entirely.  By the time Shinobu starts to realize just how deeply in over her head she is–where the heist gone wrong isn’t what it seems, but what it actually is is also in the process of going wrong–we’ve only made the connection a few pages before…and by that point we’re well over a hundred pages in.

[Sidenote: I still haven’t seen The Hateful Eight but this appears to be my year for giving Tarantino–as a Miller’s Crossing character would say–“the high hat.” I saw The World of Kanako earlier this year and walked out of it trying to figure out how to say, “Tetsuya Nakashima made a more thematically solid Sergio Corbucci-influenced Tarantino movie than Django Unchained, Tarantino’s Corbucci-influenced Tarantino’s movie.] 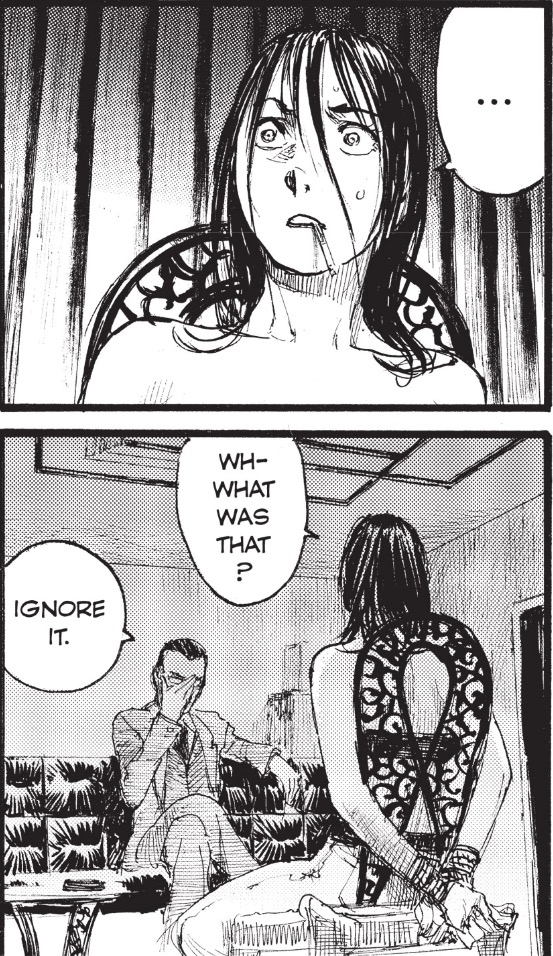 Like Tarantino, Samura uses the grim and the jovial to both indulge in stuff he likes and keep audiences on their toes and, like Tarantino, a lot of the success depends on the charisma and talent of “the actors.”  Most of the male characters are generic pieces of whatever, but Samura’s female characters are vividly drawn with what looks to me like very loose but assured pen work, giving them a strangely corporeal texture.  My favorite in this regard is easily Shinobu who, despite being her quick intelligence, has the slouchy body posture of a lazy slob, Samura’s pen adding just the right number of unneeded lines to accentuate her slovenliness. 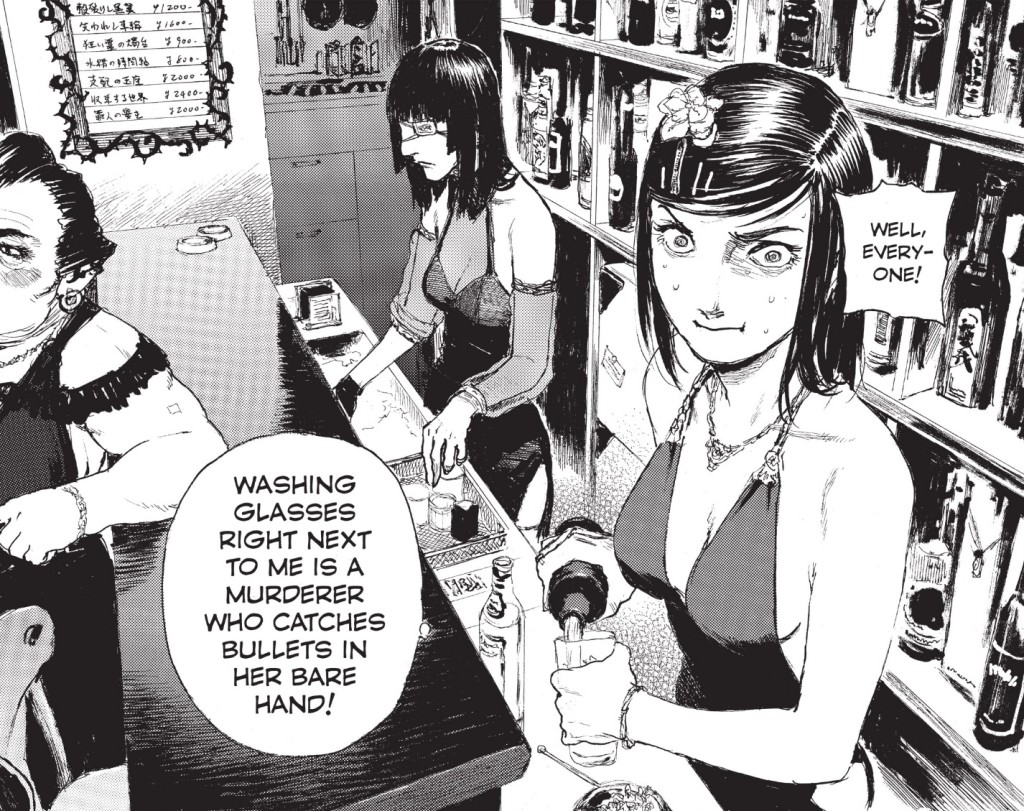 It’s pretty easy to say it’s not for everyone–I can’t imagine handing this to Graeme without him hollering about the mermaid fucking, for example–but if you like you feeling off-kilter because of some cleverly off-beat storytelling instead of [REDACTED] choosing to [REDACTED] because [REDACTED] and wants to [REDACTED], and therefore [REDACTED]?  Then this is a neat, nasty choice.

2 comments on “Mind The Mindless Pleasures: Jeff on Sun-Ken Rock and Die WerGelder”