The fact that DC’s Robin War crossover and Marvel’s Secret Wars mega-event-crossover ended on the same day is one of those small ironies that people who write about stuff on the internet (i.e. me) really like. Whoa, these comics both had titles ending in “war” and they were both crossovers and they ended on the same day! That’s a perfect reason to compare them!

But it’s not the only reason to compare them. While these are similar in the surface level (in that they’re both crossover comic book events tying into multiple series in mainstream superhero comics), they could not be more different in approach, nor in effectiveness. But I’m getting ahead of myself. Let’s start this off with some quick metrics, because it’s 2016 and people love, like, analytics and numbers and math and stuff.

(I should also note that, while I keep everything generally spoiler-free as far as the finales go, the images here do imply and/or reveal some plot points from the earlier issues of Robin War, specifically the end of Robin: Son of Batman #7.  So if you’re not caught up yet and don’t want to know what happens in the run-up to this finale … um … don’t look at the pictures, I guess.) 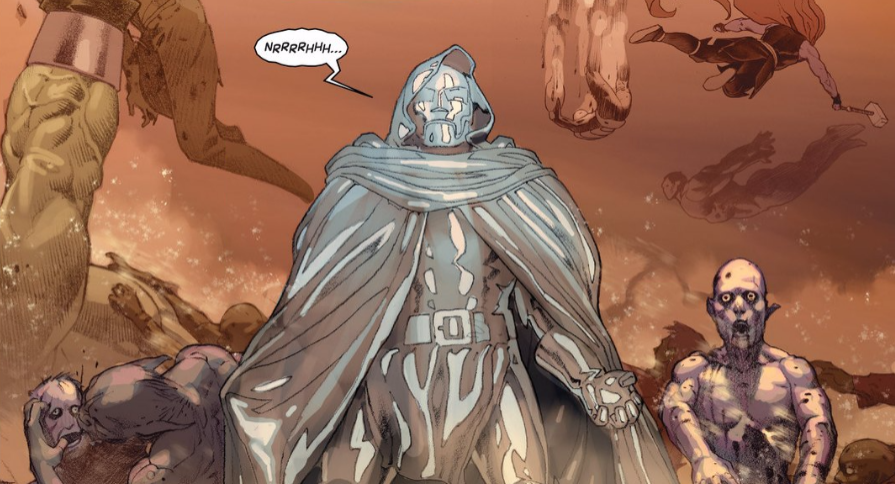 TechTimes went ahead and did the complicated math on Secret Wars. I’ve pasted a few of the relevant numbers below, but it’s worth clicking through to see even more really appallingly large numbers! (The date on the TechTimes piece is September 23, 2015, which means it was after the announcement of Secret Wars expanding to a ninth issue. Also, the “entire storyline” cited below includes the “Time Runs Out” issues of the Avengers titles but not anything extreme [but arguable!] such as, for example, “all of writer Jonathan Hickman’s previous Marvel work”. Beyond those notes, I haven’t double checked any of their numbers. Journalism!)

For Robin War, I’ll do the math myself:

That’s the objective stuff. Now let’s move on to some more subjective questions.

Can you highlight the similarities between how these two events play in the context of their larger universes? Maybe by way of comparison to some other kind of pop cultural experience?

Both of these series represent the culmination (or continuation?) of ongoing plots established elsewhere — they’re both the equivalent of season finales for TV shows, only if you braided together the finales for multiple TV shows into one. Robin Wars pulls together developments from all of the Robin-related DC books and (presumably) spins their next storyarcs in a wholly new direction based on the events in this series.

Secret Wars, on the other hand, serves as a finale mainly to Hickman’s run on Avengers and New Avengers (and, to a certain extent, sister books like Avengers World), but also as a finale to his years-long Marvel uberplot, including work on Fantastic Four, FF, some Ultimate stuff that I didn’t read, and SHIELD. But it really is a finale for Hickman, who appears to be done with Marvel for the moment, so the effects of this series will be felt broadly through the entire Marvel universe, but specifically kinda nowhere.  That is, there are plot points seeded for various upcoming Marvel books (several of which are no longer upcoming, having come out while SW was going through one of its many delays), but there’s no real feel that the story that led to and through SW will continue in any broader sense.

How about metaphors? Are either of these crossovers metaphors for anything?

Kinda. Robin War plays on a background that’s allegorical to the recent uptick in awareness of police shootings and beatings, but ultimately turns into a story that’s more focused on what being Robin means, how various Robin types interact with each other, and also on the secret sect of people in owl masks that rules Gotham in secret.

Secret Wars, meanwhile, seems to me to be a metaphor for how frustrating it is being a comic book writer working for a mainstream comics company, trying to find something new to do with the old toys while constantly having other creators getting in your way and altering your plans. (I’m trying to walk around spoilers for the final issues of both of these, but there’s a bit toward the end that is literally about creating new universes and that features the lines “No more superheroes for a while. Just science.”  All it needs to make it more overt is an editor’s note box with a link to buy the first few trades of Hickman’s science-y Image titles.)

It’s also possible that there’s no metaphor and that the subtext is just that Jonathan Hickman really liked Game of Thrones and Marvel asked him to put the toys back when he was done. Tough to say.

These are big events, right? How do their long-term effects compare?

The answer here is sort of a function of the answer to the first of these questions. Perhaps because it’s being guided by the writers of the various relevant series, Robin War‘s effects are much more granular. A new (and fascinating) relationship blossoms between two unexpected characters. One of the main characters undergoes a drastic change in status quo that will presumably completely alter the book in question. The entire premise of We Are Robin is revisited and, to a certain extent, clarified.

Some of these changes will presumably be reflected in the broader DC universe, but none of them are foundational.

Secret Wars, meanwhile, simultaneously makes more impactful changes while having them be less dramatic. The result of the series is (as we’ve all known from the post-SW books that have already been released) a rebuilt universe with some significant changes from the previous iteration. But (a) we don’t know much more about what those changes are, and (b) there appears to be no overt in-story direction to them, so they’ll just be whatever the individual writers (and/or Marvel editorial) decides. What this fundamentally means is that (c) nothing that occurred in Secret Wars, or in its tie-ins, or in Hickman’s entire run, “matters” in any sense. It could’ve been any series of random events leading to a reboot and very little of the post-SW world would be different.

What about art? Why are you only talking about writing?

Art is the one area where I can call Secret Wars a clear winner — it was treated as a Major Event Book, and drawn accordingly: Esad Ribic’s work is beautiful and intricate, clearly created to make for a glorious collected edition. It’s a bit stiff in places, as I’ve noticed before, but it is undeniably lovely work, and effective at telling an at-times-potentialy-confusing story.

Robin War, on the other hand, features the work of multiple artists, from book-to-book in the main story and from page-to-page in the bookend issues. It looks much more like a series of regular DC comics, for better and for worse. I found myself liking the slightly looser, more ragged feel–it made the book seem pulpier, and therefore easier for me to forgive its missteps, whereas the more self-consciously arty approach in SW just made it feel all the more like a book that took itself much more seriously than I was able to.

Much of this seems of a piece with things you’ve written about these books before. Did the final issues change your mind about anything?

Not really, honestly. I thought Robin War‘s ending was more satisfying than I’d feared it would be, while Secret Wars‘ failed to redeem the run-up in any of the ways I’d hoped, but ultimately … yeah, they were just same as what preceded them, only moreso. 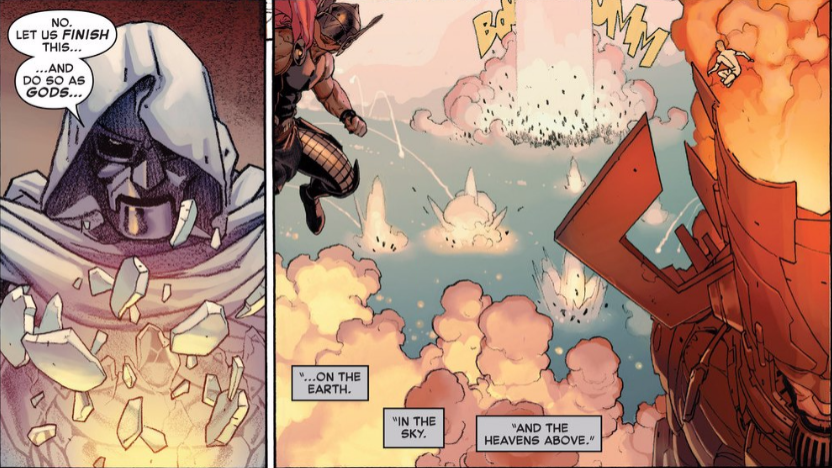 Come on, though. Is this actually a fair comparison at all? The scale of these things is totally different.

This is the one I keep getting hung up on. Am I really only comparing them because they both have “war” in the title and they finished on the same day? That’s an awfully thin hook to hang this much complaining on, right?

But here’s the thing: these books should, theoretically, both have the same high-level purpose: to make me want to buy more of the company’s books. And they use a similar approach for that, mashing characters together around a (theoretically) major event. They’re both, as noted, mainstream superhero comics from major publishers.

And in the end, here’s the result: for a much more reasonable investment of time, I came away from Robin War very excited for the next issue of Grayson, more curious about We Are Robin than I’ve been since issue #2, and even intrigued about how Robin: Son of Batman might handle the fallout.

I came away from Secret Wars having decided to wait for Unlimited on almost everything Marvel is currently publishing, and not even all that excited to read it once it gets there.

One event increased my interest in a couple books that I didn’t care about at all; the other disrupted a years-long addiction to monthly purchases from the company that I’d generally have thought I enjoyed more. Maybe it’s a tautology, but to me that result makes the comparison worthwhile in and of itself.

Maybe once the post-SW Marvel Universe gets fully into gear and the debacle of SW recedes a bit, things will look different to me, but for now I’m pretty much just excited to see what happens in Grayson #16.

6 comments on “Make War No More: Matt On The Endings Of Robin War And Secret Wars”