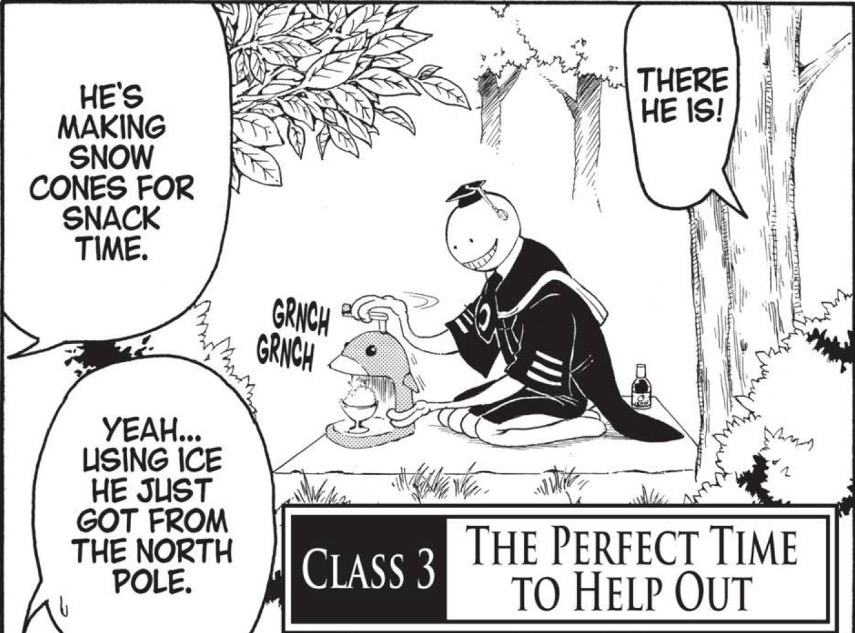 From the Department of Grr:  So last week Viz had a digital sale or two.  To be more precise, they had two sales at Comixology, one for Shojo Beat titles (which is, more or less, their girly romance books) and one for Viz Signature (which is, more or less, their mature reader titles).  And they also had a sale at their own digital storefront for their Shojo Beat and Viz Signature titles that ran the same time.

Now, Viz’s iPad app is, technically speaking, pretty darn nice.  Of course, it’s naturally set to read from right to left, it seamlessly handles moving between single page layouts in portrait mode and double page layouts in landscape mode, and it has a bookmarking function that I wish every app had (both Sequential and 2000 AD’s old app have one as well). I prefer it quite a bit to the Kindle app, which in my experience had problems with extra-wide gutters on double-page spreads, no pinch to expand function, etc., etc.

But there’s one thing their iPad app doesn’t have which I think is kind of a big deal:  consistency.  You can buy just about every manga Viz has in print via their digital website….but that doesn’t mean you can read it.  Years ago—maybe in year one or two of my Shonen Jump subscription—I threw down some cash on a few books…only to discover after the fact the books I’d bought (the first two volumes of Dorohedoro) I couldn’t read on the app because of their mature content.

I’d bought books I could only read online in a web browser.

To quote the cool kids of yesteryear: TEH SUCK.

So yeah.  I was a little bummed I missed the sales on Comixology (which inconveniently listed neither start nor end dates) because I knew I could actually read the books I bought on my tablet of choice where and when I wanted.  Also not so great,  some series at Viz (like Detroit Metal City) started on sale at Volume 1, whereas on Comixology, the earliest volume on sale was Volume 6 or 8 or something.

According to this article, the difference appears to be that that books that are actually rated ‘M’  for Mature can’t be allowed on the app or Viz loses its 12+ rating, and books like Solanin  and Cat Eyed Boy are rated T+ for Teens.  So why doesn’t Viz create a mature readers version of the app, either with or without the storefront?  I dunno.  Maybe I’m missing something but doesn’t it seem like most of the hard work has been done in creating an app that syncs with your account and all that?

Between that, the weird disparity in volumes offered for sale across platforms, and what previously had been a pretty low-key warning that mature titles were only available in a flash browser (it’s gotten better since), I feel Viz is being disingenuous with their approach to digital manga.

Even though my checkbook is happy I missed out on the Comixology sale, the part of me that digs manga on my iPad is sad.  Because as much as I love Viz’s titles, I don’t really feel like buying any of them for their app if I can’t read all of them.

There.  Now that the griping is out of the way, feel free to join me behind the jump for brief reviews of Assassination Classroom, Haven’t You Heard? I’m Sakamoto, and a very late Fuuka update. 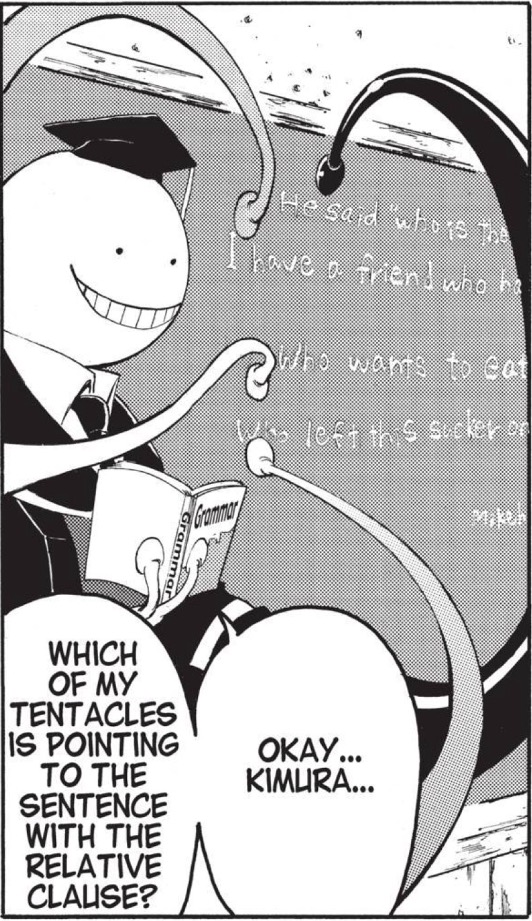 ASSASSINATION CLASSROOM, VOL. 1:  During the Shonen Jump sale at Comixology, I grabbed a few volumes here and a few volumes there:  now that I’ve read both, I’m cursing myself for picking up two volumes of I”s (a romance triangle built around the manga-ka’s obsession with delivering the highest ratio of panty shots to pages) and only one volume of this manga by Yusei Matsui rather than the other way around.

In its way, Matsui’s manga is as shameless as I”s but its first chapter is as dedicated to as high a ratio of absurd story hooks as I”s has of teen girl’s nethers:  in the first few pages of Assassination Classroom, we see a junior high classroom being taught by a smiley faced, multi-tentacled monster, and then every student in the classroom whipping out guns to open fire on the teacher.  From there, Mastui piles on the hooks:  The classroom is for dead-end kids the school’s given up on!  The monster has destroyed the moon!  And in one year, he’ll destroy the earth!  And the government has promised a ten billion yen award for any student who can kill this nearly invincible monster!  (A monster who wants to spend the remaining year teaching these kids.) Can a classroom of losers prove their worth—to the world and themselves—by killing their teacher?

I read this first chapter in awe, as Matsui fearlessly pushes the dark humor of the premise to the fore, then adds the final hook:  the monster, who the students name Koro Sensei (a pun on “koro-senai,” which means “can’t be killed), is, of course, the best teacher any of them have ever had, dodging deadly knife blows while encouraging them to become better assassins, better students, and better people. That’s right, running through all the dark humor is what I guess can best be described as a sentimental pisstake on the saintly teacher trope. 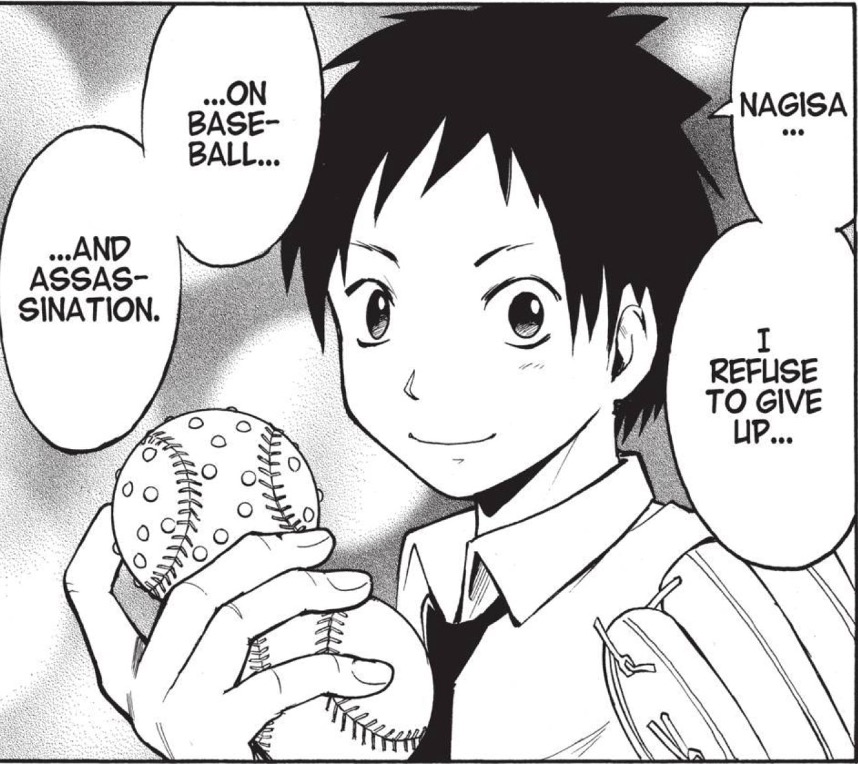 Even if, unlike me, you have no interest in mulling over the book’s subtext (trenchant metaphor for the disenfranchisement of today’s youth?  Scabrous side-eye on public education?  An allegory about the generation gap?), it’s still a high-octane read.  It’s far from perfect—by the end of Volume 1, it looks like Matsui has little to no interest in developing the students into actual people—but part of the joy of Assassination Classroom is seeing a strangely untenable idea for a manga series become exactly that, and for the moments where teacher and student bond through a nearly successful murder attempt. I can’t even imagine how the title has managed to run for three volumes, much less three years.  But I’m really looking forward to finding out. 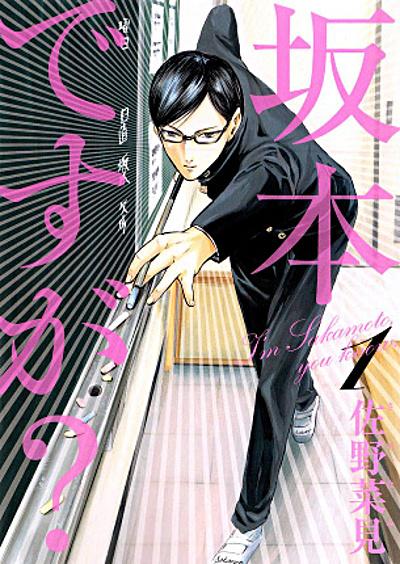 HAVEN’T YOU HEARD? I’M SAKAMOTO:  A fine contrast to invincible teacher Koro-Sensei might be Sakamato, the student protagonist in this first volume of Nami Sano’s gag manga. Although he looks normal, Sakamoto, like Koro-Sensei, might not be human (one of the chapters in this book ends with him muttering, “Humans. Interesting species.”) and he’s possessed with a limitless number of secret skills that make him infuriatingly invulnerable to the endless number of bullies surrounding him.

It’s a fun concept, and Sano feels more free to throw in whatever dopey gag that comes to mind.  But unlike Assassination Classroom, where each chapter left me wondering where it could go next, each chapter here uses the same format—Sakamoto getting the best of some different species of schoolyard bully—for its riffs.

I have to admit, with its generic looking art and insistent steering toward complete absurdity, all Haven’t You Heard, I’m Sakamoto really did for me was make me nostalgic for Cromartie High School, Eiji Nonaka’s comedic triumph of a high school manga that pushed generic art and complete absurdity into a jaw-droppingly perfect gag manga.

I’m super-glad Haven’t You Heard? I’m Sakamoto got published: most of what I come across falls into the manga triangle of Viz’s super-polished shonen/shojo, Digital Manga’s yaoi, and Vertical’s iconoclastic high-end stuff.  But I don’t know if I need to read more than one volume of it.  Now if you excuse me, I have to see what kind of used prices later volumes of Cromartie are going for on Amazon…. 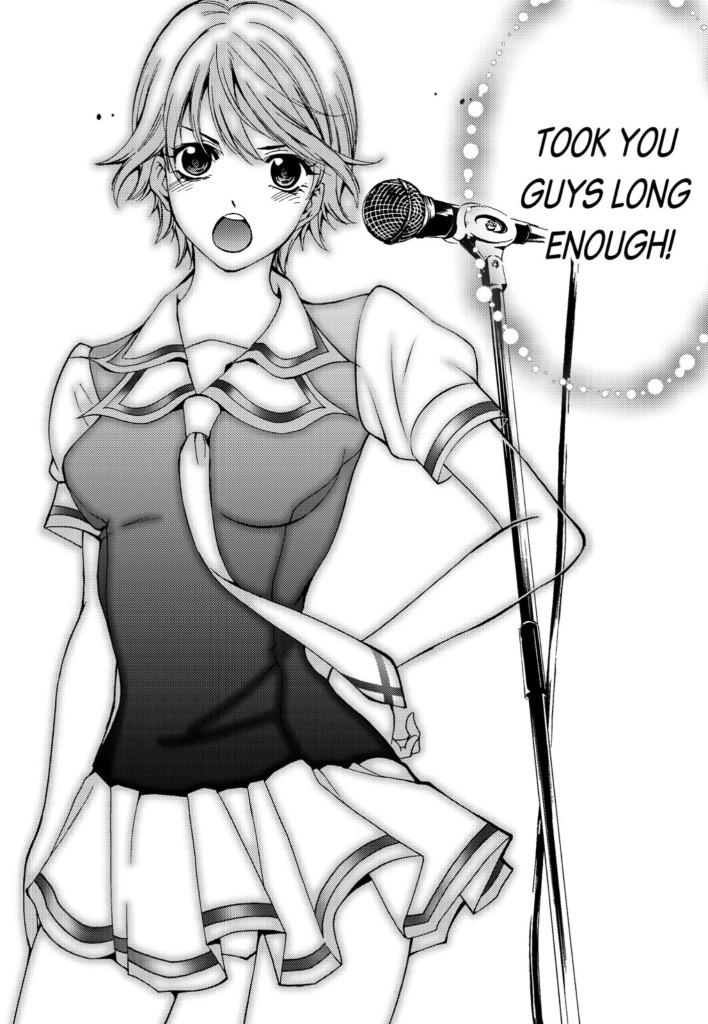 FUUKA:  Meanwhile, over in the pages of Fuuka, the “boy and girl meet cute, slowly fall in love, and then the girl Fuuka suddenly dies, leaving the boy obsessed with forming a band to play Budokan” manga, the end looks like it might be near, more from the lowering boom of reader disinterest than any kind of master planning on creator Kouji Seo’s part.  After all, in just a few installments, protagonist Haruna has gone from the challenge of fighting to fill the seats at a bottom rung club to being invited by the mysterious band Rabbitz to open for them at Budokan itself… because the mysterious lead singer of Rabbitz turns out to be Koyuki, Yuu’s childhood friend, who retired from becoming a famous J-Pop idol so she could becomethe anonymous leader of a rock band.

Of course, after spending months not reading new installments on Crunchyroll, I caught up by reading six chapters in a row  and still found myself at what may very well be the final cliffhanger:  Haruna and band emerging onto the stage of Budokan where they are greeted by ghost Fuuka.  Yes, chances are great Fuuka is merely a manifestation of Yuu’s love for her but I’m still hoping Seo throws caution to the wind and gives us an actual ghost playing actual ghost guitar and complaining the soundboard isn’t picking up her ghost amp.

But maybe I’m wrong and this is one of those occasional big ploys a story breaks out for the manga equivalent of sweeps week, and the title will run for another 300 chapters. In a way, as much fun as it can be to read manga in volume-sized chunks—and even if buying it digitally isn’t nearly as fun—there’s still something to be said for reading manga as it’s published and getting a high-wire act energy you never see quite as up close as you do with comics.  Fuuka is much more of a mess than either Assassination Classroom or Haven’t You Heard? I’m Sakamoto, but with any luck I’ll be following it to the end.