I saw Star Wars: The Force Awakens at 10:30 p.m. on the Thursday night it hit theaters. I would estimate that I have spent roughly 25 minutes out of EVERY HOUR SINCE wanting to talk about the movie. I tried to convince Jeff that we should do a Roundtable about it, but he is some sort of weird monk who, as of Tuesday this week, HADN’T EVEN SEEN IT YET???!?, which strikes me as the very definition of madness circa December 2015.

He suggested that I just go ahead and write about it myself, but I don’t really have much to add to the 739,000,000 words that have already been churned out about it and so was just going to let it drop (where by “let it drop” I mean “write about something else while reading theories about the new characters in a separate tab”), and then I read <b>JLA #6</b>, written and drawn by Bryan Hitch, and I found my way in.

PLEASE NOTE: There will be spoilers for Star Wars: The Force Awakens after the jump. If you are part of Jeff’s weird monk sect and haven’t seen it yet, hold off clicking through for now. Come join us once you’ve caught up.

(There will also be spoilers for the JLA issue, but … really, no one’s staying off of Twitter to avoid hearing about JLA #6.)

So. As you’ve probably gathered from my breathless introductory ramble, I really dug SW:TFA. I thought Daisy Ridley gave one of the best debut performances I’ve ever seen —  as a film viewer, there’s nothing quite like that moment of seeing a Genuine Movie Star emerge unexpectedly. I thought the other new additions — Oscar Isaac and John Boyega and Adam Driver — were similarly head-and-shoulders beyond anyone who appeared in any of the prequels. The action was brisk and entertaining, the bad guys were cartoonishly bad, the good guys saintedly good, the hero moments hit the way they were supposed to. It was everything I liked about Star Wars as a kid, given a nice polish and repainting and set back onto the track.

My only complaint is, of course, that it was very reminiscent of Episodes IV, V, and VI, verging on being a mashup of the three films. I’m not going to recount how in detail, because it’s not like I’m the first, or hundred-and-first, or thousdandth, or millionth person to make this observation.

As Todd VanDerWerff writes, “By far the most consistent criticism of Star Wars: The Force Awakens has been that it’s a baldfaced rip-off of the original Star Wars.”

(As it happens, I don’t think TFA is actually a mashup of IV-VI. I think it’s a stealth replacement for VI. It undoes much of the work done in that film, restages parts of it in echoes, and basically says “Return of the Jedi only works as a last episode. Here’s what Episode VI would’ve been if they had planned to make movies indefinitely.” I think it’s significant that there are no Ewoks to be seen in this movie, in any of the crowd-of-aliens shots. But that’s kinda ancillary to the point I’m making here.)

Klein’s article is entitled “What Star Wars: The Force Awakens learned from comic books,” and it’s the one that came to mind as I was reading JLA #6.

If you don’t feel like reading the piece in its entirety, the quick summary is this:

The reason TFA gets away with its … um … strong debt to the original trilogy is because it took the lessons of retcon and reboot, learned from comics, and put an even newer spin on it. Here’s Klein’s nut graf:

This goes too far to be a mere rip-off. It’s a new kind of retcon. Abrams is doing something that you could previously only do in comics — clearly retell the origin story, but change crucial facts and faces so the series can go in a new direction. His innovation is to tell what is putatively a new story but make it so clearly the old story that no one misses the point, and to bring in the old characters so the film feels like it’s honoring, rather than betraying, its past.

He goes a bit further later on (“For that to work, it needs to be able to do what comics do — keep updating the core story and core characters so it can retell the fundamental myth in ways that work for new audiences”), but this is the core of it.

What’s funny is that when I first read the article, I kinda thought Klein was offbase. I couldn’t think of an example of a comic that had pulled the move that he’s describing here. Sure, you get your Spider-Man: Chapter Ones that add new details to the origin, or excise needlessly outdated specifics, but (A) they still keep the basic core characters the same, and (B) they are often terrible, and summarily ignored down the line.

Then there’s your Miles Moraleses — the legacy characters who coincidentally have very similar origins to their forebears, but with some crucial era-based differences. That’s closer to what Klein posits is happening with TFA, but still distinctly different: no one can, with a straight face, claim that Miles is a reboot of Peter, and the plots that he’s put through are kept almost consciously distinct from Peter’s experiences. 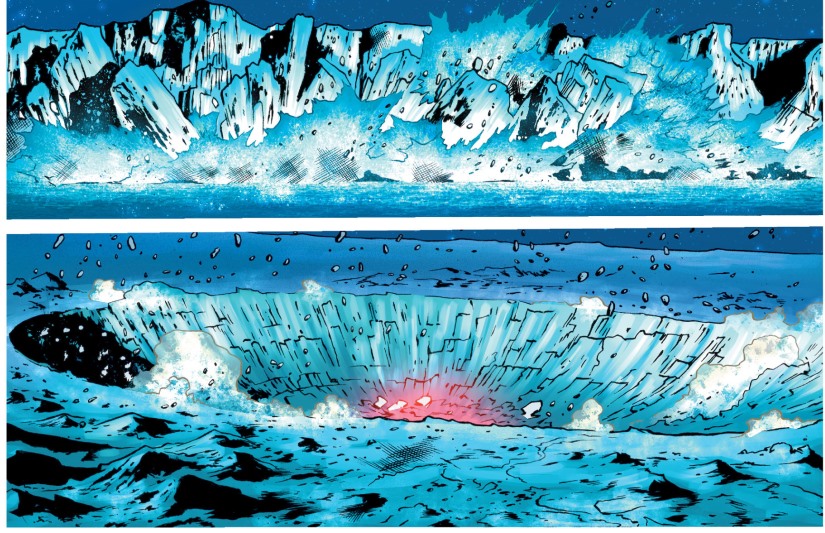 Everyone I’ve seen talk about Hitch’s JLA — including myself and Graeme on this very site — has mentioned that opening storyline owes a notably heavy debt to the opening storyline of Grant Morrison’s JLA nearly twenty years earlier.

Fair enough. There are only so many superhero plots, especially once you consciously elect (as both Morrison and Hitch appear to have done) to go for a drama-lite, action-movie approach to the Justice League, and “Superseded by a better team … who may not be what they seem!” is certainly a classic.

But reading issue #6, I felt like I was reading a mashed-up version of Morrison’s entire run, some thing directly in line with Klein’s description of telling “what is putatively a new story but [made] so clearly the old story that no one misses the point”.

There are so many elements of Morrison’s JLA here, even beyond what we’ve already observed. One of the running gags in that book was that, whenever the team got split up, then-Green Lantern Kyle Rayner would get bounced to the weirdest possible parts of spacetime, separated from his teammates. There’s a scene in this issue where Flash winds up separated from Green Lantern, back in time, and as he talks about how “It’s a thread that led me here and left Lantern somewhere else,” I was literally picturing Rayner in my head, to the extent that when GL reappears a few pages later and it’s current Lantern Hal Jordan, I was genuinely wrongfooted and disoriented.

Later, Aquaman and Wonder Woman have a fight scene together, and it reads much the same as their will-they-won’t-they-between-royalty interactions in Morrison’s book.

Hitch seems to be overtly nodding to other elements of his past as well. There’s some Authority in here — Aquaman gritting his teeth and saying “Get out of my city and take your damned GOD with you,” for example, or the large-scale destruction we get on two separate double-page spreads. (All I can think about when I look at those pages is Paul O’Brien and Al Kennedy on the House to Astonish podcast talking about how much Hitch seems to like to draw rubble. But they say “rubble” in the most gloriously Scottish way — “hrrrrrrrrrrrrrubbble,” basically — and it is wonderful.)

He even draws Rao — a sun god — using the same visual signifiers he gave to the Authority’s Apollo, a Superman analog who was often referred to as a sun god.

The problem — the only problem, really — is that I have no idea what, if anything, Hitch is trying to say by doing this. Maybe he’s just working through his plot using some familiar crutches, but it feels like there’s something more significant just beneath the surface.  (Similarly, it seems significant that there’s very little tying these iterations of the JLA to their New 52 counterparts — it feels like the post-Zero Hour version of the heroes in slightly New 52-ish cosplay.)

With SW:TFA, the reason for the echoing slash rebooting slash retconning slash mashing-up was simple: they had to be as Star Wars as possible to wash the taste of the prequels out of everyone’s mouth, and by god they were determined to err on the side of the Star Wars-y.

Hitch’s reasons are much less clear. Like SW:TFA, it uses its familiar, broken-in feel to its advantage, telling a story that glides smoothly along, knowing that its very familiarity will help to patch over its rough patches. What it lacks, in this comparison, are the new characters — the Reys and Kylo Rens and Finns and Poes that are what TFA was trojan-horsing into my brain via the original trilogy worship. JLA treats its older heroes with the same reverence as TFA, and does just as much justice to them, but where TFA is clearly trying to set up a multi-year, multi-trillion dollar franchise, this is just trying to get a decent, evergreen JLA trade paperback onto the shelves.

There’s nothing wrong with that, and it actually seems likely to succeed in that relatively modest goal. I just wish the comics had learned a few lessons from TFA to go with the ones that Klein believes TFA learned from comics. 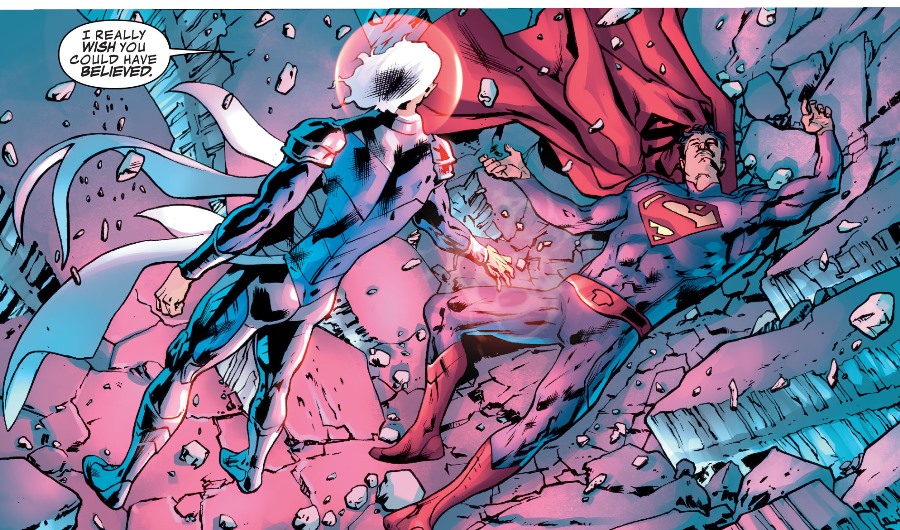 6 comments on ““Mostly Remade”: Matt Uses JLA #6 As An Excuse To Talk About Star Wars: The Force Awakens”