I’ve been working on (and procrastinating around) this Star Wars-y post for a few days. I’m sad to be finishing and posting it just after hearing the depressing news of Carrie Fisher’s death, which also will probably kinda change my reaction to some of the below.

Last year around this time, I wrote about how people considered Star Wars: The Force Awakens a comic-book style remaking of the Star Wars story. I was responding to Ezra Klein writing at Vox about how TFA “goes too far to be a mere rip-off. It’s a new kind of retcon.” My argument at the time (which I stand by) is that TFA is not a retcon of any sort. It’s a remix, maybe, certainly a re-iteration of that particular myth. And, ultimately, it doesn’t really matter because it’s a fun movie that made me smile in all the right moments and that my daughter likes to watch over and over again just like I did with Star Wars.

(NOTE: gawdammit, Episode IV will always and forever be Star Wars to me. I can’t help it. I’m old. I’m sorry.)

But now we have Rogue One: A Star Wars Story, and, man, that thing is not only 100% a retcon, it is a nearly flawless retcon.

A working definition, to back that up: To me, true retroactive continuity is an insertion that, as the name implies, retroactively changes our understanding of the underlying continuity. Alec Holland died and his body was never Swamp Thing. Peter Parker never made it out of that smokestack and we’ve actually been following his clone for all the years since. Mary Jane has known Peter’s secret since they were kids. All the old Miracleman stories were just brain implants. And so on.

They’re stories that not only change what we know now, they deepen it and expand on it and, ideally, IMPROVE it.

Which is where Rogue One succeeds so emphatically. I’ve seen it twice now, a pre-screening to determine if the kids could handle it (we decided they could, with proper advance warning of major plot points), and then a viewing with the kids. I loved it both times, far more than the average reaction I’ve seen online, but didn’t feel compelled to write about it … and then I rewatched Star Wars in light of Rogue One, and that impressed the hell out of me.

Here’s why. (By necessity, what comes after the jump not only spoils every element of Rogue One, it also flat-out presupposes that you’ve seen Rogue One. If you haven’t yet, head down to the theater now. This post will still be here when you get back.)

The most dramatic retcon in Rogue One is, of course, the driving force of the whole plot: the Death Star reactor weakness was not a design flaw, but instead a backdoor weakness built in by Mads Mikkelsen’s Galen Erso as he worked on the project under duress. I’ve seen some argument online as to if this was necessary or not, and I’m a little mixed from that angle — if the “Star Wars story” movies all just address needlessly pedantic points from old Kevin Smith scripts, I’ll definitely be disappointed.

But this particular one, from the perspective of rewatching Star Wars, really works. If it only closed that fussy loophole, it wouldn’t be enough, but Rogue One changes and deepens the entire final act of Star Wars. The very act of ordering the attack is now retroactive validation for both Galen Erso and his daughter Jyn (Felicity Jones) — there is now an implicit “They were right all along” in the briefing of the various attack squads.

And when Luke shuts off his targeting computer in the final moments of the attack run, choosing instead to rely on the voices in his head, the emotional stakes of that decision now scan as much, much higher. When watching previously, the entire hero’s journey narrative structure acted to let us know that, yes, this was Luke doing the right thing to fulfill his narrative potential. Especially with the addition of the prequels to the canon, there is no doubt in the power of the Force, or in Luke’s bloodlines. (Stupid midichlorians….)

In light of Rogue One, though, there’s a part of your (irrational, story-loving) brain that’s screaming “No, you fanatical lunatic, this is no time for showboating–don’t you know how many people died to create that target for you?” It makes Luke’s little “holy crap” gasp as the torpedoes go in resonate much, much more.

Hell, narratively speaking, it even further validates Han’s last-minute save–the forces of human loyalty and non-mystical bravery swooping in one more to time to clear a path for the magical wonder boy to be able to save everyone.

Ultimately, though, it changes nothing that we already knew about the movie. None of our heroes are operating under any motives than we already though; no one we liked is revealed to have secretly been a fascist all along.

That’s a pretty great retcon all by itself.

But Rogue One brings even more depth to Star Wars, from the broadest level to the most nitpicky. Take these, for example:

1) Establishes the Darth Vader we’ve always known. If you were to have come to the Star Wars movies in numerical order beginning at Episode I, you would never ever have the deep, childlike fear of Vader that those of us born in the 1970s and early 1980s did. He would always be a character that you understood, having seen him as a (horrible, horrible) child and a petulant teen. Sure, you’d know that he slaughtered a bunch of sand people and kiddie Jedis offscreen, and that he was complicit in the wholesale murder of the Jedi, but he was also the guy who was duped by the Emperor (for love!) and then cut into pieces and left for dead by Obi Wan. The fact of the matter is that Vader in the original trilogy never actually DOES anything so horrible (as I’ve previous maintained here), we’re just assured that he can and might. In a 90 second coda, Rogue One fixes that right up, letting us know that what happened to Anakin Skywalker has turned him into a terrifying implacable killing machine. So that’s cool.

2) Raises the overall stakes. Kind of an extrapolation of the Death Star idea above, but if you hypothetically see Rogue One before any other Star Wars movie (we showed them to our kids as IV, V, I, II, III, VI, to preserve as many reveals as possible, and I’d now open with R1), you will now believe that any of the heroes could die at any time. It reframes the entire expectation of the story from “magical band of friends beats the big evil bad guy” to “continuation of an ongoing struggle in which no one is safe”. And the recurrence of bad stuff in episodes V and III will now reaffirm that existing idea, rather than seeming like the sudden removal of plot shields from our characters.

3) Opens a spot for Luke. Ever wonder why Luke gets to be Red 5? Me neither, but now we know, and it makes him seem all the more expendable. 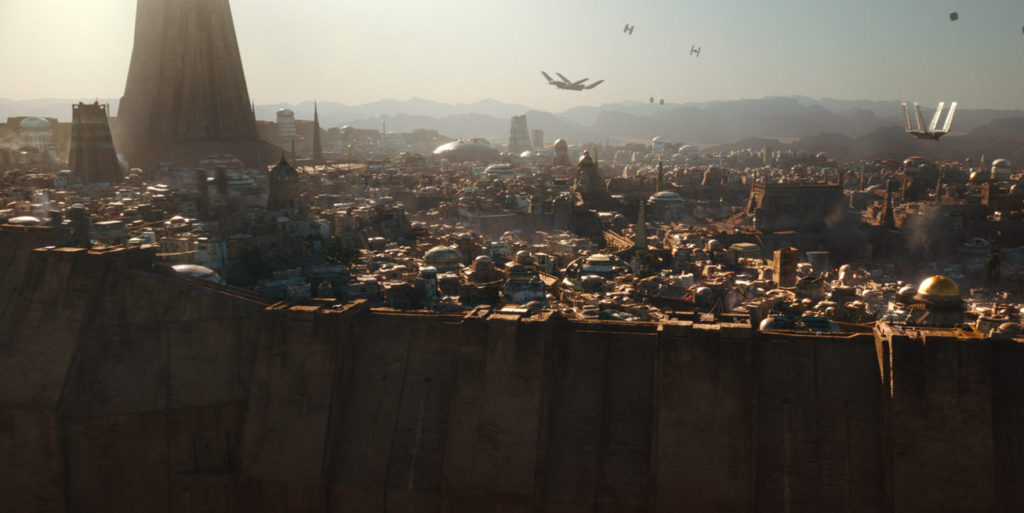 4) Makes the Rebellion into, you know, an actual rebellion. Suddenly, instead of a small but professional military force receiving their mission briefings in a hidden base, the rebellion is very clearly developed as a large band of loosely affiliated but ideologically divergent people who have a hard time deciding on a course of action or level of resistance, including extremists like Saw Guerrara (Forest Whitaker) and placators like those randos in the rebel meeting. Again, this is the kind of retcon that doesn’t undermine anything we’ve seen or thought previously, but instead deepens our understanding of the world the characters move in.

5) Gives us even more reason to despise Tarkin. I’m not going to defend the decision to foreground an all-CGI performance from beyond-the-grave Peter Cushing. But the inclusion of the Tarkin character here is great, because there’s now a part of you, watching Star Wars, who is even more resentful that this weaselly climber is taking credit for Krennic’s management and Galen Erso’s work. At the same time, Rogue One smartly resists undermining the destruction of Alderaan by only having the Death Star use “single-reactor” shots to wipe out cities from orbit; the wholesale destruction of a planet is left to Tarkin, and the impact of the moment in Star Wars is preserved.

6) Explains the lack of Blue Squadron. Again, I never wondered why there wasn’t a Blue Squadron, but now their absence in the callsign check-in is a somewhat poignant moment. Giving weight to a “moment” that is, in fact, not a moment at all is arguably the most impressive trick a retcon can perform. (Similarly, the medal scene at the end of Star Wars will now ring even more hollow through the omission of posthumous awards for the entire cast of Rogue One.)

7) Boosts Admiral Ackbar. Look, this is some extended universe crap that may or may not still be canon, but if you were a nerd of my age and level of interest, you knew that the Mon Calamari fish people were the best tacticians and commanders in the whole Rebellion. And part of you probably wondered why the heck they weren’t involved in the crucial Death Star attack in Star Wars, especially when they suddenly show up in charge of the fleet in Return of the Jedi. Now you know: their commanders at the time were just wiped out as part of the desperate bid to get the plans–but in the course of doing so they showed every bit of the bravery, expertise, and slight recklessness that we’ve always been told they would. Ackbar showing up in Jedi is now a quiet affirmation of the Mon Calamari commitment to the rebel cause, even after taking on near-catastrophic losses. (WHERE THE HELL IS ADMIRAL RADDUSS’S MEDAL, PRINCESS?????)

8) Makes Leia even brassier, somehow. When we first see Leia and her crew defying Vader, we’re led to believe that they’ve been operating under the cover of being a consular ship on mercy missions. (Cue six-year-old me bouncing on my childhood sofa repeating “If this is a CONSULAR ship, then WHERE is the AMBASSADOR?!?” long before I knew what half those words meant.) That was cool enough. But now we know that they are straight up trying to gaslight Darth Vader, and that is even more awesome. “What? No, we’re not the ship that YOU JUST WATCHED shoot its way out of your murder hall. Must be someone else. What are the odds!”

Amusingly, the more deliberate insertions into Rogue One didn’t always land so well for me–I didn’t need to see Artooo and Threepio, I actively hated seeing Ponda Baba and Dr. Evazan, and I don’t understand why the Erso’s appeared to live in the Lars family’s kitchen–but, man, overall this movie does a remarkable job standing on its own while also improving something I’ve loved for forty years. That’s no simple trick.

7 comments on “A Perfect Retcon: Matt Gives an Anatomy Lesson on Rogue One Improving Star Wars”