If you show me a new-to-me book by most comic book writers, I can roughly guess how I’ll feel about it before I ever crack the covers. Peter David on a mainstream super-hero book? I’ll think it’s breezy, largely forgettable entertainment. Garth Ennis on a slapstick buddy comedy? I will walk away slightly disappointed and, oddly, mildly hurt. Christopher Priest on anything? I will love it, and be mildly annoyed that there isn’t more of it. Joe Casey on a creator-owned superhero-adjacent book? I will be left completely cold and kind of hate myself for the whole thing. And so on and so on and so on.

I mean, this is not news. This is why we all have favorite writers/artists/sculptors/pianists/etc.

But it’s worth mentioning because Rick Remender TOTALLY baffles me every time. He’s written stuff that I love, and he’s written stuff that I couldn’t finish, and I haven’t yet figured out what’s going to go which way.  So I got to have the exciting experience of coming to the new collection of The Last Days of American Crime with no idea whatsoever how I’d react. 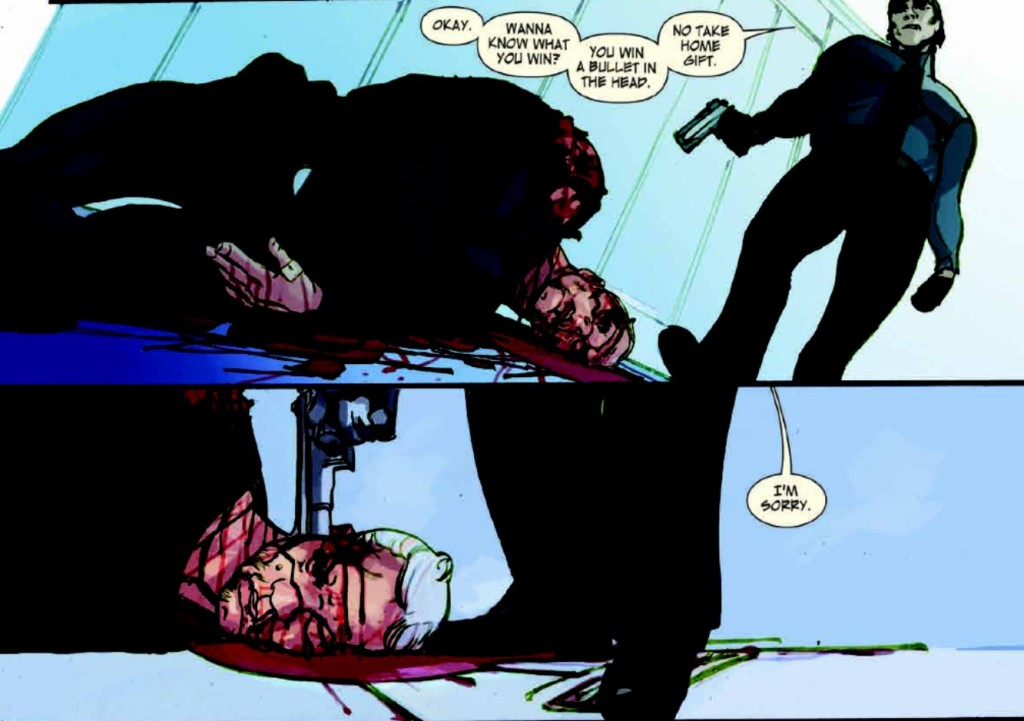 My initial impression of Remender’s work, as I recall, was pretty negative — people hyping up Black Heart Billy on the Warren Ellis Forum, I believe, and generally making it sound like the worst kind of punk-rock smug. I don’t think I even tried the book, but whatever discussion I read set my opinion of Remender for years — so much so that when read his lunatic Franken-Castle take on the Punisher years later, I couldn’t believe it was the same guy.

That book was, more than anything else, fun. It had the energy and enthusiasm for the Marvel Universe that I always enjoy, but that I associate with a wide-eyed pop enthusiasm that’s pretty much the polar opposite of the punkish sneer I had assigned to Remender in my head.

It’s been pretty much the same on the creator-owned side: I like Deadly Class (but always forget to read it), almost enjoyed Black Science but was put off by the … god, I can’t even remember … was it nihilist? anarchist? … whatever -ist it was that put me totally in mind of my original, uninformed opinion of the guy. And Low, with LDoAC artist Greg Tocchini, seemed okay but I really had trouble clicking with the art and couldn’t stick with the book.

In hindsight, that probably could’ve been a clue to my reaction, and, yes, Tocchini’s art doesn’t quite click for me. He has a lushness and dynamism to his action that works well, and his body language for Sexy Femme Fatale is brilliantly executed. But there’s something about his faces that leaves me totally cold — and, worse, often struggling to recognize characters from panel to panel. (It reminds me, weirdly, of Larry Stroman’s work; I say “weirdly” because they’re two distinctive artists whose styles really don’t look anything alike, aside from this odd, simian look to some of the faces.) (Also, full disclosure, the book is out in a fancy hardcover but I did my reading from a review PDF, so it’s possible the reproduction is superior in the printed version.)

But anyway Tocchini is far from my main frustration with the book. Because it feels a bit like the two sides of Remender that I kept ping-ponging between take turns writing this book, like an exquisite corpse done by one guy.

On the one hand, you’ve got a pulpy crime/noir piece that archetypal (if you’re feeling charitable) or bog-standard (if you’re feeling cranky). Old guy with a checkered past planning one more job for retirement? Check. Attractive young femme maybe-fatale of questionable motives? Check. Slightly icky relationship between old guy and young woman? Megacheck. A third partner in the potential crime who’s maybe kind of psychotic and brutally jealous of the girl? Yuuuuuuuuup. Double-crosses and triple-crosses and Things Going Wrong? YOU KNOW IT.

But on the other hand, that crime plot is nailed onto a really clever, incisively satirical background: the Government, over general public opposition, is going to start broadcasting a signal that makes it impossible to commit a crime. What our (anti-)heroes are planning might literally be the eponymous last day of American crime. And that’s a really clever conceit that plays well to Remender’s strengths.

So much so that it’s a real disappointment that the book spends 80% of its time letting the criminals spout sub-Frank-Miller dialogue and do Ellroy-esque crime stuff, and only 20% on the genuinely interesting high concept.

I realize that, as I often do, I’m straying dangerously close to “this isn’t what I wanted it to be and therefore I don’t like it,” but I think it’s more than that here: at a minimum, the balance between background and main plot is off and the story fails to make effective use of a pretty sharp high concept. At worst, one story shows some real cleverness and insight and craft, and it’s weirdly subsumed to a less-interesting generic potboiler.

So this pretty much didn’t work for me at all … but, oddly enough, it hasn’t particularly changed my overall opinion of Remender, and I’ll continue to sample anything he puts out.

That was going to be it, but someone last week asked if I was keeping up with Bryan Hitch’s JLA book, so I thought I’d also offer some very quick thoughts on issue #3.

Basically, issue #3 is fine. It’s trying (and generally succeeding) at striking the JLA-as-widescreen-action-movie tone that Grant Morrison wrote so effectively back in the mid-1990s, but is somewhat hampered by the fact that a fairly major part of the plot appears to be a beat-for-beat replication of part of Morrison’s first storyline. It’s got those great Bryan Hitch splash pages and widescreen panels, and also those weirdly stiff Bryan Hitch action sequences (which are particularly rough on the Flash, a character who depends almost entirely on the illusion of fluid motion).

It’s basically a meticulously rendered episode of Super Friends: continuity-free (or at least very, very continuity-lite, so far) stories of the big-name heroes battling big villains. It will probably read terrifically in trade, or bought for 99¢ an issue from an inevitable digital-comics sale in a year or so, but for now you can safely let it go on without you while you save your money to spend feverishly trying random Rick Remender comics. 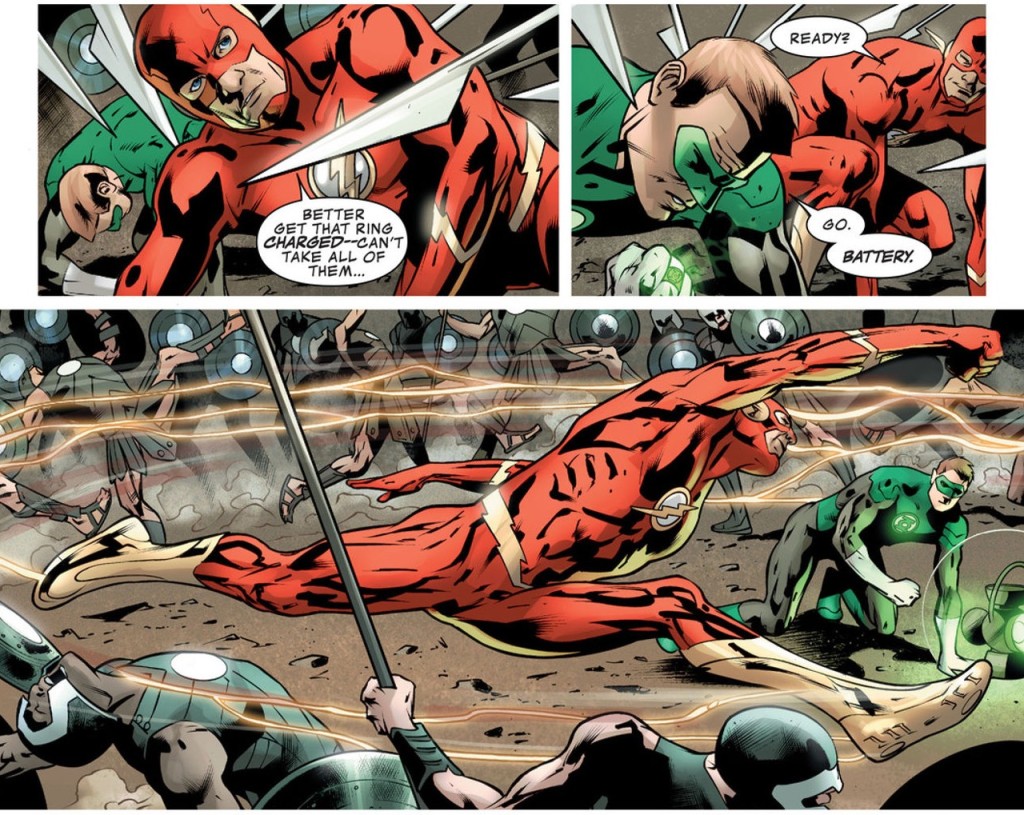