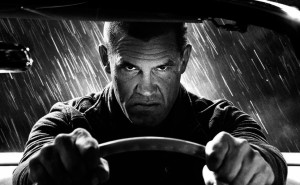 On Monday, I tweeted that I wanted to go see Sin City: A Dame To Kill For, the latest film by Frank Miller and Robert Rodriguez.  In the interest of full disclosure, I should admit I called it “Sin City 2.”  Because it was a tweet and because I feel the joke is played out, I did not append “Noir City Boogaloo” to the end. But now I regret that, kinda.

Friends said things like “jeff no you have so much to live for” and “why do that when you can get drunk and fall down a couple flights of stairs instead?”  and Graeme himself told me not to, adding “Friends don’t let friends watch Sin City 2.”

This was all the encouragement I needed, and so, on Wednesday, I found myself in the first matinee (at 1:oo p.m., always a good sign) with five other people (ditto) to watch the follow-up to the popular 2005 film which faithfully adapted four stories from the intermittent series Mr. Miller wrote and drew through much of the ’90s.

Full disclosure time again: I almost used another old joke and wrote “Sin City: A Dame to Kill For starring Whiplash, Robin, Thanos, and Sue Storm” but I think, again, that joke is kind of played out and, again, I kind of regret not doing so.  Many of the Hollywood analysts noted that doing a sequel nine years later might not have been the best idea, financially speaking, for various reasons, but I don’t think any of them really added “you know, because we’ve seen enough of this shit.”  But I think there’s something to that: in the intervening nine years Marvel has launched every movie in its film empire, Christopher Nolan released every movie in his Batman trilogy plus Inception, and Zach Snyder released 300, Watchmen, and Man of Steel (and Sucker Punch!). It hasn’t even been all superhero stuff–we’ve seen some good comic book movies (Persepolis!, Snowpiercer!) , and a lot of bad comic book movies (here is where my The Spirit joke goes).  Whatever was original or surprising about the Sin City film has been cannily appropriated by now.  As we are all aware, there is nothing  groundbreaking or risky or subversive anymore about a comic book movie–just ask Whiplash, Robin, Thanos, and Sue Storm.

And yet, I went into Sin City: A Dame to Kill For with something like the lowered expectations nostalgia brings: while Sin City 2 being only as good as the first movie hurt it in today’s very different landscape, “only as good” would be good enough for me.  I liked the first Sin City.  I’m a sucker for seeing black and white movies on the big screen, especially if there’s some element of excitement and adventure that isn’t defined as, you know, watching Woody Allen sit at a restaurant and wave his hands about. I liked how perfect Mickey Rourke was as Marv, and how even though Clive Owen is a better actor than Bruce Willis, he couldn’t find his way into the film but Willis could. I liked how surprising some of the actors–Elijah Wood, Nick Stahl, Josh Hartnett(!?)–were.  Sometimes quite good, sometimes not, but at least…surprising.

But here’s the problem–Sin City: A Dame To Kill For isn’t as good as Sin City.  It’s not nearly as good.  More or less across the board, it is genuinely terrible.   In under two hours, Rodriller (that’s my attempt to do for “Rodriguez/Miller” what Brangelina did for Brad & Angelina) spins out four stories, two from the original comics (“Another Saturday Night” and “A Dame to Kill For”) and two Miller unfortunately wrote especially for the screen.  All are, arguably, prequels and/or sequels from the first Sin City film, focusing on Dwight, Marv, and Nartigan (that’s Brangelina-ese for Nancy/Hartigan, the heroes of “That Yellow Bastard”).  But because Powers Boothe is the villain of two of the pieces, it almost feels more like he’s the real protagonist of the film: he and Eva Green’s bare breasts are on camera at least as long as Mickey Rourke.  I kind of hope that, at least in some international backwater, the movie is playing as  Adventures of Rack and Mustache (in 3-D).

(Seriously, you see Eva Green’s boobs so much in this movie, and from every possible angle, that I think someone equipped with the DVD of this film and a 3-D printer should be able to build a perfect facsimile of her chest. Which, you know, ew.  But it is theoretically possible.)

Sadly, a lot of the movie didn’t remind me of Miller’s comic: they reminded me of Max Fischer’s plays from Rushmore, actors trapped in hilariously derivative scenes while the author/director looks on, lost in visions of his own greatness.  The sets and effects are terrible, far cheaper than they seemed in the original, and Rodriller muster up no energy for most of their interminable action scenes.  At one point, Jamie Chung (taking over from Devon Aoki as Miho) trots half-heartedly on a green-screen treadmill while chased by the animated silhouettes of thugs firing guns, all of it looking exactly like the kind of late-night commercial a cash-rich car salesman with a cocaine problem might commission from a local shoe-string production company. Throw in the terrible soundtrack, unceasingly festooned with Rodriguez’s soul-crushingly vapid guitar licks,  and you get a cinematic experience that didn’t remind me of the movie Sin City (2005) as much as the video game Max Payne (2001).  In fact, it reminded me of the video game Max Payne (2001) a lot. By the end of the movie, I even doubted Robert Rodriguez or Frank Miller had ever been inside a strip club, which is amazing because if there are two guys you know have spent a lot of time in a strip club…

And yet…I’m almost glad I went?

There’s another reason why I liked the first Sin City movie and Sin City: A Dame to Kill For doubles down on it: you put an actor in front of a camera, and you take away their co-stars, their sets, their props, and, in this movie, any good dialogue, as well as anything that resembles reality as anyone has ever known or experienced it.  Pop quiz, hotshot:  What do you do? What. Do. You. Do?  (Protip:  Don’t quote Speed. That is as hack as “referring to movie stars by their geek movie names,” and the “_________ Boogaloo” joke.)

Like I said, Clive Owen–who I would happily spend hours arguing is, in Croupier, far more Sin City than his role–or  any other role–in Sin City–just couldn’t nail it in the first movie.  I think a lot of it, god help him, was his accent, because the one advantage the leads in Sin City films get in the face of all that deprivation is a voiceover.

But a lot of the actors in these films don’t even get that. It’s down to things like posture, voice, commitment, who they’re cast as and what they do with it.  It’s interesting, probably the closest a filmgoing adult can get to pulling the legs off of ants and burning them with magnifying glasses.  You sit there, thinking in an abstracted way: What are these things, anyway?  What do they do?

Considering Joseph Gordon Levitt as Johnny and Josh Brolin as Dwight were in two of the better quasi-noirs of the last decade–Brick and No Country for Old Men–it maybe shouldn’t be surprising they are intensely watchable, and at times even believable, in their thrice-derived roles.  But it is surprising.  A day later, part of what sticks with me is that look on Dwight’s face when Manute punches in him in the chest for the first time.  (OH YEAH I FORGOT TO MENTION IT BUT JESUS SIN CITY IS RACIST AS HELL.) Or Levitt’s voice as he explains how he’s won even as he’s lost everything.  Both of those guys say things–unbelievable, ridiculous things–and you believe them.  Not all of the time? But that is far better than what the actual score should’ve been, which is: none of the time.

Rosario Dawson as Gail is great. I vaguely remember her in the first movie, but she commands the screen here. And Christopher Meloni does amazing stuff with the role of Mort, the police detective in “A Dame To Kill For” who falls under Ava’s spell: just by the way he handles his glasses, Meloni lets us know his character is dangerously repressed and crazy as a shithouse rat.  It made me remember how much I’d hoped, reading the original series, Mort was going to end up being Dwight’s nemesis at the finale.  Rourke is disappointing as Marv, in part because his makeup here is worse, and they film it from the worst possible angle. (Also, in the same way Levitt and Brolin were in better noirs, Rourke in The Wrestler managed to out-Marv his own Marv.)  I kinda like how the guy at the bar with the crazy hair who was supposed to maybe be Wolverine in the comic looks like he’s maybe supposed to be Jim Jarmusch in the movie?  I thought that was pretty funny.

As for Sue Storm, Miller and Rodriguez do everything in their power to give Jessica Alba a meaty role (except, you know, treat her like an actual human being.  But then nobody else in the movie gets that either) and she’s okay, I guess?  You know she goes crazy because she cuts her hair like Sharon Osborne, and then her stunt double gets to roll around with a crossbow and shoot guys until Alba can finally confront Powers Boothe for causing the death of Bruce Willis.  (And then, of course, it’s really Bruce Willis–who is dead–who makes the difference.  Because although women can be tough, they still can’t be as competent as men, even dead men.)

This summer, I started to suspect movies might really be changing, things like narrative and drama and characterization being these weird evolutionary vestiges from theater and literature that might actually be cast aside. What’s going to remain is spectacle and pageantry, and what’s going to keep us in the seats watching all that spectacle, all that pageantry, will be recognizable expressions of humanity, even as those expressions grow more and more abstract:  a crying raccoon, a tired, angry ape, Mark Wahlberg’s trembling bicep. As capitalism gives us more of everything but time, we will grow ever more eager for the unique experience, that moment that shouldn’t work but does, the second of genuine triumph buried in all the endless hours of flat, bright trudgery.

But then again, I’m probably wrong.  After all, Sin City: A Dame to Kill For was a bomb everywhere but in Russia (where reality goes to die), so maybe genuine drama and narrative still has a place in the world.

Or maybe friends don’t let friends see Sin City 2.  Maybe the reason movies fail–especially bad movies–doesn’t have to be any more complicated than that.

3 comments on “And The Parade Goes By: Jeff Watches Sin City: A Dame To Kill For”