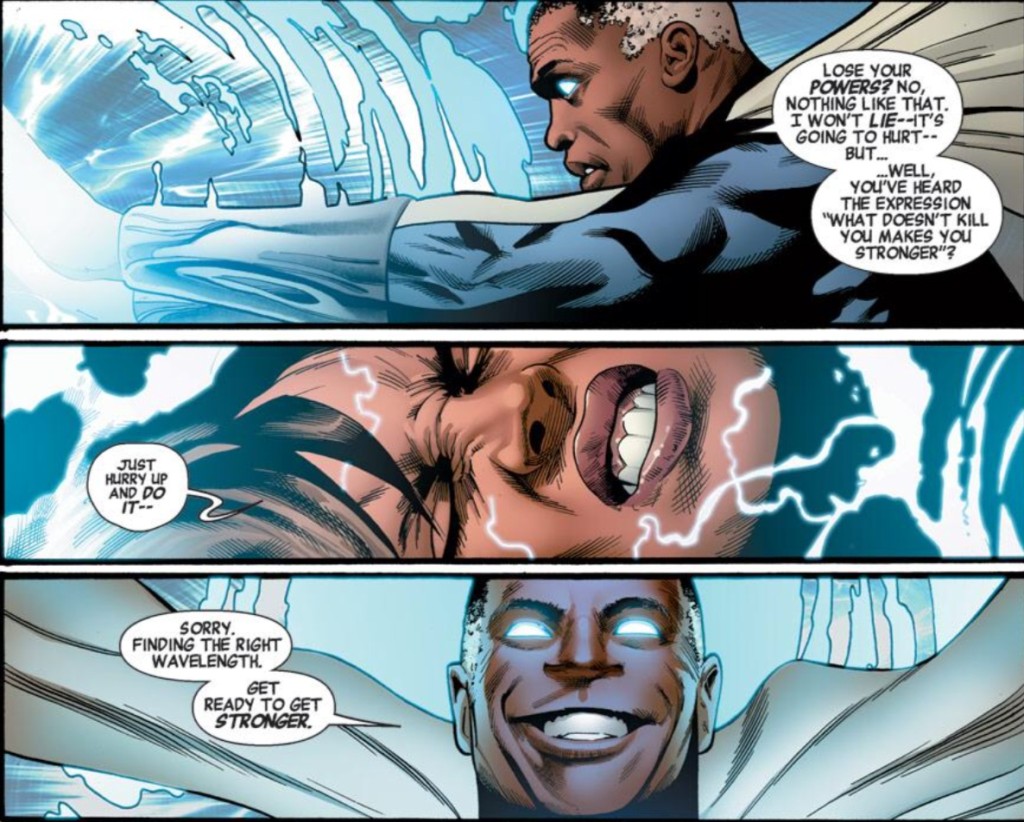 I’m gearing up to talk to Graeme in just a few hours for Wait, What?, Ep. 157.  For me, there’s a certain amount of forethought leading up to an episode–although I’m sure it doesn’t sound like it–even if that forethought doesn’t end up being much more than “hmm, what the hell do I have to say about comics this week?”  On a good week, it’s really easy:  there’s the first issue of Multiversity and a Little Nemo comic and a comic book creator sending dick pics around, although it helps if I feel like I have something to say that maybe hasn’t been said already (which may make talking about Multiversity kinda difficult).

On a bad week, nothing really stellar comes over the beam on Wednesday and the comics industry holds its torpid little secrets and everything that goes through my head just seems nasty and spiteful and, worse, old.  I don’t know how many of you also grew up with a parent that drank too much and shared confidences better shared with non-offspring, but the only thing worse than the complaint you really shouldn’t be hearing is having to hear it for the fifth or sixth time.  There are times where I worry about bitching about my dysfunctional marriage to comics because if you’re reading this, you also have a relationship with comics: maybe it’s a marriage, or it’s just a relatively new fling, or it feels like something you don’t need to put a ring on because you know you’re in it for the long haul.  There are times when I curse the words in my mouth for being both bitter and stale.

Fortunately, this week I (re-)read Mighty Avengers on the Marvel Unlimited app,  written by Al Ewing, and illustrated by Greg Land for the first five issues, with Valerio Schitti popping up for the sixth. Previously, thanks to the generosity of Whatnauts, I had made my way to issue #4 of Mighty Avengers and I remember thinking at the time the issues were good, not great.  They somehow seemed both too big and too small, simultaneously:  in particular, the first storyline, which ties into Marvel’s Infinity event, brings the team together and has them fight both Proxima Midnight and the return of Shuma-Gorath.  When first reading it, the small misfires kept tripping me up:  I couldn’t fully tell when Ewing was being deliberately or accidentally obfuscatory about his superheroes and their powers, and by the end the team is formed, and yet it doesn’t get much more proactive than that.  As frequently happens with big event crossovers, the items on the to-do list are checked off and then put aside, since someone else is going to be picking up the next page of the story.

What was great about re-reading it this week was how little of that actually mattered–and, in fact, Ewing does indeed have Monica Rambeau say, “Once we’ve taken a moment to catch our breath, we’ll need to help with this Thanos invasion that’s–” right before Luke Cage breaks out a nice “we are all Avengers. You are Avengers” speech.  And since the chances of Graeme and I talking about Multiversity #1 in the upcoming podcast is really close to 100%, it was nice to see Ewing’s speech working on the same thematic wavelength as that book’s.  In addressing the reader, Cage is telling them exactly what we want to hear from big comic book companies more often:  people of color, whether readers or heroes, are Avengers.  There’s not even the privileged speak of allowance, it’s not a “can be Avengers” situation, it just is.  After watching America act like a racist werewolf for the last week–seemingly fine by day, a police state by night–it’s a message I’m really glad is out there, even if it’s in a book that (as of issue #6) was selling half of the regular Avengers title, and (as of 7 hours ago) was still being complained about by racist knuckleheads. While I guess maybe it could be argued that Marvel could’ve done more to promote the book, but I appreciate they put Greg Land on it so that it looks like a book that matters to Marvel.  Like Mike Deodato, Land’s people can seem plastic, unreal, but I feel that, like Deodato, Land is working harder at pushing for more dynamism in his page layouts. And Schitti’s work is similar but in many ways the opposite: people’s faces are more expressive and nuanced, but while the panel-to-panel flow is professional, there’s not much in the storytelling to make you sit up. 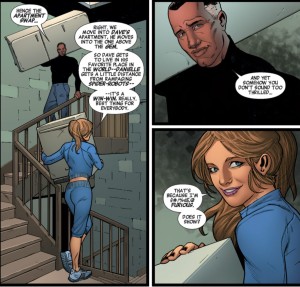 The Stuff I Love: Characterization, Life Being Lived.

I know I’m always a super-huge booster for whatever digital service I happen to be using at the time (Comixology, 2000 A.D.’s app in the iPad’s newsstand, and now Marvel Unlimited) but I do wonder if Marvel Unlimited’s all-you-can eat model helps trick me into being just a comic book reader, not a reader/guy who has to watch his budget/guy who should have a good take for a podcast or a weekly post. When the only investment is time (although let’s not get into the whole “time as the ultimate commodity” thing that more than ever is powering American late-stage capitalism), maybe my internal watchdogs relax more, and I worry less about how small issues #4 through #6 can feel.  As many good jokes as there are packed into issues #4 and #5 (that riff on the Avengers film’s “We have a Hulk” speech was really god-damned clever), a struggle for who’s leading the team feels like too small, too insular a story for what is technically the book’s second story, and issue #6 is an issue super-enjoyably packed with characterization but mighty skimpy on incident.  At another time, I’d be more inclined to cluck my tongue and talk about how team books now that don’t spend their first year trying to grab your attention with epic sweep are going to end up cancelled in the first year.

And maybe I’d be right to make those arguments…or maybe that’s exactly the sort of unnecessary Monday-morning quarterbacking that makes professionals tear their hair? No matter what the state of the industry’s scalp, that is what’s going on in my head, and there are times when I’m just as happy as they are when it finally shuts up.  And yet, for better or worse, that’s the state of nearly all entertainment industries now: there was more drama about the projected opening of Guardian of the Galaxy than there was in the movie itself.  The hustle for a consumer’s attention span is constant and exhausting but seemingly essential:  there’s always a younger, more nubile art form outside the window.

But while re-reading Mighty Avengers #1-6, I did find myself wishing for more time to re-read comics, wondering if some titles didn’t grow better with a re-read, with the patience to forgive the irritating and embrace the admirable.  Certainly, I found that to be the case with Mighty Avengers #1-6.  I hope that even if the title can’t hold on in a vexingly tough marketplace, these issues will continue to be discovered (and re-discovered) by readers.  They deserve it. 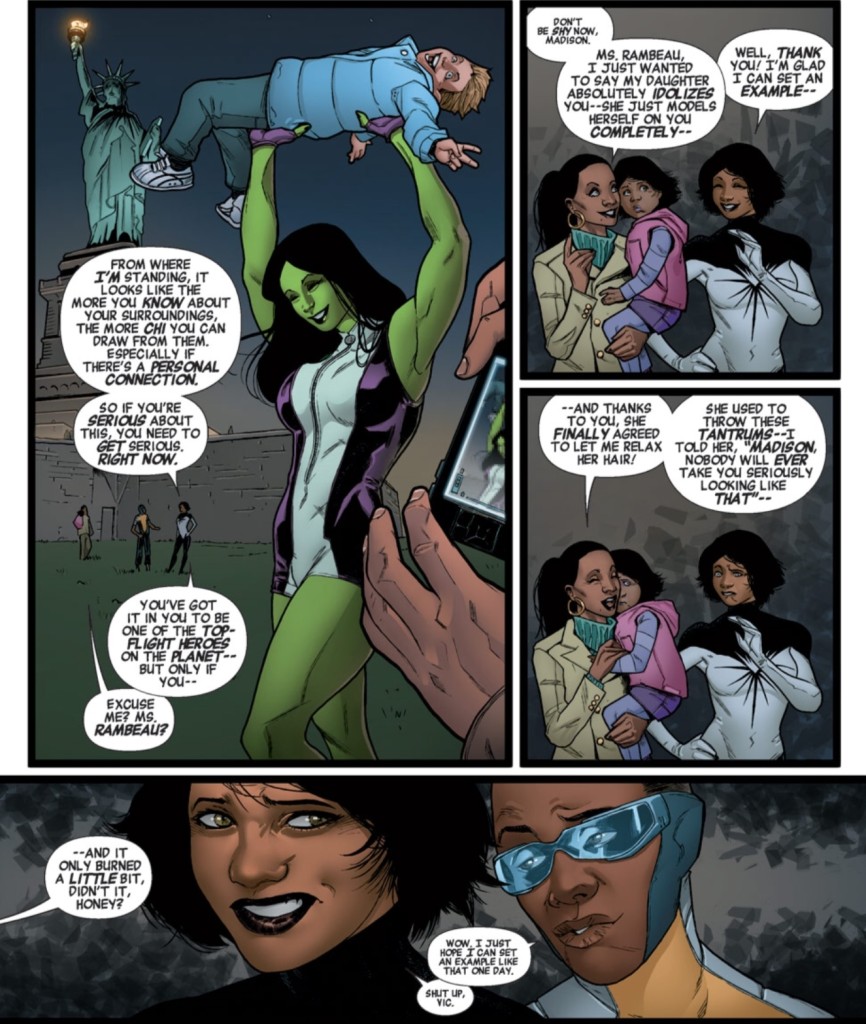