I saw Logan a week ago, my wife and I sneaking out to late show on Sunday night despite both needing to work the next day. My hopes were not high, despite the generally positive reviews and my residual fondness for Hugh Jackman (in general and as Wolverine in particular), mainly because I found the previous James Mangold-directed entry (The Wolverine) to be a disjointed mess.

(I also tried to watch X-Men: Apocalypse for free on-demand the night before, and found the first 20 minutes so dreadful that I (a) Turned it off to do literally anything else with my life, and (b) Felt like it might’ve been bad enough to make hate the entire concept of live-action films about the X-Men.)

(And, no, I haven’t watched Legion yet. It’s backlogged on my DVR. I’m sure it will restore my faith in superpowered live filmed entertainment, etc. Not yet, though.)

I wound up enjoying it a lot, to the point where I’m still thinking about seven days later. This post is my attempt to figure out why that is. So it’s listicle time again!

(Assume pretty FULL SPOILERS FOR LOGAN BELOW. At a minimum, it’s written kinda presupposing that you’ve seen the movie, or are at least largely aware of the details of it.)

1) The stuff that obviously should’ve worked, worked. It’s funny to realize how unknown Hugh Jackman was when he took this role back in 2000, because he has taken over as the Wolverine in my headcanon (from a Grant Morrison-scripted, Frank Quitely-drawn Wolverine, who in turn took over from a Chris Claremont-scripted, Paul Smith-drawn version).

(Although look at this Barry Windsor-Smith panel from Uncanny X-Men #205, from THIRTY-ONE YEARS AGO, that looks eerily like it was drawn using Jackman’s version as reference. Maybe this has always been my headcanon. I dunno.)

Jackman obviously loves to play the character, and here he gets to do so to great effect, making the most of his more-than-passing similarity to Clint Eastwood in the process. And, whatever muddied the last Mangold-led film, it’s clear that he and Jackman and everyone else involved share a firm vision for this one, and the resulting picture feels much more keenly focused as a result (doubly impressive given the shambling, episodic plot and the constantly shifting tones).

2) The stuff that could’ve misfired badly didn’t. I kept thinking of Jake Lloyd as I watched this. I don’t like to hate on anyone just trying to do their jobs, least of all some nine-year-old working under a director with literally no touch whatsoever for handling human beings, but the last time I rewatched Phantom Menace (with my kids, I swear!), it felt like–despite a lot missteps–only two of the problems were insurmountable: one was an annoying, goofy, unrealistic looking creature who mugged his way through every scene and couldn’t deliver a line convincingly to save his life, and the other was Jar Jar Binks.

So as I’m watching newcomer Dafne Keen (who, admittedly, is 12–a world away from 9) absolutely destroy in a pretty demanding role as Laura, and a bunch of other ragamuffins doing solid work with what they were given as her cohort, all I could think was “If there are this many decent-to-great kid actors out there, what the hell was Lucas doing?”

The Old Man Logan stuff also could have gone so horribly awry. (Who among us has ever thought, “Boy, I sure hope they capture the spirit of this Mark Millar adaptation!”) But they succeeded in pulling out the good aspects (broken, world-weary Logan in a grim near-future) and ditching the much-stupider (incest, the Marvel Universe, that specific grim near-future, and pretty much everything else from the comic). I have no idea if Millar touched the script or not, but there were even specific lines that captured the vibe of a Millar comic (anything about Xavier’s brain, basically) without any of the baggage.

3) It was an ending. As much as everyone talks about the impact of Frank Miller’s Dark Knight Returns, I think what’s stayed with me more is Alan Moore’s introduction to the 1989 TPB printing of that comic. That’s the one where Moore argues, quite persuasively, that for these stories that are all eternal middle, a potential ending is the most important thing.

Here’s Moore, courtesy of this site:

All of our best and oldest legends recognize that time passes and that people grow old and die. The legend of Robin Hood would not be complete without the final blind arrow shot to determine the site of his grave. The Norse Legends would lose much of their power were it not for the knowledge of an eventual Ragnarok, as would the story of Davy Crockett without the existence of an Alamo. In comic books, however, given the commercial fact that a given character will still have to sell to a given audience in ten years’ time, these elements are missing. The characters remain in the perpetual limbo of their mid-to-late twenties, and the presence of death in their world is at best a temporary and reversible phenomenon.

This gives Wolverine that ending, and it does better than any comics version ever has, because….

4) It is divorced from all continuity. This is something that ties into #2 and #3 above, and goes well beyond it. The guys on the great Cinematic Universe podcast surprised me in their episode covering this movie by getting kinda wrapped around the axle of where it fits in to the greater X-Men movie continuity, which…I mean, who cares?

Maybe this is the first sign of finally aging out of my stunted, superhero-obsessed overlong youth, but I absolutely loved the way this film used continuity: it presupposed an entire history of the characters, and made allusions to things that could’ve been specific to the movies (“the Statue of Liberty was a long time ago,” Logan says) but also could’ve just been past adventures.

The movie even gives a kind of in-universe meta-explanation, by including X-Men comics that Logan dismisses as barely-accurate garbage–you could certainly assume that the movies fall into that same category. But it doesn’t matter. All that matters is that you know, roughly, what the story of Logan is (wildman, taken in by Xavier and the X-Men) and that there is a long history of adventures with Xavier, et al., which has now come to an undignified near-conclusion.

That’s it. It doesn’t matter if we’re in the Days of Future Past timeline or the original timeline or…well, anything, really. This is the same as how people keep saying “We never need to see Uncle Ben or the Waynes die again.” We know all of that stuff already–just like millions of people who have never, ever read a comic have all that stuff deeply imprinted thanks to SEVENTEEN YEARS OF WOLVERINE MOVIES.

Now just tell us a story.

And they do, and, again because this is divorced from continuity, it gets to have an ending. Which, see #3 above. This entire movie would be undermined if there was even a hint of a post-credit sequence.

5) It left me wanting a sequel. This may seem in conflict with #4, but hear me out. It’s hard to remember now, but there was a time when a sequel was something the studios made IN RESPONSE to actual customer demand, rather than as part of an implacable, unstoppable three-phase ten-year marketing roll-out.

And, while this movie makes a very satisfying end to Logan’s story, it leaves a lot of threads out there that I would love to follow.

I don’t HAVE to follow them. I wouldn’t contribute to a letter-writing campaign to get the sequel made. But the story was good enough, and the actors compelling enough, that I left the theater thinking I’d be happy to spend another two hours in the theater with them. (Although I’d be happy if we could keep it to two hours; this thing clocked in at closer to 2:20 and I was definitely starting to feel it by the end.)

6) It had resonance. It’s a tired truism at this point that the X-Men comics resonate with tweens and teens because, done right, it hits on all the things that feel like they’ll destroy your life at that age: not fitting in and your body turning into something unfamiliar and everything feeling like drama all the time. Logan brings that same metaphor to its aging audience: Logan’s body is betraying him, he’s caring for an elderly father-figure in failing health, he’s got no relationship with his kid, and he’s wondering if everything he’s done in his life amounts to anything at all. It’s not the most novel territory to mine, but but the movie does it very well.

(This metaphor also contains the tacit admission that so many of us who thought Wolverine was just about the greatest in the 1980s or 1990s are now old men, living on the border and driving limos for extra cash.)

7) It made me love X-23. I’m enjoying Tom Taylor’s treatment of Laura in All-New Wolverine, but I missed the character’s rise from the cartoons through the comics until today. The whole concept just felt so uninteresting to me–young goth Wolverine, but a GIRL and with FOOT claws!–that I ignored it altogether. But movie Laura…she’s terrific.

Part of it is personal–my own daughter is dark-haired, precocious, and moody, occasionally flashing a quick, atomic temper, so I’m a mark for the feral-kid archetype in films. But part of it is Keen’s performance. She sells every aspect of this weird, complicated character, pulls off long silent stretches and long unsubtitled Spanish stretches, conveys the character’s rage and physicality when necessary (right before, inevitably, turning into a CGI puppet or a stunt double for a few seconds), and even manages to sell the over-the-top poignancy of the last scenes of the movie.

I still don’t particularly want to go back and read old X-23 comics, but now it’s for a totally different reason (i.e., because I’m afraid they won’t live up to the onscreen performance, rather than because I don’t even remotely care). 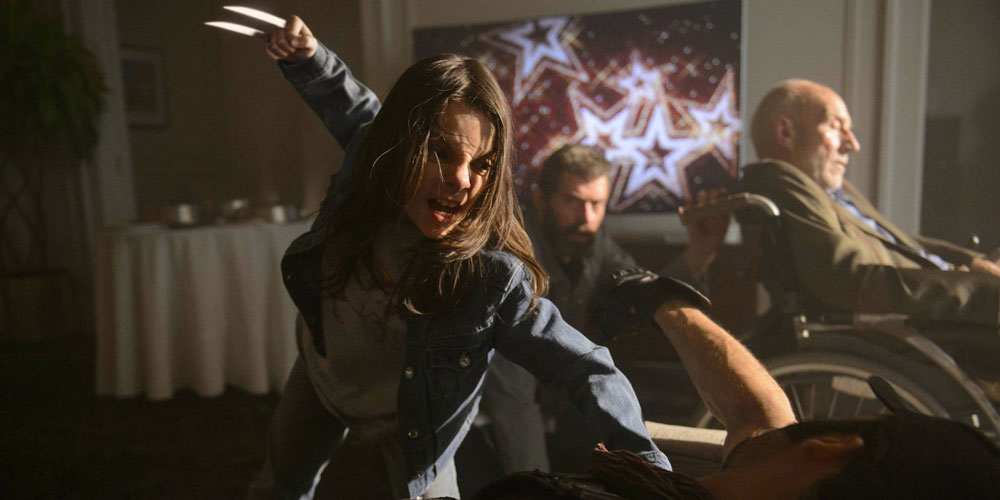 8) It is brutal. This is harrowing movie, both in the horror-movie-tension sense and in the emotionally-draining sense. It is willing to follow through on the causes of a life of violence–again, in a heightened super-hero way–and is unsentimental in its willingness to casually dispatch characters.

Unlike in Deadpool, where the violence was extreme but played for Looney Tunes laughs, Logan goes for visceral physicality. It’s been a long, long time since I found myself muttering “Holy CRAP” in the movie theater over the violence in a fight scene; it happened at three separate moments in Logan, and always meaning “oh my lord that is brutal,” not “YEAH, BRO, CUT HIM TO PIECES!”

As always, I’m not saying it’s a perfect movie. It’s not too long per se, but if it were a lean 100 minutes, it’d be an all-time great. It has no problem being incredibly on-the-nose with Logan facing his worst self. It wastes a fun performance from Boyd Crowder, sapping all the menace from a promising villain halfway through the movie. It’s similarly unsure quite what to do with Stephen Merchant’s Caliban once he finishes infodumping a few things for us.

But it is very, very, very good–far and away the best X-Men-related film, to my eyes–and it’s good on its own merits as a move, not just because it features a character I imprinted on 30 years ago.