As if the teases of the end of Secret Wars and the start of Civil War II and oh, yeah, we have that Avengers: Standoff thing as well haven’t been enough to exhaust you when it comes to Marvel’s big event books, the House of Ideas released another random teaser this afternoon, with absolutely no information attached: 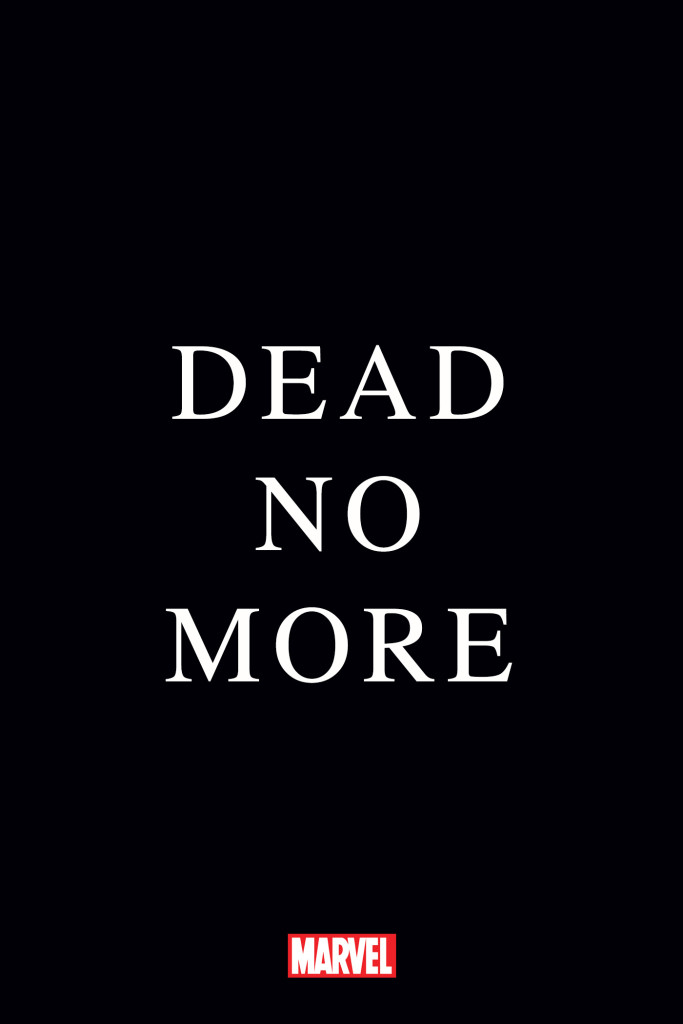 “Dead No More”? Is that some kind of Faith No More cover band with everyone dressed up in Deadpool masks or something? Because, when it comes to the current Marvel output, the idea of dead means dead is, at best, a malleable concept.

It used to be, when superheroes died (or supervillains, come to that), fans would know to just wait for the inevitable resurrection; it became such a trope that characters inside the stories would refer to it — there was a line in an X-Men comic about heaven having a revolving door, I seem to remember, and Final Crisis had Superman specifically call out for J’Onn J’Onzz to be resurrected at his funeral… which he was, of course, at the end of Blackest Night, an event literally built around the fact that comic book characters couldn’t stay dead. But in these heady days of All-New, All-Different Marvel, something else is afoot: dopplegangers.

Think of the characters who are, in theory, “dead” in the current Marvel Universe, after all: There’s Wolverine — who has an alternate universe version wandering around as “Old Man Logan.” There’s Cyclops — who has his younger self running with the All-New X-Men. (Same goes for Jean Grey, of course.) There is, potentially, Reed Richards — pending tomorrow’s final issue of Secret Wars, of course — but his Ultimate Universe bad guy self has shown up in New Avengers already, just in case. Hell, even Gwen Stacy is up and around in both Spider-Gwen and Gwenpool.

Who are we left with whose death counts? The Watcher! He’s still dead, right? Or has another Watcher taken his place already? (Probably.)

None of this should be surprising, of course; Steve Rogers, post-Secret Wars, has become the world’s most fit 95 year old in Uncanny Avengers because, as much as fans might want Sam Wilson to be Captain America right now, Steve Rogers is too important a piece of intellectual property to leave off the table for too long. Similarly, The Mighty Thor might star Jane Foster right now, but Thor Odinson hangs around like a bad smell, waiting to take back the hammer at some undisclosed point in the future. All-New, All-Different might be the slogan, but the primary operating procedure of Marvel remains exactly the same as it’s been for years now: not change, but the illusion of change.

Of course, the fact that none of these characters are the “same” ones that died — there is, technically, a Wolverine buried under that Adamantium shell he was left in back in Death of Wolverine back in 2014, after all — is the kind of thing that allows both Marvel and Marvel fans to pretend to themselves and others that the deaths “stuck” and weren’t reversed or rendered useless by the fact that there was a spare lying around ahead of time. And, technically, they’re correct; if the only Wolverine you care about is the one who appeared in Uncanny X-Men #94 back in 1975, then, sure, he’s not around anymore. It’s just that, for all intents and purposes, there’s another guy just like him and he’s got his own book as well as his appearances in Extraordinary X-Men.

In a way, this wiggle room makes the doppleganger syndrome feels like even more of a cheat than straight-up resurrection; by saying, no, this really is a different character, honest, it allows creators to jettison whatever piece of history or mythology they don’t want to deal with (“This Wolverine never thought that wearing an eye patch and calling himself ‘Patch’ was a convincing disguise, that’d be dumb!”) and stealth reboot characters perpetually, fearlessly, keeping them pristine for whatever licensing opportunities might present themselves.

All of this has been buzzing in the back of my head since I read about the plotting session for April’s Civil War II, which launches with an Armageddon 2001-style reveal that one hero is destined to do a bad thing, which leads to said hero’s murder. I read that, and I thought, is that it? It feels all too cynically constructed to shock, and appeal because of that shock — and sure enough, Marvel Publisher Dan Buckley is quoted as saying that the death is “the marketing hook” for the book — and yet, utterly meaningless, because who cares if Speedball is killed before he has the chance to turn into Penance 2: This Time The Spikes Are Sharper? There’s probably a Speedball from Earth 278456 who’s been conveniently lost in Weirdworld this entire time, waiting to replace him in a relaunched Speedball series the month after Civil War II finishes — and better yet, this one wasn’t fated to do anything bad, so no moral problems there!

(I find myself thinking about DC’s multiverse, and the rarity of characters switching earths for any length of time. Those that did — Black Canary, Red Tornado, Mister Terrific in the current continuity — weren’t replacing existing characters. Perhaps that’s what DC was missing all along, the chance to think of the Infinite Earths not as the playground for multiple Crisises, but endless cannon fodder to make Death of Superman II, III and IV that much easier.)

And so, yes, sure; “Dead No More.” As a slogan, it’s catchy and frustratingly vague — but let’s not pretend that death has become an even more meaningless concept in Marvel’s comic book output in recent months than it was before.

12 comments on “No More No More: Graeme on Marvel’s Latest Teaser And Current Approach To Death”