I was, I think, surprised by how much I liked Archie #1, the first issue of the revamped version of the character by Mark Waid, Fiona Staples and an impressively game Archie Comics. (Although, given both Afterlife with Archie and The Black Hood, perhaps something like this seems dull by comparison; either way, the company might want to change its name to The Impressively Game Archie Comics nonetheless, if it keeps these movies up.)

It’s not that I didn’t expect to enjoy the book. I’m pretty much a fan of Waid’s work, enjoying everything I’ve read of his to varying degrees (The drawback with his lengthy stays on books like The Flash and now Daredevil is that, towards the end, there’s a sense of unease that could either be familiarity breeding contempt on my part, or Waid becoming disinterested in the character on his), and Fiona Staples’ work on Saga has continued to be a highlight of that series even as I’ve become increasingly convinced that the book doesn’t have the direction or focus that I initially thought it did. Put those two flavors together, and how bad could it be, right? 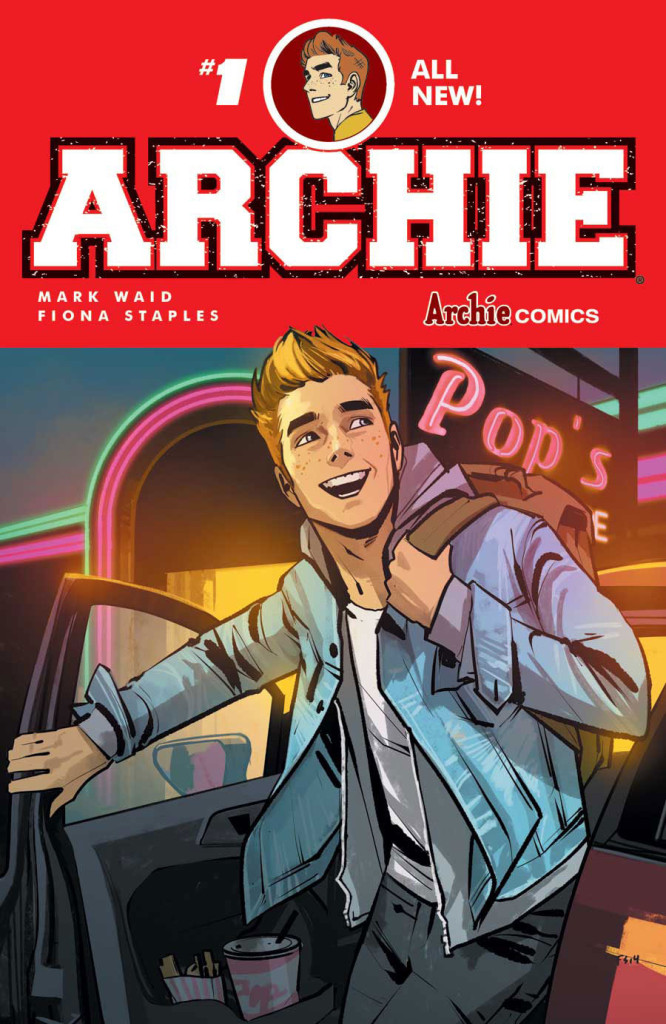 But I enjoyed it more than whatever expectations I’d had. I couldn’t even tell you what those expectations were, now, but I remember clearly thinking, early on in the issue, that it wasn’t what I was expecting and instead was something far better. The format of the series is changed significantly, and the genre, too; this isn’t the get-in-and-get-out comedy of Archies of old, with a ridiculous situation offering the chance for boffo yuks over however many pages before settling into a speedy resolution and inevitably pun-y punchline; instead, it’s light-hearted soap opera, getting a surprising amount of its power from recasting Archie and Betty as lovers as fated as readers expect them to be, and then throwing a wrench in the works.

(That wrench isn’t Veronica, though; she’s not even in the issue. Spoilers!)

What’s really surprising about how much I liked the issue, though, is realizing that what Waid has really done with the book is turn it into Saved By The Bell. I’m only being slightly sarcastic, because Archie has very much usurped Zack Morris’ habit of talking directly to the “camera” to explain backstory or introduce characters as needs be, and if you squint just enough, Jughead could be read as a far less annoying Screech Powers. Even the issue’s plot, which concerns an election to crown the king and queen of the prom, doesn’t seem too out of place for the show. Even as someone who has fond, I-was-a-schoolkid-and-it-was-trashy-and-addictive-viewing, memories of the series, there’s something slightly worrying about realizing that the “updated” Archie is essentially a kids’ sitcom from two decades ago.

And yet, it works, dammit. Perhaps because I am an old man who doesn’t understand how the kids are, and so therefore know no better, perhaps because the 1990s is still an update from a strip previously stuck in the 1950s, or perhaps because Fiona Staples makes things look charming as hell (There’s a sequence where Betty melts in the background as Archie talks to the reader, and it’s just great). Maybe it’s all three.

I might just be an easy sell on this stuff; I liked the corny old Archie stuff just fine, mixing the appeal of the art with a kitschy appreciation of the humor that never left an obvious gag unused, even if it had to struggle to find a place for it. All I know is that I finished the first issue of the revamp thinking that things felt fresher, and yet still appropriately Archie-esque. All hail the redhead kid from Riverdale.

One comment on “Pals & Gals: Graeme Digs The First Issue of The New Archie”