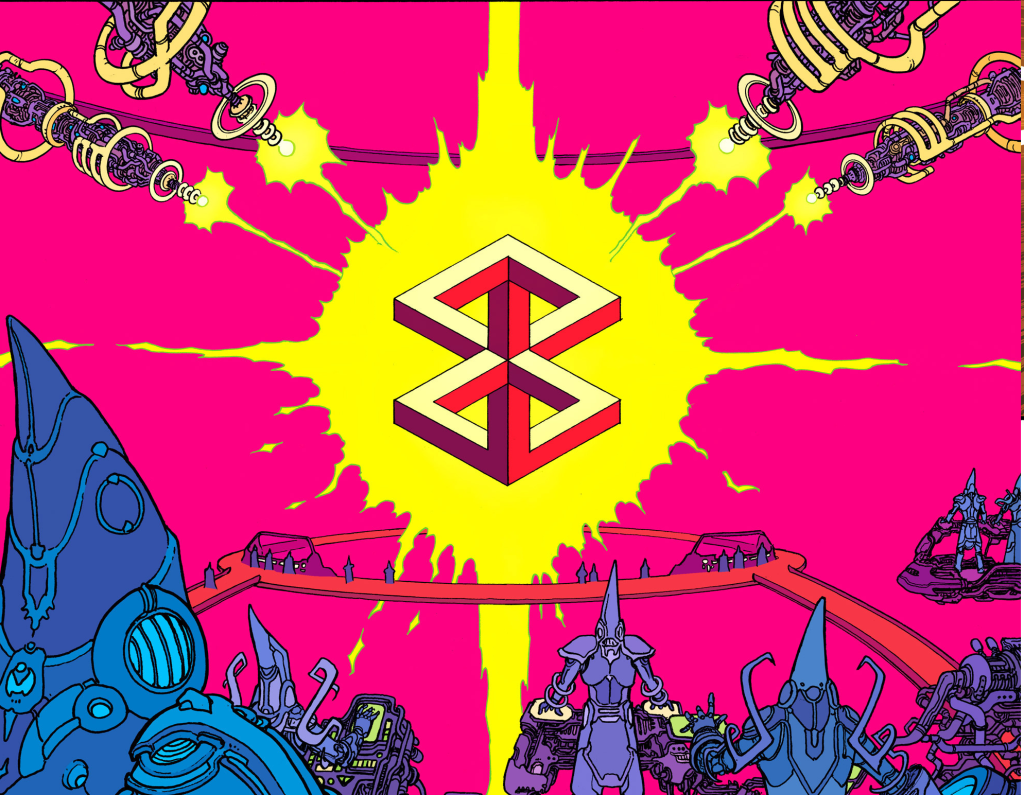 Huh.  I was originally going to put this all up-front, no behind the jump shenanigans, but then I realized my choice of Nameless images (from those available on the web) may not be the kind of thing  everyone would be into?  So join me behind the jump for some gab about two recent comics, Ghost Riders #4 and Nameless #5! 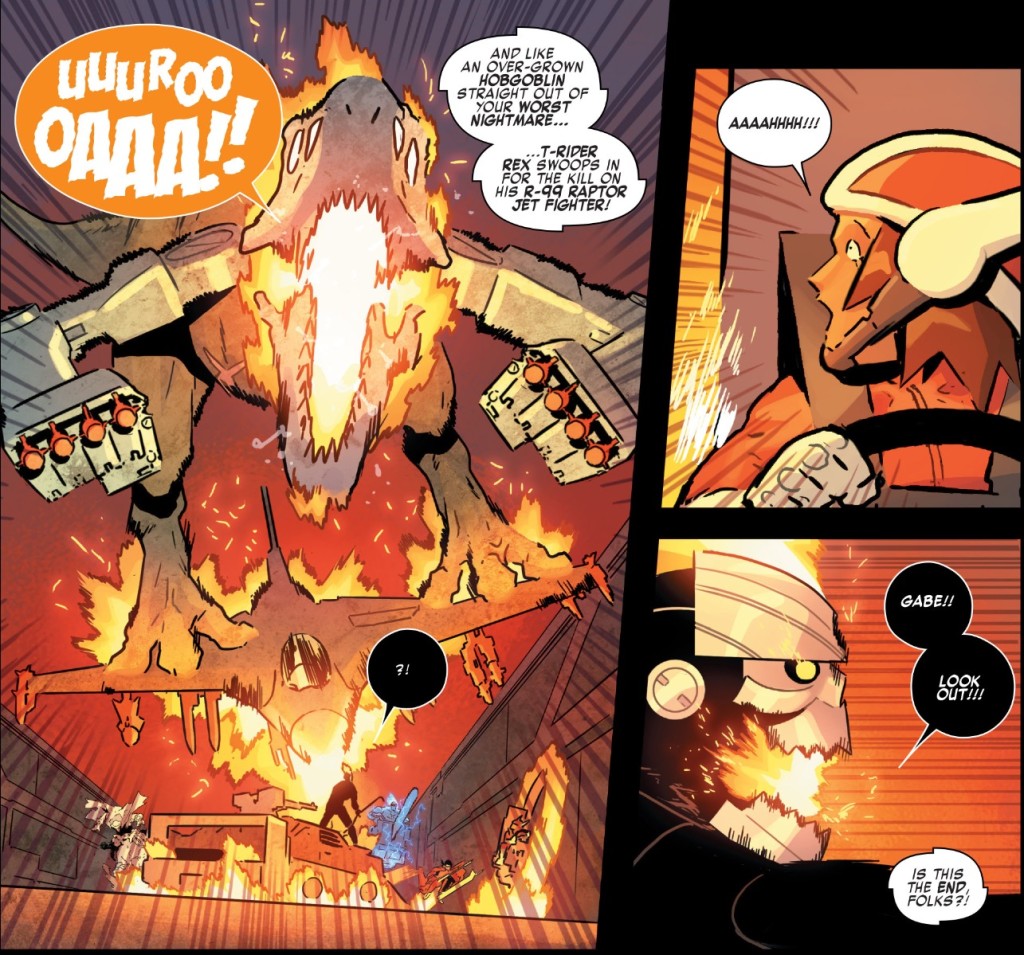 GHOST RIDERS #4:  Huh. It’s interesting how you can read a miniseries and realize you’ve been deferring judgment on something until the whole thing is done, even though you know deep down there’s no way the final issue could deliver enough satisfaction to make the entire reading experience worthwhile.

I mean, I guess that’s not entirely true:  on a quick reread of this final issue, I can see how the issue might’ve made it.  Felipe Smith really ups the noise here and tries to take an over-the-top concept and make it even more so:  after all, this is a book where one of the Ghost Riders is a T-Rex skeleton riding a jet fighter, and features a sequence where the villain is not only knocked out of the sky, but has his eyes gouged out and then, weeping blood from his blackened sockets, is run over on the track by all the other Ghost Riders he’d imprisoned and tortured.

In other words, it’s not so much a comic book as the storyboards for a crazy-ass anime guaranteed to make teenage boys spray energy drinks out their nose: you can practically hear the squeals of electric guitar that should accompany every collision.  (I assume Marvel Animation is busy cranking out movie-infused animated features starring the characters on whatever t-shirts the Disney stores are carrying, but it’d be amazing if a tastemaker there realized what they could do with this miniseries.)

But since artist Juan Gedeon isn’t up to the task, no matter how many violet speedlines colorist Tamra Bonvillain drags and drops onto the page, Smith’s gambit to double-down on the insanity doesn’t pan out.  There’s been no arc to the characters or to the theme—nor any theme, let’s face it—nothing other than “here’s my crazy situation, here’s how the crazy situation works, here’s the escape from the crazy situation, here’s why we have to return to the crazy situation and beat it.”  That’s perfectly okay if you do it right—you’ll notice I just described the plot of Mad Max: Fury Road, for example—but if you don’t, things feel especially inert, and people who invested time and money in it are much more likely to feel especially chump-like.

And yet I’d be lying if there wasn’t something in this mini that ker-twanged some crucial note on my fanboy piano.  It could be early exposure to Speed Racer means I’ll always be a sucker for races with death traps, but I think it may also be that this book, by being so set in its own deranged reality, reminded me of of the charms of outside-continuity Marvel comics.  In terms of what it’s trying to accomplish, Ghost Riders is a million miles away from McGregor and Russell’s Killraven, or Buckler’s Deathlok, or even Gerber’s run on Guardians of the Galaxy, and yet, like them, the mini is also a crazy-ass little corner of the Marvel playground, a sandbox where superhero comics are wedged up against disparate influences from far outside superhero comics and then set puttering about a thoroughly unapologetic dystopia.

But, yeah, this didn’t pan out.  And since I could’ve just waited it out and read it on Marvel Unlimited, this wasn’t an especially smart use of my money.  For whatever reason, I can’t hate this too much…but I can’t recommend it either. 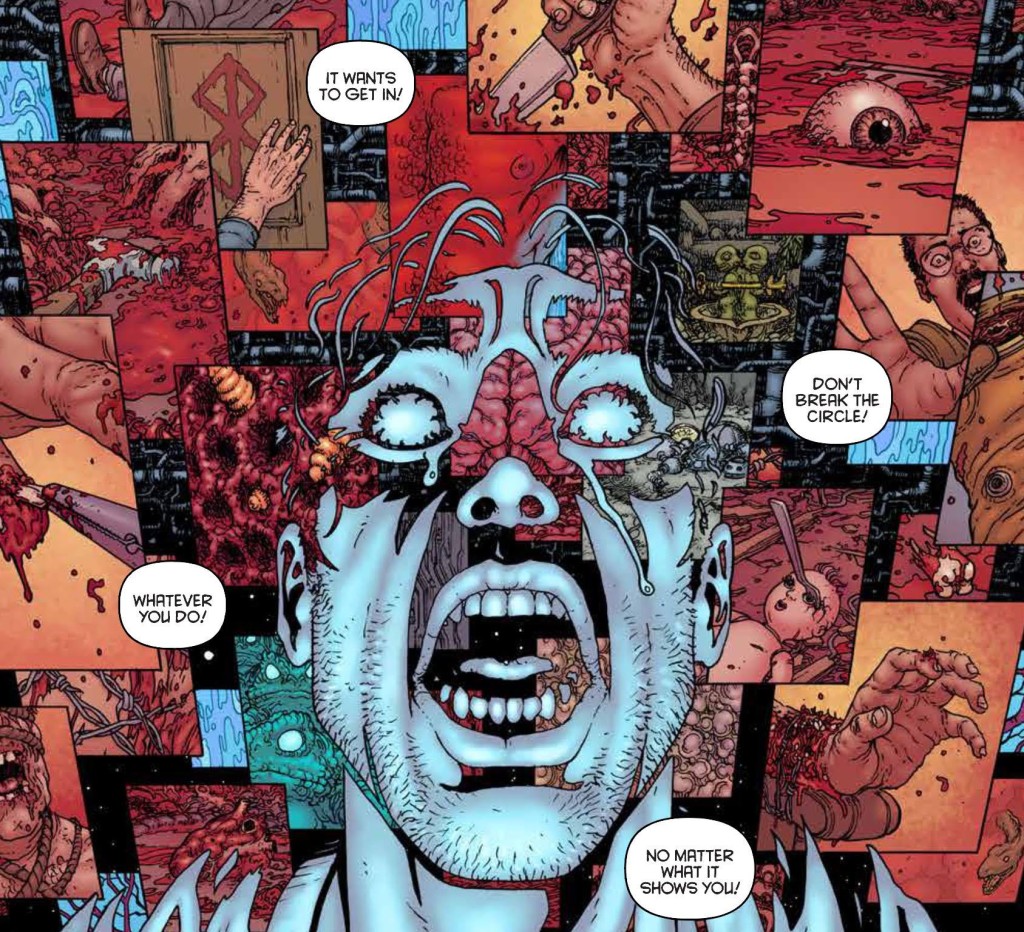 NAMELESS #5:  If I’m remembering correctly, I mentioned this book on the upcoming podcast but only as a touchstone to a larger topic.  So I don’t feel like I’m double-dipping by telling you how delightful it’s been to read Grant Morrison and Chris Burnham doing off-brand Constantine.

Morrison is second only to Warren Ellis in his ability and desire to create thoroughly enjoyable Constantine knock-offs, as both seem to realize how potent the character is as both satisfying story engine and archetype.  Like James Bond or The Man With No Name (not be confused with our hero Nameless, or at least not accidentally), John Constantine is a four chord song, capable of spawning nearly-infinite pastiches each able to deliver at least some modicum of reader satisfaction. (And like J.B., J.C. is a blend of hyper-competence, ironic self-awareness, and toxic masculinity.)

So, yeah. Event Horizon with John Constantine? Deeply enjoyable, especially since Morrison is savvy enough to give Nameless his own “Newcastle incident,” which he recounts in this issue and, as you might expect from G-Mo, gets woven into the present storyline to try and fuck with your understanding of what is and isn’t real.  Unless this is your first visit to the Grant Morrison rodeo, there’s no real surprise to it but I’ll be damned if the guy doesn’t creep closer and closer to his “pop story as pop song” ideal: the delight is in the delivery, and I found myself genuinely delighted.

And in that regard, Morrison is inestimably aided by Chris Burnham, who is dangerously close to unseating Frank Quitely as all-time greatest Morrison collaborator.  Like Quitely, Burnham is able to to present dimension bending layouts and play with the speed of sequences on the page to give Morrison’s stories the hyperreal feeling they demand, but whereas Quitely’s art, like work in the ligne claire style, frequently requires color to give it contrast and heft, Burnham’s linework can feel loose and exuberant in a way Quitely’s doesn’t, something just noisy enough to feel crazy but never to the point of being out of control. This may sound odd, but for me Burnham is the Jim Aparo to Quitely’s Neal Adams: there’s little doubt he’s derivative, but thanks to his own considerable chops and the greater frequency with which he appears, I’m starting to prefer the former to the latter.

And so, yeah.  It’s two talented guys noodling out exactly what you’d want if someone told you there was a “Constantine in space” story.  I really like it.  I think it’s a bit of a shame we’re not going to get more adventures of good ol’ what’s his name. I’m digging this lots.