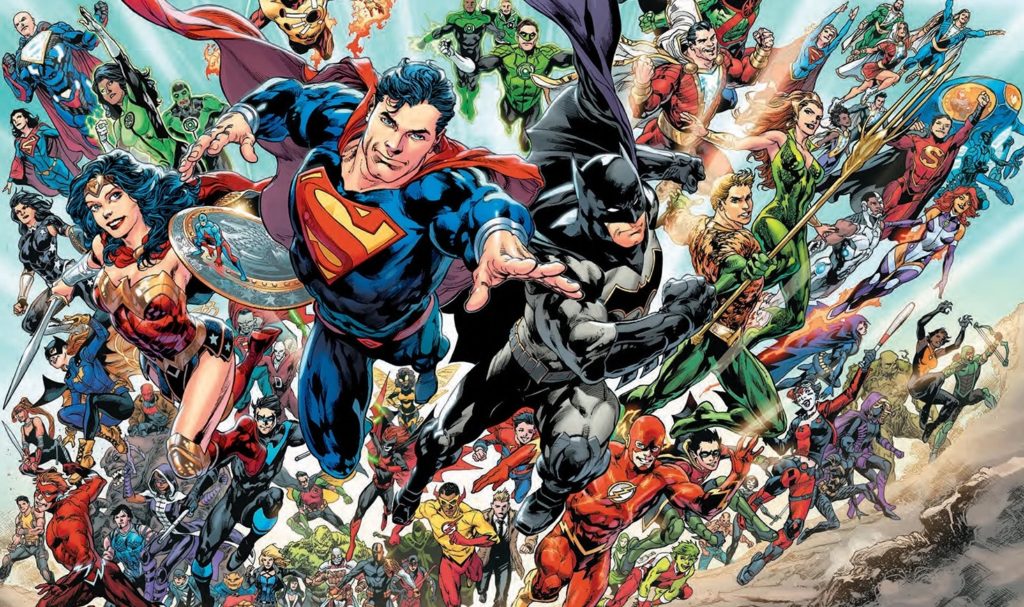 The transformation of DC Universe from, essentially, a TV and movie delivery system with some comics to what will be DC’s version of Marvel Unlimited with some TV shows and movies is something that I’m sure Jeff and I will be talking about in the next episode, if only because it’s an announcement that finally got Jeff to sign up for the service. That said, I’m going to take a few minutes to share some thoughts right now, just because. Follow along under the jump.

For those who didn’t see the news late last week, DC announced that it was radically shifting focus with the comics reader element of DC Universe, starting sometime this month. (The actual date wasn’t given, but I was told “sometime in April.”) What had, to this point, been consistently described as a “curated” collection of comics that would be updated on a monthly basis to swap titles in and out based, seemingly, on what was happening elsewhere in DC media, was going to become “the ultimate digital comics library,” with more than 20,000 issues being made available and more being added on a regular basis.

This is a big deal. To put that 20,000+ figure in some context, Marvel Unlimited is only now boasting of having 25,000 issues available, and it launched in 2007. DCU, according to DC folks I talked to, is going to add more than ten thousand comics to the service at the flick of a switch sometime in the next few weeks. (Newer comics will be added 12 months after release, as opposed to MU’s 6 month window; that program starts this month, too.)

The news is both a surprise — DC has long rejected calls to have its own Marvel Unlimited service, as recently as DC Universe’s roll out last September making an argument for a smaller selection — and something that feels like the culmination of a bunch of different things that have been happening in the background for awhile. DCU significantly upped its comic count at the start of this year, to much happiness from subscribers, but its worth noting that only happened after DC joined Amazon’s ComiXology Unlimited program, making a portion of its evergreen library available digitally elsewhere. Something, somewhere, had changed how DC as a company viewed the digital subscriber space.

It’s not hard to imagine what that something might be. In two senses, DC has a new boss now, after all: Pam Lifford is the executive in charge of DC as of September last year, thanks to a Warner Bros re-organization that placed DC in an entirely new space inside the larger corporate structure. Beyond that, Warner Bros as a whole has new owners as of last summer, and it’s a telecommunications company. Rethinking a digital approach seems like a no-brainer in that light.

Also worth noting: The announcement followed two promotional pushes for DCU across March. For two weeks from mid-month, the first episodes of Titans, Young Justice: Outsiders and Doom Patrol were available for free for non-subscribers, and then, the first month subscription fee was 80 cents instead of the regular $7.99 to celebrate Batman’s birthday. (That’s still true, as I write; it ends April 4, for anyone still thinking about signing up.) For whatever reason, it feels like the thinking around DC Universe is shifting in a way I’m not quite able to put my finger on.

But maybe the digital comics library announcement has nothing to do with any of that. Perhaps this is a purely about how DC is thinking internally about its own material and how to get people reading. Certainly, the company’s relationship with its back catalog seems to be evolving; already solicited collections have been canceled, and co-publisher Dan DiDio is on record talking about DC rethinking its collections strategy. Maybe part of that rethink includes making the larger catalog available for DC Universe subscribers.

It remains to be seen what, exactly, will make up the DC Universe library. I’m assuming it’ll be essentially the selection available on ComiXology, ported over and potentially remastered. (All of the comics on DCU at launch had been remastered, at least, so that they could be viewed on hi-def TVs without looking janky; this was mentioned to me by more than one exec at the San Diego Comic-Con launch. I’m unsure if any user ever noticed.) But will there be more than just the ComiXology titles?

After all, there are a bunch of gaps in the selection over there — the selection of material from the ‘80s and ‘90s in particular is lacking obvious choices. (Hi, Millennium !) Will they be on DCU, where royalty payments could differ because they’d be part of a subscription service rather than being purchased individually?

I wonder, specifically, if the Gerard Jones issues of Green Lantern will be there; they had been on ComiXology at some point — I bought some issues myself — but aren’t there now, presumably in response to Jones pleading guilty to, and getting six years in prison for, possessing child pornography. Will those issues reappear as part of a larger collection where they can’t be purchased directly? Jones was the lead writer on one of DC’s core franchises for four years, writing multiple Green Lantern titles, as well as Justice League Europe with Keith Giffen. If they’re permanently binned, it’ll be a noticeable absence.

I’m just thinking aloud and kvetching, of course. (I’m not alone; I saw people responding to the DCU news by complaining about the reader crashing a bunch and the shitty alphabetizing that puts “The Flash” under “T.”) Really, when the trigger is pulled and the library is available, I’m going to lose my mind with happiness over what will be available. But, still. Isn’t thinking aloud and kvetching the Wait, What? mantra at this point…?