[FULL DISCLOSURE: When I started writing this piece, it was entitled “Matt on Secret Empire #3″. Then it sat there, eventually becoming “Secret Empire #3 & 4″. When #5 was released, I *thought* about updating this but couldn’t be bothered. And somehow, here we are today, at “Secret Empire #3 – 6″. That foot-dragging delay all by itself is probably a more accurate summary of my reaction to these issues than anything I could write below, but what the heck–I’ll give it a shot anyhow. I’ll start with my original content and jump in with these notes where applicable.]

One of my foundational points in what has turned out to be an ongoing readthrough of Marvel’s Secret Empire event is that I didn’t understand the strength of the backlash against Nazi Cap. My argument, initially, was that this was just another incarnation of a fairly stock comic book story, and not nearly worth the fuss it was eliciting.

After reading Secret Empire #3 and 4 [NOTE: and 5 and 6], I have to walk that back: it’s barely even a story of its own, and not worth any fuss at all. But I can’t shake the feeling that the backlash itself is partly responsible for rendering this story so toothless.

Let me quickly summarize what happens in these issues, so we’ve got that out of the way: Hydra continues to run the U.S. The ragtag heroic resistance continues to try to find the Cosmic Cube fragments to fix everything. On a macro level, that’s about it. It’s not so much wheel-spinning as it is grimly plodding forward with the inevitable plot beats. [NOTE: That paragraph was written after issue #3. To update it for the THREE ADDITIONAL ISSUES that have come out since, I would add “…but Cap seems to be a step ahead.”  after “fix everything”. That’s it. After three more issues–also known as THIRTEEN more dollars.]

On a micro level, a little more happens. The Black Widow establishes herself as a leader of a group of idealistic young heroes, but also as a grim and gritty ends-justify-the-means problem-solver willing to torture and kill. Hank Pym (or possibly an incarnation of Ultron that thinks it’s Hank Pym) has established a colony of Ultrons in Alaska, where he has a Cube fragment. He captures squads from both sides of the conflict and they all argue with each other. The resistance gets the fragment. Namor gives another fragment to the Hydra side. Cap implies that there’s a traitor in the resistance. [NOTE: That paragraph runs through issue #4. In #5 and #6, each of those plots advances incrementally.]

Oh, and all the while the bearded, noble version of Steve Rogers is having some heavily symbolic, dream-logic adventures that probably mean that he’s Cap’s subconscious trying to reassert itself. [NOTE: ibid.] 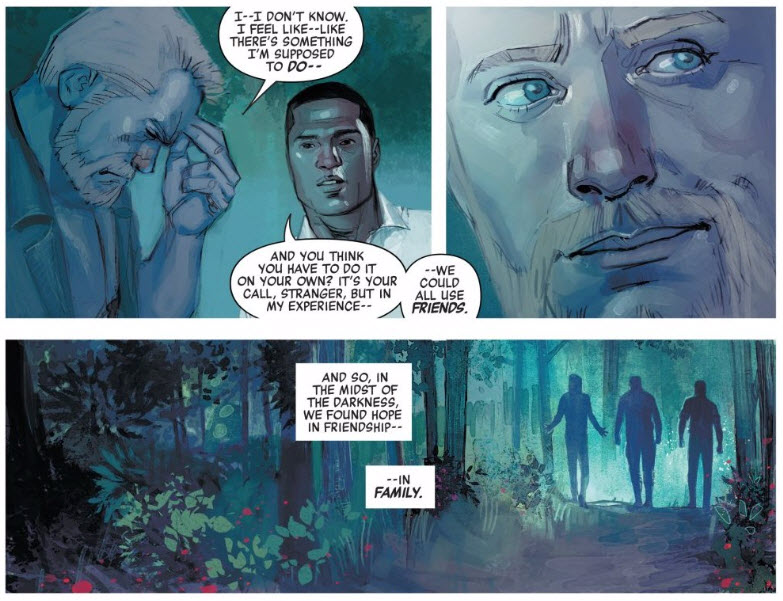 It is all written very competently, if not compellingly so. Art on issue #3 is more Andrea Sorrentino stuff, so it looks gorgeous and abjectly fails to clearly tell the story. Issue #4 is drawn by Lenil Francis Yu, so it’s a little more fundamentally clear; I miss Yu’s cleaner-lined stuff from his very early days at Marvel, but even in this scratchier incarnation he has a solid understanding of how to work a series of panels. [NOTE: #5 is Sorrentino, Rod Reis, and Joshua Cassara & Rachelle Rosenberg, and it looks just like an issue that has hurriedly had extra artists brought on, either to stay on schedule or to redraw pages for some reason. #6 is Yu, with Reis, and Cassara & Rosenberg, but it holds together a little better than #5 did; Yu’s style is a little closer to the other two, so the stylistic jumps are less jarring, and the whole thing is much easier to read.]

[NOTE: This is where I resume writing the post again, post-issue-#6.] But, my lord, NOTHING is happening in these comics. Very little that’s interesting, anyway. There are a couple of cool moments in #6 (including a nice hero moment for long-absent favorite); the bonkers Hank-Pym-as-Ultron stuff is pretty fun; and … I mean, there’s a lot of purple narration, if you like that sort of thing. A few mysteries are strewn around (WHO is the old man? WHAT is going on with Bearded Steve? WHY is this taking so many issues to tell?) and it’s certainly not incompetent work, but it’s absolutely nothing new.

Which is why I think it’s been watered down. The reason Hydra Cap riled people up so much is because there’s something inherently interesting there–exploring the fascist rot in America is a somewhat compelling idea, germane to our times, and poisoning Captain America was certainly a way of doing that. But … they haven’t done that. Instead, it’s being pitched as yet another ideological struggle between Cap and Iron Man. Civil War 3, if you will. Their previous conflicts are overtly referenced in dialogue throughout (including a heartfelt dramatic speech at the climax of issue #6), and even echoed in the art.

I mean, we get this panel in Secret Empire #6:

..or maybe from last year: 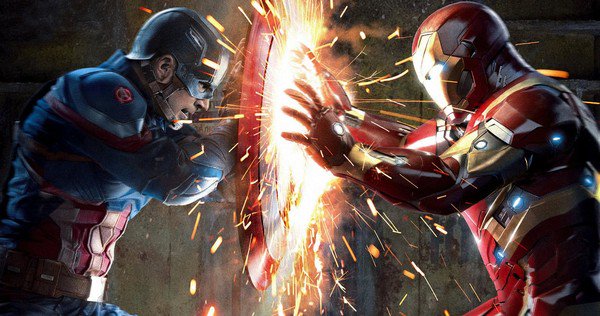 Say what you will about Cap as a real, live, true-believer  Nazi. Say it’s a betrayal of his creators’ ideals. Say it’s a variation on a familiar Cap-crisis-of-faith story. Say it’s of questionable moral or ethical value. But at least it’s not the exact same story they’ve been pushing again and again for a DECADE now.

And I can’t shake the feeling that Secret Empire was supposed to be a more interesting story, but that someone–Marvel editorial? Marvel marketing? Nick Spencer? All of the above?–got real worried when the internet just annihilated the basic concept. Which would explain the dialed-back feel to the Nazi Cap elements of the story, would explain the patchy art jobs, would explain the belated need for an additional issue, and would explain why the story itself, for all the pre-release bombast, feels so weightless and familiar. 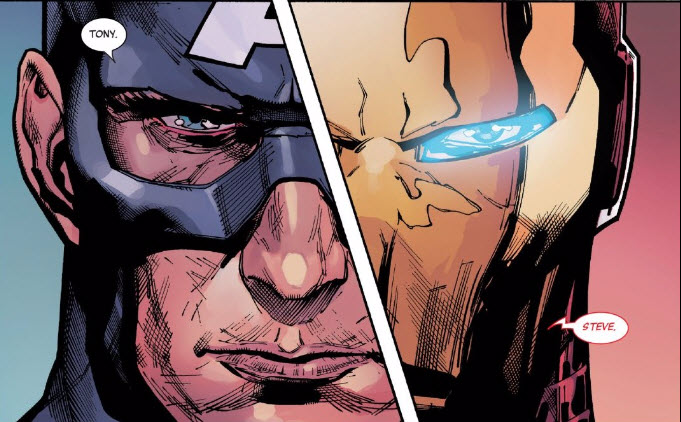 4 comments on “Sound and Fury Signifying Nothing: Matt on Secret Empire #3 – 6”