Writing about Marvel’s Secret Empire event has been…not fun. It’s not the sort of book that lends itself to an amusing snarkread, but it’s also largely felt so bloated that there hasn’t been much to say about each issue. I’ve tried to point out specific areas where I felt the series was coming up short, but I can feel myself occasionally drifting over into vague complaining.

Well, good news! Secret Empire #7 was a marked improvement on nearly every area of the book I’ve complained about. Sure, it was still a bleak, depressing story possibly too in love with its own grittiness. And, sure, you could argue that after six issues (plus a zero issue, plus a Free Comic Book Day issue, plus a bunch of tie-ins), the plot certainly SHOULD be kicking into gear.

But to focus on that would be churlish and needlessly downbeat. Let’s focus on the positives, just this once. (Please note: focusing on the positives is going to require some very direct SPOILERS for this issue. If you haven’t read it or had the major plot events revealed elsewhere on the internet, click away now.) 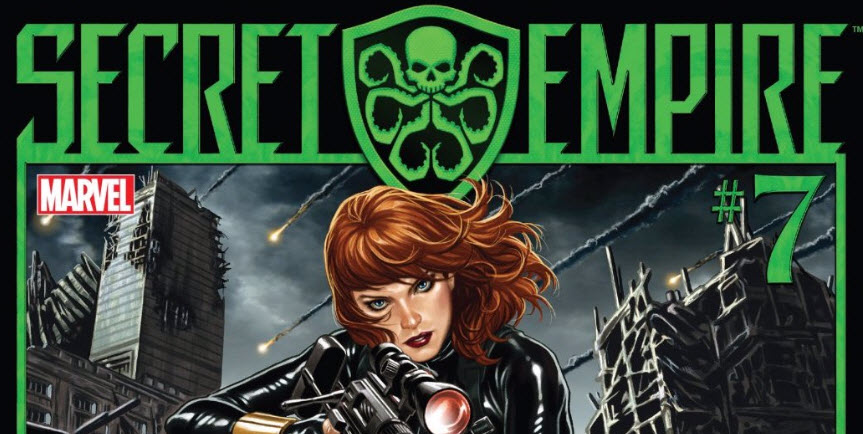 Okay, the easiest way to do this is probably just to look back at my endless complaining and directly point out how this issue succeeds in those areas even while previous issues had failed. (But, seriously: SPOILERS!)

“Nothing is happening!” If the last four issues have just been wheel-spinning and kicking up mud, this was the moment where the tires finally caught some solid ground and the car shot forward. Black Widow’s plans finally kick into motion–she’s going to assassinate Cap while The Champions cause a distraction. The old man’s identity is revealed–he was a trapped Mosaic. (Which, okay, whatever. But at least it was a resolution!) Sharon Carter takes some action! Sam Wilson makes a decision! Dreamworld Beardy Cap escapes Dreamworld Red Skull! (Which, again, whatever. But at least it feels like dreamworld forward progress!) Even the trapped-in-space plotline seemed to be inching toward resolution, including some decent extended character beats!

On the one hand, I can’t shake the feeling that the last few issues genuinely were just padding and throat-clearing. I don’t know what–maybe writer Nick Spencer was buying time for one of the artists to catch up. Maybe they were trying to sync up the timing with some other event on the publishing calendar (or the actual, human calendar). Maybe they were frantically revising the story in progress to account for fan response. Whatever the underlying reason, at least for the moment it feels like we’re through that stretch, and plowing forward through significant events, moving characters AND plot along with us.

“As a character, Evil Nazi Cap is watered down and isn’t doing anything all that bad!” Well, now he sure is: I’d call brutally killing one of his longtime friends (and one of Marvel’s most visible, popular female characters) pretty bad. Following it up by jailing his longtime romantic partner and promising to declare war on…um…someone is also not super good. There sure is no way Captain America can come back from this! (Which is exactly the stakes I’d want in an event like this.) (Even if it’s patently, clearly going to be undone.)

If you want to call Black Widow’s death cynical or exploitative, I’d be hard-pressed to defend it. It’s not a fridging, exactly, but it IS choosing a female character to be the one who gets killed to establish the “real” stakes of the event. It’s also the trigger to drive Miles Morales to almost fulfill his Civil War II-promised destiny of killing Cap (which WOULD make it a full-on fridging, I guess?)–except that in the end it’s the lessons Black Widow tried to teach him in her life that causes Miles to hold back. Despite all of that, I thought it was reasonably well-handled, as such things go, and the moment really did land as a strong emotional beat. (Partially due to the art, which I’ll get to below.)

But the main reason I don’t think it’s a cynical disaster is the same reason I’m happy that they finally went all in on evil Captain America: because at this point, it’s clear that there’s definitely gonna have to be a major, cosmic-level reset at the end of this event, so they might as well go full What If–? and start killing off characters willy-nilly.

(The story isn’t even bothering to try to hide the eventual reset, really. Not three pages before she gets killed Natasha gets an earful from Frank Castle about how Cap promised that, once he had established his perfect world, he’d bring back all the people who had died in its making. The only way this could be more overt is if the phrase “Death in only temporary in this story!” were printed over and over again in the margins in neon ink.)

“The art is letting down the story!” I’ve complained about Andrea Sorrentino’s art in the past, claiming that it favors style over storytelling, that his layouts subvert the writer’s intentions for the page, etc. etc. etc. ad whateverum. And there are points in this issue where those complaints hold. (The Frank Castle reveal doesn’t pop out the way I think it’s meant to, partially because the HydraPunisher symbol doesn’t look–at that size and in peripheral view–all that different from the sort of random Hydra symbol Sorrentino might’ve just dropped on the page. And it took me a very careful review of some fragmented-action panels to figure out exactly how the Widow had, logistically, managed to stab and disable Castle.)

But for all of the big moments here, Sorrentino shines. The pacing of the scenes leading up to the Widow’s death works–you can feel her slogging through the fight to get to Miles and Cap. The inset X-ray panel–the sort of filigree that I’ve been annoyed by in the past–works to sell the impact of Cap’s shield on Widow’s head more viscerally than any other I can think of. That panel made me cringe in sympathetic pain, like watching someone slip and fall facefirst on marble steps.

And the three panels of Widow falling to the ground, her eyes closing–keeping her head “upright” in frame while the ground rotates around to meet her–felt sad and final and awful in a way that comic book deaths (in all their inevitable impermanence) rarely do. 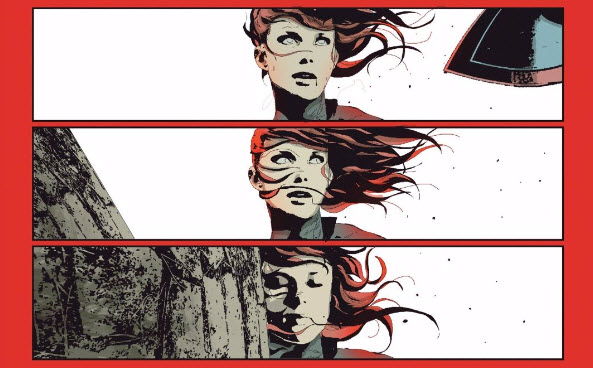 The panel of Hawkeye giving an anguished scream at hearing about Widow’s death sells the melodrama of the moment, but–more importantly–it also uses the arrows in Hawkeye’s quiver as both a design element AND a way to quickly identify who we’re looking at, despite the wash-out of color and the lack of a distinctive mask. (In contrast to scenes in previous issues–notably the Mockingbird one I reference here–where I had literally no idea who I was looking at.) 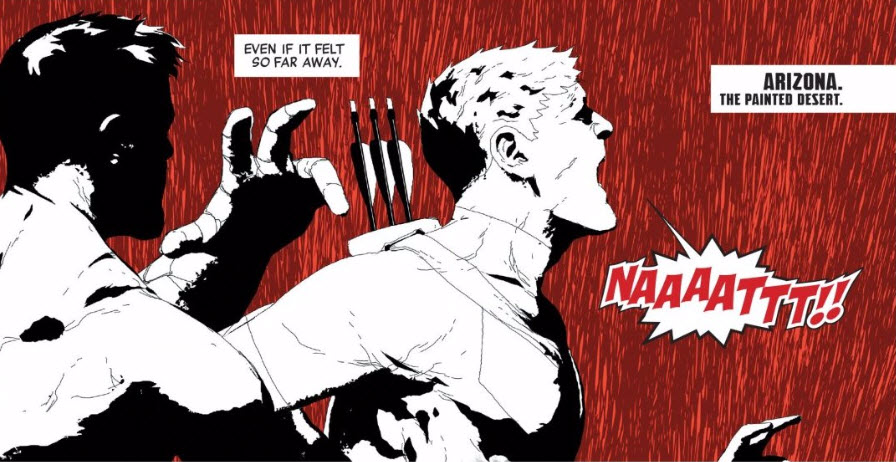 Even the final panel of Sam Wilson does an excellent job of conveying the intended vibe of battered-but-resilient hope. Throughout his pages of this issue, Sorrentino adds to the storytelling gestalt of the comic–which is several huge steps past where he was before (i.e. actively making the comic harder to read).

“It’s just a rehash of previous events!” Well, look: it’s still just a rehash of previous events. But, really, all these events are going to have an inevitable sameness to them, depending how much you want to abstract your description of them. The key comes in how well you tell your iteration of the story. And this issue marks the first time in the entire Secret Empire series that I felt like it was really doing a credible version of the ur-21st-century crossover event. Hopefully all the padding is out of the way, and we’ll get to see a straight sprint to the finish…and to the inevitable accompanying cosmic reset. 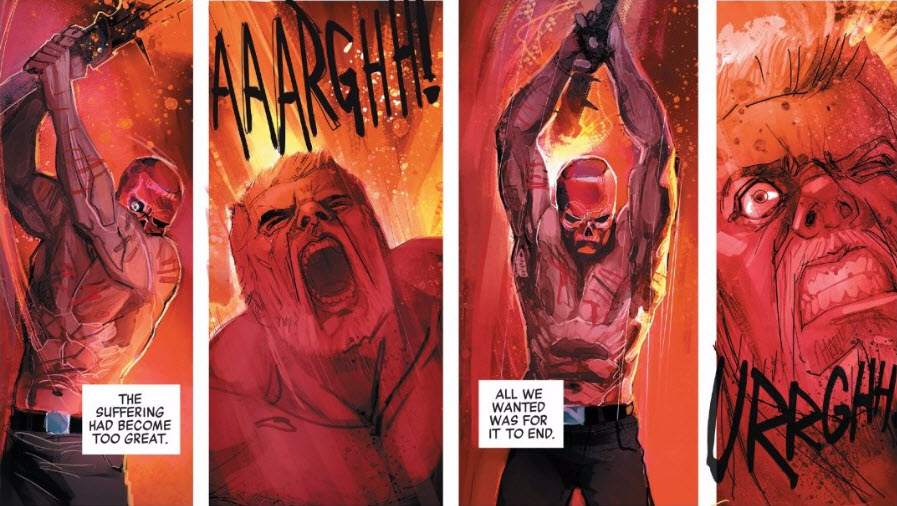