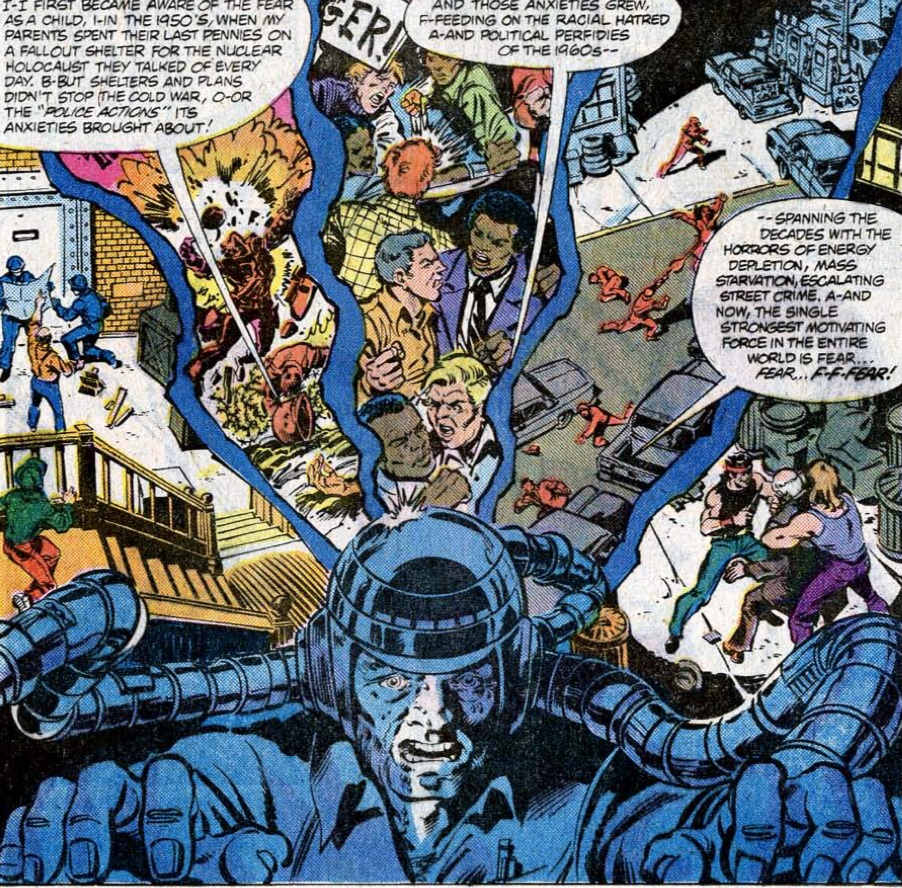 00:00-10:01: Greetings! It’s a very subdued greeting this time around—probably because Jeff tried to outsource all of the introduction work to Graeme. It’s been a tough couple of weeks, and we find ourselves clinging to the potential optimism of current pop nerd releases. Also mentioned for its timeliness: Genius by Marc Bernardin and Adam Freeman, currently being released weekly from Top Cow. 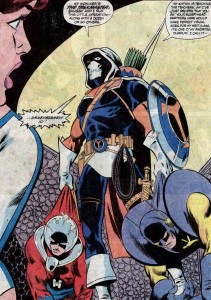 Wow, he beat up both Ant-Man *and* Yellowjacket!

10:01-1:04:21: Should we talk about Avengers #175-200, first? Yes! Are they some of the dullest comic books we’ve ever read? YES. Join Graeme and Jeff as they wonder how 25 issues with art by John Byrne and George Perez, writing by Steven Grant, Mark Guenwald, Roger Stern and especially David Michelinie, the debut of Taskmaster, an “epic” restructuring of the origin of Quicksilver and Scarlet Witch, giant robots, and the Absorbing Man can be so distressingly dull. PLUS, the jaw-dropping Avengers #200, an issue involving time-displaced rapey incest and not just some of the worst treatment of a superhero ever. Although we start talking about it earlier, Graeme tries to recount the plot around 37:27, which is followed up with Jeff’s dramatic reading of a truly terrifying infodump. Ever-timely Jeff brings up Luke & Laura from General Hospital, and much-more-timely Graeme mentions the 17th episode of Rachel & Miles X-Plain The X-Men wherein Rachel and Miles discuss Avengers Annual #10 and how it very specifically addresses this story. (Although we didn’t re-read AA #10 for this podcast, we also discuss it but, really, who cares about us.) If you’re interested, here’s a link to the fandom article about Avengers #200 that first addressed a lot of this issue’s problems.
1:04:21-1:30:14: As for comics from this century: The Multiversity #1 by Grant Morrison, Ivan Reis, Joe Prado, and Nei Ruffino. We are indebted to the annotations of the first issue by David Uzumeri, and a stellar post by Cheryl Lynn over at Digital Femme. But don’t worry, we also have our own thoughts about the book. (Boy, do we.) Discussed: Cartoon physics, the forces of pessimism, Bryan Hitch, All-Star Superman, JLA One Million, and the need for fluidity, possibility and the possibility of ideas.
1:30:14-1:36:23: The same week Jeff picked up The Multiversity #1, he also picked up a book from a few weeks earlier with a story that takes many of the same ideas and proceeds down a different path with them: “Grandeur and Monstrosity,” by Alan Moore and Facundo Percio (colors by Hernan Cabrera) in Avatar’s God is Dead Books of Acts Alpha.
1:36:23-1:49:01: Another interesting comparison/contrast to The Multiversity, courtesy of : The Fade-Out #1 by Ed Brubaker and Sean Phillips.  Is it the ultimate Brubaker/Phillips book in the same way The Multiversity feels like the ultimate Morrison book? Also mentioned: Abhay’s follow-up discussion over at the SavCrit of the conclusion of Fatale; female agency in Fatale and in Velvet; the conclusion to the first arc of Catwoman as recounted by Darwyn Cooke (and as recounted by Jeff) ; and more.
1:49:01-1:53:23: Little Nemo: Return to Slumberland #1, by Eric Shanower and Gabriel Rodriguez, with colors by Nelson Daniel. A gorgeous book, but how does it read? Is it worth the dosh? Does Nemo end up all a-tumbled out of bed with one leg higher than his head?
1:53:23-2:10:13: Infinity Man and the Forever People #3 by Dan Didio and Keith Giffen, Jim Starlin, Rob Hunter, and colors by Hi-Fi. Jeff appreciated the Starlinisms; Graeme pretty much hated the Starlinisms but what did Graeme really like? Teen Titans #2 by Will Pfeifer, Kenneth Rocafort, and Brown. Ladytron, Manchester Black, and Josiah Power?! Those are some crazy characters to be popping up in a book, dontcha think? And Jeff has some mixed feelings about Batman and Robin #34 and how it leads in to the Five Years Into The Future/Future’s End event. And because of Graeme’s review of Grayson #1 and #2, Jeff picked up those issues and really liked them.
2:10:03-end: Closing comments! Places to look for us at—did you know we’re on Stitcher now? Is that a thing you use? If so, follow and review us there! And, of course, we encourage you to check us out on Twitter (), Tumblr, and, of course, on Patreon where, as of this count, 73 patrons make this whole thing possible.

You should be able to play this episode above, below, on iTunes, on Stitcher,  and RSS:

As always, thank you for listening, and we hope you enjoy!