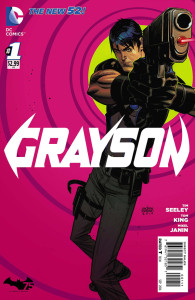 Two issues in, and DC’s new Grayson series is, if anything, even more enjoyably off-kilter than it was to begin with; for a series with such an grounded concept — it’s Dick Grayson, faking his death to go under deep cover for Batman! — and, let’s be honest, a final issue of Nightwing by the same writers as this series, it wasn’t a book that promised much. And yet, with the second issue, it unfolds its freak flag just a little bit more and continues to have fun with the toys it has to play with.

Dick Grayson is, of course, a character full of potential. The first issue’s terse opening, attempting to echo the All-Star Superman launch by summarizing the different stages of Grayson’s life (“Sidekick. Sensation. The Boy Wonder. Robin.”) hints at this, but it’s what follows that properly illustrates why this series works: Grayson isn’t a spy; he’s a showman, and even though he’s very good at what he does, he’s working against type here, and that that tension — that he is more light-hearted, more “fun” than the genre traditionally allows, at least in contemporary thrillers — is what makes the book so charming to me.

Well, part of what makes it so charming. It helps considerably that Tim Seeley and Tom King, the writers of the series, seem to hew closer to Grayson that grim and gritty so far. It’s not just that Dick is having fun despite himself, the series is, too; how else to explain the appearance of dialogue like “You may have taken out my boys Choker, Puncher and Drowner. But you ain’t never gonna break the Cycles of Violence?” coming from the leader of a biker gang in the second issue, or the introduction of The Authority’s Midnighter as the antagonist of the series (A role he plays remarkably well; it’s tempting to suggest this is the best use of the character since Ellis created him).

Mikel Janin’s art is also a selling point. Long one of DC’s secret weapons via his Justice League Dark work — I maintain that the work he did with Jeff Lemire (and later, Ray Fawkes as co-writer) on that book between #7 and #21 is some of the most underrated New 52 stuff to date, again despite a relatively weak premise — this is hopefully a series that’ll see him rise to greater prominence and his clean, kinetic lifework get the attention and praise it deserves.

Grayson is the spy book that you wouldn’t expect in the current DC firmament for a lot of reasons: it’s fun, instead of grim (Not only does it tie into Grant Morrison’s Batman, Incorporated in subject matter and tone, but there are also Avengers nods — not the Marvel team, but the Steed and Mrs. Peel team), it doesn’t tie into the dominant, Jim Lee-inspired visual style, and it can — and arguably should — be read independently of the other Batman books.

While books like Batgirl and Gotham Academy appeared to herald a new DC when they were announced last month, it’s possible that Grayson might have been the stealth launch of the future of the publisher all along. Here’s hoping everything stays on target for the foreseeable future. 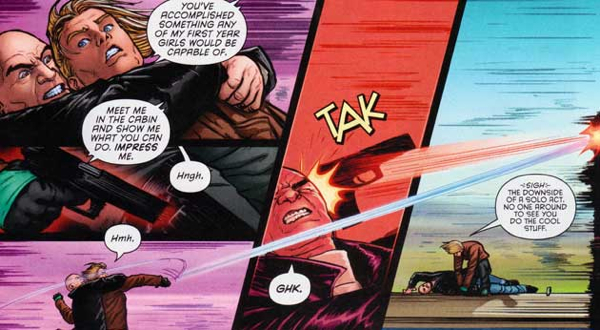