0:01-18:33:  Greetings from Graeme “Back From The Wars” McMillan and Jeff “Loverman” Lester!  We only have time for the briefest of Billy Bragg references before we’re off to the coverage of San Diego Comic-Con 2019, as only our embedded correspondent can provide!  It was a very weird show, with some strange arrangements and a lot of off-kilter preparation.  It’s not worth putting a time stamp but at one point, Graeme mentions that the combined DC/Warner Brothers booth was so big Jeff’s apartment could’ve fit in it four times.  Well, in editing this, Jeff checked with Edi (who actually has an ability to remember numbers and understand spatial relationships), and ran the actual booth size—two floors of 6500 square feet total—and the actual answer?  Jeff and Edi’s apartment could fit in that total square footage EIGHT TIMES. Also discussed: the Strange Adventures announcement from DC; the Undiscovered Country announcement from Image; the Hickman announcement panel at Marvel; the panels Graeme moderated; and more. 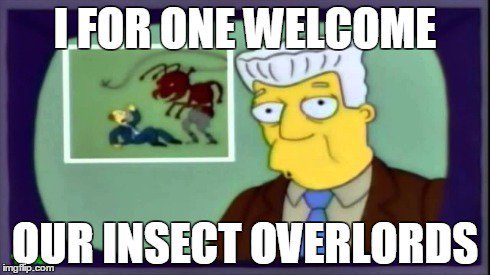 18:33-23:20: I don’t know if I can cleanly split this stuff up, but here’s where we started talking about Marvel Studio’s announcements for their upcoming film slate.  Graeme lists them out, along with the Disney+ TV shows.  And then we whipsaw back to the new X-Men titles announced at the Hickman reveal panel, along with some fun facts revealed there.
23:20-29:00: But here’s what Graeme thinks may have been the biggest story to come out SDCC and it seems like it’s been super-slept on:  Comichub which does point of sales software in the retail market, has announced a partnership with NPD Group, and so sales will be entered into Bookscan.  Retailers who use Comichub POS software will have their sales counted by Bookscan *and* will also have access to Bookscan data.  This could be a huge boon for those retailers and help gain a better understanding of total sales for comics and graphic novels (which, as Hibbs will tell you, is pretty tricky stuff to try and even remotely guess at).  For Jeff, there was the announcement of IDW collecting all of Steve Ditko’s Mr. A, and the disquieting acknowledgment (when someone asked) that Ditko quite specifically did not want the material reprinted.  Discussed: It’s problematic.

BIG NEWS! I’ve been hired* to do the official HBO Watchmen tie-in comic, TALKING WATCHMEN. (“Hired” in the punk rock spirit of no one asking for this) pic.twitter.com/Vqouh1Oa1F

29:00-38:57:  From out of the problematic frying pan and into the problematic fire, we talk about HBO’s Watchmen Comic-Con trailer and Damon Lindelof’s comments at the Television Critics Association about his relationship to Moore’s reaction to the show. (comic by Kenny Keil).
38:57-1:07:49:  Here’s some good news from SDCC.  Doom Patrol the TV show?  It got a Season Two, and pretty much thanks to HBO Max.  I for one welcome our corporate synergistic overlords!  Also discussed:  the Harley Quinn animated show trailer.  Also discussed: The Great British Bake-Off; the secret behind Midsommar; the offsite Batman experience; the transition of SDCC from being a movie-based convention to a TV-based convention; the most popular cosplay of the show, maybe?; Kevin Huizenga’s The River At Night; new work by Adrian Tomine, Lisa Hannawalt, and more; what Graeme spent too much money on; the difference between New York Comic-Con and San Diego Comic Con; and much, much more.
1:07:49-1:28:16:  Graeme has watched all eight episodes of The Boys on Amazon Prime, and he…liked it?! So much so that he went and got the omnibi off Hoopla and is re-reading them?  UNEXPECTED! Discussed: how faithful the adaptation is, who seems to like and who doesn’t on social media, the differences made and their effects; Ennis and his thematic concerns, early Boys with Darick Robertson and later Boys with Russ Braun; the original pitch for The Boys.  (And yet, this is mostly a spoiler-free review?)
1:28:16-1:32:54: As long as we’re talking about shows on Amazon Prime, also on Prime is Under The Silver Lake, the follow-up film from It Follows director David Robert Mitchell starring Andrew Garfield, a comedic L.A. noir that mulls over Mulholland Dr., Hitchcock films, Pynchon novels, conspiracy theories and cultural legacies. Jeff really wants to talk about it and talk about it and talk about it, but you guys all get off lucky.

1:32:54-1:42:24:  However, all of that is probably the perfect prelude to talking about House of X #1 by Jonathan Hickman, Pepe Larraz, and Marte Gracia.  It’s a big batch of comics in one (not cheap but still satisfying!) issue and we muse over its mysteries and finding that comic book sweet spot. 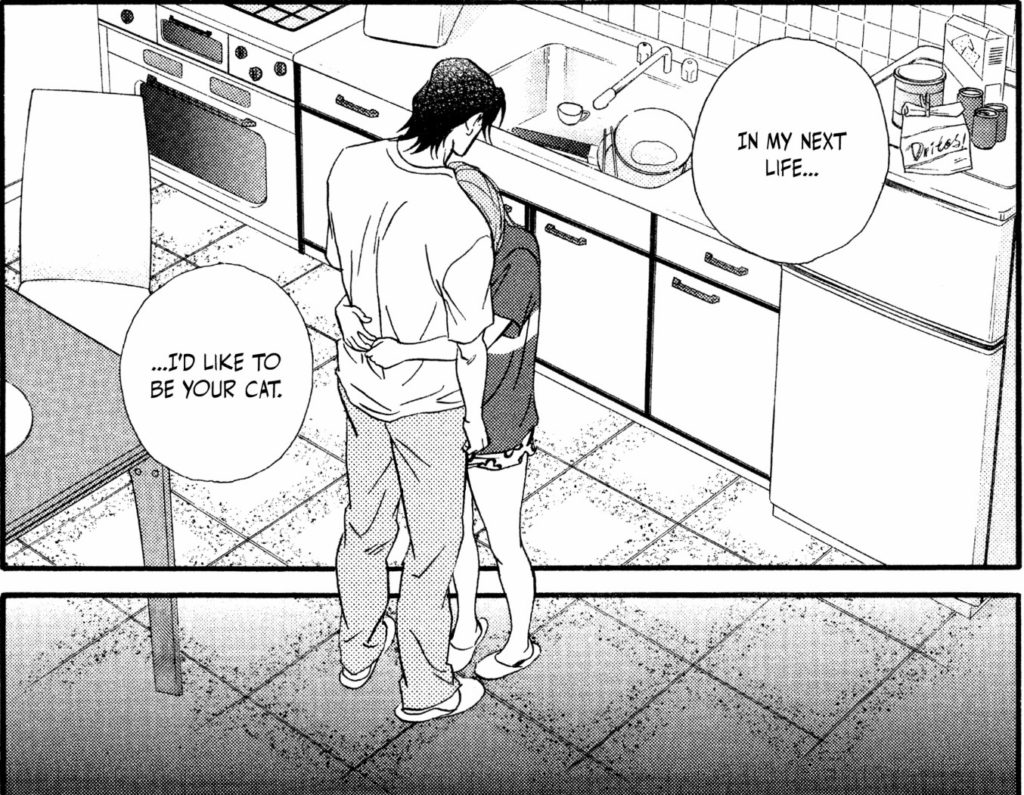 1:42:24-2:00:35:  But Jeff may be fronting a bit on the superhero score.  He loved House of X #1, he read and liked some other superhero books—here’s looking at you, Batman Universe #1—but what was really his jam these last few weeks was fourteen volumes of You’re My Pet by Yayoi Ogawa.  Jeff adores the cartooning, the characterization and the storytelling and it’s all available to those who have a Comixology Unlimited subscription.  Also discussed: the first volume of Mars, more of a Shojo manga (You’re My Pet seems to be much more Josei, for these keeping track at home) similarly available on CU by Fuyumi Soryo.  Also discussed: Jimmy Olsen #1 by Matt Fraction, Steve Lieber, and Nathan Fairbairn; Superman: Up In the Sky #1 by Tom King, Andy Kubert, Sandra Hope, and Brad Anderson; Batman #75 by Tom King, Tony S. Daniel, Mitch Gerads, and Mitch Gerads; and Bad Weekend TPB by Ed Brubaker and Sean & Jacob Phillips.  Also discussed: the end of Walking Dead and reaction about it at SDCC; the resurgence of Todd McFarlane; and more.
2:00:35-2:14:29:  Graeme read the aforementioned Huizenga book; got a lot of print stuff from 2000 A.D.; and he runs Jeff through The Batman Who Laughs miniseries, a mini Graeme thought he was only an issue or two behind on but in fact hadn’t checked it out after issue #1.  It’s…. a very strange little series? 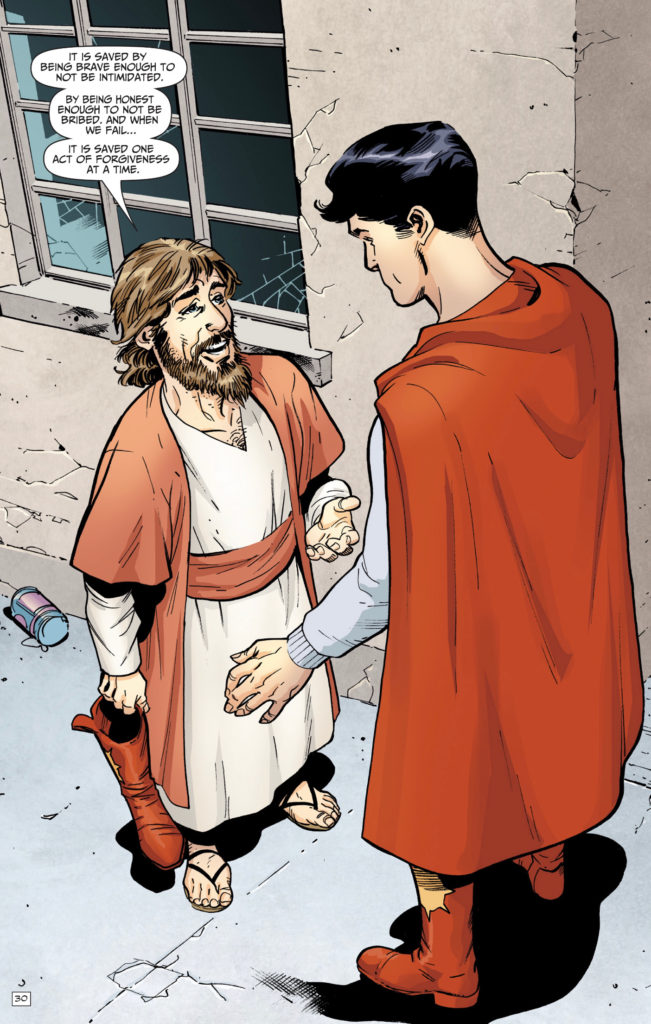 2:14:29-2:20:25: Oh, and Jeff also tried to get his ass in gear and get out of the big two rut, and read The Wrong Earth #1 and #2 by Tom Peyer, Jamal Igle, Juan Castro, and Andy Troy; and Second Coming #1 by Mark Russell, Richard Pace, Leonard Kirk, and Andy Troy, both published by Ahoy Comics.  He liked one and loved the other.  Care to wager which is which, Mr. Bond? (And for bonus points, Mr. Bond, can you tell us how Irredeemable ends? Oh wait, never mind, we’ve both checked Wikipedia by now.)
2:20:25-end:  Closing comments, interspersed with apologies!  Look for us on  Stitcher! Itunes! Instagram! Twitter together and separately: Graeme and Jeff! Matt! Tumblr, and  on Patreon where a wonderful group of people make this all possible, including Empress Audrey, Queen of the Galaxy, to whom we are especially grateful for her continuing support of this podcast.  (Also, don’t forget about Spotify!)
Next week:  Pretty sure it’ll be Episode 276!!