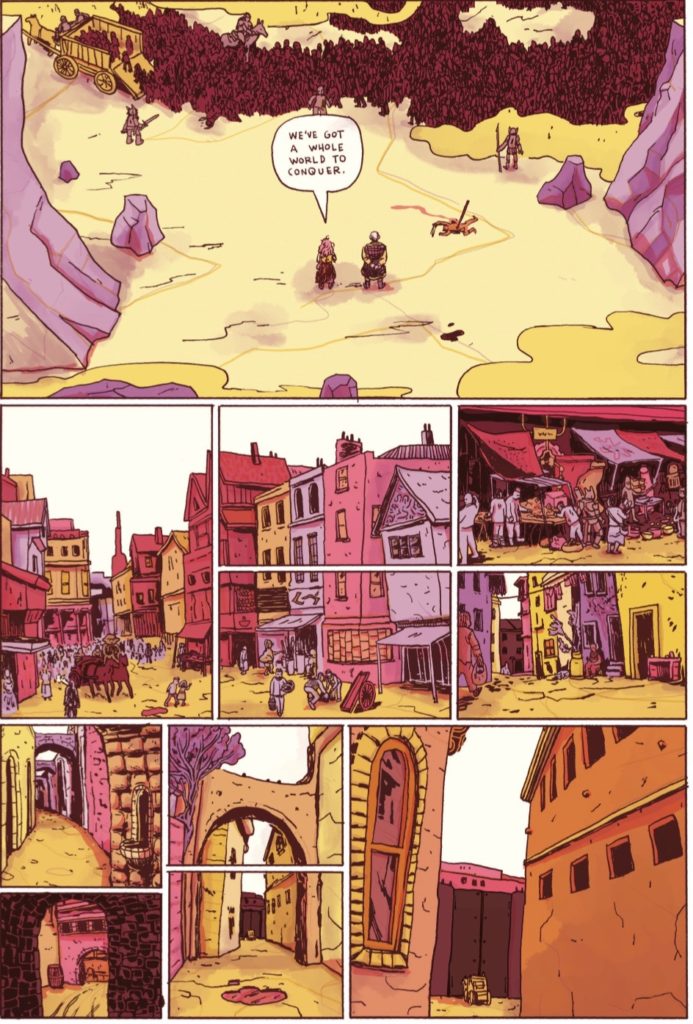 0:01-6:15:  Greetings! After a very long time, Jeff “Black Friday!” Lester and Graeme “Small Business Saturday!” McMillan are back with their non-Fantastic-Four-focused comics podcast that starts off  being *especially* unfocused. Within the first few minutes, we’re debating what constitutes a device, what kind of liquor you’d find in a Molokov Cocktail, and more exciting not-comics-at-all-we-admit-it topics.
6:15-26:09: But “fortunately” we have The Suicide Bomber Sits In The Library, a book by Jack Gantos and Dave McKean to discuss.  Also mentioned:  G. Willow Wilson’s thread on the same on Twitter; the dissolution of Telltale Games; what publishers can and can’t get away with; and more. 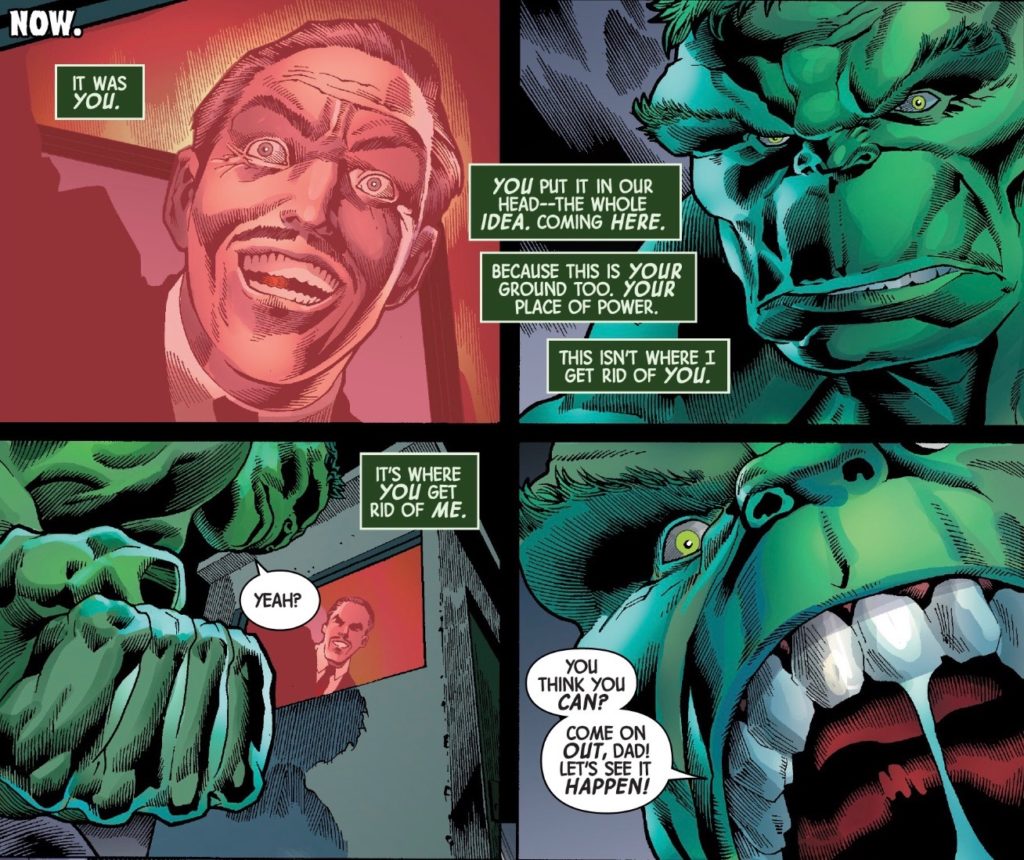 26:09-45:13: Speaking of what publishers can and can’t do, we look a bit at Marvel’s 2018, with an eye toward the strength of the books they’re publishing, which leads us to discuss The Immortal Hulk #9 by Al Ewing, Joe Bennett, Martin Simmonds, Ruy José, and others; Mister Miracle #12 by Tom King and Mitch Gerads;  Heroes in Crisis #3 by Tom King, Lee Weeks, and Clay Mann; and more. 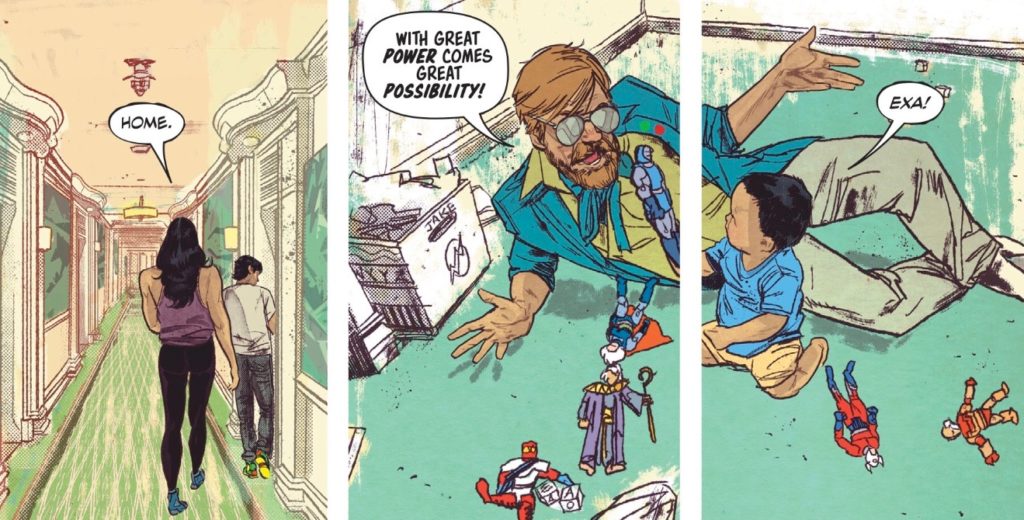 45:13-1:03:07: Graeme mentions he’s seen Bohemian Rhapsody to make a larger point about how your experience of a work can be influenced by its reception but Jeff totally goes crazy with the interrupting because OH MY GOD he just saw Bohemian Rhapsody as well, and how can such a terrible movie be so damn enjoyable?  Of course, we’re going to talk about that!  Also discussed: Huey Lewis and The News; and more.
1:03:07-1:18:00: Comic books!  Quickly discussed:  The Green Lantern #1 by Grant Morrison and Liam Sharp; Avengers #700 by Jason Aaron and Ed McGuinness; Superman #4 and #5 by Brian Bendis and Ivan Reis; and why Jeff gave up on Justice League. 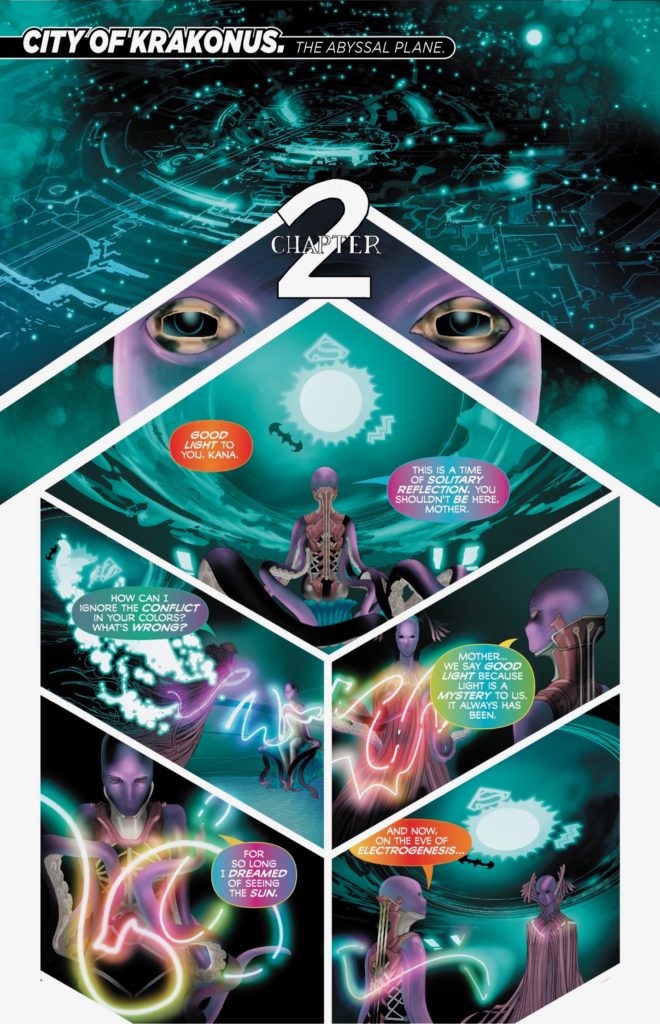 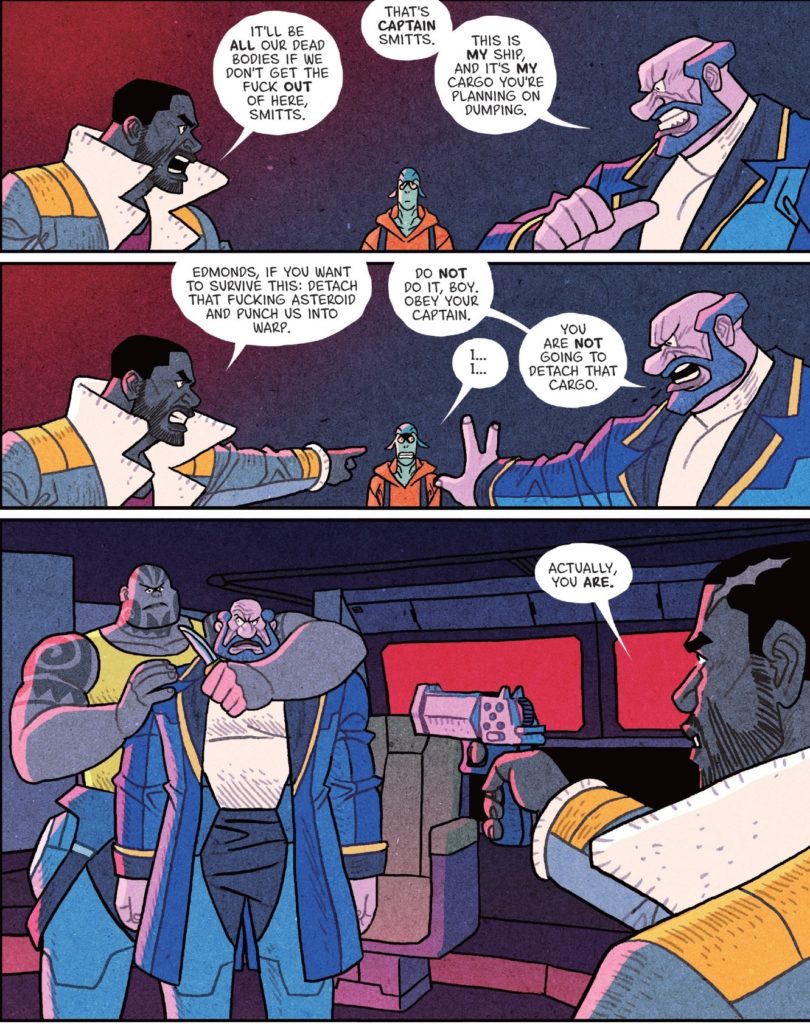 1:45:58-1:52:14: And rather than talk about the last movie he saw that day and have to work hard to slip another comic book review into it, Jeff just decides to openly talk about how much he enjoyed Outer Darkness #1 by John Layman and Afu Chan.
1:52:11=4-2:13:11: And what’s the third movie Jeff saw?  The answer will surprise you! (Maybe? I mean…it’s not impossible, right?) Also discussed: pre-show “entertainment,” movie theaters we go to (or not) and why, a lot of other stuff very un-comic booky…
2:13:11-end:  Closing comments!  Look for us on  Stitcher! Itunes! Instagram! Twitter together and separately: Graeme and Jeff! Matt! Tumblr, and  on Patreon where a wonderful group of people make this all possible, including the kind crew at American Ninth Art Studios and Empress Audrey, Queen of the Galaxy, to whom we are especially grateful for their continuing support of this podcast.  And then we’re out!
NEXT WEEK:  Baxter Building! Read Fantastic Four Annuals #24-27 and join us! 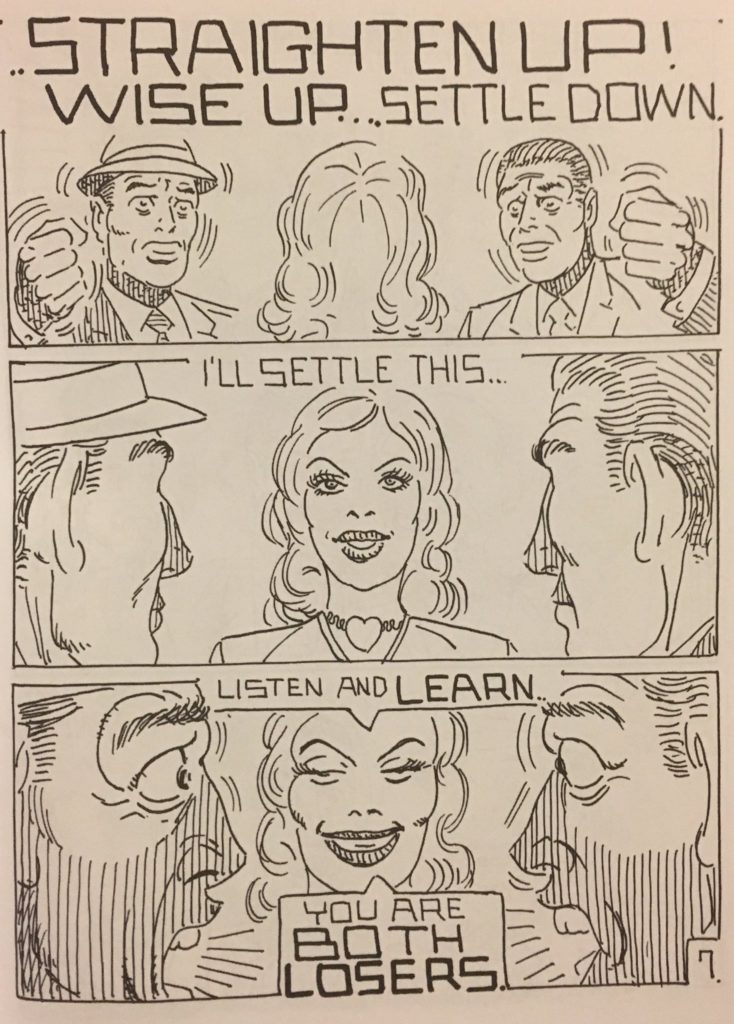 0:01-35:33:  Greetings!  Graeme “Remarkably Warm” McMillan and Jeff “Remarkably Convincing” Lester are here after a weeklong break to rap about comic books, and what better way to start than discussing the passing of Steve “Remarkably Important to American Comics” Ditko.  Graeme has a great handful of fun facts about Ditko you might not have known, and Jeff has some quality bloviation about the strength of Ditko’s plotting….plus a whole lot more! 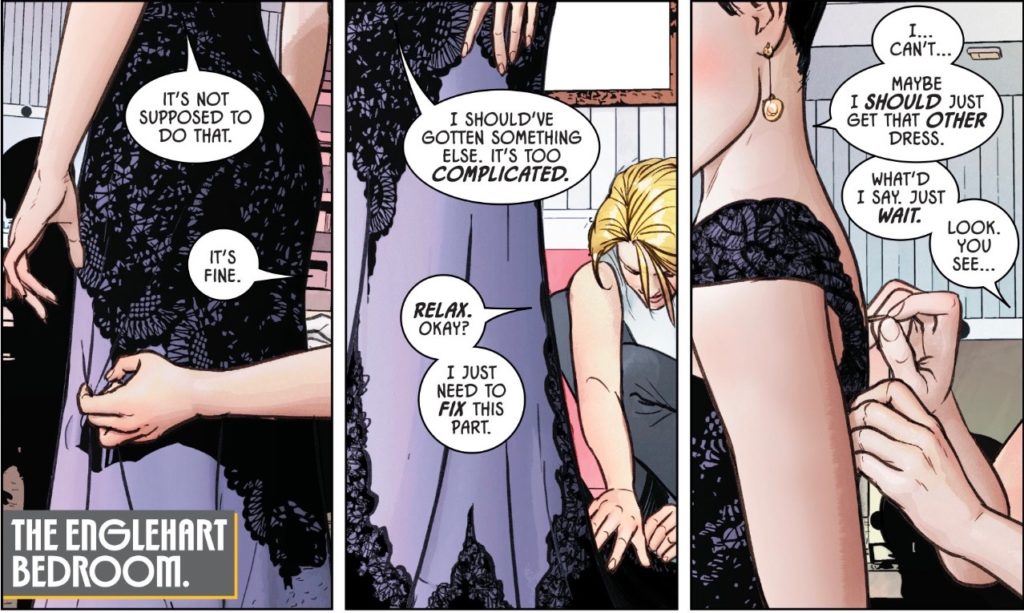 35:33-1:13:54:  Pivoting from comics creators to comics, we discuss Batman #50 by Tom King, Mikel Janin, and a buttload of pinup artists.  It’s halfway through King’s hundred issue run, and the issue is, as Graeme put it, “primed for [Jeff] to dislike.”  True? Well… Once again, we are back in the arena pit of King’s Batman, with Graeme liking it much more than Jeff would honestly think possible, and Jeff disliking it not as much as Graeme seems to think.  Welcome to the Batman #50 Thunderdome! Two Podcasters walk in and….uh, two podcasters walk out.  (But thirty minutes do not!)
1:13:54-1:20:30:  Well, now that it’s been over an hour, maybe we can talk about a second comic? Well, all right, if you insist: Graeme has some choice words for Death of the Inhumans #1 by Donnie Cates and Ariel Olivetti. 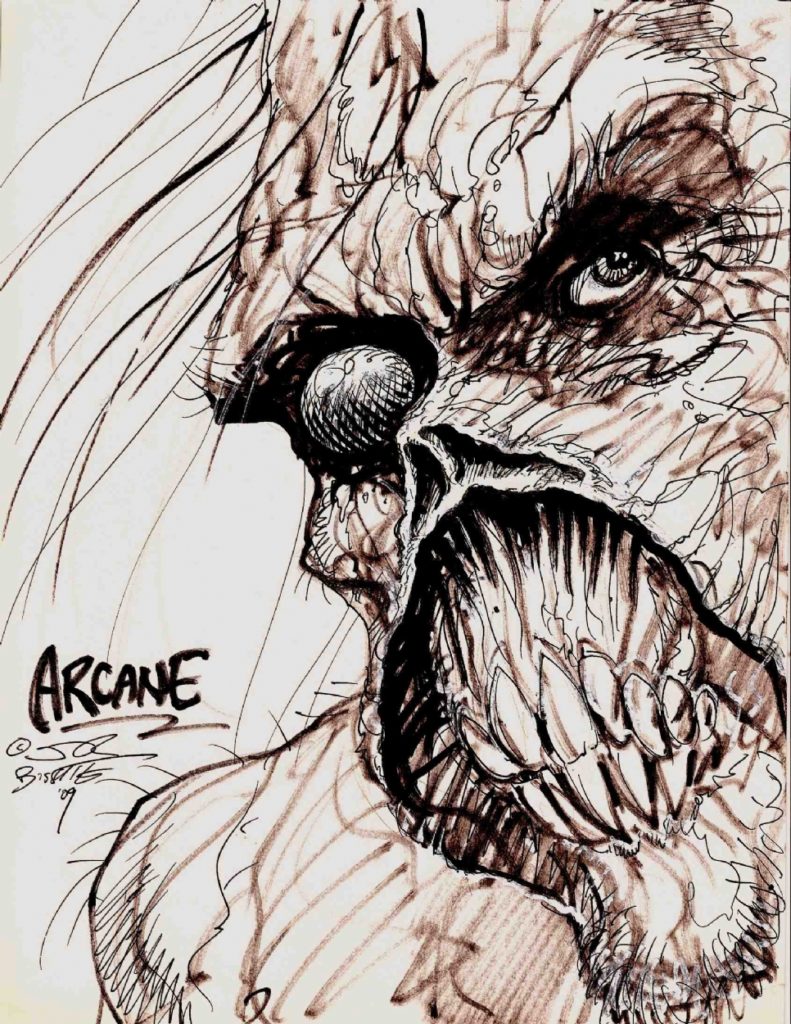 1:20:30-1:29:21: And, picking up the pace, we also discuss Man of Steel #6 by Brian Michael Bendis and Jason Fabok.  So much to talk about in this issue, and yet how much do you want to bet Jeff just uses it as an opportunity to talk about how the bad guy looks like Anton Arcane from Bissette & Totelben’s Swamp Thing run? 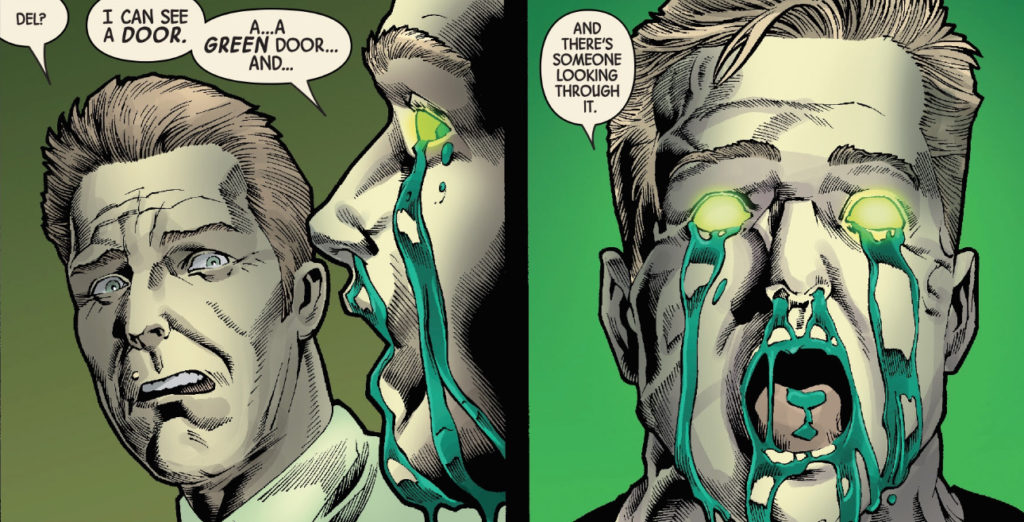 1:29:21-1:32:19: A book that really rang both our chimes?  The Immortal Hulk #2 by Al Ewing and Joe Bennett.  The second issue has a lot going for it, including a vibe that heavily reminded us of classic Michael Fleisher/Jim Aparo Spectre comics—eerie and mean.
1:32:19-1:44:13: Not quite as successful for us on the Marvel front? The first issue of Ta-Nehisi Coates’ run on Captain America, with art by Leinil Francis Yu.  Was it the storytelling choices? Was it the squandering of one of the better writers about the myths of America squeezing himself into the idea of Captain America? Too on the nose? Not on the nose enough? Or was it just the whole post-Secret Empireness of it all? 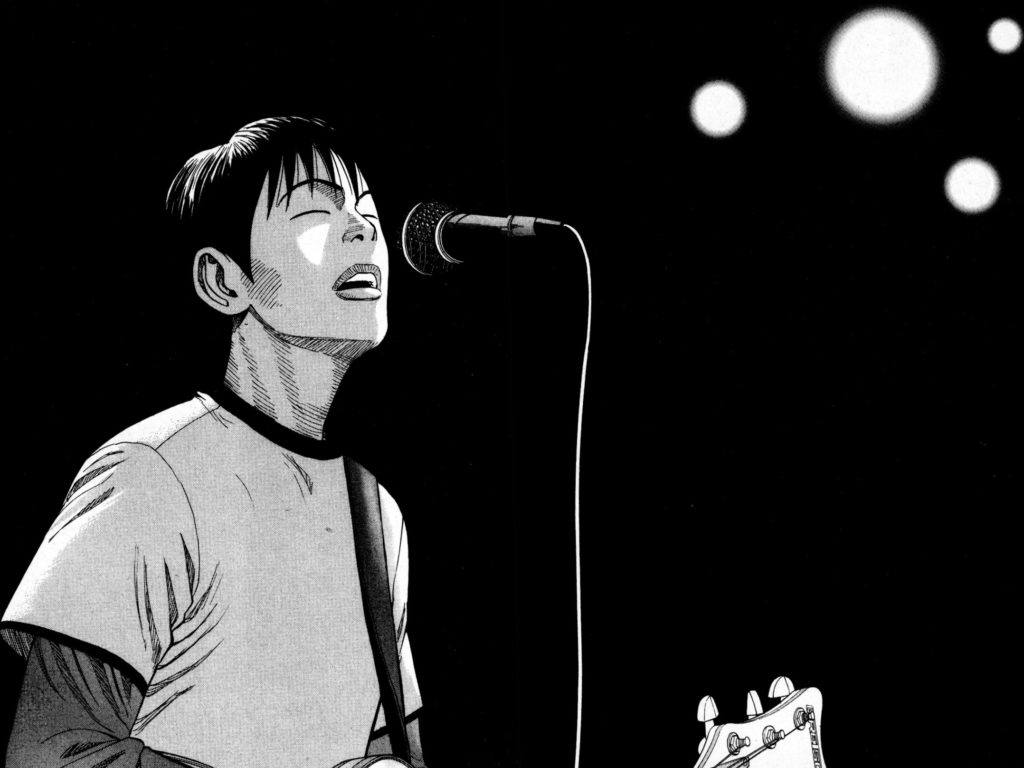 1:44:13-1:55:17:  Hey, but don’t let us get you down—there’s a lot of great comics out there in the world, and thanks to Kodansha and Amazon/Comixology, we have access to the complete translated Beck by Harold Sukuishi, as well as his Seven Shakespeares series.  Beck was one of Jeff’s favorite reads back when Tokyopop reprinted it (under the title Beck: Mongolian Chop Squad, which is how Jeff refers to it here) and is delighted to revisit it again.  If you’re in the U.S. and have Comixology Unlimited or Kindle Unlimited, you’re in for a treat.  (And if not, as Graeme points out, you can try Kindle Unlimited for the first month free! 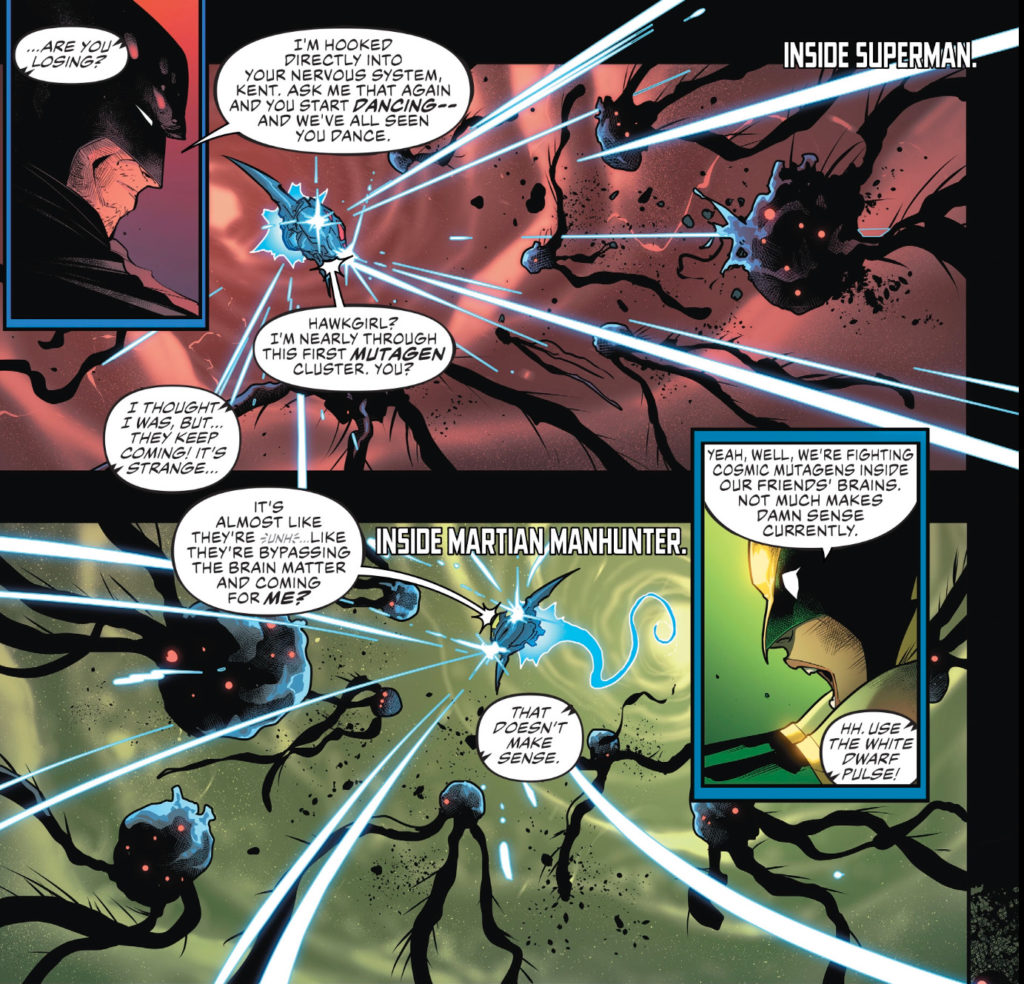 1:55:17- 2:35:01: Jeff is ambivalent about Justice League #3 by Scott Snyder and Jorge Jimenez, but Graeme is not, especially after rereading the first three issues.  After some more Old Man Grumpus comments from Jeff about Snyder’s recent work and his nonplussedness at issue #2 of The Unexpected by Cary Nord, Steve Orlando, and Wade von Grawbadger, Graeme tries to gently broach the topic:  maybe Jeff just doesn’t dig American superhero comics any more?  Includes a lot of talk about the comparison and contrast to manga, and what Jeff sees as manga doing better…and a long discussion of what Jeff wants his comics to be. (Plus: also some sales figure stuff there at the very end?  Because that’s who we roll.)
2:35:01-end:  Closing comments already?!  Sure, but first a very quick review from Graeme of Ant-Man And The Wasp? And then:   Look for us on  Stitcher! Itunes! Twitter together and separately: Graeme and Jeff! Matt! Tumblr,  and  on Patreon where a wonderful group of people make this all possible, including the kind crew at American Ninth Art Studios and Empress Audrey, Queen of the Galaxy, to whom we are especially grateful for their continuing support of this podcast.
NEXT WEEK:  Baxter Building!  Join us for a discussion of Fantastic Four issues #362-370.