One of the fascinating things about binge-reading twelve years of Will Eisner’s The Spirit over the course of the last month or so has been seeing the natural arc of the series; unlike many such… 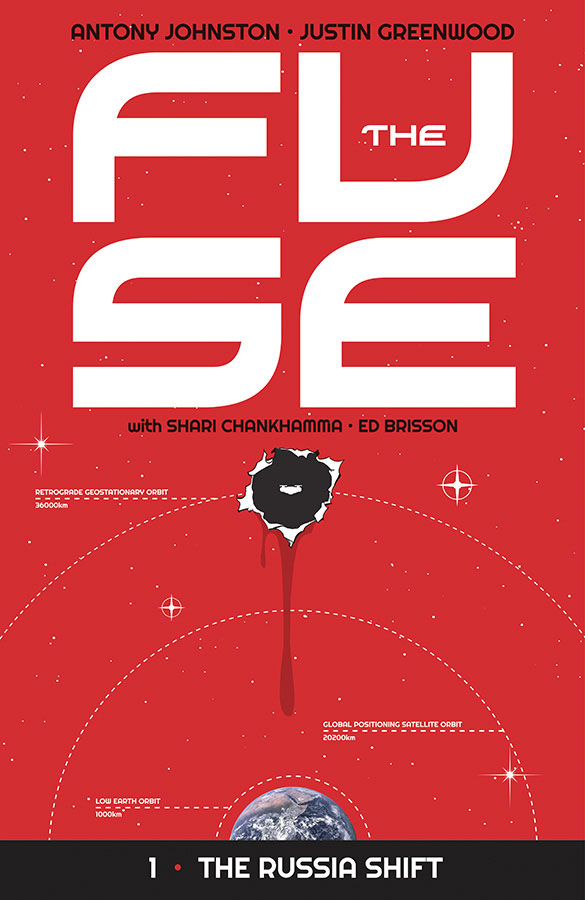 Listen to us: Win them.

Oh, man.  I would not trade my chance for my wife and I to have a sleepover with our niece for anything, but  I look forward to the day when we can do it without me having to replace a few hundred dollars of electronics or visiting the doctor afterward.

All of which is to say:  the podcast is here!  And it is more or less timely, but the show notes are (as ever?) on the speedy side, the kind of thing that might make you snicker once or twice, and help you figure out which part of our show to avoid…but not much more than that.  (Yeah, that brilliant endnoted show note pastiche of Infinite Jest still sounds like a good idea to me, damn it.)

But enough of that.  Here’s this:

00:00-3:08: Greetings! Our greetings include talking about greetings so maybe it’s more appropriate to say: meta-greetings! But we get to the comic book talk PDQ (Bach).
3:08-8:05: See? Here we are with Graeme talking about post-WWII era The Spirit, by Will Freakin’ Eisner! Boom! Not even four minutes in and Graeme’s talking about SOME OF THE GREATEST COMICS EVER MADE.
8:05-9:41: Does Graeme compare The Spirit to Judge Dredd? Why, yes, he does! And does he shame Jeff for being behind on reading 2000 A.D.? Oh my yes, he certainly does that as well, by telling us about the stellar-sounding stuff currently going on in those pages.
9:41-21:20: People who’ve heard Jeff try and talk about “what’s in his future but will be your past by the time you listen to it” know that he would make a pretty terrible Time Lord, and here’s another piece of proof: mentioning his and Graeme’s guest appearance on the only movie podcast in the world, Travis Bickle on the Riviera, which he figured would be up by the time this podcast was completed but, uh, is not at all.
Anyway, what is the mysterious reason Jeff brings it up? Listen in and find out! (Hint: it does *not* involve Heat Vision and Jack…even though we end up talking about that a lot in this segment.) But all of it is basically a swerve to talk about The Spirit some more, so don’t be too fooled. 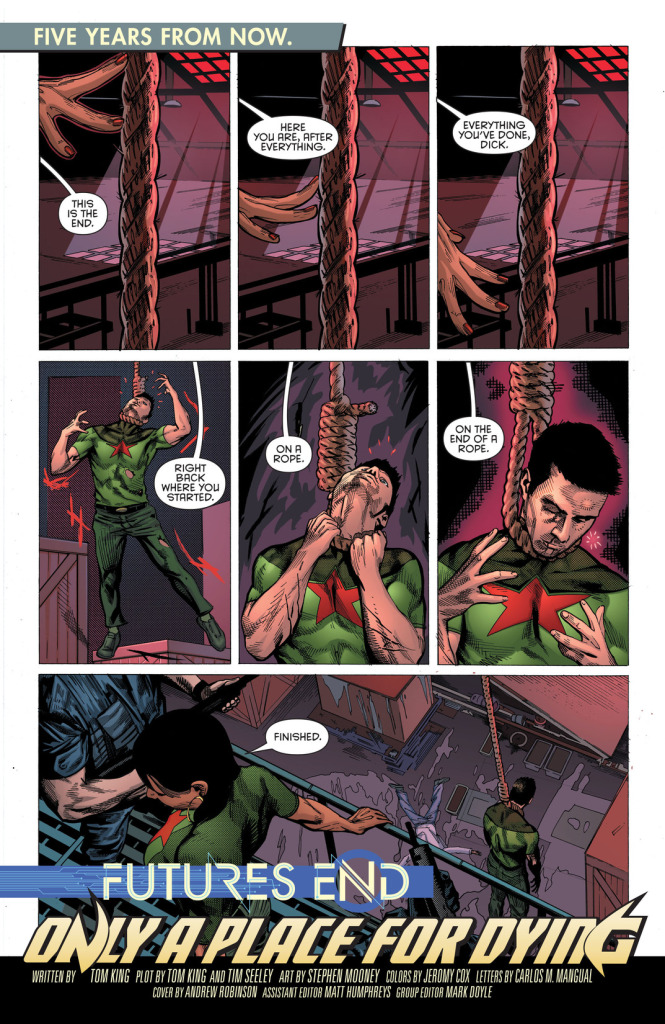 21:20-47:59: Care to hear about some more recent comics: how about Grayson: Future’s End #1? Wow, what an amazing issue cooked up by Tom King, Tim Seeley and Stephen Mooney! Seriously, if you haven’t picked it up yet, it is a really amazing one-shot that you don’t need to know about the Future’s End weekly series in order to enjoy. (In fact, you really don’t even need to have been following the previous two issues of Grayson.) Graeme calls it an “amazingly finely-structured comic,” and he is not wrong, Whatnauts. He is not wrong. Graeme also walks through some of the other 5YL one-shots, like Green Arrow, Green Lantern, Action, Detective Comics—which is a transition for Jeff to gripe about the ongoing stylistic inconsistencies of Batman Eternal (which has a full spoiler alert on for the most recent two issues since Jeff blabs about one of the big villain reveal), for Graeme to talk about Future’s End, and for both to discuss the joys and pains of weekly superhero titles.
47:59-58:45: Speaking of weekly experiences, Batman characters, and DC—Graeme has seen the pilot for Gotham! The whole thing! And he imparts some of his initial impressions here, which gives us a bit of scoop since Graeme will be recapping this show and Agents of SHIELD for Hollywood Reporter this fall. 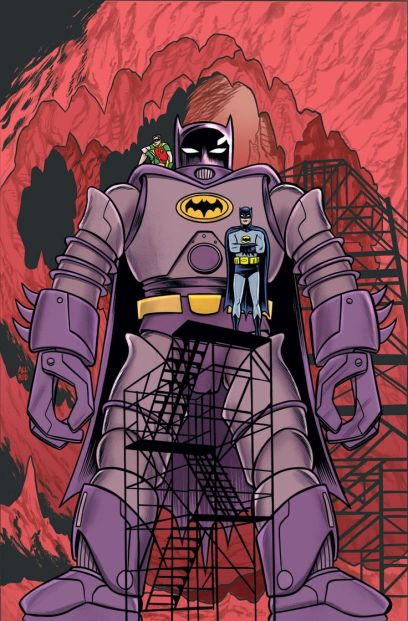 58:45-1:04:10: Back to comics! Jeff read and very much enjoyed Batman ’66  #14, “The Batrobot Takes Flight/Bat-Villains Unite,” by Jeff Parker, Paul Rivoche, and Craig Brousseau. Yeah, if you want a classic Silver Age DC story with a giant Batman robot involved? This is indeed the comic for you. Jeff is also loving the current digital series of Jiro Kuwata Bat-Manga stories. The Human Ball! (And Professor Gorilla!  Which Jeff didn’t mention in the podcast but is telling you here as he’s also fantastic.)
1:04:10-1:12:09: Because Excalibur Comics, Graeme’s local shop, was having a huge sale in celebration of its fortieth anniversary. And because Graeme picked up all the rest of Steve Englehart’s run on Justice League of America and tells us about it. The Secret Origin of the Justice League? The Construct is to Red Tornado as Ultron is to The Vision? Wonder Woman—mind-controlled feminist? All of it proudly proclaims: ENGLEHART
1:12:09-1:38:04: Fun, apologetic, shameless and incisive comics? In that case, it’s well past-time we talked about Transformers vs. G.I. Joe #2 by Tom Scioli and John Barber. Also mentioned as in the same neighborhood, if not more or less under the same roof: Copra by Michel Fiffe; Captain Victory by Casey & Crew; and Nightworld #2 by Adam McGovern and Paolo Leandri; and we talk about Flash Gordon #5 which mixes up the art team for half an issue with surprising results. Also, thanks to Marvel Unlimited, Jeff has read the first issues of Ms. Marvel and Moon Knight which were very good, and the first two issues of She-Hulk by Charles Soule, Javier Pulido and Muntsa Vicente, which is *terrific*. Graeme talks about the second story arc of Ms. Marvel, we discuss the long shadow of the Inhumanity event, and more. Also discussed: Lumberjanes #5 (which Jeff has maybe turned around on); Scooby-Doo Team-Up #6 featuring the Super Friends and the Rainbow Ghosts; and that other fantastic all-ages book, Southern Bastards #4.
1:38:04-1:49:45: Saga #22, read and discussed by both Graeme and Jeff, and the Death-Defying Dr. Mirage, by Jen Van Meter and Roberto De la Torre, which Graeme has read and recommends. For his part, Jeff read and highly recommends Lose #6 by Michael DeForge. And Jeff has just started (still hasn’t finished) Finder: Third World by Carla Speed McNeil (with colors by Jenn Manley Lee and Bill Mudron) which is also pretty damn amazing.
1:49:45-1:59:17: Plug and a contest! PLUG: Graeme is moderating the Judge Dredd panel at Rose City Comic-Con in Portland Oregon, Saturday, September 20th, with guests Douglas Wolk, Arthur Wyatt, and Ulises Farinas. If you are in Portland, Oregon on that day, the Power of Dredd compels you to attend! CONTEST: We really liked “The Russia Shift,” that first arc of The Fuse, the crime procedural by Antony Johnston and Justin Greenwood set on a space station in the near future. We liked it so much that we are giving away a trade paperback collecting that very same arc (see above), and that trade is furthermore signed by aforementioned artist Justin Greenwood. Want to win it? Listen in here to find out how! (Super-thanks to Justin Greenwood, of course, and the ever-awesome Leef Smith of the ever-awesome Mission Comics and Art.
1:59:17-2:04:56: Closing comments! (Part 1) Graeme realizes we haven’t given you any details about our upcoming crossover with Travis Bickle on the Riviera and fills you in on what it was like to record with me and Sean Witzke (the Internet’s most terrifyingly knowledgeable film expert). You should definitely be listening to that podcast if you like movies…but if you like us (and let’s say for the sake of argument that you do) and you like movies, you should definitely give that episode a listen (we will mention it when it goes live, don’t worry!)
2:04:56-end: Also super-worthy of mention—our first $20 patron over at Patreon, Kris Peterson! Check Kris (not Chris) and his buddy Chris (not Kris) as they blog and podcast about comics over at The Gravy Age!  He is a good egg, and we promise to do him proud. (And of course, we are grateful to our patrons who are keeping us fired up and productive!) Places to look for us at—iTunes! Stitcher! Twitter! Tumblr, Patreon! (where, as of this count, 77 patrons make this whole thing possible)  You are…our Super Friends!

Oh, and here it is below, acting a little bit different from previous entries, but…hopefully you can still right-click and download? And stuff?

In case that doesn’t work, I’m going to take supergodmasterforce’s advice and throw in the link to our RSS feed here.  It’s very easy to grab it there, I promise you!

in fact lemme try it this way as a hyperlink (duh!):

As always, we hope you enjoy, and thank you for listening!