As I said on the last podcast, I’m a big fan of Valiant’s output, and have been since they relaunched a couple years back. Apparently, though, I’m not a fan to be up to date with their books, which is how I ended up with the entire Armor Hunters crossover to catch-up on this weekend. After three smaller, quasi-crossovers (Harbinger Wars, Unity and Mission: Improbable), did Valiant manage to get a crossover right?

Armor Hunters #1-4 & Armor Hunters: Aftermath: The basic plot of the Armor Hunters crossover is, in fact, very basic, amounting to little more than “That alien armor Aric is wearing over in X-O Manowar? Other aliens are prepared to destroy the Earth to ensure that he stops wearing it. Our guys have to stop them.” The surprising thing about the series isn’t that there’s a last-minute twist, but that such a simple plot holds up surprisingly well across the four issues of the main series. 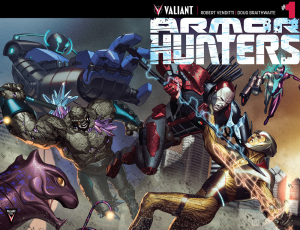 Nothing in the book is especially groundbreaking, with many elements feeling familiar to anyone who’s read enough superhero crossovers up to this point. “Hey, remember when Vandal Savage destroyed Montevideo in DC One Million? The Armor Hunters have destroyed Mexico City!” and so on. Yet, it entirely works; the story moves along briskly, with enough subtle drop-outs to set up crossovers for the other series. There’s enough action to satisfy the fans who come for this kind of thing, but also enough moving pieces to prevent it from becoming just a series of fight scenes over and over again for four issues.

For me, I would’ve said that there was maybe not enough of a grounding in the Valiant universe for new readers, but Al Kennedy from the late, lamented House to Astonish podcast told me that he tried it as a newcomer and it made him want to try out other Valiant titles, so what do I know? Well, this — as well-written as the series is for the most part, the Armor Hunters of the title aren’t really that interesting, or developed enough. They have vague motivations that get sketched in elsewhere for the most part, but I do kind of wish more had been done with them. (Of course, considering two of them — interestingly, the only two female characters of the team — survived to fight again, perhaps we’ll get to see more done with them after all.)

For the most part, though: As the spine of a crossover event, Armor Hunters boasts pretty tight script by Robert Venditti and Doug Braithwaite being Doug Braithwaite (which is to say, he’s not really to my taste, but he does what he does well). Overall, a success, then.

X-O Manowar #26-29: Also written by Venditti, this book follows the format seen in recent DC and Marvel events where the “core” series the event stems from becomes, essentially, “the untold backstory” for the duration, filling in events that explain things seen in the main title but not properly explored. In these four issues, it’s Venditti (and artist Diego Bernard, offering up uneven if not ugly work for the most part) telling the story of Primary Reebo — leader of the Armor Hunters — and how he got to be where he is by the story of the main series.

Well, that’s not entirely true; that’s what it is for three of those issues. In the fourth, there’s a swerve and it follows Malgam, the prey of the Armor Hunters (and a former Armor Hunter himself) in the aftermath of the main series. It’s an odd move, which in one sense pays off some of the earlier story but nonetheless feels like you’ve missed an issue in between. Across all four issues, there’s a sense of — not being unnecessary, exactly, but being inessential to the overall story. It’s nice to know where Reebo came from, but he was already one of the more developed villains in the core title. Despite Armor Hunters being very clearly an X-O Manowar-centric event, the actual issues of the series feel enjoyable but somewhat disposable, in the end.

Unity #8-11: That said, the Unity issues feel even more disposable. They’re written by Matt Kindt, who also wrote the massively missed opportunity that were the Forever Evil-tie-in issues of Justice League of America, which makes me wonder if there’s something about crossovers that psychs him out for some reason (Art is by Stephen Segovia, who brings a Lenil Yu-esque look to proceedings, if lacking some of Yu’s particular foibles).

Like the JLA issues, there’s very much a sense that Kindt is aware that he’s playing with characters who are needed elsewhere at certain points in the story. As a result, he uses them so cautiously that it almost saps all tension from the story. There’s no true sense of danger, nor momentum, in these comics — instead, you feel like everything is just filler between the “more important” other issues, which is the very worst feeling you can have from a comic.

Interestingly enough, the end of the Armor Hunters: Aftermath issue seems to point at a new status quo for the Unity book, just a year after its launch. If it’s something that can provide stability, purpose and definition for a title that’s been surprisingly wobbly since the end of its first arc, that can only been a good thing. 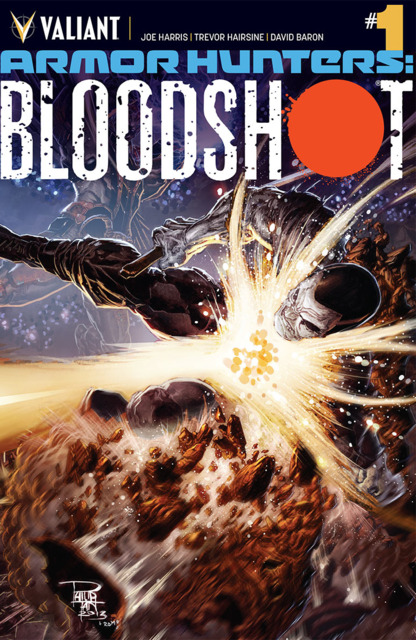 Armor Hunters: Bloodshot #1-3: In many ways, the Bloodshot mini does everything I wanted from the Unity issues — it tells a story within a story, something that feels complete (or, really, complete enough) yet slots easily within the larger event. That’s particularly impressive considering that there’s a bunch of heavy lifting writer Joe Harris has to do in here, regarding the status quo of Bloodshot following the end of his last series and setting up what’s to follow. Yet it looks, if not effortless, than at least seamless — the flashbacks feeling relatively organic even if the main plot feels very out-of-sorts with what could be expected from a Bloodshot story.

I mean that last part in a good way: I’m always surprised that more comic book crossovers don’t play with that idea more often. We don’t get “Bloodshot versus aliens” stories often, so why not play up the ways in which it feels incongruous? That’s part of the joy of this series — that what’s happening is so unusual for the character, and his response is essentially “I’m going to shoot everything a lot and hope for the best.” The fact that so many crossovers are based around big events that are supposed to feel unusual and momentous should be played up like this more often, I feel. More crossover issues should have a feeling of what the hell is going on?

Artwise, Trevor Hairsine provides very Trevor Hairsine-y work, which works better here than on many books I’ve seen him on. There’s something simultaneously sharp and grimy about his work that often rubs me the wrong way, but on a series about a nanite-filled killing machine taking on alien invaders, that’s entirely fitting. What might seem ugly or inhuman about his characters elsewhere feels right. All told, it’s a pretty great little series.

Armor Hunters: Harbinger #1-3: Meanwhile, Joshua Dysart turns the three-part Harbinger mini into something that’s as much a second Harbinger book as it is part of the crossover. With the team split up as the result of events in the main title’s “Death of a Renegade” storyline, this series follows half of the remaining team while the simultaneous Harbinger: Omega series follows the other half, and for anyone who enjoys the regular Harbinger series, it’s everything they could want.

It’s maybe the series that works the best out of all the Armor Hunters books — separate enough from the event to stand alone if you want it to (None of the characters appear in the main title, the only crossover in which that’s the case), and also a story that works entirely outside of the main series from beginning to end as long as you grant it the “Something has happened in Mexico” gimme at the start. Everything you need is in these three issues, including introductions to the main characters in this series and also a complete story arc that advances characters and larger developments from the Harbinger series proper without feeling like an excerpt of something larger.

Harbinger has, for awhile, for me, seemed like the book that Marvel’s Ultimate X-Men should have been — something that takes the trope of “gifted children” and successfully updates it into a series that feels genuinely contemporary and, as a result, uncertain and unwilling to settle into set patterns. Across the two-and-a-bit year run to date, it’s been something that plays with ideas and status quos, flirting with expectations before flipping them over and moving on to something else.

This mini continues that: it’s arguably a play on the idea of the superhero as emergency response, but something that explores that concept from a couple of directions and avoids either endorsing or refuting the idea in its entirety. I enjoyed it so much that I went back and re-read the entire Harbinger run as a result, and finished it wanting more. More than anything else, Harbinger might be the Valiant book that makes me feel as if the publisher is doing superheroes “right” while others have trouble doing the same. Armor Hunters: Harbinger is a good example of why this is true.

All in all, then, the Armor Hunters event worked pretty well, despite a couple of weak spots and Unity’s continued shakiness. It’s not the greatest crossover event superhero comics has ever seen — that’s still Millennium or DC One Million, for my money — but it is something that doesn’t outstay its welcome, offers a reasonable introductory point for all series involved with the potential exception of Unity, and is pretty fun to boot. When it comes down to it, that feels like a win in my book.

3 comments on “The Hunt Begins (and Ends): Graeme on Valiant’s Armor Hunters Crossover”