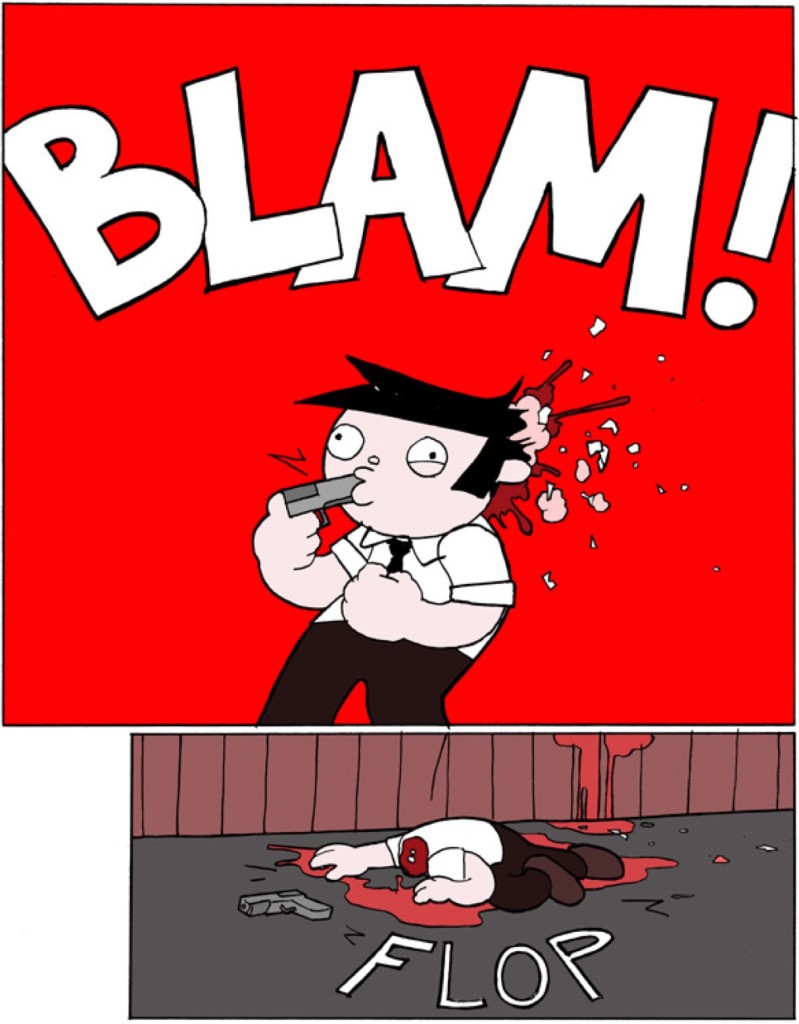 Sometimes a comic can be challenging to write about.  If we were talking to you in person, standing by the comic book store counter and shooting the breeze, recommending Jason Shiga’s Demon would be easy:  for one thing, I could convey my enthusiasm by waving my arms around and yelling a lot and you wouldn’t need me to actually reveal a lot of plot details.  Or, depending on your reaction to my enthusiasm, I could figure out how much plot to reveal to actually hook you on the book.

Revelation is, for me, the strongest appeal to Jason Shiga’s Demon, and the idea of sacrificing any of its numerous surprises in order to get you to try the book isn’t something I take lightly.  (And so this browser window sat open for days as I fretted about how to write this.)

Shiga’s Demon, which you can read in its entirety as he updates, a page at a time, over at  his website, is the most insane and satisfying exploration of a premise since Ohba and Obata’s Death Note.  Because Graeme and I support Jason on Patreon (and so do you, if you support us, thanks to our 10% pay it forward program), I had access to the first twelve issues on PDF.  They’ve been one of the most satisfying exciting reads of the last year.

Let’s see if I can convince you at the most basic level of high concept, something you could glean from the very first issue:  Demon is about a man seemingly incapable of dying.  On the very first page of the very first issue, Jimmy Yee writes a suicide note and hangs himself.  By page 5, he is alive again, back in the bed of the Oakland motel he’s checked into.  The rest of the 35 page issue is Jimmy killing himself over and over, waking up in the same room, trying to figure out what is happening to him. 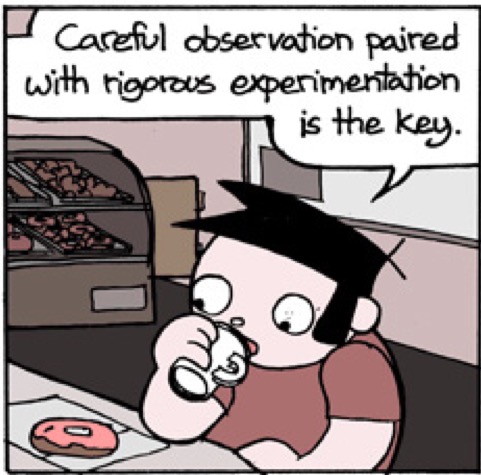 Let me be honest here (and know too that the necessity for this disclosure probably kept this browser window open and empty a few days longer than otherwise):  I read the first issue of Demon probably close to a year ago, and it took me close to a year to get around to issue #2.

There are a couple of reasons for this.  For one, the “guy who can’t die and keeps waking up over and over in the same place” thing felt a little shopworn to me, the stuff of low-budget movies and writers of indie comics shooting for a book at DC (or, worse, the first Image comic from a writer for DC). I worry that if you picked up this first issue on my recommendation (or read the first 36 pages on the website), you would turn to me and go, “Pffft!  Jeff, I served with Death Note. I knew Death Note. Death Note was a friend of mine. Senator, you’re no Death Note.”

And I would take your point!  Death Note opens with Ryuk, a demon from an evil dimension deciding to cause mischief by putting on Earth a book where anyone whose name is written in it will die by the method indicated. By page eight, it’s fallen into a teenager’s hands. By page nine, he’s reading the book and learning its rules. By page 14, he’s being confronted by the demon. By then, we are very far from low budget indie movie territory.  (Although I was still severely under-read in manga when I picked up Death Note, I suspect for the experienced reader, it also didn’t come off like typical Shonen Jump fare: both Ryuk and the teenager Light subvert the traditional “cool but also kinda cute” Jump designs.)  By contrast, the first 80+ pages of Demon (or the first three issues) are setting up and teasing the puzzle of Jimmy’s special powers. But I am thoroughly convinced getting through that set-up (which is perfectly fine, mind you, just not especially gripping) is well worth it: starting from issue #4, Demon kicks into high gear and becomes what a marketing person might call “a high-octane page turner.”

But here’s another concession: Jason Shiga is no Takeshi Obata.  Obata is, in his very fastiduous way, a sensualist, exquisite at drawing hair and clothes.  Even when his faces threaten to look all the same, you can tell that sameness stems from fixation.  By contrast, Shiga’s characters look like cut-rate muppets.

The closer your tastes fall on the “realistic comic art” spectrum, the hardest it can be to embrace to Shiga’s art: he’s a cartoonist, and not an especially elegant one when it comes to his characters.  (Although if you look at that first issue, you’ll see he sweats the small stuff:  Jimmy himself may look like he’s escaped from a low budget kid’s show, but each of Jimmy’s tools of destruction are precisely delineated, and that hotel room he’s in is dead-on, right down to the window AC unit sticking out past the edge of the cheap, heavy curtains.)

Would you have been willing to watch Inception if it had been animated by the South Park guys?  For a lot of people, that’s a pretty steep stylistic buy-in, but it’s the price of admission for this ride. 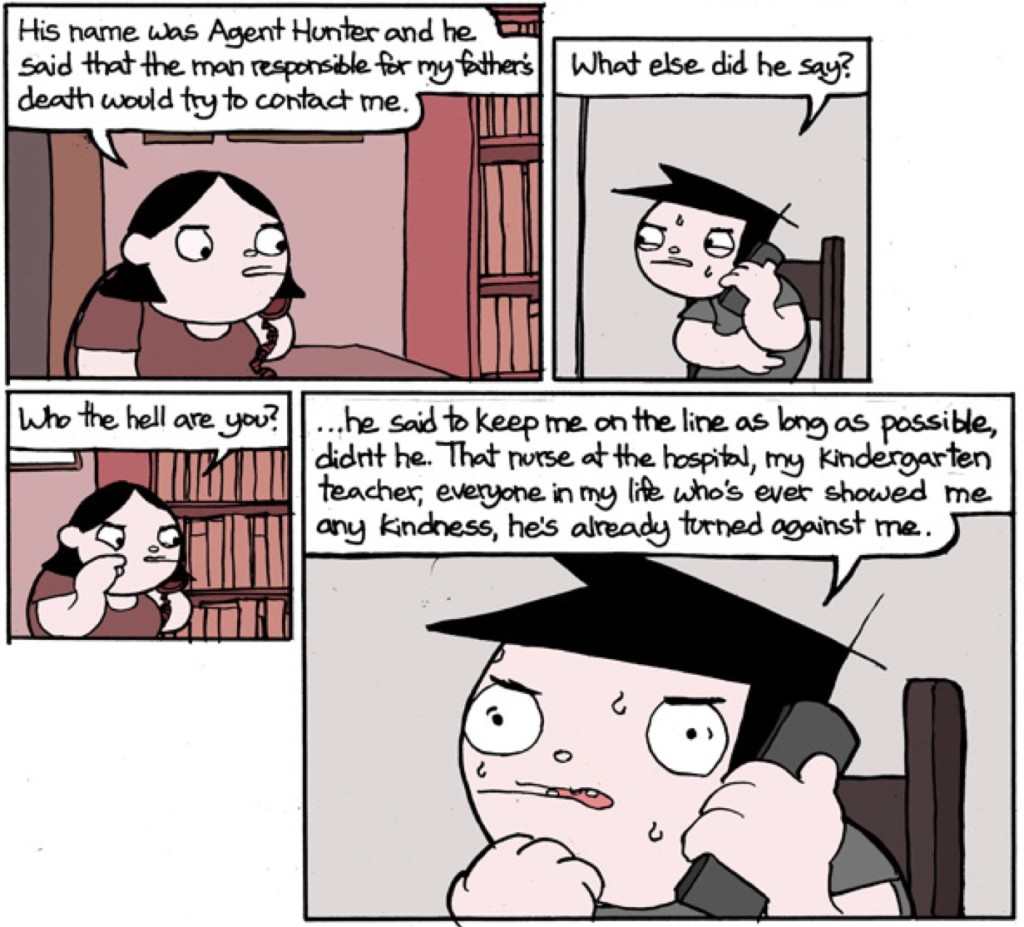 But as with one of Shiga’s previous works, Bookhunter, there are also satisfyingly BIG action setpieces.  A hostage exchange on a train, for example, is paced perfectly, with a pervasive sense of suspense and escalating stakes that culminate in a deeply satisfying payoff. His characters may look like puppets but Shiga could teach a master class to writers and artists at the Big Two on how to use the “no-budget” approach to comics to build to bigger and bigger sequences until you feel like you’re reading the biggest, craziest summer movie ever. It’d be so much easier to sell this book to more traditional readers if the art matched the action.

[I had a few screenshots of said action but realized I thought they were too spoilery.  Sorry.]

I concede my desire for a more broadly appealing style (so Shiga can be justly buried in riches) in a way misses some of the point.  Jimmy, the man with special talents, comes to the attention of Agent Hunter, member of a shadowy government agency, the OSS.  Their eagerness to recruit Jimmy (who responds to such an offer with “Suck my private-sector balls, motherfucker”) moves well past the point of coercion, and issues #4-12 are essentially one long brutally obstinate battle of wits which Shiga plays out well beyond what you might expect.

Similar to the way Tsugumi Ohba considered considerations of good and evil in Death Note as beside the point, Demon is cheerfully sociopathic in how it plays out its premise to logical ends.  In that way, the first twelve issues of Demon are a Laurel & Hardy movie with the rigorous logic of  hard sci-fi.  And while that rigorousness infuses the violent hijinks with a deeply satisfyingly wit, the brutally casual take on said hijinks is also deeply hilarious.

Reaching the end of the most current issue, (#12) (where Shiga once again breaks the narrative sound barrier) and realizing the guy is only halfway through his story, gave me that “kid waking up on Christmas morning” feeling a reader has with a great book, a feeling of unending good fortune and anticipatory pleasure.

It’s a pretty good point to invite you to jump on the ride, and Shiga has staggered things so there are many possible ways to get on board:  as mentioned above, you can read the material for free online (though the books are slowly starting to creep ahead) but I’m a very big fan of supporting Jason on Patreon. For $1.99, you can get a digital subscription which gives you access to all back issues and a new issue for every month—this proved the perfect solution for me and my tablet—or have the PDFs plus a continuing subscription to the hard copies (signed!) for $4.99 a month.  Both plans are great because although Jason has an admirably high number of patrons and a decent amount of cash, it would be wonderful for him to have even more.

Whatever you decide, come with an open mind and give it a  generous try.  At its best, Demon does what good comics are supposed to do… 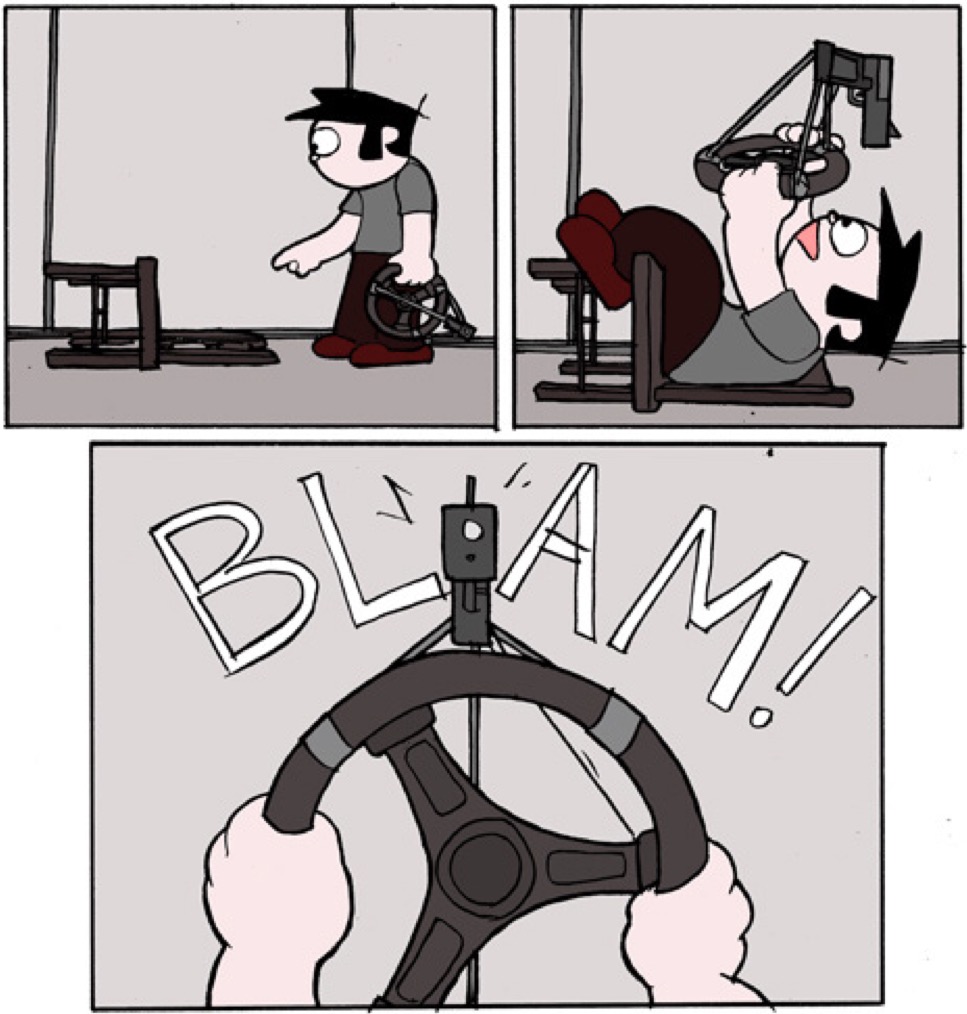