[Warning: this is a review of the latest Bourne movie which just came out this weekend, but I don’t think I spoil anything? But, just in case I do and have somehow forgotten…spoilers?]

I caught Jason Bourne on opening day, which is the kind of thing I don’t do anymore.  Although I want to chalk it up as putting the bow on a weeklong vacation, I’d be lying by omission if I didn’t mention the missus and I have a fondness for the Bourne franchise, even going so far as to see the Bourne Legacy with Jeremy Renner on the big screen when it came out. 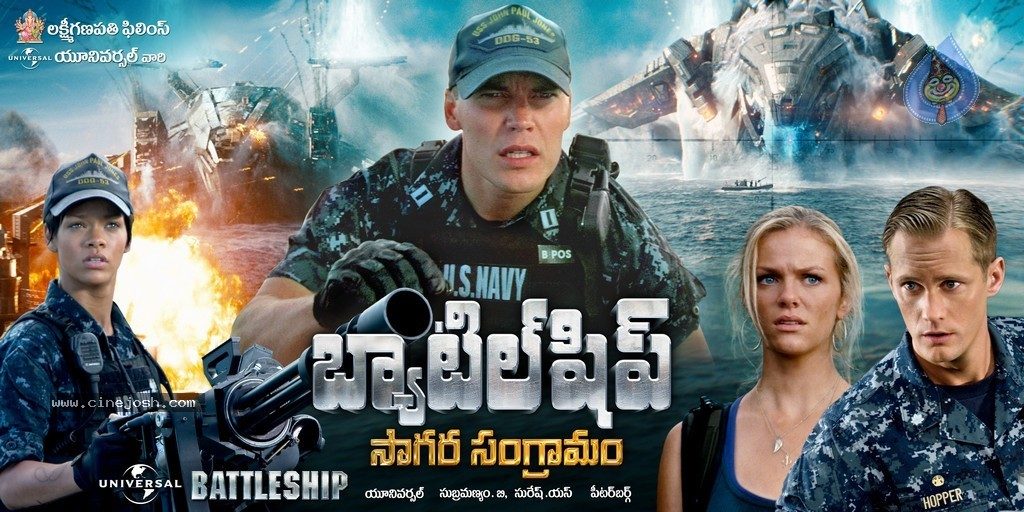 (Okay, it was a drive-in double feature with Battleship but it still counts.)

(And when I reminded my wife today we’d seen it, she looked completely dumbfounded: “No, we didn’t!” Yes. Yes, we really did.”  “No!” “Yes! Remember, Jeremy Renner punched some wolves?” “Hmm.  Was that Rachel Weisz woman in it?” “Uh, maybe?” So yeah, between us, we were able to remember maybe six and a half minutes of the Bourne Legacy, BUT IT STILL COUNTS.)

In a way, my expectations were too high for Jason Bourne: sure, Matt Damon and writer/director Paul Greenglass were back, but they’d left Bourne to do the remarkably tepid Green Zone together (also seen by my wife and I in the theater—looking back, it’s clear her crush on Matt Damon and my crush on Paul Greenglass’s action editing had cast a siren spell over us). 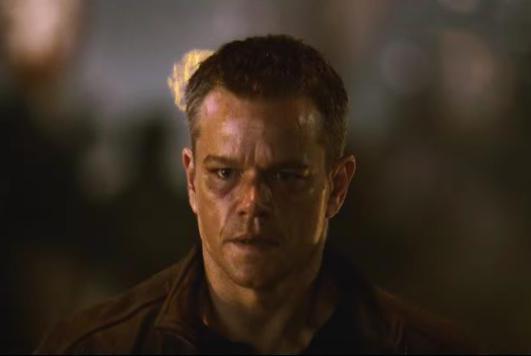 How could my expectations be too high?  What do I really want from a Bourne movie? I want a streamlined little thriller that waves at current events in between car chases and scenes of two men beating each other up with improvised weapons.  This is indeed what Jason Bourne gives us, although the final car chase feels more like a tribute to The Blue Brothers, and the improvised weapon bit is saved for the last, a  final fight between Bourne and bad guy Vincent Cassel that lets the two men go at it in a sewer tunnel below Vegas, banging one another about with discarded utensils like the most beautifully shot installment of Jackass.  But there’s a reason why reviewers have likened  Damon and Greenglass’s return to the Bourne franchise to watching your favorite rock band re-form to go on tour, and that reason is the nagging sense you are watching a very accomplished show by talented dudes who are only in it for the money. 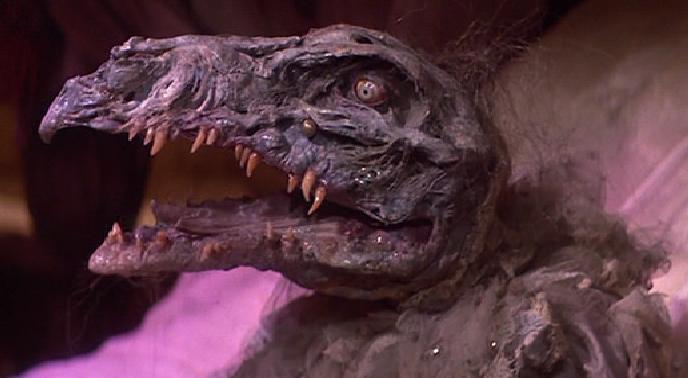 Somehow, every bit of the movie that feels like it should be a badge of the team’s sincerity really indicates the opposite: there’s a lot of talk made about surveillance and privacy in a post-Snowden world, and the screenplay works hard to give Bourne some personal conflict, as a tormented, exhausted Bourne is dragged into action to discover the truth behind his father’s death.  But both these elements go almost nowhere and lack conviction. Tommy Lee Jones, who’s finally completed his transition into a Skeksis from The Dark Crystal, unites both threads by being the CIA director behind the latter and the force pushing the former, as he bullies, wheedles, and cajoles a Zuckerbergesque social media mogul into building a backdoor into his crazily popular social network, Deep Dream. 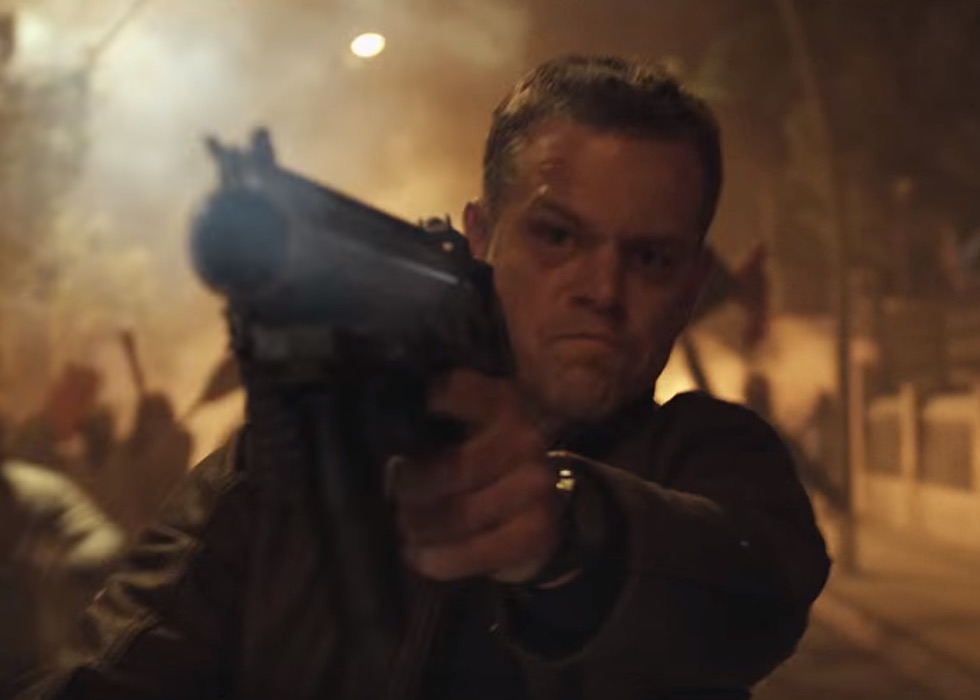 But even before the social network that sounds like a Ben & Jerry ice cream flavor comes up, there’s a big action setpiece in Athens that, even as it technically dazzles, underlines how far off the mark Damon and Greenglass are from their ambitions.  As Bourne dashes about a full-scale riot doing his best to escape with series regular (and human plank) Julia Stiles, there’s a nagging feeling all of Bourne’s actions have nothing to do with the world at large, a gap between our hero’s eternal delving into the mysteries of his own past and Greece breaking under the weight of corruption and anti-austerity pressures.

The feeling was so persistent I assumed it was intentional, and that the film was signaling us as to the need to reinvent Damon’s character so he could reengage with the world again.

But…nope.  Like some tendon-snapping incarnation of The Great Gatsby, Damon’s character beats ass, boat against the current, Bourne borne back ceaselessly into his past to learn and rectify the secrets of his origins, the scenes of him crashing a commandeered Ford Mustang through the glowing streets of ahistoric Las Vegas so personifying the character’s  high-octane solipsism that Jean Baudrillard must have been  high-fiving himself in Heaven.

And yet that’s the thing for me about the Bourne movies.  I enjoy how well they’re made—I haven’t even mentioned how good the acting is in this thing, with Damon and Alicia Vikander and Riz Ahmed giving more in every scene the fewer lines they have—and I enjoy thinking about them afterward,  turning them over and over in my head, pondering how problematic they are.  Years ago, I wrote a review of The Bourne Supremacy and without realizing it lifted some very excellent paragraphs from Don DeLillo’s Libra.  Greenglass and Damon have shown audacity—at least as Hollywood would define it—by being willing to walk away from their big franchise to do something different, but I wish they’d had the audacity to adapt DeLillo’s fictionalized biography of Lee Harvey Oswald for the big screen, in part because Bourne is to Oswald what Dracula is to Vlad The Impaler: the transmutation of a man into a daydream, the bending of a bit of genuine nightmare into a pleasurable ghost story.  Like every Bourne movie to date—but maybe this time even more so—we are made complicit in the glamorizing of the man in the crowd with violence in his mind, of the sniper on the rooftop with a mission to accomplish.

As with most of the rest of the series, women are there to be killed, people of color are hyper-competent but tools of corruption, and old white men are venal manipulators willing to sacrifice anyone to preserve their secrets.  In such a world, the rootlessness of Jason Bourne the man is matched only by the brutality of his competence.

And maybe that’s why Jason Bourne the film is so enjoyably put together but so barely entertaining, so infectious in its joylessness: in the nine years since the last Damon/Greenglass joint, MRA shitbags have really become a thing now, and it can be harder to root for the dispossessed white guy violently redressing the wrongs done to him by others.  Jason Bourne is a guilty pleasure, but one whose filmmakers don’t seem to realize what exactly it’s guilty of. I wish it had been a more fun way to feel bad at the movies.

One comment on “Bourne to be Alive: Jeff Catches Jason Bourne”