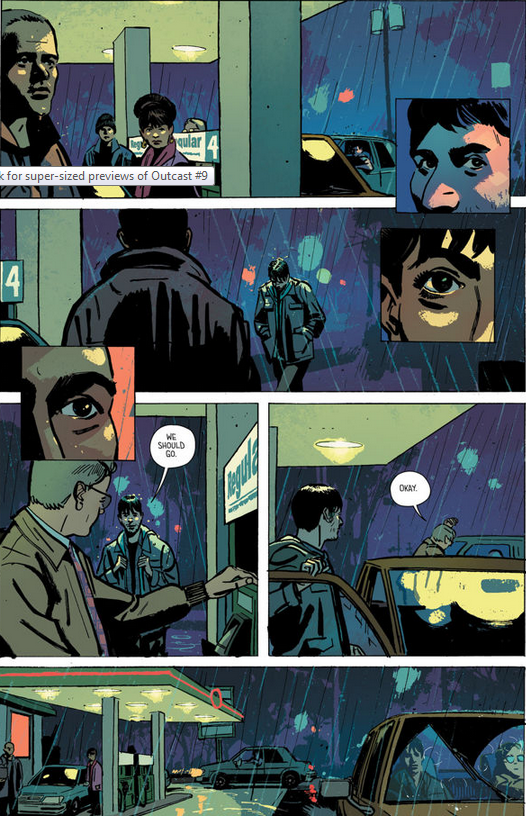 (From Outcast #9 by Robert Kirkman, Paul Azaceta, and Elizabeth Breitweiser)

Apparently the floor above me is being remodeled?  Or my building is getting electrolysis?  Either way, it’s a little distracting.

OUTCAST #9:  Technically, it’s Kirkman and Azaceta’s Outcast, but if I had my druthers it’d be called Kirkman and Azaceta and Breitweiser’s Outcast because oh my god colorist Elizabeth Breitweiser is just doing amazing things with this book: the opening scene with a cryptic encounter (I take it back, if I had my druthers this book would be called Kirkman and Azaceta and Breitweiser’s Cryptic Encounters because that is about 80% of the series) at a gas station just knocked my head back with the miasmatic green neon of the gas station being almost a spectral planee that is swept away by more traditional blues and reds as our heroes drive off.  Oof.  I don’t know how everyone else who’s buying this book is reading it, but for me it’s like watching a really dull horror movie on HBO or something because the cinematography is so beautiful.  I think as long as A and B are still on the book, I’m in.

As for K, I think there’s a really good germ of an idea here–a demon conspiracy versus a mismatched pair of exorcists–but he’s shooting for something a little closer to, say, The Leftovers than, I dunno, Supernatural and it needs a defter touch than Kirkman, owner of the heaviest hands in comics, can deliver.  To be fair, that’s a difficult thing to master: I read Rosemary’s Baby a few weeks ago (after seeing the movie two or three times) and Ira Levin makes that shit look easy and it absolutely is not.  But that doesn’t change the fact that  I frequently ignore what’s going on in the word balloons and just pretend I’m reading a beautiful monthly indy-alt comic about two guys in a dead-end town trying to score some pot.  Robert Kirkman: if you are willing to let me re-dialogue your book every month and release it as Lester and Azaceta and Breitweiser’s Are You Holding, please let me know.  I think I could do a good job of it. 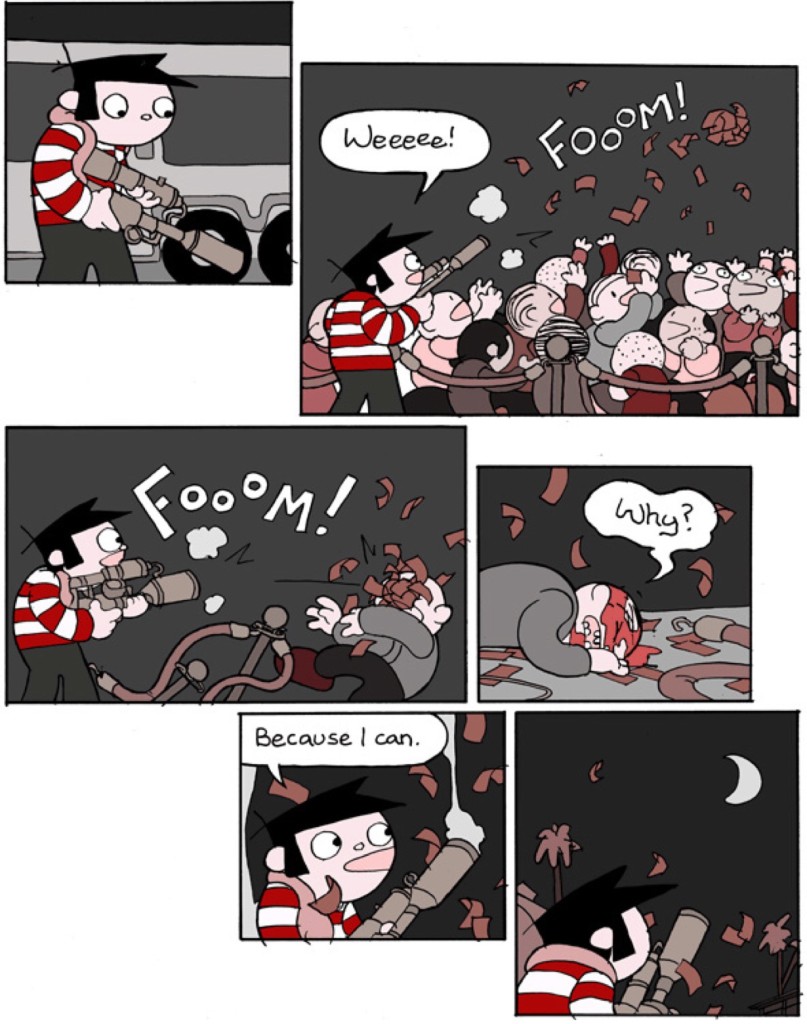 DEMON #13 and #14:  It’s funny.  Maybe because my expectations for issue #13 were so high, I thought it was kinda blah, whereas turning around and reading #14 yesterday, I was like, “oh my god, this is terrific.”  And yet, after a re-read of both issues, I now think issue #13, with its one very significant twist on the established mythology (of course, our hero would totally lie about something crucial) is great and issue #14, with its extended “life is shit” rant is…maybe not paced as well as I would like?  Part of that is surely down to the tease of at the end of #12, which took the book’s setting and upended it, only to find Shiga in issue #13 utterly uninterested in exploring that change.  I don’t know if you can tell, but I’m being vague in case you’re not reading it (and if you’re not, you should go here and rectify that).  Despite my niggling, it’s still a fantastic read and I think people who enjoy cartoonishly nihilistic shenanigans are especially going to enjoy issue #14. 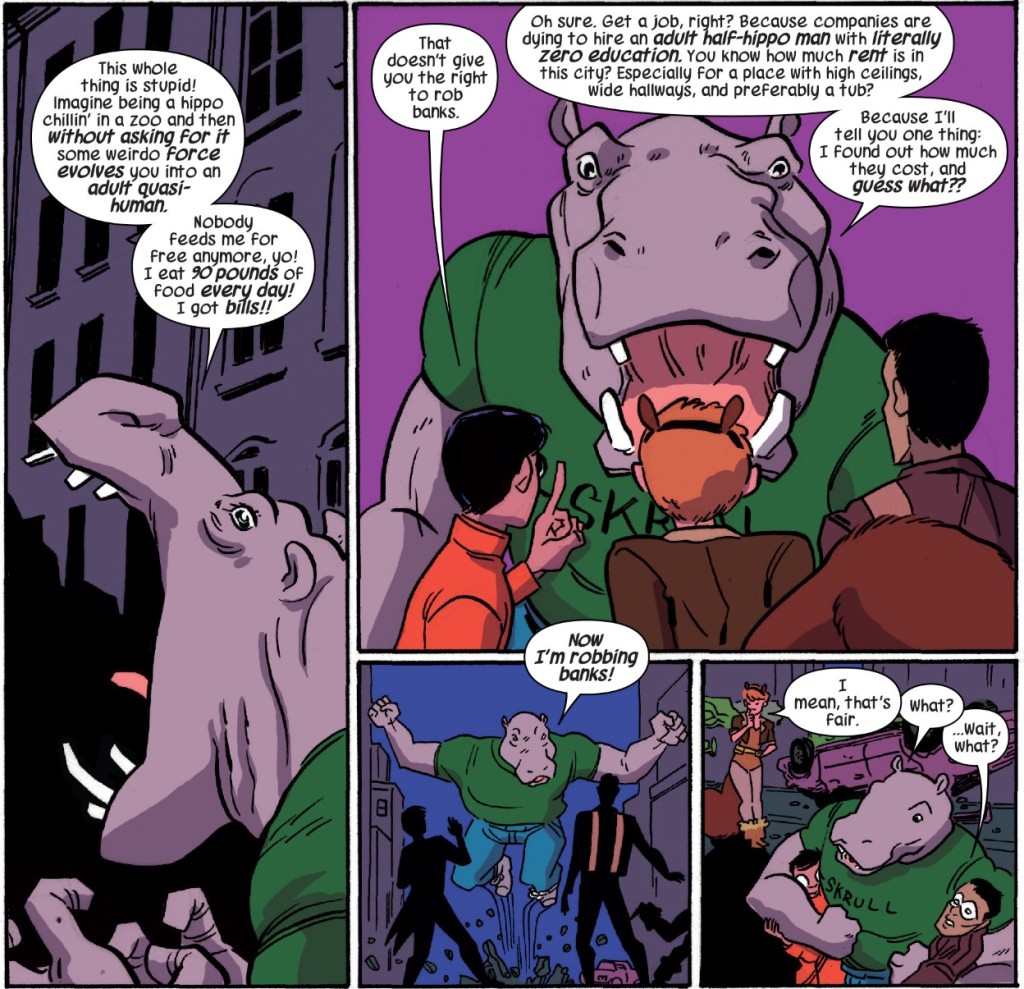 (From The Unbeatable Squirrel Girl #6 by Ryan North, Erica Henderson and Rico Renzi.)

THE UNBEATABLE SQUIRREL GIRL #6:  Apparently, this book is not as successful as Ms. Marvel?  Or even as pretend-successful as Captain Marvel?  And I get it: Squirrel Girl is really weird, a character and superhero book that are blatantly ridiculous and yet–somehow–aren’t trying to ridicule either the character or the idea of superheroes.  Instead, the creators treat both with so much affection that the result is deeply playful, like watching a really smart person entertain kids at a birthday party. 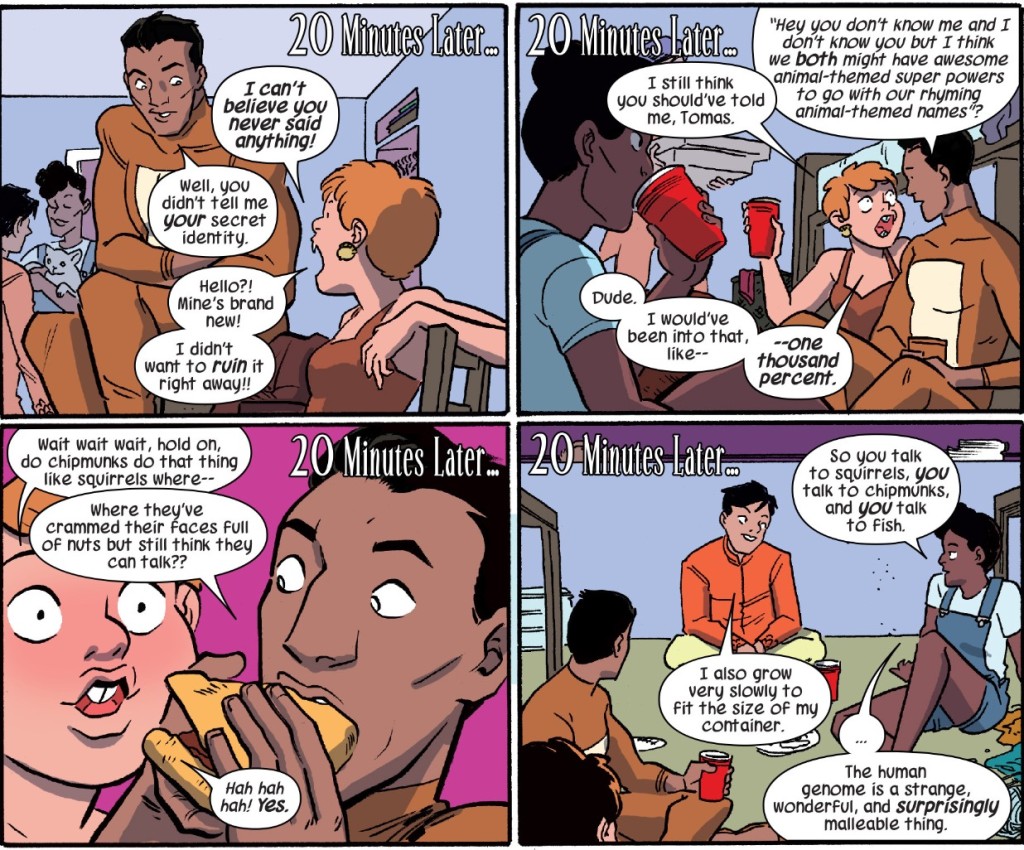 I mean, this issue clearly takes a number of classic tropes (sorry, everybody, I really like that word) and plays with them:  we have Hippo The Hippo, the rampaging animal villain intent on robbing a bank; the debuts of both Chipmunk Hunk and Koi Boi, one of whom is someone Squirrel Girl knows from her civilian life; and of course the debut of Girl Squirrel, the mysterious and suspicious new hero on the scene who threatens to steal Squirrel Girl’s thunder.   In a lot of ways it reminds me of superhero-humor stuff from the ’60s, stuff like The Inferior Five and Angel & The Ape or even Super Goof.  (I’m sure I can’t be the only one who remembers Super Goof, although looking at that Comic Vine link, it seems Gold Key forgot they were publishing it at least once or twice.)

The difference from those books is that The Unbeatable Squirrel Girl is genuinely funny (at least if the idea of cute superhero comedy doesn’t make your stomach churn).  While it’s at least a little safer in its humor, this is basically the superhero equivalent of Unbreakable Kimmy Schmidt (huh, right down to the similar name, how about that).   Again, I get the high barrier to entry but it’s a shame that show got so much attention while this title is hurting for sales.

Ah, well.  If USG doesn’t come back after Marvel does its ironic line-wide relaunch (as several people have assured me it will not be), I do hope North gets a shot at, say, Spider-Man.  If he can get just a little bit of the superhero sour to go along with the sweet, he could be a terrific fit. 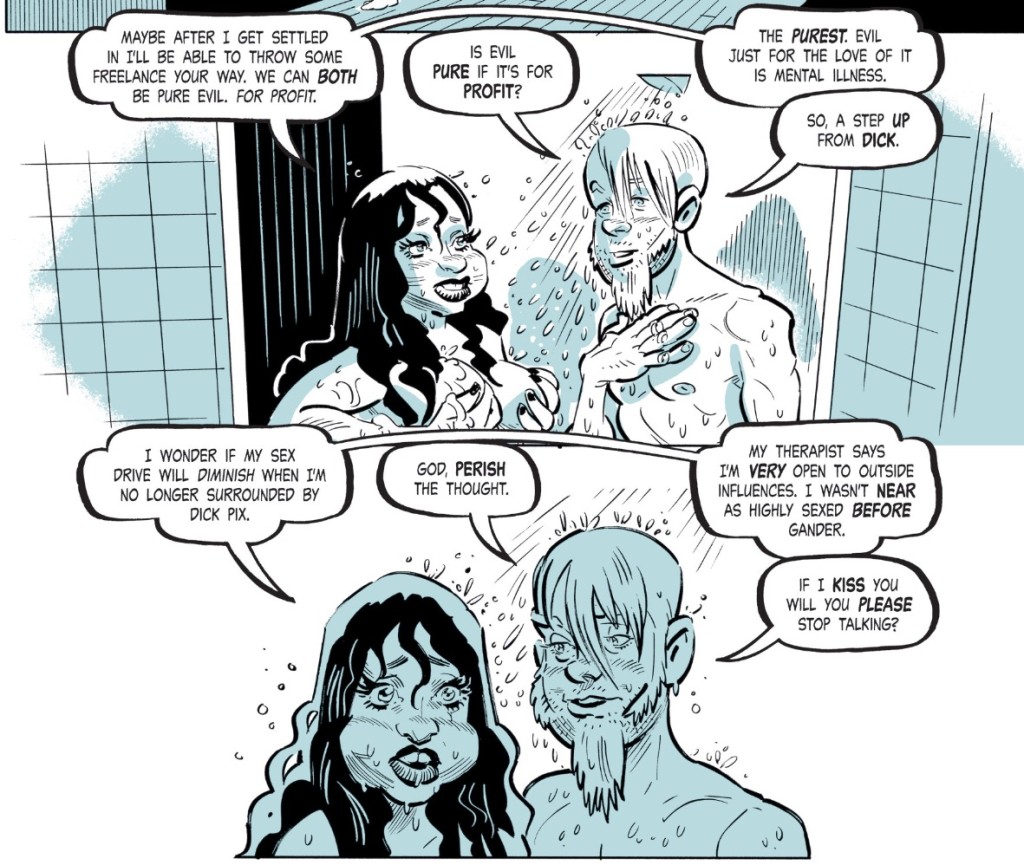 (From Minimum Wage: So Many Bad Decisions #1 by Bob Fingerman.)

MINIMUM WAGE: SO MANY BAD DECISIONS #1 & 2:  I have an uneasy relationship with Bob Fingerman’s Minimum Wage comic but I keep coming back to it nonetheless:  as soon as I found out I’d missed the first issue of this new arc or miniseries, or whatever it is–because yes, I am now that guy who buys his comics without looking at the issue numbers–I was on Comixology snapping it up so I could read it and issue #2 with no delays.

Sometimes I suspect Fingerman thinks he’s drawing the comic book equivalent of Seinfeld as the book is a series of endless meet-ups between Rob and his buddies in their apartments and New York dives as they lament their current relationships, riff on pop culture minutiae, and try to bolster up Rob’s shattered esteem in the wake of his divorce.  But really it’s more like Entourage for old nerds: a celebration of a city it continually pretends to complain about; an ongoing fetishization, not of expensive cars and covergirl models half out of their bikinis and sipping beers at parties at the Hamptons, but of long cab rides and snap-together monster models still mint in the box and throwing up outside punk shows; and, perhaps most-Entourage-y of all, an ongoing bromance  in which everyone marvels at the lead character, punctuated by a parade of sexually available women for Rob to ambivalently bang.

In short, Minimum Wage feels like a book Patton Oswalt jerks off to, and I honestly don’t know how I feel about that.  Fingerman’s stuff feels more rushed to me these days but he’s still capable of drawing stuff that feels to me like the second coming of Mort Drucker–men and women for whom the squiggly line nails their paunchy, sweaty, rumpled existence.  And Fingerman shares Drucker’s ability for exaggerated and yet accurate caricature–the few times he’s dropped Rob’s Tintin hairdo, I realize I’m staring into the face of my upstairs neighbor.

To be perfectly honest, I like that Minimum Wage is such an openly randy book.  I just appreciated it a bit more in Volume 1 where Sylvia, Rob’s (now ex-) wife, was approached with something a lot closer to love. Between the unflattering portraits and Rob’s recently divorced skittishness, the comic mildly skeeves me out every time I read it, seems a little bit closer to cartoon hate-sex than I would like.  And while I think Fingerman is doing so in service of conveying the stew of misery a newly divorced man finds in place of his heart, there’s been very few signs he’s going to be able to deliver anything particularly insightful or cathartic. Hopefully, it’s allowing Mr. Oswalt a nice release of tension and/or making a fine prelude to a good nap, but I can’t get over my doubts enough to fully appreciate it, can’t dismiss my appreciation enough to walk away.