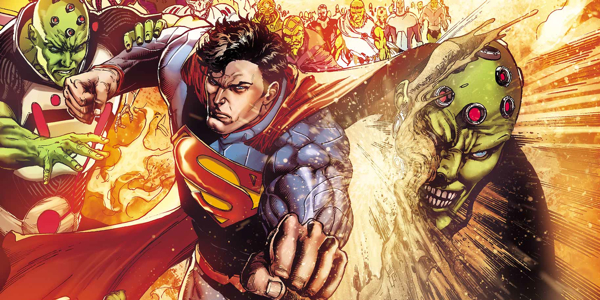 It’s an impressive introductory issue that leaves you more confused than you were before you started reading it, but never let it be said that Convergence #0 lacks ambition. Coherence, sure, it lacks that in spades, but ambition? It’s definitely got that. More after the jump, but if you haven’t already heard this week’s episode of the podcast, scroll down a couple entries. I’ll wait.

In theory, this is the issue that sets up the Convergence event that runs through April and May, replacing the regular DC superhero books with a vast number of alternate-world books offering up a mix of Greatest Hits and When Heroes Clash tropes. I say “in theory,” because while this issue does explain that Brainiac has been stealing cities and putting them on a planet for his own purposes, it doesn’t really explain anything in any kind of easily understandable way.

(It also, thanks to some genuinely baffling choices by Ethan Van Sciver, doesn’t really establish the multiple realities that theoretically appear in the issue, nor for that matter show more than one single city under a dome at any one time — something that you’d think would be a gimme for a comic that’s supposed to establish multiple cities under domes. There’re also some layout choices that make the pages very hard to read on first go through, which again feels like a brave — read, “the wrong” — choice for something that should be as new-reader friendly as the first issue of a much-hyped event.) 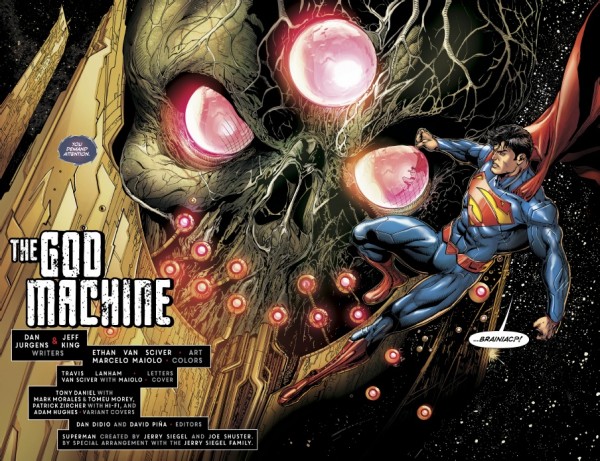 But as confusing and unhelpful as the art is — and it is very confusing and unhelpful — the writing is even moreso, starting with the utterly inexplicable decision to seemingly set this issue immediately after the end of Superman: Doomed, a crossover event that finished back in September, except without any kind of editorial note to clarify that for newcomers unfamiliar with that storyline. Instead, it opens with Superman’s narration explaining “The last thing I remember is… Brainiac infecting me with the Doomsday virus…”

Superman then has a conversation with Brainiac in which he explains that all the Brainiacs we’ve seen before are “an unknown extension of my consciousness” — something which doesn’t really jibe with the end we saw in Superman: Doomed, wherein that particular Brainiac discovered the multiverse all by himself, but you know, I survived Countdown to Final Crisis and Final Crisis, so this is nothing — before disappearing to get a city from the regular “New 52” DCU, except… when does that happen? Is that a reference to New 52: Futures End? Grant Morrison’s Action Comics? Neither, and something we’ll see in later parts of Convergence?

Maybe it’s the latter, because the issue ends with Superman flying off after him, but as Superman: Doomed showed, Superman didn’t come out of the black hole he shoved Brainiac into saying “I just met a giant Brainiac and he’s going to steal a city on Earth, oh man, I should do something…!” 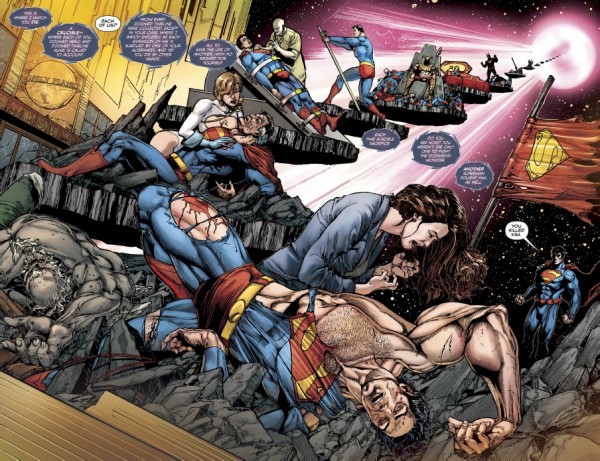 Such matters of continuity aside, the issue remains filled with strange, nonsensical pieces of dialogue, bizarre jumps in framing — Superman literally goes from floating in space to being chained up between panels, with no explanation, but there is a jump in dialogue; I genuinely don’t know if it’s an intentional cut, or a page is somehow missing from the story — and a Superman that’s not even out of character as much as entirely without character altogether, a central figure that’s somehow entirely absent from the story beyond demanding explanations and punching things. There’s nothing here to convince anyone sampling the event — or, DC comics as a whole — to stick around.

Worse yet, it’s such a misfire of an issue — not even of the start of an event or even the start of a series, but a misfire of an attempt at an interesting single issue that makes narrative sense — that it pretty much deadens my desire to read the rest of the series. Sure, it might be better than this issue (It almost certainly has to be, in some respects), but nonetheless, this issue fails so badly at setting up everything that’s to come, at summing up the basics of everything that’s gone before, and at just telling a story that makes sense on a basic level even as a first chapter of a larger story, that I’m finding it hard to get too excited about reading another eight issues of this.

All told, then, Convergence #0 is a bit of a disaster. For all that DC feels like it’s turning around its creative fortunes — and I really think that it is, with everything that’s coming out in June — this feels like everything that’s been bad about the New 52, all rolled into one comic. To put it mildly, it’s a massive disappointment.

4 comments on “Crisis in 30 Pages: Graeme Really Didn’t Like Convergence #0”