The fourth week of Convergence books from DC is arguably the most mixed yet, devoted to — in theory — golden age titles and related works, but in reality, something altogether different (How else could Booster Gold or Blue Beetle end up in here?). It’s also, oddly enough, the week when my exhaustion with the event won out, and I struggled to finish many of the books on offer.

Part of that, perhaps, might have been down to a lack of nostalgia in the majority of the titles or characters on offer — I loved World’s Finest back in the day, but that was a series about Superman and Batman teaming up, not the Seven Soldiers of Victory, many of whom are dead, for example. Same with Detective Comics, which really couldn’t fire up my interest in the Earth-2 Huntress and Robin no matter how hard it tried; it’s meant to be a book about Batman, goddammit.

Aside from that, there’s the fact that it was an depressingly poor week in terms of quality; Action Comics, Justice Society of America and Blue Beetle suffer from going over ground that’s been well traveled in the earlier three weeks of the event, coming across as dull as a result. Plastic Man and the Freedom Fighters and Crime Syndicate felt too grim for the characters they were dealing with, and lacking enough of an individual voice to overcome that, while World’s Finest and Detective Comics felt aimless and as if they were playing for time, waiting for the reveal of the dome falling and the characters getting their powers back — something that, even if we hadn’t known it was part of the concept from the pre-release hype, we’ve already seen in 30 different comics before now.

That leaves three titles: Infinity Inc., Booster Gold and Shazam. All of them are doing something different than the books around them, with varying degrees of success. Booster Gold is the flop, with a story that pretty much ignores the traditional set up of the event tie-ins in favor of a time/continuity travel story that features two Boosters somehow coexisting, except… I’m not quite sure which was which, why it’s important that there are two, or what importance one has to another in an event which features multiple versions of the same characters. 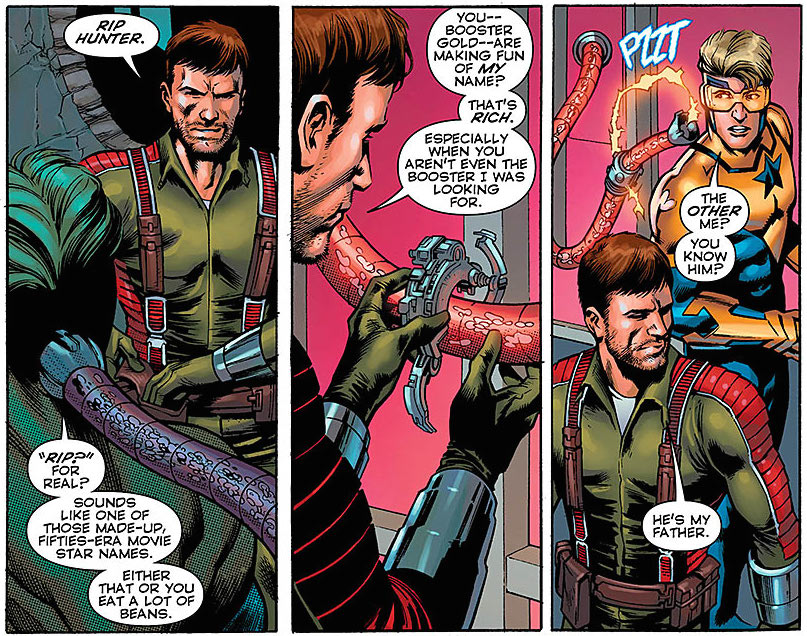 Infinity Inc., however, is a far more interesting proposition. Returning to the series’ roots as a generational saga featuring children of the world’s first superheroes, Jerry Ordway’s writing manages to recapture some of the feel of the book’s first issues at the same time as Ben Caldwell’s art makes it feel amazingly contemporary and fresh. It’s a nice mix, and something I’d be interested in seeing as a long form series, if only to see where the combination of the two could end up going if given more space than two issues to play with. 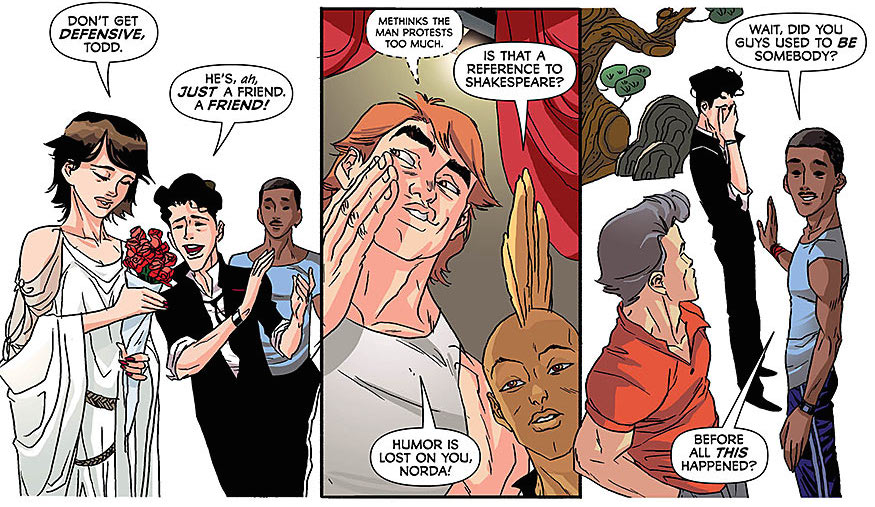 The best of the week, however, is easily Shazam, in which Jeff Parker and Evan Shaner (aided with some great color work from Jordie Bellaire easily recreate the feel of a classic CC Beck comic without making it seem dated, working the power loss aspect of the Convergence high concept into the storyline in a way that makes it seem part of one grand adventure, rather than a crossover that needed to be worked into everything else. It’s a joy to read, seeming light and effortless and fun in a way that even the team’s earlier Flash Gordon didn’t match. It’s so good, it feels like a book that even haters could claim is reason enough for the larger Convergence event to exist. (And, wonderfully, it requires very little knowledge about the rest of Convergence to work; anyone could — and should — dive in.)

With the event’s first month done, it should be noted — Convergence as a whole is exhausting, and I say that as a massive DC fan. I can’t believe that anyone is really expected to be reading the whole thing, and I’m also very curious about how it’s going over with readers who aren’t so into the nostalgia aspect of the whole thing. My enthusiasm probably peaked… somewhere between the second and third weeks, I think…? There are some great books in the avalanche of material released — Shazam and The Question would make great ongoings, and I admit it, I’d probably pick up a Tom Peyer-written Atom on a regular basis as well, not to mention an ongoing for Justice League Detroit by the Nicieza/Cross team — but in terms of signal to noise, there’s a risk that the good stuff is being drowned out by the not-so-good.

One thing is for sure, however; Convergence has, intentionally or otherwise, convinced me that I definitely want to avoid Secret Wars as much as possible. Two months of this for a fictional universe I have a strong affection for is hard enough: four or five months of this kind of thing (except with even more series) for a line I’m much less enamored with? Most definitely file under “not for me.” If Convergence was planned as a spoiler for Secret Wars, then it’s mission accomplished — but surely DC wouldn’t have done that, would they?