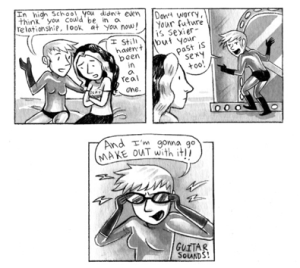 I’m always a sucker for easy symmetry, so it’s probably just as well I didn’t run across Jess Fink’s “Time Travel Memoir,” We Can Fix It!, the same week Seconds by Bryan Lee O’Malley came out.  After all, Seconds is an impeccably colored and formatted OGN about a woman on the crest of thirty who can’t stop trying to fix her past via a handful of time-changing mushrooms, and We Can Fix It! is an 108 page black and white OGN about the author putting on a form-fitting jumpsuit and jumping back in time so she can correct early mistakes she made as a teen while trying to get it on.

And of course, the very first time she does, she ends up having sex with herself.

Some people have dinged Seconds for Katie, O’Malley’s protagonist, having learned so little by the end of the graphic novel and also for what she’s learned being so obvious–her boss points out a poster of the Serenity Pledge hanging on the wall the whole time that could’ve have taught her the same thing–but it seems to me that one of the toughest life lessons adulthood gives you is how little platitudes actually mean until you’ve earned their meaning for yourself.  A lot of art aspires to be instructive, and god knows as a culture we consume a lot of it, so we’re pretty much up to speed on the big stuff by the time we’re teens. But everyone has a blind spot–several of them, of course–and not all located in the same corner of our vision.  Before we can learn to accept what we cannot change, we have to learn to identify it.

So part of what’s fun about reading We Can Fix It!, especially in the wake of reading Seconds (although Top Shelf released Fink’s book in 2013, so there’s some non-linear hijinks happening on the part of this reviewer as much as in either narrative) is how Fink and O’Malley take much of the same premise and do it differently for different reasons.  Katie uses her magic re-do to change the course of her career, revive a romance that should have ended, and undo emotional pain.  Jess Fink uses her time machine to teach her younger self how to give a good blow job.

I’m in awe of this.  Fink has taken the experience of the cringe of self-regret interrupting rubbing one out to a past exploit, and used it as the basis for a time travel novel, and as such, We Can Fix It! is an enjoyably embarrassing book to read (although maybe talking about it is proving to be more embarrassing than anything else).  But it’s also a surprisingly effective way to use time travel–one of my formative experiences was reading David Gerrold’s The Man Who Folded Himself, where a man who inherits a time belt ultimately ends up having sex with himself, then a relationship, then meets and marries a female iteration, and ends up having a child who grows up, of course, to become himself.

I should point out that all of the above is only the first third of the book:  for the remainder, Fink’s time traveler tries to then fix *all* the problems of her past selves with the traditional mixed bag of results.  After Fink gives up on trying to save herself from problems and complications, she spends time just reliving moments from her past without trying to fix them.  The book’s plot is a low-key affair, scenes moving from hijnks to misfire to regret to acceptance in an enjoyably low-stakes way.  The past can’t really be changed, and that is frequently the most painful lesson it teaches, but thanks to a jumpsuit and the recurring sound effect “Zippity-Zap!”, Fink also gets to take a dump on a bully’s head, revisit a tender, funny make-out session that can’t seem to end, and acknowledge the pain of an abusive father.  There’s no frozen half-destroyed world to be escaped from here; the time-traveling conceit ultimately becomes a loopy take on a memoir, with Fink’s time-traveler just being a much more hands-on version of the memoirist’s narrative take.  And this too seems clever and fitting to me since the memoir, like the time travel story, also frequently succumbs to solipsism and onanism.

I should also mention how much, after the deluxe production of Seconds, I enjoyed the low-fi approach of We Can Fix It!  The grayscale coloring, along with the  somewhat iffy DPI of the image resolution gives the impression of a book drawn in pencil, a story drawn to amuse oneself or a close friend, and this intimacy lends the right balance to Fink’s high-concept, as does her loosely drawn but well-observed cartooning: when time-traveling Jess, trying to avoid being recognized by her friends in the past, pulls the collar of her jumpsuit up over her face, Fink perfectly captures what that does to someone’s body posture, the resulting goofy creepiness.  And I love how when Fink makes out with herself (or later engages in an all -Jess orgy), she portrays her passion as open-eyed, mindless, and a little afraid: she looks almost like a startled deer, struck dumb by what’s overtaken her.

So, yeah.  A fun compare/contrast, sure.  But also a very enjoyable little book on its own.  At the very least, worth peeking around your library to see if there’s a copy you can check out. 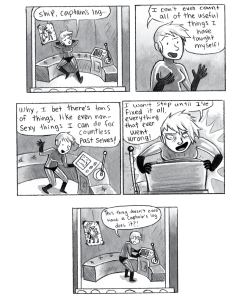