One of the things about growing older, at least for me, is a loss of being certain exactly when anything happened, unless there was a particular identifier surrounding an event. What I mean is, I can’t swear that my reborn love of Marvel’s Micronauts series is, for certain, something that’s just happened in 2014 or started last year and I’m crushing time together subconsciously to make myself feel older (I suspect it’s the latter). Nonetheless, after re-reading Micronauts: Special Edition, the five-issue reprint of the original Mantlo/Golden issues, it’s something that I’m closing out the year utterly obsessed by, all over again. 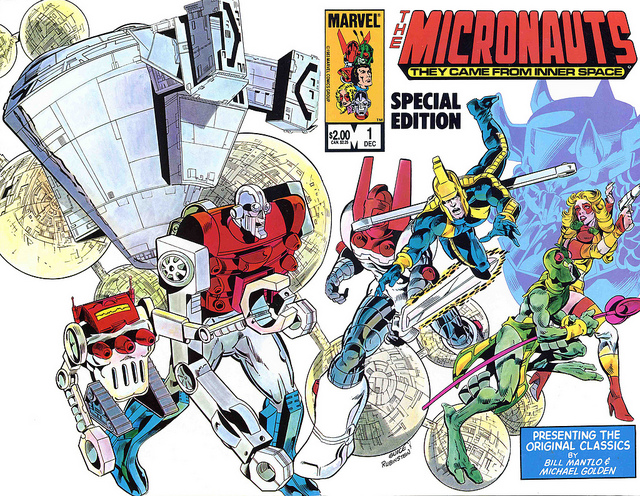 Even someone who didn’t grow up with this stuff — I read the reprints in Future Tense, a short-lived British anthology title from Marvel UK at a truly-impressionable age, although it was Mantlo and Broderick at the time — there’s little doubt that it would seem instantly familiar; Mantlo’s particular genius with Micronauts, especially these earliest issues, is the way in which he steals from everything to build the mythos. It’s Kirby’s Fourth World mixed with Lucas’ Star Wars, most obviously — not only are Biotron and Microtron very obviously inspired by C3-PO and R2-D2, but the end of the first issue features Commander Rann, talking about his ship in a very Han Solo-esque manner: “This lady’s had some surprises built into her by Biotron and me over the past 1,000 years!” — but there’s a lot of other stuff to be uncovered. Rann’s origin story is lifted wholesale from the original Guardians of the Galaxy, and there’s a feel of Lost in Space to the whole thing.

And yet, it all works. Somehow, through design or sheer force of magpie will, Mantlo pushes it all into a cohesive whole that’s as exciting as it is shameless; his (previously unnoticed by me, until this re-read) Bob Haney-esque captions help (“Rebellion! It is not a very lovely word!” goes the opening of the first issue), but his ability to keep things moving forward towards a suitably epic conclusion — “Is it hours or days they fight? On a platform of ethereal energy, suspended above the molten core of the great pit, time seems to stand still as the two titans clash again and again,” as Mantlo puts the final battle — makes the entire five issue run (well, twelve issues, really; the “Special Editions” collect the twelve issues of the regular series) speed by. 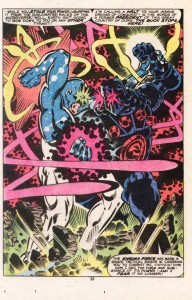 He’s helped immeasurably by the Michael Golden art, of course, which is suitably melodramatic and dynamic in a way that immediately dates it — comics just don’t do the kinds of layouts and lighting anymore, unfortunately. You can see Golden evolve as an artist throughout the run — his line becoming more stylized and his characters more cartoony, gloriously so — keeping the eye busy and helping to paper over some of the cracks in Mantlo’s writing; there are lines to trace back to Kirby and, interestingly enough, Will Eisner in his work here, and it makes for fascinating viewing even with the muddy color reproductions in these editions. (He never quite learns the importance of drawing backgrounds, however; Golden, I’m looking to you for much of the Image era’s excesses!)

Every time I revisit these issues, I’m struck by the way they feel like a perfect summation of where superhero comics were at the time they were originally published — despite not being a superhero comic, per se, nor being in print for… what, the last three decades? — and a sign of what was to come. In their own quaintly innocent way, they’re ambitious and entirely derivative, heartfelt and cynical, and filled with personality despite their toy tie-in origins. It’s the missing link between the days of yore and today, and some of my favorite comics ever. For those looking for dollar bin treasures, this is your new destination. You’ll thank me later.

(Real talk: One day, when I have managed to finish my own back issue diving and have a complete collection of this series, I’m going to convince Jeff to gather his own so we can do an Avengers-style re-read. This material is unlikely to ever be reprinted due to the complicated rights between Marvel and whoever controls the MEGO rights these days, but if ever any 1970s sci-fi series that isn’t called 2000AD that’s worthy of deeper investigation, it’s Micronauts. Maybe in 2016, post-Fantastic Four…)

2 comments on “They Came From Inner Nostalgia! Graeme on Micronauts”