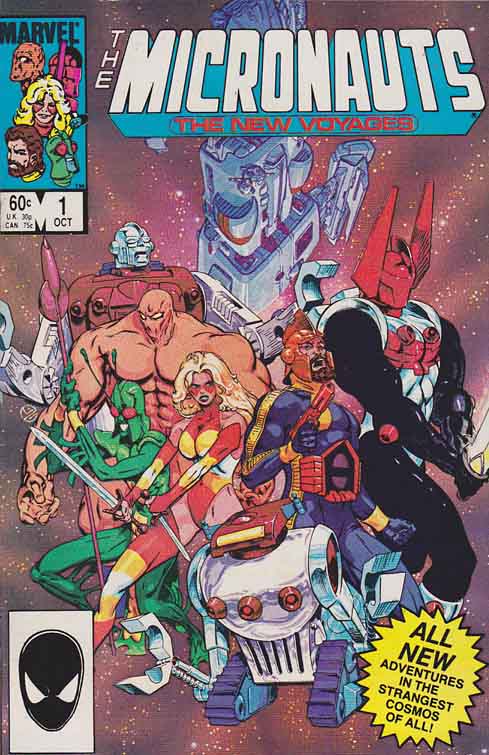 So, I got the first five issues of Micronauts: The New Voyages from the local comic store during its latest 50% off sale (because, really, if you can’t buy mid-period Peter B. Gillis/early-ass Kelley Jones for $1.50 an issue, when can you buy it?). My thinking was pretty much, hey, I like Mantlo’s Micronauts and I remember reading some of this at the time and thinking it was too trippy for the 11-year-old I was at the time, so I’ll love it now, right? As you might expect, the answer is “no.”

You have to feel for Gillis, though; he inherited the series from its original writer, and Bill Mantlo has pretty much run the Star Wars-esque hi-jinks and adventure formula into the ground by the time he stepped away. Even if the title hadn’t been relaunched to return to the newsstands — presumably, sales on the direct-market Micronauts title were tanking badly enough that Mantlo’s departure seemed like time for an intervention — he would have had to do something pretty drastic to turn the book around and make it his own.

And what he does is, in a way, fascinating; it feels very 1970s prog rock, just a decade too late — and not least of all because Jones’ Commander Rann is rocking the overgrown beardy-weirdy look even before he loses a hand in the first issue and increasingly retreats into Cosmic Messiah mode. The first issue, more than anything, feels like both Jones and Gillis had watched Ridley Scott’s Alien and said to each other, “Just how directly can we lift from this without anyone noticing?” (John Carpenter’s Dark Star, from earlier that decade, is another heavy influence, at least to my eyes.)

After a visit to a mysterious cavern filled with alien eggs — hope no-one really wanted that plot resolved, because it’s ultimately a macguffin for two different ulterior motives — the Micronauts are thrown outside of the galaxy as they know it, and go exploring while, unbeknownst to them, they die from radiation poisoning because… well, it seemed like a good idea at the time. There’s lots of different ideas on display in these issues, but the problem is that none of them really stick in anyway, and the book feels directionless and haphazard as a result.

Tonally, the book is all over the place, with characters going from giddily giggling to melancholic apathy seemingly at random, and that lack of consistency is mirrored in the art, which shows signs of the gothic melodrama that Jones would later perfect, but is all too often buried under unsympathetic inks by Bruce Patterson or uninspired layouts. (Also, Jones is surprisingly fascinated in the brokeback pose, decades before it’d turn into an Internet meme). In so many ways, it’s an utter mess of a book. 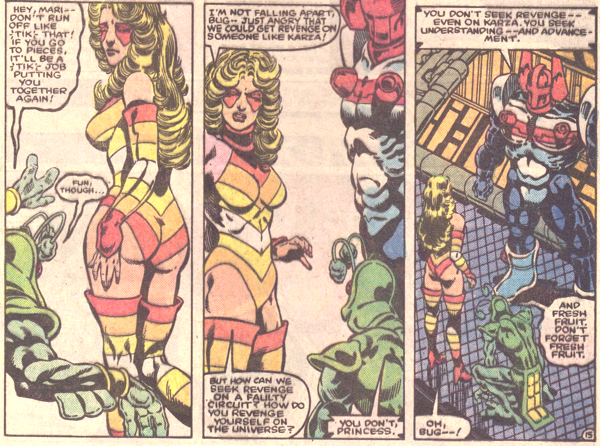 More surprisingly, it’s a dull mess; you’d think that, with all the ideas on offer and the influences at play and the talent working on it (even if they can’t quite make it work as such), the result would at least be interesting, but it’s not; I struggled to finish issues because they felt like sedatives, and almost immediately after finishing one, I’d have trouble remembering what had actually happened in it. This is the worst sin of all, considering the pedigree of what Gillis and Jones were following; the original Micronauts comics were a pulpy mixture of all kinds of sci-fi ephemera all pushed together without fear, and endlessly fun as a result. The New Voyages? It’s forgettable, which feels like a betrayal by comparison.

I’d gone in, half-expecting disaster and trusting that my affection for Rann, Bug, Acroyear and the others would pull me through, but it didn’t work out that way — these aren’t the same characters from the earlier series, despite what people try to tell you. These aren’t really characters at all, really; they’re props moved about a half-finished stage as Gillis and Jones tried to work out what they were trying to do with them. Don’t get me wrong; there’s potential here — I remember the end of the series having much more intensity and, thankfully, weirdness — but these opening issues…? Not even worth the $7.50 I spent on them.

Nice Michael Golden cover on that first issue, though.

3 comments on “Where No Micronaut Had Gone Before, For Good Reason: Graeme Revisits the Microverse”