One of the unexpected bonuses of Marvel’s increased release frequency is the inevitable discovery, if you’re a Marvel Unlimited subscriber, that you’ve got a bunch of issues to catch up on of whatever relatively-contemporary series you thought you were following. Over the last week or so, I’ve realized that I had issues of All-New X-Men, Uncanny X-Men and a handful of other books to read, and also the chance to sit down and go through Original Sin #1-5 in one sitting, despite being convinced the first issue had only just popped up before Christmas.

That, it turns out, wasn’t the best idea.

When you read the first half of Original Sin in one sitting, it becomes very obvious that there’s nothing to the series. Or, rather, that there’re too many things going on for it to actually be about anything coherent. In the space of those five issues, the Watcher is discovered murdered, heroes set out to find out who did it which leads them to be whammied by… something that makes them all remember things they didn’t before, which isn’t really followed up in the main book at all, and then Bucky kills Nick Fury only for it to turn out that it wasn’t really Nick Fury because he’s old and by the way, he’s been saving the world from aliens in secret for years and… I think you get the picture.

Based on this chunk of issues, it’s difficult (if not downright impossible) to imagine the series finishing in any kind of truly satisfying way; there are too many things being thrown in the air to imagine them all being tied up in a fulfilling manner with just three issues left. I’ve not even gotten into the appearances of Dr. Midas and Exterminatrix from Marvel Boy for seemingly no reason other than he digs them, nor the amount of page real estate spent on Nick Fury’s backstory in the fifth issue to establish… well, I’m not entirely sure what. His bona fides, maybe? Because… no-one believed that Nick Fury was a bad-ass before that…? 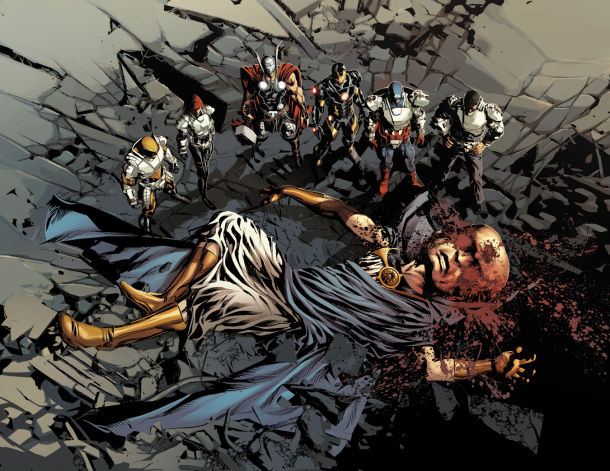 The trouble isn’t that Original Sin is devoid of ideas, it’s that it prefers to conjure up something else to distract you instead of developing any of the ideas it’s already presented. I have no problem with comic books as wacky spectacle, especially superhero comics, but for them to work, the spectacle has to have some level of substance to it, some willingness to engage with the reader and do something more than just high concept pitch itself to the last page. There’s a lot of really interesting material on show in these pages, but it’s delivered in a manner that makes the series seem like an easily-distracted kid, over-eager to impress. You almost want to reach into the comic and wipe the flop sweat off Jason Aaron’s forehead, and tell him that he can slow down and we’ll still be paying attention.

(There are problems with the structure of Original Sin that aren’t Aaron’s fault, I feel like I should point out; the whole “everyone remembers something important” thread is almost assuredly created to give the book tie-in potential, but the fact that those revelations only fuel those tie-ins, instead of driving the plot here, makes it feel unnecessary, and a distraction from the Watcher’s death even before that plot morphs into the Nick Fury plot with the series’ fifth issue. There’s a throughline of sorts there, but adding the “Oh no! Shock revelation!” element pulls the balance off.)

(A second aside, for a second; it’s difficult to say Original Sin has leads, per se — maybe Bucky and Nick Fury, but otherwise everyone else is a cypher and likely to cycle in and out of the story as needs and tie-ins demand — but it got me thinking about the casting of event comics at Marvel nonetheless. Remember when the point of events was that all your favorite heroes would get together? These days, that doesn’t really happen in events — the heroes will work in smaller teams, taking on different aspects of a problem — and the home for the massive team-up is in regular titles like Avengers. I read criticism of the Axis event that argued, essentially, that it just felt like an Uncanny Avengers storyline super-sized up, but isn’t that just what all Marvel’s events feel like these days?)

Stuck with an over-active, over-stuffed story, Original Sin needs art that can somehow normalize everything, making the book feel better paced and more coherent than it actually is; sadly, it has Mike Deodato, who certainly gives everything the same look — unfortunately, that look is “overly dark and shadowy, with lots of rendering that almost disguises the fact that his characters are worryingly generic and stiff, thereby killing a lot of the comedy implicit in Aaron’s dialogue.” Deodato’s not a bad artist for some writers (his machismo actually plays well with Bendis’ overly wordy writing, creating an oddly dissonant whole that’s more interesting than either is capable of solo, for example), but he doesn’t play well with the casual, cartoony appeal of Aaron’s superhero writing. Putting him on a book where Aaron is off his game only emphasizes the mismatch.

Original Sin is, then, another event book that fails. If I was paying money for this book alone, I’d likely have stopped buying by this point — but another bonus of Marvel Unlimited is the fact that failures are included in the price of admission. I’m sticking around for the whole thing to play out, even if I’m doing so six months later than first adopters. Why not? All it costs me is time.

4 comments on “Just Don’t Dispose of Your Natural Soul: Graeme Catches Up On Original Sin”