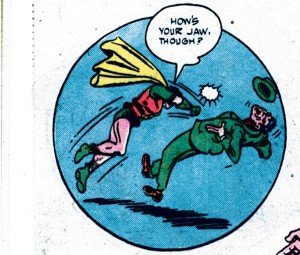 Man, no sooner have you survived the bombardment that was San Diego Comic Con than here comes the two hour and forty-nine minute missile that is Wait, What? Ep. 155, with Graeme and Jeff talking about San Diego Comic Con….and the Image Expo….and Marvel’s diverse attempts to diversify its diversity…and Bryan Lee O’Malley’s Seconds, and Supreme: Black Rose, and G.I. Joe Vs. Transformers #1 and, oh yes, more than an hour spent discussing Avengers #152-178 (give or take a few issues.)

Join me after the leap for the show notes, eh?

First off, I know what you’re wondering.  You’re wondering:  what will Jeff apologize for this time, and what will be his excuse.  Well, the excuse is I strained my back during a work out (that’ll teach me to try and be healthy) so up until last night I was spending a lot of time with my good friend cyclobenzaprine.  I actually hate the stuff because it makes me slow and stupid, but I also hate having pain bound through me like a pinball every time I bend over, so…. But consequently, I really doubled down on the dumb: once when talking to Graeme, and once when writing the majority of the show notes.

So, just remember that this is me:

and you’ll be fine.  Enjoy the ride, everyone!

00:00-15:16: Greetings from the people who didn’t go to San Diego Comic-Con but recorded their podcast during San Diego Comic-Con! Learn about Graeme’s relief, Jeff’s crowd-related neuroses, a few mentions of Burning Man as required by the California Podcasting Regulatory Act, and our take on the news at Comicon—who breaks it and how, who reads it and how.
15:16-30:56: Related—some talk about the Image Expo portion of the SDCC/pre-SDCC.  I should really look up which one it is but am kinda enjoying flaunting my ignorance. Does this mean that Jeff will hunt down the statement that drove him bananas? (Well, he can’t find it right now so….maybe he did hallucinate it?) Graeme ponders how words like diversity are being used, what we should expect from a keynote, and remembering to keep his mind on not hating the players, but hating the game.

30:56-46:06: Here’s a question: how woozy was Jeff from the muscle relaxants? Here’s a tip: he has to ask Graeme what stupid, self-aggrandizing shit Marvel said about itself the week before last? Oh, right: Lady Thor! Sam Wilson as Captain America! A roll of Reynolds Aluminum Wrap as Iron Man! All this, plus: conspiracies! oversights! opinions! freak-outs! can’t-win situations! Comics, everybody! (Please don’t take away my exclamation points, I think I need them even more than the cyclobenzaprine.) But, really, people: what does it say when white male writers are writing books with leads who are women and people of color, and alll the women at the same company are only writing leads who are women? It’s a tad exasperating. (Comical understatement? Or an underlining of how little skin privileged white dudes like us actually have in the game? U-Decide!) But, you know, listen to Graeme break down Marvel today v. the Marvel of 30 years ago and give it some thinks.
46:06-59:32: A combo cheap shot/segue from Graeme brings us to the glory that is Tom Scioli and John Barber’s Transformers vs. G.I. Joe #1 just out from IDW, aptly described Mr. McMillan as “one of the most enjoyable comics I’ve read this year.” We talk Steranko, we talk coloring, we use the word “toyetic” maybe one or two many times? But we mean well, and it’s a book you may want to check out if you haven’t yet.
59:32-1:11:49: Graeme mentions the Frankenstein Comic Meet in Portland, OR, as a way to talk about the issues he picked up of Jack Kirby’s Captain Victory and the Galactic Rangers comic. Oh, Jack Kirby! We heart you so, and Graeme’s description of this amazing-sounding book partly explains why. Jeff mentions his Sketchbook post about The Hulk and how it keys in to some of what he loves about Kirby including some stuff that didn’t make it into the entry.
Also, as we do from time to time, Graeme and Jeff discuss something Tom Brevoort has written. This episode’s spin? It’s a letter published in a comic.
1:11:49-1:15:01: Man, Jeff really loved that issue of Afterlife of Archie #6 by Roberto Aguirre-Sacasa and Francesco Francavilla. Sabrina The Teenage Witch; H.P. Lovecraft; Rosemary’s Baby; The Wicker Man; and about ten tons of awesome.
1:15:01-1:20:19: Also worthy of discussion—Saga #21. Is this the issue where Graeme goes off the series? Is this the discussion where Jeff makes some “hmm!”-ing noises, then some “ummm”-ing sounds, and starts a lot of his sentences by saying “Well,” a lot? (Wait, am I giving away too much?) 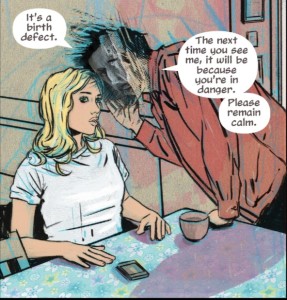 1:20:19-1:28:50: Supreme: Blue Rose #1 by Warren Ellis and Tula Lotay. Graeme read it in both digital and print, Jeff read it digitally, and Graeme had some very interesting reactions. Disconnection, disruption, curation? Or the first of six issues before fucking off to the pub?
1:28:50-1:43:18: Seconds, by Bryan Lee O’Malley. Jeff has read it, Graeme has not. FIGHT!
(Editor’s Note: we do not fight.)
Phrases used: “second album,” “zero sum game,” “slacker Miyazaki,” “hefty price tag,” “a really good chance at finding a readership; it’s going to have a life.” Oh, and “Thanos,” I mean, of course, “Thanos.” Of course.
1:43:18-2:29:31: Avengers time! We talk Avengers #152 through approx. 178 (Graeme has read a bit beyond that). A lot of talk about Jim Shooter as writer; his foibles and his “one story;” the fill-in issue myth as it applies to Avengers, post-Englehart; Justice League fan fiction:, the “Marvel dynamic;” Kang, the “girl-crazy invader from time;” Jeff and Graeme speculating on some odd plot choices; and, of course, Glengarry Glen Ross. (Of course!) We also used the phrase “weirdly readable” a disturbing number of times.
2:29:31-2:42:01: Closing comments? Well, we’re getting there but we have to blab just a bit about Avengers #178, a fill-in written by Steve Gerber and drawn by Carmine Infantino that’s markedly strange. Graeme goes a bit “Lord of the Flies” on us, so we call back for more closing comments that really are mostly us still obsessing over these Avengers issues.
2:42:01-end: Closing comments! No, really! This time for sure! We have some updates about our patreon, as well as some fantastic other projects we’re planning to support: Rachel and Miles X-plain the X-Men; those loveable scamps at The Outhouse; the amazing Heidi McDonald and her site, The Beat, and a few others. Also, also: Jeff’s pitch for a new Captain America series and then we are out of there! Um, I mean, here!  Or…?

And so that is that, right?  Essentially? Some of you have been saying you like having the download link directly in the post so here you go:

Otherwise, seek out the RSS feed, hunt us up on iTunes, or listen to us right here in the post.  It’s all good, brah.  Now if you excuse me, I’m gonna go collapse on that divan over there…