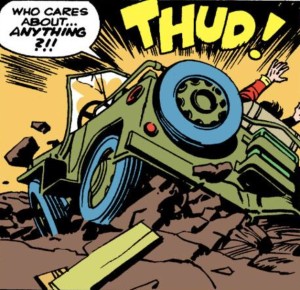 Thought I’d try something a little different from the usual here’s-what-I-read-and-here’s-why-I’m-a-bad-person-for-not-liking-it capsule reviews—I’m going to just give you my take on a character. Or a concept. Something that might not be tied down to what I’m currently reading.

So: The Hulk. Here are a couple of things about The Hulk. (Spoilers: at some point, I’ll probably just call him Hulk.)

He needs his pants.

You’ve heard the jokes about the Hulk’s pants. Maybe you’ve made jokes about the Hulk’s pants. I don’t blame you, I’m sure I’ve done the same. (Though either middle age or protective hysteria is preventing me from remembering exactly when.) But what’s truly great about The Hulk’s pants is they are not part of a superhero costume, or a uniform. Hulk’s pants are regular pants torn to hell: they give him a visual identity closer to a car crash victim than to Superman. The torn pants are a visual reminder that, at his core, The Hulk is a casualty. He’s a tragedy, not a triumph.

He is more Jack Kirby’s The Hulk to me than Stan Lee’s The Hulk.

This is the first of many warning flags that mark me as the essayistic equivalent of an unreliable narrator. (I believe the technical term is “misinformed.”) Stan Lee wrote more Hulk stories than Kirby drew and The Hulk, especially, is a character of accretion: it takes a suprisingly long time before some of The Hulk’s most best known qualities—Banner turns into The Hulk when angry or stressed out; the madder Hulk gets, the stronger Hulk gets; The Hulk, far at the forefront of modern celebrity, talks about himself in the third person—get attached to the character. And not only is the tone of The Hulk consistent during The Hulk’s tenure in Tales to Astonish when Lee’s writing it, the plots stay more or less of a type.

Left to his own devices, Lee is more than happy to break out a Red spy operating in secret, with a plan to discredit the hero and sabotage the otherwise unbeatable might of the U.S. military, while the female love interest tears up and wrings her hands. Reading early isues of Lee and Kirby’s Thor is intriguing because it feels like you’re watching Kirby and Lee wrestle the character out of one another’s hands: a story will start in Asgard but end up in the mountains of Red China, Jane Foster’s roommate is actually a colonizer from Rigel-3, but the focus is still on that weepy old soap opera.

That’s actually an asset, mind you. It’s part of Thor’s spectacularly loopy charm as issues stretch to the ends of the galaxy then yo-yo back to the flower shop of Granny Gardenia. But with The Hulk, no matter how breathtaking Kirby or Ditko or Buscema pace it, it’s yet another commie spy, yet another tearful scene with Betty Ross, yet another scene of Rick Jones dutifully running about waving his arms. It all works pretty well, especially in ten page chunks (and especially compared to Giant-Man, the other ten pager for part of the run in Tales To Astonish). I think it’s the strongest work you see Stan do when not fully propped up by Kirby, Ditko, or Romita.

But. The Hulk is still Jack Kirby’s The Hulk to me. It is my selfish assertion and you’ll probably never argue me out of it.

Stan Lee and Jack Kirby both served in World War II.: Lee as a playwright, Kirby as a Combat Infantryman. Kirby earned two battle stars, fought in the battle of Bastogne, and almost got both his legs amputated. Lee wrote film strips and training manuals.

The Hulk’s origin is: Dr. (Robert) Bruce Banner saves teenager Rick Jones from Banner’s brainchild, the Gamma Bomb. In exchange for rescuing a callow teenager, Banner’s life is fucked up irreparably: a lifetime of black-outs, angry fights, stuff hidden from the people closest to him. That’s the story of a lot of guys who came back from World War II, the story of the ones who didn’t write training manuals and film strips.

For the majority of his time in print, The Hulk is closely tied to the military—it created him and it wants to destroy him. If peacable Banner and violent Hulk are dark twins, then the military, as personified by General “Thunderbolt” Ross, is yet another sibling or maybe a parent. Like Banner, the military wants peace; like The Hulk, it is quick to lash out. Ross, in fact, believes about Banner and Hulk what each believe about the other—he thinks The Hulk must be destroyed, and he believes Banner to be spineless and weak.

Over the years, the military has been replaced by shadowy government forces, or SHIELD (not that there’s much of a difference), or even other superheroes, and all of those choices are understandable in different ways and for different reasons. There’s a very good case to be made that once the draft ended in 1973, this strange form of resonance I’m talking about was over for the Hulk.

Now he could be just a superhero who scared the crap out of little kids (and so was strangely alluring to them). He still has a lot of resonance as simply the avatar of anger, as the guy who wins simply by willing to be angrier than anyone else. (It’s no wonder social media went through an infestation of parody Hulk accounts.) In a way, The Hulk is simply the logical, kinda hilarious extension of the hero who wins against the stronger, more resourceful villain simply because he has an unbeatable fighting spirit. 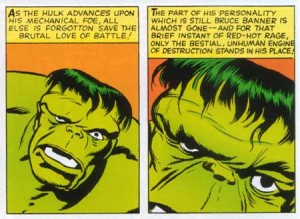 And there is something to be said for a rip-roaring Hulk fight, especially if you’ve got an artist who is really good at scaling things up while keeping the feeling of mass, of making sure everything doesn’t feel feather light. The Hulk’s poor posture is another thing I love about the character, not just because my own posture is especially terrible (although it is) but because he is so dense with muscle he can barely straighten up under his own weight.

But to me, the best stuff about The Hulk is Jack Kirby. Maybe not the way Kirby and The Hulk actually interacted in real life, but the way the two characters share space in my imagination.

In my imagination, Jack Kirby is a devoted family man, a kind and soft-spoken man. But in his comics, there are always new and terrifying war machines clawing up through the ground or arcing over the horizon. Men are always pointing, mouths open, captured at the second before obliteration. Dressed in rags, clothes torn, a man stumbles through the wrecked landscape, a hand to his face, unsure of what’s happened except that it could not have happened without him. This man is always hated. He is always hunted. But in order for the people he loves to be safe, he has to become a nightmare, a cauldron of violence. When it’s over, he stumbles alone into the horizon, knowing that soon it will all start again.  Again, and again, and again.

Puffing thoughtfully on a cigar, caught halfway between the real world and his dream world, halfway between breakfast and lunch, Jack Kirby draws a page of a man hounded by the forces of war, and then moves onto the next.  Draws that one and moves on to the next. When he stops, he goes out to his wife and children, and they sit around a table together and laugh.  And then he goes back to his drawing board, ready to create again.  Again, and again, and again.

8 comments on “Sketchbook: The Hulk”