It’s been awhile since I’ve done one of these. In that time I read Secret Empire #9, Captain America #25, and Secret Empire #10, which wraps up the main thrust of the event. They were…uninspiring, at best. (I also read all of the U.S.Avengers tie-in issues, which were absolutely great in all the ways the main books weren’t–fun and thoughtful and character-driven and interesting. Graeme covered some of why over on the tumblr, if you’re curious, but it feels outside my whiny, dreary remit here.)

I’ve made a bunch of complaints about the series here before, and I don’t feel particularly compelled to just repeat them in a general sense. Instead, I’ll point at a few specific examples from issues #9-10 that seemed particularly disappointing.

First, though: I came into Secret Empire by way of trying to understand what had people so worked up about Hydra Captain America, which we all–including most of the people who objected to HydraCap–knew was going to be reversed. Now that we’ve seen the ending of that story, the outcry seems even more pointless to me. It was a toothless version of a familiar trope, resolved even more toothlessly, barely worthy of acknowledgement by the book’s readers, let alone by outside critics.

But enough about that, for now. On to some more concrete issues, after the jump. (TOTAL SPOILERS, obviously.)

That narration is incredibly annoying. Nick Spencer has been using a pretty dramatic, portentous narrator across his HydraCap story, but the iteration in Secret Empire itself has been especially egregious. It’s a first-person plural narration with no clearly defined narrator that I can see. That is, it’s just “we”–the amorphous mass of, I guess, Marvel heroes?

At that point, why not just use third-person narration? If you’re not bringing anything character-specific to the narration, why use first-person at all? It’s distracting at best, actively irritating at worst–and provides no benefit to the story that I can see.

What it does do, though, is TELL you what to feel, what’s happening, what it signifies–often in place of the story actually showing you those things. 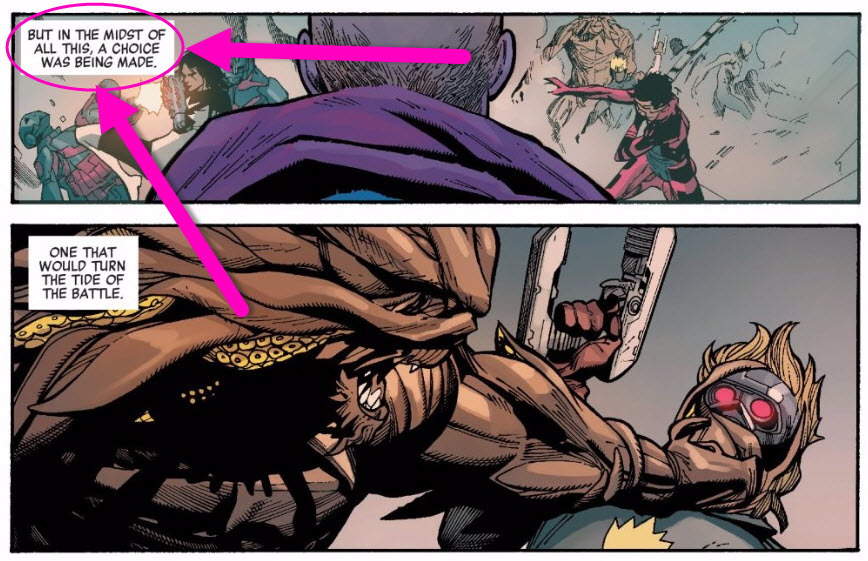 Why does he decide this? Who really knows. What prompts the realization? No clue. How do we know that it’s what he’s decided? Because the narration tells us so. In passive voice, no less–in case the nameless plural narrator didn’t put you at enough of a remove, here Spencer decides to remove ANY agency or action from the characters and just have a decision “be made”.

It’s what needs to happen in the story, so the story makes it happen, in the least surprising way possible. 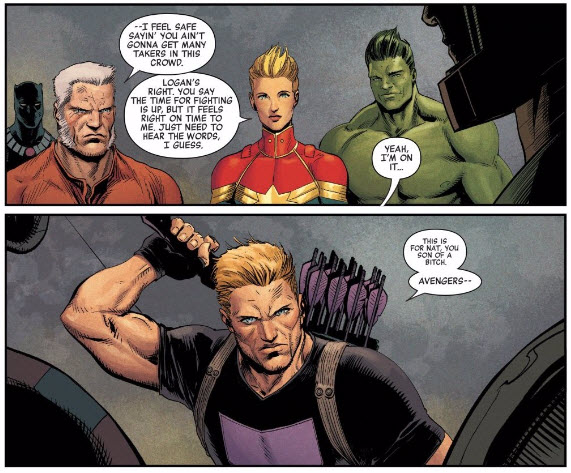 The big moments deliver exactly what you’d expect, and nothing more. In the panels above, from Secret Empire #10, HydraCap (Cosmic Cube-powered Iron Man armor variant) has been giving the heroes a pretty bog-standard “We’re not so different, you and I” speech before the final battle. Our heroes don’t truck with no Nazis, though, so Logan (Old Man variant) cuts him off to tell Cap so. Then Captain Marvel (Mighty variant) takes a second to really emphasize for Cap’s sake that, no, they definitely are not interested in what he is offering–and, she makes it clear, they just need to hear someone give a battle cry to attack.

(Let’s pause for a minute here to think about how stupid this would look in even the most popcorn-fun Hollywood movie, let alone something striving for gravitas. What is Cap doing as this extended conversation takes place? What facial expression is he making? What is he waiting for? Is he thinking about what he’s going to get in his bowl at HydraChipotle? What are all the other heroes doing? Are they ALL listening to this and just kind of shuffling their feet waiting? This scene is dumb even within its own knowingly trope-y context, is what I’m driving at here.)

Anyway, Hawkeye (Occupy Avengers variant) ping-pongs off Captain Marvel’s comment to say, in three separate word balloons: (1) Yes, I will shout the battle cry. (2) I am dedicating the forthcoming battle-cry to my lover, brutally murdered in this conflict. (3) Here comes the battle cry…..! That’s where the page ends.

POP QUIZ, READER: What do you think happens on the next page? If you guessed that the cliche was turned on its head in some way–in ANY way–or that anything even remotely surprising or exciting happens, you would be sadly disappointed. (I was sadly disappointed.)

ANSWER: The next page is Hawkeye completing the battle cry at the front of a group of heroes posing–for no readily apparent reason–in homage to the cover to Secret Wars #1 (1984 edition). There is no background, no kineticism or excitement to the image, certainly no reason for it to take up a whole splash page. The only explanation for this is is that this is a book that likes to allude frequently to other, better Marvel events. 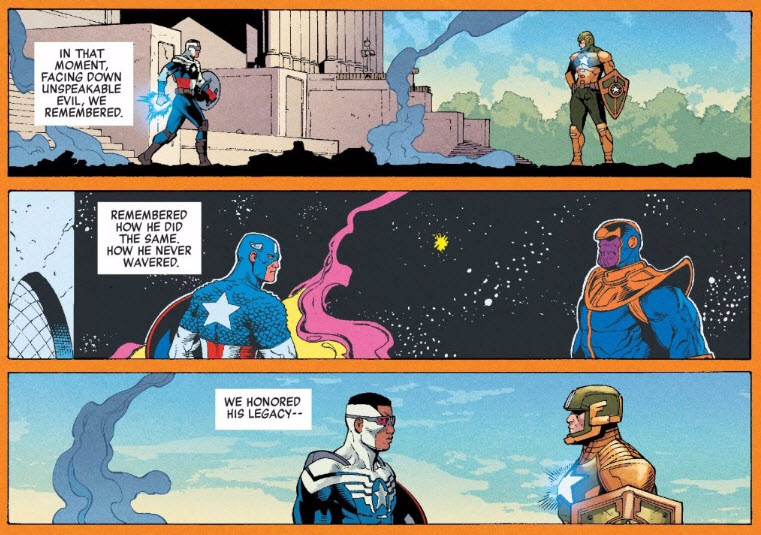 These allusions are not exactly helpful to the story, and are often actively detrimental. Take the above scene, again from #10, in which Captain America (Sam Wilson variant) stands up to Captain America (Hydra edition, Cosmic Cube Iron Man armor variant). Cued by the annoying first-person plural narrator (“We remembered”), the art draws an explicit parallel to an iconic Captain America (Steve Rogers traditional version) scene, walking out doomed to face an omnipotent Thanos.

As an aging, doughy longtime reader of Marvel comics, I recognize this. I get the allusion. I remember that issue being exceptionally exciting when I was 15 or so. If I want to, I get to pat myself on the back for this, feel a momentary psychic connection to other aging, likely-doughy longtime Marvel readers worldwide. “Wow,” I get to say, like the unnamed narrator,”we all remember that together.”

And that’s great. But even to me, it serves no purpose. If anything, it undercuts Wilson’s moment by directly tying it to Rogers doing the same thing first, and in a better story. And I occasionally try to imagine someone relatively new to Marvel books–where by “relatively new” I mean, “has only been reading for a decade or so”–trying to suss out this scene, and it makes me sad.

This is a story where reality can be rewritten on a whim. It will be, in just a few pages, more than once. So this bizarre cutaway to something totally different, totally unexplained, but visually seeming to be in-line with the current events of the story…I mean, I have no idea what a new reader (i.e., someone who has only been reading since Civil War #1 ten years ago) might make of this. Why is it there? What’s the point?

The point, obviously, is that we like reusing favorite images from previous books. 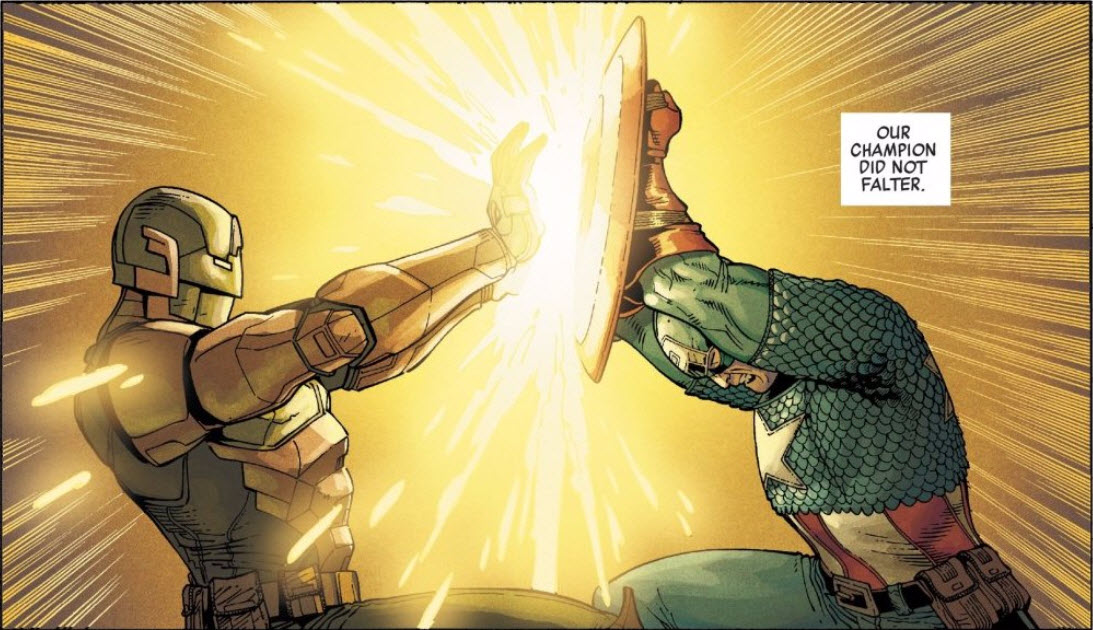 See? Add one more to the incessant use of this panel, for no real narrative purpose. And it’s not just panels–this book has to take a second to allow for an entire line of seemingly unrelated one-shots. 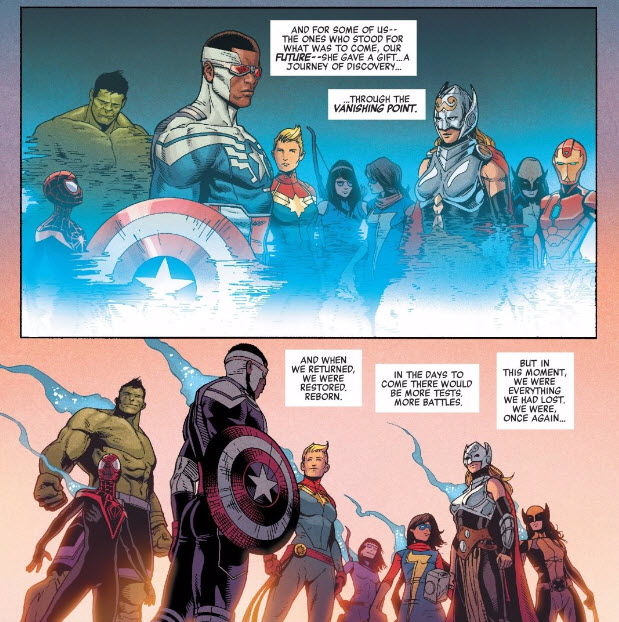 I haven’t read any of the Generations one-shots–just six months til they get to Marvel Unlimited, though!–but I have read Paul O’Brien’s reviews of two of them, and one thing he hits on in both is that the reason behind the series’ fundamental conceit (modern legacy heroes meet their older counterparts in flashback-y stories) is NEVER explained.

“There’s no explanation of why she’s there and nobody seems especially interested, herself included,” O’Brien writes. “There’s not even a suggestion of where you might care to look for the answer if you did care.” Turns out the answer is “in the thin black line separating these two panels in Secret Empire #10, OBVIOUSLY.” Duh. If you’re reading Generations, maybe this scene lands. If you’re not (like me!), it falls somewhere between baffling and annoying. (I can only imagine what it will be like for someone reading a hypothetical collection of this someday in our dystopian future.)

Anyway, then the Cosmic Cube brings Cap back but decides NOT to undo all the damage HydraCap had done, to, I don’t know, teach someone a lesson of some kind, and also so this event was not totally without stakes. Great news if you are Captain America (Steve Rogers original variant) or a big fan of his, less so if you are Black Widow (killed off to make sure this event was not totally without stakes, and also so that maybe all you people will stop asking for a Scarlett Johansson solo film) or Thor (Jane Foster edition, whose cancer was not cured by this omnipotent being to, I guess, teach her a lesson for having had cancer before this limited series started) or any number of other, similarly ill-fated characters.

So, in summary: I still don’t understand the original anti-HydraCap complaints, but this series was kind enough to give me literally dozens of others. So, as the nameless first-person plural narrator might say, I guess we all wind up on the same page together after all.

3 comments on “Well, That Was Disappointing: Matt Finishes With Secret Empire”