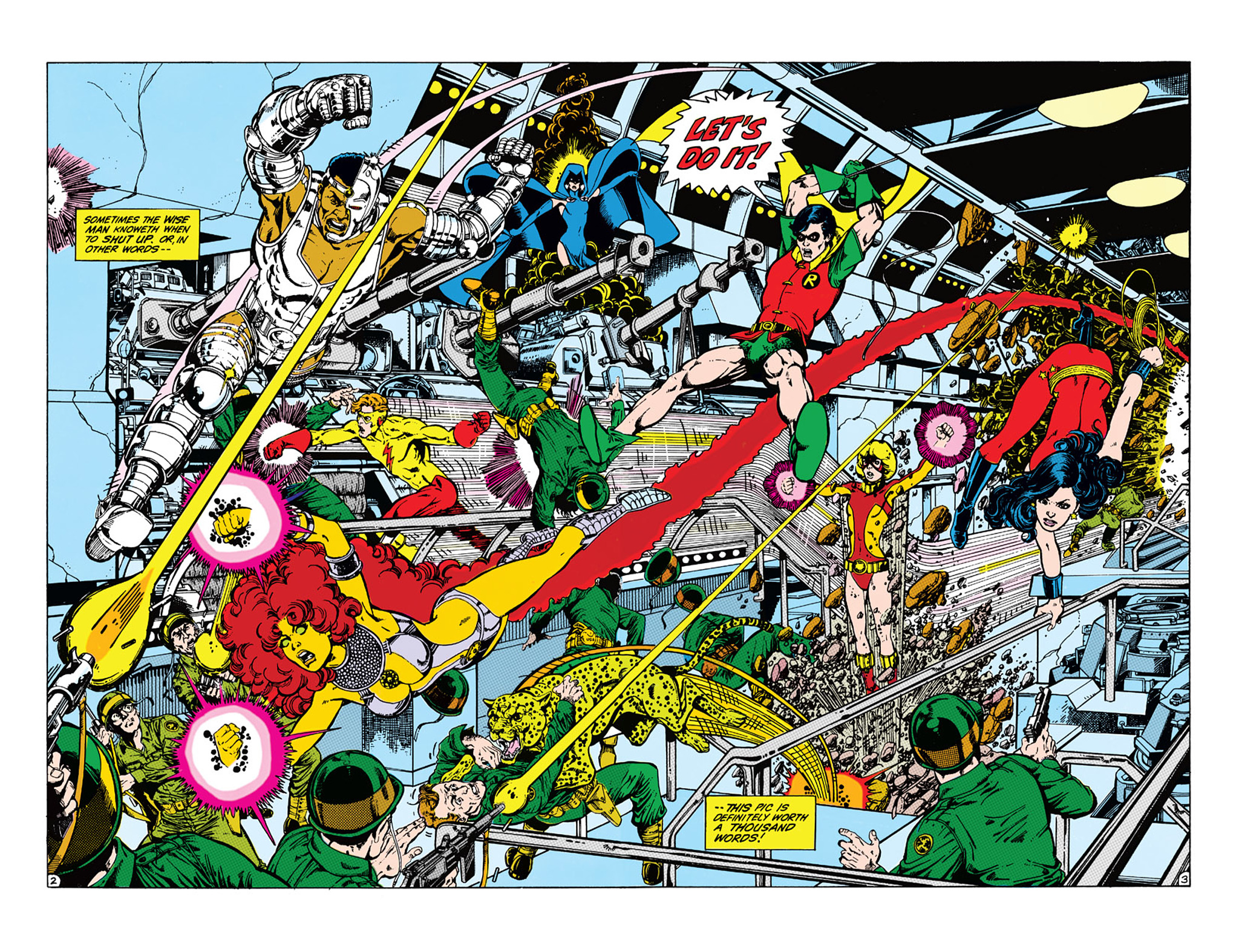 Last month, at some point, I wondered aloud on Twitter why Marv Wolfman’s 15-and-a-bit year run as writer on New Teen Titans/New Titans hasn’t been given the same critical re-appraisal as Chris Claremont’s 16 years as X-Men writer. People responded with a number of suggestions, but having just spend a weekend reading New Teen Titans Omnibus Volumes 1-3, I think I’ve managed to pinpoint the problem: Titans peaked far, far too early.

The three omnibuses offer a snapshot of that era of the series, along with a genuinely scattered idea of what followed — the third volume, which I think rounds up the remainder of the Perez-affiliated material, includes Tales of the Teen Titans #38, 41-50, The New Teen Titans Vol. 2 #1-6, The New Titans #50-61, 66-67 and Secret Origins Annual #3… which is a pretty random assortment, really, but between this and my own earlier reading of the series (mostly Tales of the Teen Titans issues when it reprinted the Baxter series, and some of the latter Wolfman/Tom Grummet New Titans issues), I feel like I have a pretty good handle on what followed that initial Wolfman and Perez run, and it’s not as good.

Which sounds more damning than it’s intended to be; I have really fond memories of a bunch of the Wolfman/Barretto issues, including the second coming of Brother Blood and my first meeting with Hank Hall, AKA the one true Hawk, for example. But despite how poorly they’ve dated — and they have dated very poorly in places — the first 40-50 issues of New Teen Titans have this jittery, infectious excitement that makes them supremely enjoyable to read. There’s a tangible energy of discovery as Wolfman and Perez start realizing that they’ve got an audience and egg each other on to new japes. 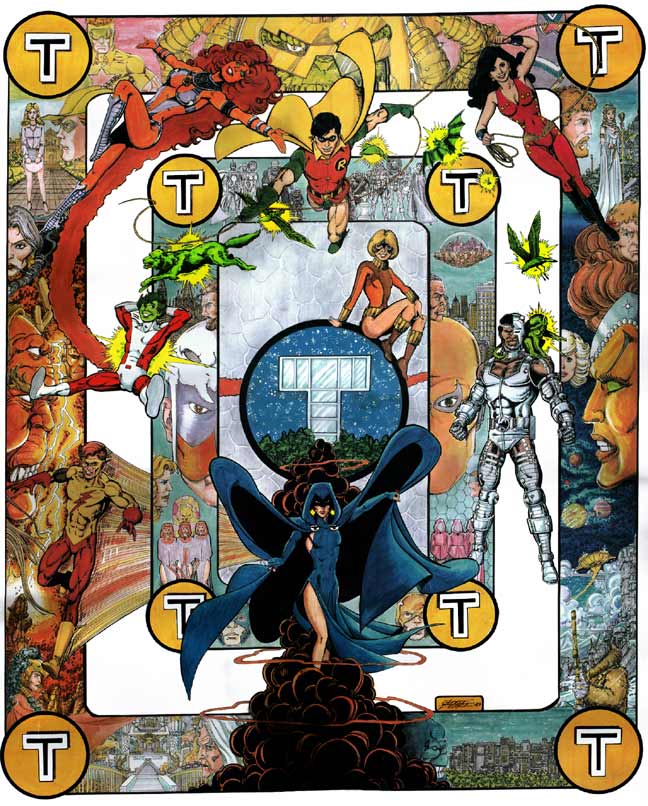 There’s nothing very groundbreaking in those issues — I think Jeff’s argued on the podcast as some point that what makes early NTT so exciting is that it successfully brings the Marvel feel to DC for the first time, and there’s definitely something to that. But in terms of plot, there really isn’t anything that readers hadn’t seen before: My father is a demon! We’re in space fighting aliens! One of the team is a traitor!

(I’m weirdly fascinated by the fact that “The Judas Contact” and X-Men‘s “Dark Phoenix Saga” both involve the team betrayed by one of their number, and happen around 40 issues into the run; were Wolfman and Perez consciously aping Claremont and Byrne, or was this just coincidence?)

What makes it work is that it’s done with such enthusiasm — everything is turned up to full effect, whether it’s the soap operatics (Both Starfire and Cyborg’s lovers are killed off in the stretch of a few months, something that’s even called out in the text), the melodrama of the adventure plots, where both runaways and super villain civil wars have the same breathless, everything relies on what happens next tone, and Perez (with inkers Romeo Tanghal and Dick Giordano, the latter doing some great work) offering up visuals that are almost parodically slick and perfect 1980s eye candy — and yes, the costume designs and hair styles really do place the book firmly in the era in which it was created.

There’s a feeling that each successive arc in the first four years of the series is building on what came before; a sense of oh, they liked that? Well, wait ’til they see this — no mean feat, considering the first arc was about a demon who wanted to rule all of humanity — until the series peaks with the end of “The Judas Contract.” The problem is that it never quite regains its mojo after that. There’re nice moments as the aftermath of that arc are explored at (surprising) length, and the wedding of Donna and Terry Long* is cute in a meta way, but that’s it; the next big arc is a re-tread of the first Trigon storyline, and the book increasingly loses both direction and intent even within that arc. By the time Perez moves on afterwards, and even when he returns years later, the momentum has gone.

It makes sense, perhaps; the Wolfman/Perez team maybe just reached the top and they had to stop (on Titans, at least, with Crisis on Infinite Earths taking up their collective time instead). I’m not quite sure where Titans could have gone post-“Judas,” and find myself thinking about X-Men‘s similar wilderness period after “Dark Phoenix,” which lasted for… what, two years, with occasional highlights? I feel like the book didn’t really find a groove again until Paul Smith came along. Wolfman would go on to work with a bunch of great artists on Titans after Perez — there’s a Jose Luis Garcia-Lopez run in there! — but at its best, on those first 40 or 50 issues, it was a book that always felt like more of the sum of its creators’ parts than X-Men managed. Once Perez left, the book became something else — arguably just as interesting, if not as good — but Wolfman’s Titans was a different series altogether. 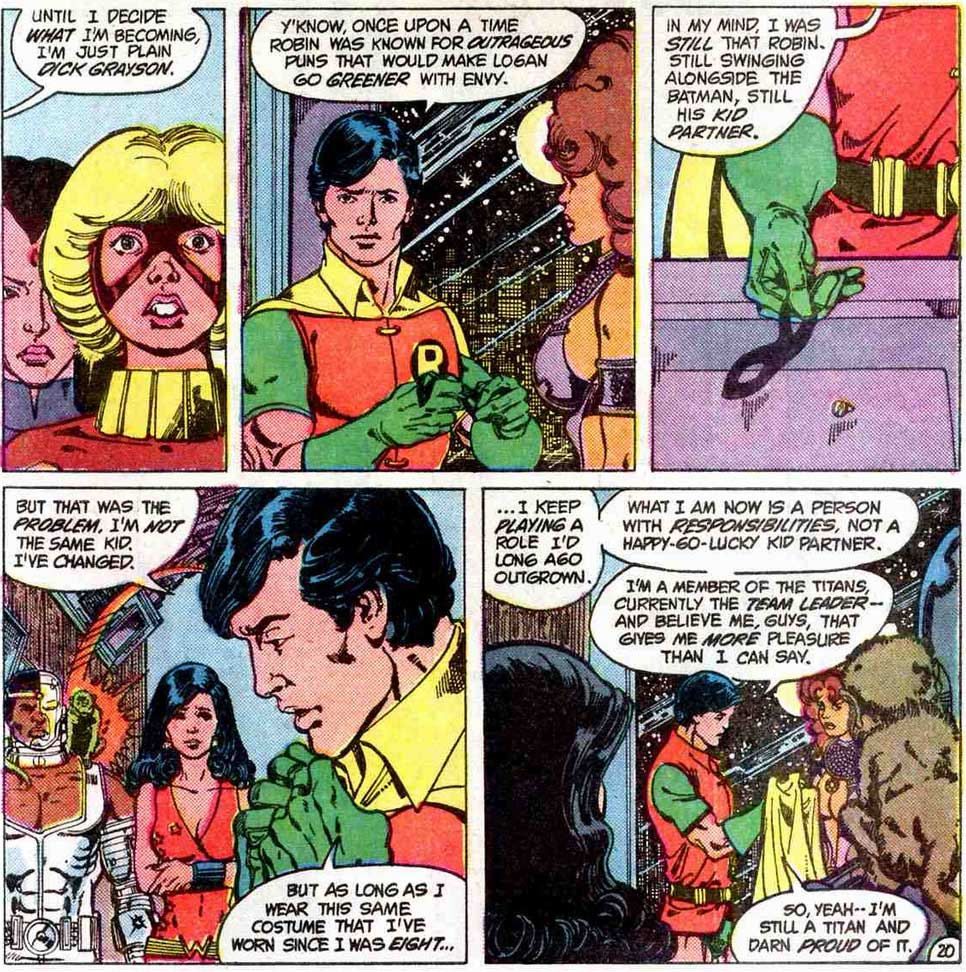 This is my… third? fourth? attempt to get through these issues, and the first time that they’ve really clicked for me; maybe it just required really immersing myself in the material to this extent, or perhaps I was just in the right frame of mind this time around. But I feel like I get this part of superhero comics history now, to the extent that I feel a little sad that it fell apart quite so quickly. If there’s ever an omnibus of the book’s latter attempts to reclaim this feeling (The “Titans Hunt” storyline, around the series’ 10th anniversary, comes closest, I seem to remember), I’d be fascinated to read that again and see how it measures up. Before then, though, I’m going to take a dive into the New 52 version of the team…

* If there’s something about this run that really stands out in a “You know, that’s kind of fucked up” sense now, it’s the older-man/younger-girl romance dynamic at play. Not only in the 29-year-old Terry Long, who sweeps the… let’s be generous and say 18-year-old Donna Troy off her feet despite looking ridiculous and having no personality whatsoever, but also the far-more-creepy Deathstroke/Terra relationship. She’s, what, 15 and his son is older, and yet there they are, fucking in between her missions undercover as a Titan. I know they’re meant to be evil and all, but I can’t believe no-one thought to step in and say, “you know guys, statutory rape isn’t a good look for this book” at least once.

7 comments on “When There’s Danger, You Know Who To Call: Graeme Returns To The Wolfman/Perez Teen Titans”