I have, thanks to the local library, recently been doing a deep dive on the somewhat-forgotten series of The New 52. Who read Team 7? Me! Who raced through all 19 issues of Demon Knights? That would also be me! Who found himself utterly confounded by the 30 issue run of Stormwatch? Just guess.

It’s Stormwatch that feels like the most New 52 of all the series, in retrospect; it’s a series that, when viewed as a whole, feels confused and incomplete, as if beset by a continual indecision about what the series is supposed to be doing and lack of confidence about whether it can do it alone. There are five writers on the 31 issue run, which speaks to its lack of consistency, somewhat: Paul Cornell, who launches it with what feels like a good idea about where he’s going to go but disappears after the first arc, Paul Jenkins, Peter Milligan, Jim Starlin and, in a last issue fill-in, Sterling Gates. 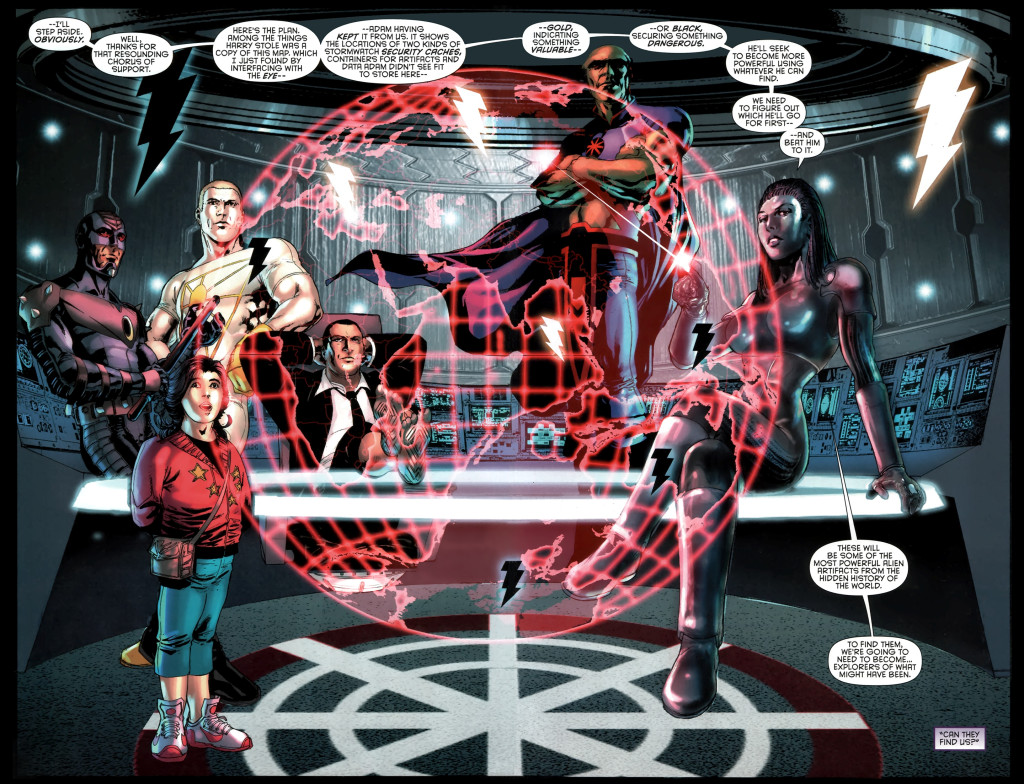 Of those five, Milligan has the longest run — #8 through #18, plus the zero issue — but he never manages to really do anything with it. Instead, he gets to tell other people’s stories, for the most part: he wraps up Cornell’s cliffhanger, he does a crossover with (admittedly, his own) Red Lanterns and also a two-parter that unleashes Etrigan on the modern world that… kind of goes nowhere but touches on Demon Knights mythology a little…? There are also one-shots setting up J’Onn J’Onzz leaving the book to go join Justice League of America and larger Stormwatch mythology that goes nowhere, as well, but that’s essentially it. It’s a frustrating period for the book, because there’s always a feeling that Milligan is just about to do something more interesting, something more him, and yet he never quite gets there.

(A quick aside: Demon Knights, which was another Cornell book for its first 12 issues, then gets taken over by Robert Venditti for the remainder of the run, might qualify as a genuinely forgotten classic; reading it after the fact, there’s a humor and consistency there that comes across as a mix of Jeff Parker’s Agents of Atlas, Gail Simone’s Secret Six and John Rogers’ all-too-short Dungeons and Dragons. It’s a very fun book.)

That said, Milligan’s time on the book eclipses Jenkins, who gets a two-issue fill-in immediately following Cornell’s departure that reads as if he hasn’t actually read what came before, and also Starlin’s run, which is mind bending and hilarious in the way that it utterly rejects everything that came before it — including continuity and the characters themselves — in favor of Starlin wanting to be Starlin. Literally, his first issue starts with a three page sequence in which all of history is rewritten so that he can make the team he wants and not have to bother about what came before. You can tell it’s Starlin doing his Starlin-esque thing: after eighteen issues of Jenny being Jenny Quantum, the spirit of 21st century science, she becomes Jenny Soul, somewhat generic cosmic child and professional plot device. 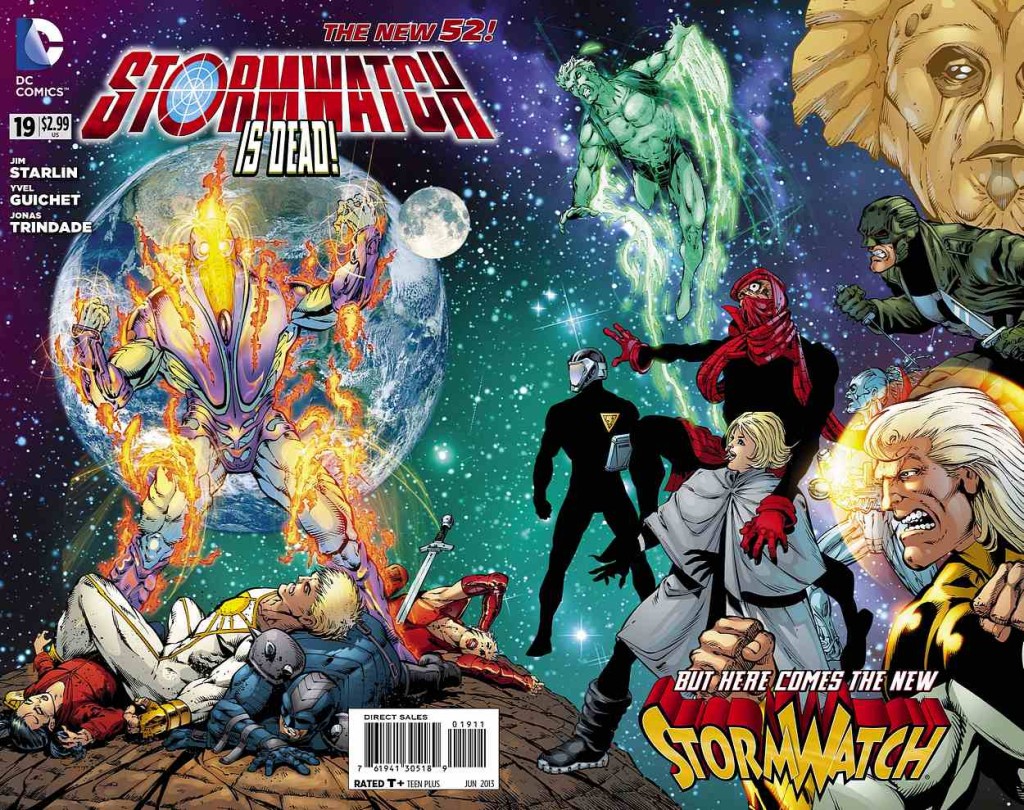 Starlin’s comics can read like shambolic bollocks at the best of times, and Stormwatch only exacerbates this tendency; his surprisingly lengthy run (#19-#29) is filled with “cosmic” stakes that feel utterly meaningless because they’re never given any explanation or weight, character arcs that are either nonexistent or nonsensical and a lazy drift across a plot that never feels any true sense of urgency, intensity or importance. Also, inexplicably, there’s a lot of Lobo — like, old-school, cartoonish Lobo that I had actually forgotten existed thanks to the new Lobo that’s running around these days. It’s genuinely difficult, reading the issues now, to think who the audience was expected to be for the Starlin issues: it feels very much like “well, maybe this will make people read the book, why not?” more than anything else, with all that entails.

(Another problem for me with the Starlin run is the art; Stormwatch is a book that, for the most part, didn’t look great. Not that it looked bad; it just had a lot of artists whose stuff doesn’t do it for me for a number of reasons — Miguel Sepulveda does a large chunk of the book, and his work is too muddy and static for my eye, with characters frowning or growling for no reason the majority of the time, for example. Starlin’s run is drawn by Yvel Guichet, and it’s… oddly elastic, unattractive art that is oddly reminiscent of the parts of Georges Jeanty’s work that leave me cold. Couple that to the Starlin writing, and it makes for an off-putting comic.)

That reading is given more weight by the final issue of the series — another fill-in, this time written by Sterling Gates — which unceremoniously dumps Starlin’s revamp and returns to the earlier version of the characters with only an offhand reference to a visit to an alternate dimension that doesn’t really jibe with what actually happened as much as wink at the reader as if to say, let’s pretend that didn’t really happen. Frustratingly, Gates’ issue is arguably the best of the run, a pilot of how Stormwatch could have worked going forward and the issue that would have worked best as the first issue of the series, not the last one. Despite the 1990s Jim Lee with the edges sanded down art of Jeremy Roberts, there’s a lot of potential in that last issue — Gates essentially takes part of Morrison’s Doom Patrol and part of Wolfman’s Teen Titans and pushes them together to make something that surprisingly works — that could have been great, given the chance. 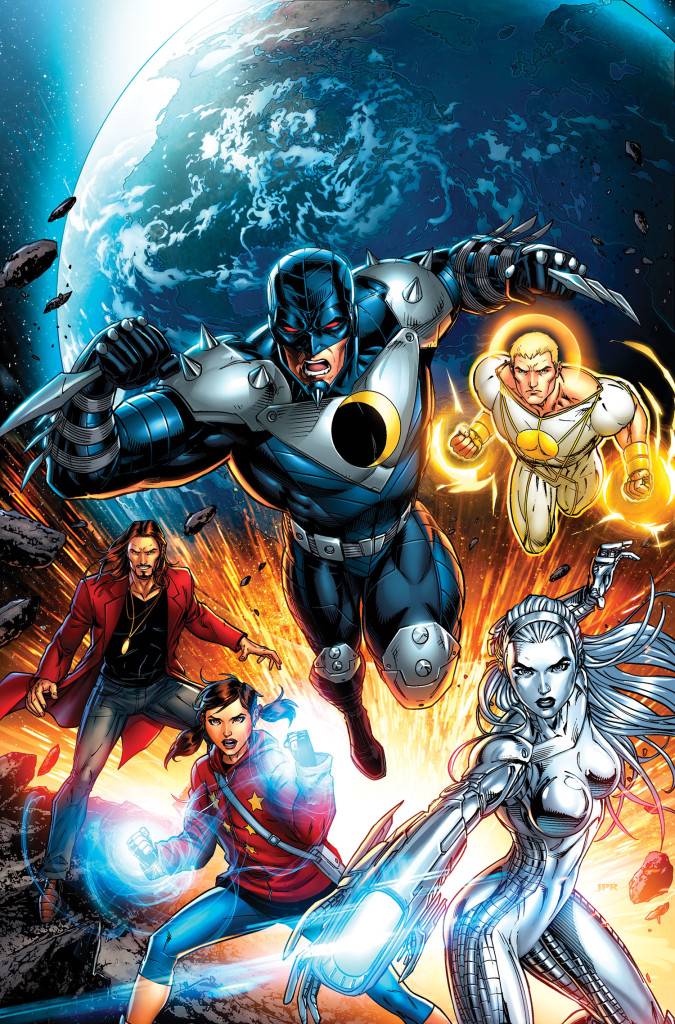 If I’ve learned anything from deep-diving into the New 52’s murkier reaches, it’s that: there’s a lot of material that could have been great, given the chance — but the chance was never really there, with a publisher continually second-guessing its material and changing rules, creators and concepts seemingly without warning. On the plus side, that leaves a wasteland filled with potential for later creators to pick apart (I maintain that someone needs to resurrect Batwoman as the lead of a new Birds of Prey book, but that might just be me), but picking through the wreckage even just four years later can be a grim task.

4 comments on “Eye Of The What?: Graeme Revisits The New 52’s Stormwatch”