WOOOOOOOOOOOOOO IT’S 2016! Welcome to the future, everybody! Time for a fresh start! A new beginning! A time to leave behind last year’s super-normcore faves and come out guns a’blazin’ with a look at something sassy, inventive, obscure, and literary!

OR — and I’m just spitballing here — we could look at the fifth volume of a comic series based on a video game based on a shared comic book universe. ONE GUESS WHICH WAY I GO! 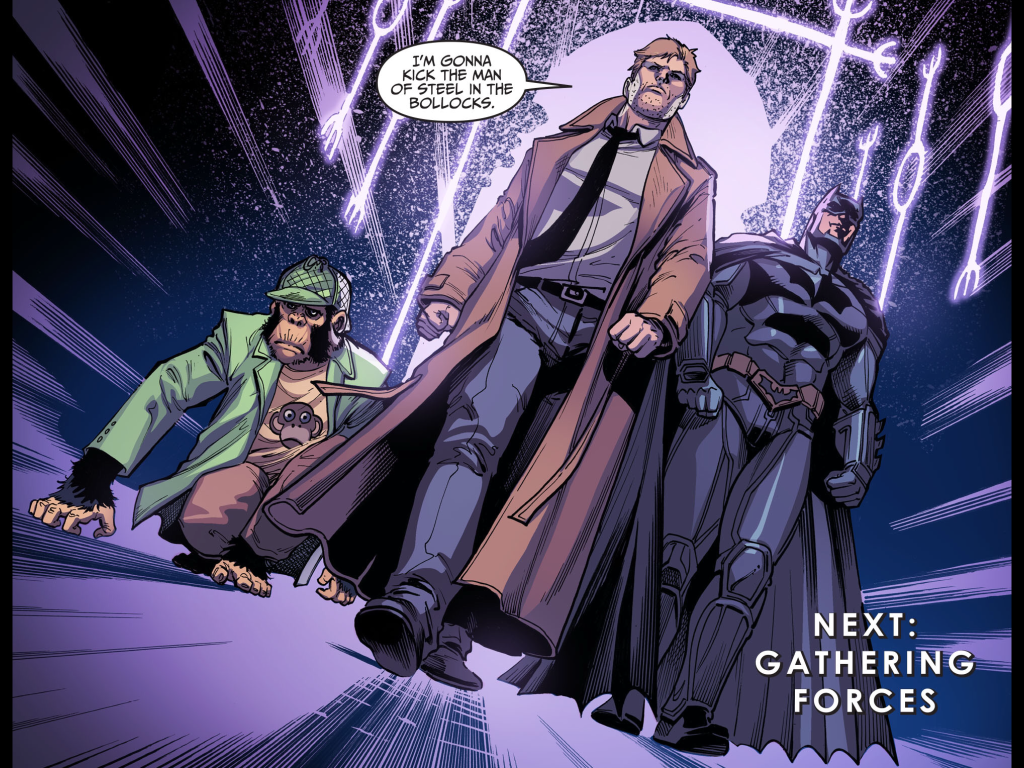 Yup. Injustice: Gods Among Us: Year Three Volume 1, coming right up after some thoughts on licensed comics in general.

So I was a little … embarrassed, I guess, to see how many licensed comics popped up in my list of notable books I read in 2015. My book of the year was Transformers: More Than Meets The Eye. I enjoyed the new Marvel Star Wars books, and the old Robocop vs. The Terminator, and the continuing Transformers vs. G.I. Joe.

I generally loathe the idea of “guilty pleasures” — there’s no reason to feel guilty for enjoying these kinds of things (with the exception of shoving cold takeout into my face while standing in front of the refrigerator at midnight; I feel guilty as hell whenever I do that, and that’s probably for the best). But it’s still a weird feeling, enjoying these books, and I’m not the only one who feels it.

Nearly everyone who raves about TF:MTMTE qualifies the rave with something like “You wouldn’t think this could be done with a toy property!” Or for Transformers vs. G.I. Joe, it’s “I can’t believe Hasbro lets them get away with this!” And as I sat down to write about this volume of Injustice, I kept finding myself thinking along similar lines — “For a comic based on a videogame, this sure is good!” That kind of thing.

And then I had two thoughts:

1) Licensed comics are what got me into this in the first place. I bought scattered comics for a long time, the way kids do: pulling things off the spinner rack haphazardly, reading and enjoying but never really worrying too much about the continuing narrative. (I was given Captain America #265, bought fresh off a spinner rack in a 7-11, to keep me quiet in synagogue at the age of 6. The book ends with Cap and special guest-star Spider-Man free-falling at the start of a 10,000 foot drop, having escaped from a rocket volcano base. It would take me more than a decade to finally read the next issue and find out how they survived.)

But the book that caught me on its soap operatics, well before X-Men or Justice League International would do the same, was Marvel’s G.I. Joe. Issue #16, specifically. I read that issue quite literally until the cover fell off, and I made sure my parents took me to get the next … and the next … and — well, you all know how this winds up.

The more I think about it, the more accurate that read feels… which led me to:

2) All mainstream superhero comics are basically licensed comics at this point. The main source of surprise in reading any of the Transformers books, as noted above, is a vague sense of surprise that the licensee (or toymaker) lets the comic maker get away with this stuff, whatever the “stuff” of a given comic might be. But I’m suddenly having real trouble figuring out why it’s any weirder or more surprising with Transformers or My Little Pony than it is with other major corporate IP like Disney’s Marvel branch or Warner’s DC stuff.

I mean, from a certain perspective the weird thing about Injustice is that DC let the video game folks go ahead with a game whose premise revolves around Superman being tricked into killing Lois Lane and subsequently taking over the world. “I can’t believe the comics people let them get away with this,” says the imaginary strawman in my head!

I’ve been reading the series in collections from the library, and have found it to be consistently better than you’d expect. Writer Tom Taylor, teamed with an extensive roster of rotating artists, takes an ubergrimdark premise and turns it into a consistently enjoyable adventure story — it’s Kingdome Come without the religious subtext or the my-pals-frowning-in-cosplay Alex Ross art. Taylor has a good handle on all the characters, and sells the idea that the characters are driving the plot rather than the other way around. Perhaps most important (and most surprising), he manages to maintain a relatively light tone throughout (once the “Superman murdering Lois and then the Joker” elements are out of the way), letting the characters joke around, using Harley Quinn for some comic relief, and just generally building the book out of the relationships between the characters rather than the needs of the video game plot. 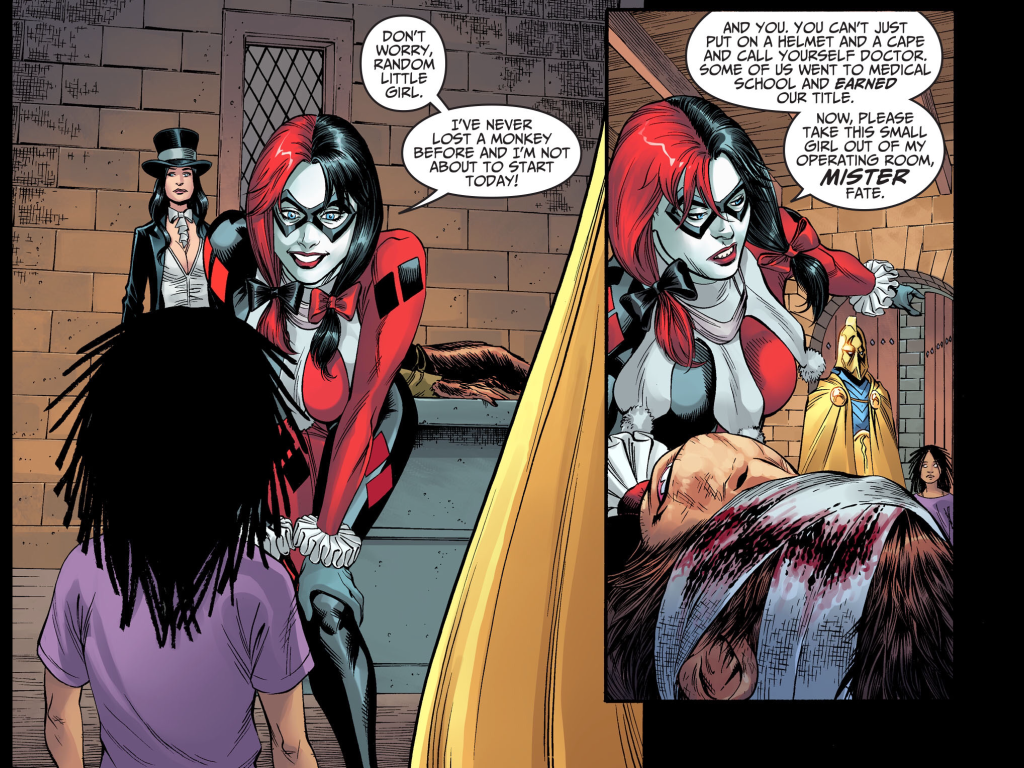 The notable addition in Year Three is John Constantine, who gets involved when his daughter’s mother is killed in a Superman-related incident. Constantine does his rally-the-magic-characters thing Swamp Thing #50-style, because Superman is, of course, vulnerable to magic. And man, it is just a pure joy to read.

The Constantine here reminds me of Garth Ennis’s — the focus is on assholishness, and arrogance, and the firm conviction that he’s going to get everyone he knows killed. But this time around Constantine gets to give his “I leave people like you dead in my wake” speech to Batman, which gives it a bit of a different spin.

There are echoes of Moore throughout this book, not just the old Swamp Thing stuff but also the never-to-be Twilight of the Superheroes project, and Taylor manages to keep Constantine firmly in Vertigo character while still fitting him smoothly into the grand superheroic opera thing that the story has become.

(I should note that I’ve been lukewarm on Constantine’s New 52 appearances, and haven’t managed to get into Justice League Dark at all. So forgive my ignorance if this is all redundant with what’s there.)

I suspect you need to have at least some interest in the DC Universe to enjoy this; much of the fun comes from watching Taylor luxuriate in his non-continuity, hey-Superman’s-already-a-murderer freedom: Superman joins the Sinestro Corps! a different DCU acrobat becomes the new Deadman! the Spectre is not who he seems! Constantine gets Batman and Detective Chimp to share the backseat of Chaz’s car! 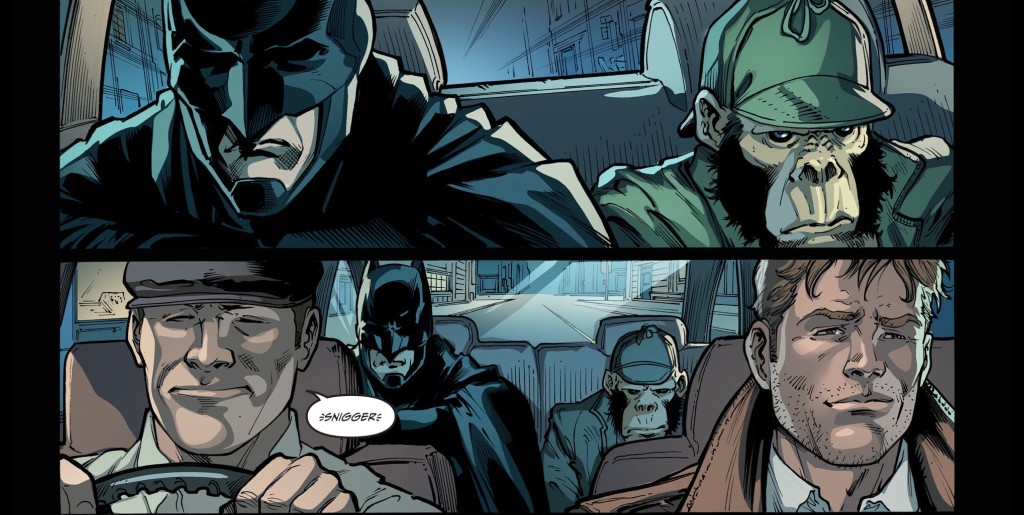 If that litany made you shrug or roll your eyes, you can probably safely stay far away from this series. For me, though, as long as they keep showing up at the library, I’ll keep checking them out.

(One last note: it’s fascinating reading the print edition of a book that started as digital. Because things that were originally meant to have full-screen impact — the tablet version of a splash page — are the size of a quarter-page of print. It’s the exact opposite of the issue where print double-page spreads are smaller (relatively) than their surrounding pages if you’re reading on a tablet, and possibly even more disruptive to the storytelling. I found it incredibly distracting and somewhat disappointing, because you could feel what the pacing was supposed to be, even as it didn’t land. Basically, digital comics and print comics are kinda different things and maybe we should stop treating them as interchangeable?)

2 comments on “Injustice for Matt”