I’ve been trying to write about Snotgirl for months. Literally. I emailed Graeme and Jeff before the first issue was even released asking if either of them was covering it, and stated a firm plan to do a post about it. Then I emailed them just before the second issue was released and VERY CLEARLY explained that I would be writing about issues #1 AND #2. Since the I have written about writing about Snotgirl in a totally unrelated post here, and in a couple of tweets. I have sent poor Jeff and Graeme even more words of explanation and fillibustery.

What I have not done is “write about Snotgirl“.

Now, the usual things got in the way, of course, the litany of excuses that start every fifth blog post: the day job, life, kids, a lack of inspiration, that cruel black dog of depression or at least its smaller cousin, the dachshund of anxiety. Whatever. But part of the issue here is that I’m realizing that I have a harder time writing about Bryan Lee O’Malley than I do about almost any other creator, and especially about his post Scott Pilgrim work. This is partially because of my personal reaction to Scott Pilgrim, and partially because of something else, which it has taken me three months to realize.

I’ll get to that realization later, but let me start by heaping praise on Scott Pilgrim again. 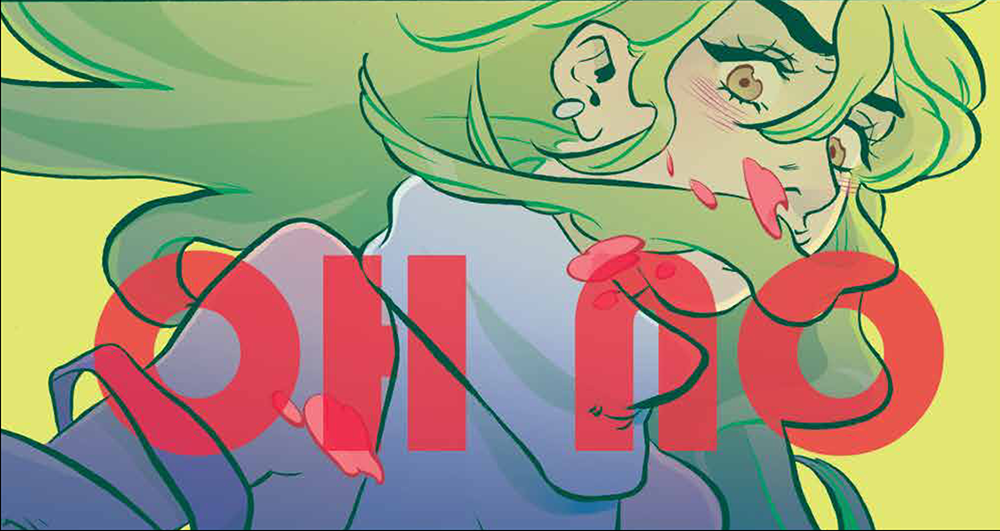 O’Malley’s Scott Pilgrim was the rarest of things; a book that I had heard hyped to the stratosphere that somehow managed to (for me) surpass the hype. That first volume was (and remains) nearly perfect to me, simultaneously brilliant and dumb, highbrow and low, realistic and fantastical, cartoonish and melodramatic. It’s a mashup of things that I recognized and/or loved and/or desperately wanted about being 20-ish, and the fact that it culminates in a skewering of the very nostalgia it trades on is its final genius.

So, yeah, I liked that one. So did a lot of other people. And it kind of feels like that’s been driving O’Malley crazy ever since.

His follow-up graphic novel, Seconds, felt patently about being someone who had experienced one earlier success and was having trouble following it up–and, on the most literal plot-based level, was about trying to rewrite past decisions to create a more palatable present. It largely steered clear of Pilgrim-esque gimmicks and told its story; on the one hand, I missed those filigrees but on the other, if you keep writing the same song over and over again, your albums are going to keep getting duller.

Seconds also felt to me like something of an aging-up of his first solo graphic novel, Lost At Sea—writing about that book at the time I listed a bunch of thematic/plot similarities between the two: female protagonist, deeply internalized first person narrative, unexplained weirdness and/or magical realism, a budding friendship between a shy introvert and a brash crankypants being central to the narrative, etc. It felt at the time like an attempt to revisit an idea and some themes that maybe he felt hadn’t quite landed the first time through.

But now here’s Snotgirl, which hits on almost all those same similarities and also uses a lot of disquietingly Pilgrim-esque gimmicks in its presentation, and I wonder if O’Malley is maybe still having trouble finding his post-Pilgrim footing, even all these years later.

I also wonder, to be blunt, how much of this is O’Malley working out his own issues in public. The lead of this book, Lottie Person, is a star in a small (but, in the world of the book, significant) subculture–fashion blogging, not comics. She’s been successful in the past, but is having something of a crisis about where she fits in the present.

“WHO IS LOTTIE PERSON?” O’Malley writes in the solicitation text for issue #1. “Is she a gorgeous, fun-loving social media star with a perfect life? Or is she a gross, allergy-ridden mess who can’t get her act together?”

And, I mean, it’s really hard to read this, and to read O’Malley’s twitter account (which occasionally settles into a promotional groove, but which has occasionally veered straight into the depths of the writer’s neuroses), and not to draw the parallel there. This is simultaneously kind of weak, thin, sketchy criticism, and also kind of what we here at the WaitWhatcave like to call the Fraction Fallacy–the overwillingness to extrapolate dimestore psychoanalysis out of reading a few comic books.

Leaving all that aside, this is…well, here’s the big realization, the one that took me months and three issues to reach: I’ve had trouble writing about Snotgirl because I don’t like the book. And I really, really want to.

There’s an element of this that’s like meeting up with an old friend from a different part of your life–from college, maybe, or from your days riding the rails with a pack of shiftless hobos, or from the glorious days with the circus before the tragic accident that killed your parents (or whatever is appropriate to your own personal “good ol’ days”). Hanging out with someone like that, sometimes the only thing to talk about is the good ol’ days themselves. If those stories dry up–if you just can’t bear to hear one more thing about Boxcar Luis or Gustave the Tumbler–things get real awkward real fast.

That’s part of my issue with Snotgirl: the things I like feel directly borrowed from Scott Pilgrim or Lost at Sea. Everything else just kind of sits there.

But there’s another element that’s much simpler: I have no idea what on earth I’m meant to care about in this book. Lottie is unlikeable, pretty deliberately so. But so are all her supporting characters, who range from vapid-and-unlikeable to one-note-but-unlikeable to, in the case of the book’s mysterious antagonist (question mark? maybe?), mysterious but unlikeable.

This group of characters mixes and matches and mingles and exchanges oh-so-modern banter and text messages but there is, #realtalk, no discernible point that I can see? There are mysteries and interpersonal drama but none of it seems to be carrying the story forward, and none of it seems to make much of an impact on Lottie, even when it is enormously impactful.

One of the things I’ve always admired about Scott Pilgrim was how nailing the fight-comic/videogame conceit onto a teen romcom gave it a propulsive forward motion and provided the whole damned story with a forced structure. Snotgirl, so far…makes me admire that even more, I guess. Because there’s nothing here. There’s no spine.

What you’re left with is some snappy, glib dialogue from O’Malley, and some lovely artwork from Leslie Hung, and it’s just not quite enough. (Even Hung’s artwork sometimes sits uneasily for me–she nails the fashion side, and everyone looks appropriately glorious, but it’s also occasionally dissonant to read O’Malley’s dialogue coming from such…well, sexy people. The kawaii element of O’Malley’s self-drawn work plays well with his dialog patterns, and also serves to soften the moments of violence or sex in a way that–for me–makes them read smoother. Hung’s artwork isn’t photorealistic, or even strikingly more realistic at all, but this is a more angular cartooning, somehow harsher in my eyes, less squishy and round. O’Malley’s high-gloss finish is a big part of what makes the whole of his work, and the difference here is striking.)

Which puts me in awkward position, because I don’t want O’Malley to just endlessly revisit what he’s already done (“SP3: The Master Race” sounds like a nightmare, and also like the world’s worst Sonic the Hedgehog pastiche) but I’m also finding it really hard to get onboard with this. Maybe it’s time to leave behind the female protagonists, deeply internalized first person narratives, unexplained weirdnesses and/or magical realisms and try something totally new…or maybe it’s just time to give Snotgirl some forward momentum and clearly defined plot goals. Either way would be an improvement, I think. 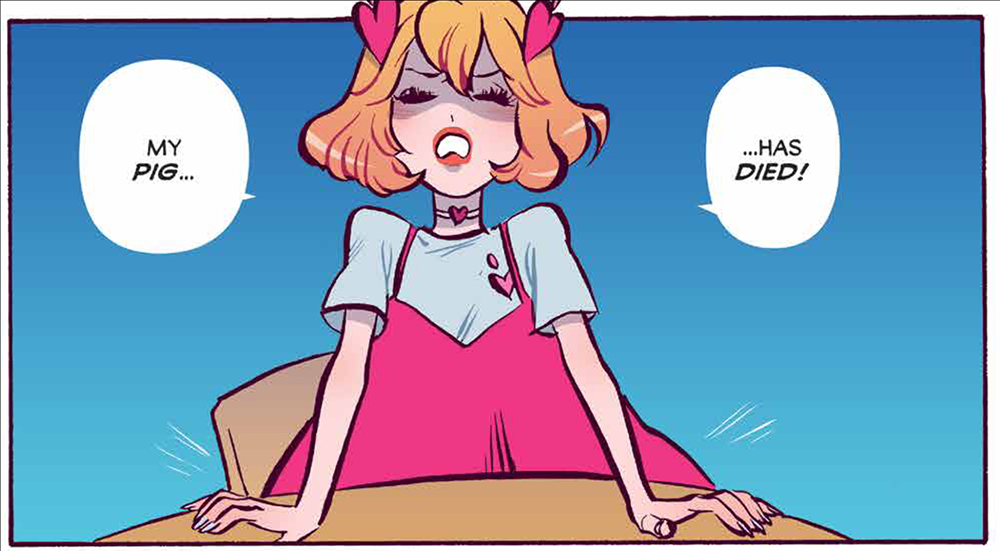