I’ve noticed something odd recently: I no longer care about the recency of the comics I’m reading, or reading about — or reviewing, for that matter. Once upon a time, I thought reviews that went up Sunday for books that had come out the Wednesday prior felt stale and useless. Now, a smart and entertaining bit of comics reviewing and/or criticism feels like a smart and entertaining bit of reviewing and/or criticism, regardless of if the book is a day old, a month old, or half a decade old.

I think a lot of factors have contributed to this shift. Some, like being a so-called grown-up and the associated responsibilities and timesucks, are obvious. (I never thought my college Wednesday afternoons, reading new issues of Preacher and Stormwatch in a bar or divey Chinese restaurant, would become quite such objects of personal nostalgia.)

But then there’s other, external factors. Like the way digital comics remove the risk of a comic being hard to find after its first week of sales. Or the way Marvel Unlimited has basically timeshifted most of my Marvel reading by 6 months.  Or the way that Marvel has, y’know, totally disrupted the continuity and flow of their books by ending the universe and telling like 800,000 What If stories. Or the way that the library has made single issues and collections unexpectedly available at times of their choosing, not mine. Or the way sales on Comixology will suddenly bring a whole host of new books into my life.

All of these things have made me much less concerned with only reviewing books that came out in the last 20 seconds; hopefully you all feel similarly. Because if not, it’s going to be really jarring when you see that, like, half the capsules below are from earlier than Wednesday — starting with last week’s All-Star Section Eight #3 after the jump. 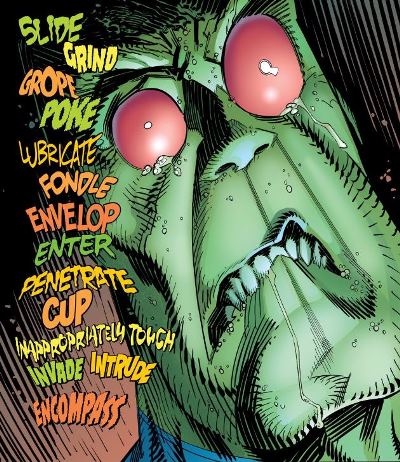 I consider myself a reasonably big fan of Garth Ennis’s comics, even thought that’s probably no longer an accurate description — I’d bet that I’ve missed more of his recent work than I’ve read. (So many war stories. So, so many.)

But Hitman is one of my all-time favorite comics — maybe tops on the list, honestly — so I knew that, for me, this spinoff book was going to have a hard time living up to its precursor. I didn’t expect it to approach that title’s highest points; if nothing else, the whole Section 8 concept plays more toward Ennis’s notoriously problematic gross-out humor side rather than his (equally notorious) study-of-masculinity-and-friendship side, and it was the focus on the latter that really elevated Hitman. I figured it might be a lighter bit of fluff, a nice casual visit to an old friend’s neighborhood even though that friend moved away years ago. I knew I might not love it.

But I didn’t expect that it would be THIS bad. Ennis has always been a rock-solid comic writer. Even his worst comics tended to be fundamentally sound from a storytelling standpoint, even if the details went totally off the rails (Hi, Punisher Presents: Barracuda MAX!) or the protagonist was a complete non-entity (How you doin’, Just A Pilgrim and Bloody Mary and both of your various sequels!) or whatever.

This, though, is something else entirely. Ennis and longtime artistic collaborator John McCrea both seem to be working this book in a loose, cartoonish style much more reminiscent of the early issues of their gross-out “comedy” book Dicks than anything I can remember them doing previously in a superhero universe, and using a similar tone as well. It’s a book that’s trying to have its superhero cake and also eat it and make a poop joke about it too, but it all just sits together very awkwardly. Deciding to up Bueno Excelente’s always-distasteful role in the proceedings was also probably a terrible idea.

There are hints that all is not as it seems and that there’s a larger metaplot that might contextualize some of the more puerile humor … but there are also hints that this is just, um, not something that’s working, at all, and it makes me very sad.

You know what else makes me sad? Justice League #43 — or, more specifically, my reaction to it. Those of you who pay a weird amount of attention to my ramblings here might remember that I was totally lukewarm on the last issue right up until the last page, which I called “simultaneously so awesomely stupid and so stupidly awesome that I genuinely want to see where Johns and company are gonna go with it”.

Well, here’s where they went with it: the most boring place on earth. What looked like it was going to be a bonkers crazy idea — BATGOD IN THE MOBIUS CHAIR WRECKING STUFF! — turns out instead to be “a bunch of people arguing with Batman about sitting in a chair.” 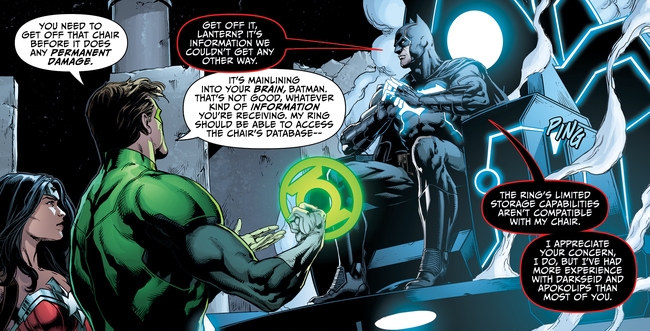 The bulk of the issue basically strikes the same tone as the last one: rock solid superhero comic, some familiar Geoff Johns-ian melodrama (Wonder Woman narrates a chunk of it by retelling the myth of Scylla and Charybdis, for god’s sake), some solid Jason Fabok art … and then yet AGAIN they get me with a entertaining, potentially bonkers cliffhanger. Geoff Johns has dragged me in with his cliffhanger-y skill repeatedly, back to his days on Infinite Crisis and probably before. I am well aware that repeatedly falling for this sort of thing makes me an idiot, and that, in turn, is what makes me sad. (About this comic, anyhow. So, so, so many things make me sad in general.)

Something that didn’t make me sad, though, is Phonogram: The Immaterial Girl #1. 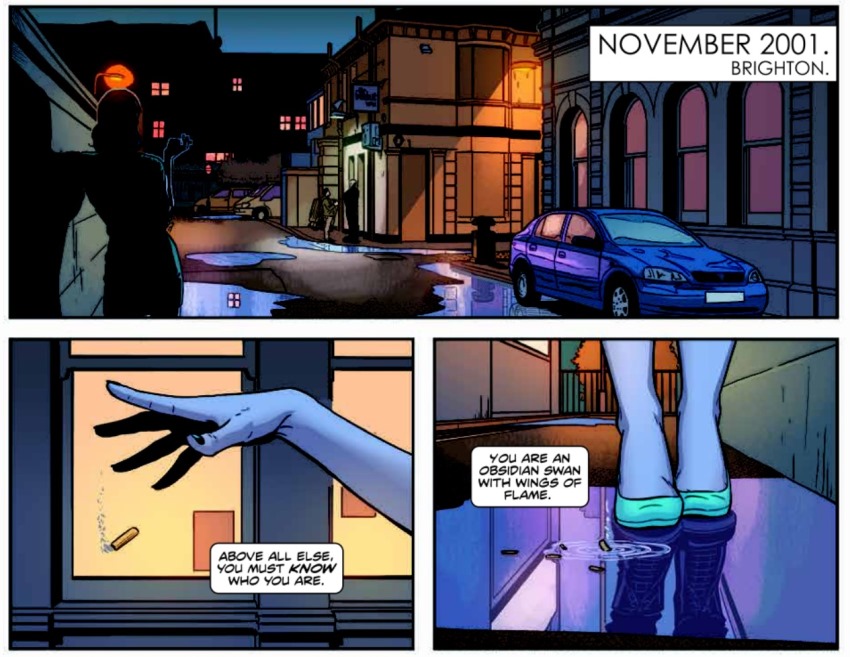 It is trite and cliched to use music metaphors to write about Kieron Gillen and Jamie McKelvie’s music-as-magic comic, but I’m a pretty trite kinda guy, so:

One of the truest things that people say about musicians’ careers is that they put their entire lives into their first album and about ten months into their second — the old “difficult second album” thing, where the second record is a shallower, less-honest rendition of what someone cynically thinks was successful about the first album. Gillen and McKelvie very definitely put their whole lives into the original Phonogram: Rue Britannia series, but then they did something unusual: they got much, much better for the second run, The Singles Club.

Since then they’ve (in the metaphor) gone mainstream, released a few albums that sanded the rough edges off their sound and put some pop-chart gloss on the production (#YoungAvengersForever), formed a wildly successful side project that has outshined the original (I think it’s fair to say that Phonogram:Nirvana::The Wicked + The Divine:Foo Fighters), and then somehow come back 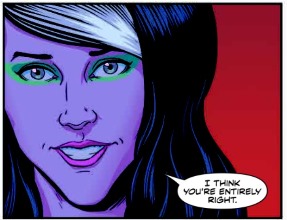 to their roots and put all that accrued experience and growth to use in service of a record that still has the raw-nerve veiled-autobio immediacy of their debut.

This book would be a delight just in seeing how much Gillen and McKelvie have both grown as artists since they last visited these characters, but it’s also a wonderful, successful expansion of the Phonogram universe. Very excited to have this book back in the world, and even more excited that — based on the first issue — it may actually be superior to its forbears. (UNLIKE SOME OTHER BOOKS I MIGHT HAVE ALREADY MENTIONED IN THIS POST *COUGHCOUGHSECTIONEIGHTCOUGHCOUGH*.)

McKelvie’s work here feels livelier even than his very recent WicDiv work. There are sequences here where it feels like he’s really channeling an in-his-prime Michael Golden — not a comparison I’d ever thought of before for McKelvie, but definitely one that I enjoy seeing.

Speaking of changing art styles in the latest installment of a long-running saga, Stuart Immonen comes onboard Marvel’s Star Wars #8. And the weird thing about what Immonen is doing here is that — at least to my eye — he’s shifting back to what his style was when I first became aware of his work, specifically the more photo-realistic stuff he did on Superman: Secret Identity.

It’s a change that suits my personal tastes. I could admire the more stylized, slightly more Walt-Simonson-esque approach he brought from (roughly) Nextwave onward — I think I remember Warren Ellis once describing it as Immonen trying to take his style down to the fewest possible number of lines — but it never quite clicked with me the way the earlier style did. It’s a sensible shift, for a book so dependent on recreating the look and feel of a big-screen blockbuster, and one that really seems to agree with Immonen. He’s nailing the likenesses and cinematic vibe, but he’s also retained the kinetic dynamism of his Nextwave/Fear Itself style, which means the book is humming along much more briskly under his pencil than it was under John Cassaday’s slightly stiffer approach.

Which is a good thing, becase Jason Aaron’s story feels … not like it’s losing steam, exactly, but … well, to be honest, what’s worrying me about the writing is incredibly specific to this kind of expanded universe book. The story feels so worried about fidelity to its source material that it’s turning every scene into a wink or a nod or a nudge or a callback to something that we’ve seen somewhere else, or WILL see somewhere else ( from an in-story perspective) that it somehow manages to stale otherwise strong writing.

And despite that concern, it’s clear that Aaron is doing work here. Like Garth Ennis, even Aaron’s worst work tends to be very solid, His dialogue is brisk and readable, his plots tend to be clean and propulsive enough to get through their rough patches, and he uses the medium well. So I’d expect him to do things like nail the voices of these iconic characters (which he does) and find elegant ways to get us to various Star Wars-ian locales in each issues (which he also does). What impressed me here was how well he managed to have the existing characters play off the new characters, without the new characters seeming like they’re coming from a totally different universe (or, more accurately, medium).

But then we spend a few pages here with a scene that clearly echoes the Mos Eisley Cantina setpiece from the original movie, and it makes me wish that this book was a little less concerned with calling back to the films and a little more focused on emphasizing its own many strengths. On the other hand, when it looks this good, it can kinda do whatever the hell it wants. 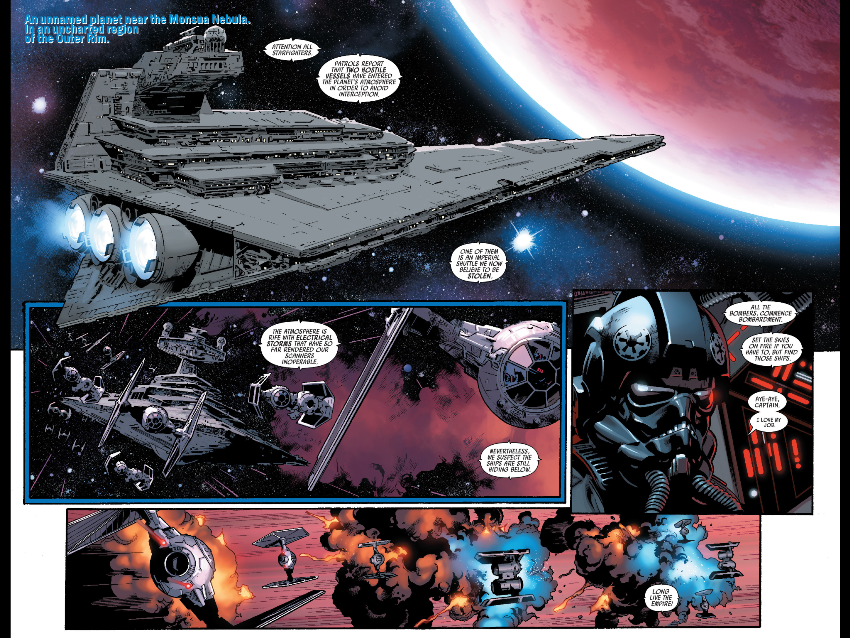