So these first few weeks, I’m kind of trying to figure out what the best approach is here. Last week’s post decided to turn itself into a lovenote to the Giffen/DeMatteis/Maguire Justice League, which … well, fair enough. Who am I to stand in the way of a piece of writing taking on whatever form it feels is most natural, right? YOU DO YOU, BLOG POST.

But this week I’m going to try on the old-fashioned capsule review format and see how it feels. It won’t just be books from this week (although I’ve got a couple of those in here), and there’s really no rhyme or reason to which books I’m including beyond “comics that made me think of something to say.” And, full disclosure, some of these were received as review copies while others were purchased with my own cash, so that probably influences my opinions as well.

Justice League #42 is a weird book. Well, “weird” is probably the wrong word, as it’s a pretty straightforward superhero story in the 2015 Geoff Johns mode.  Which is to say that it hits all the right beats, contains a couple of solid action sequences, and is at worst a breezy, readable comic.

But there was something missing from this one. I’m not nearly the KirbyHead that Jeff and Graeme are, but I did just read the entire Walt Simonson Orion Omnibus, and there’s some ineffable element of Kirbyness that’s just missing from this incarnation of Darkseid.  (Actually, it’s probably not “ineffable” — Jeff and Graeme and a bunch of other critics could probably sum it up pretty quickly. But it’s ineffable to me, so pbbbbbtttt.)

It’s something mythopoeic, I think, some kind of Kirby-ish gravitas that’s missing, and the result is a Darkseid who feels much less like a New God and much more like a comic book supervillain. Maybe it’ll all come together in the later issues — and I’m certainly willing to check and see, because the last page here is simultaneously so awesomely stupid and so stupidly awesome that I genuinely want to see where Johns and company are gonna go with it.

I feel like I owe Green Lantern: Lost Army #2 an honest readthrough, since I kept using the Green Lantern books as examples of DC YOU! books that were leaving me cold last week — at a minimum, I feel like I should figure out why. Lost Army, as near as I can figure out, is sort of the continuation of the ongoing space-opera Green Lantern saga, with all the different colored rings and the endless lost batteries and, I dunno, people possessed by otters made out of emotion or whatever. And I think if you were still into that, this would probably seem pretty good. I lost track of the whole Green Lantern emotional spectrum mythos a couple of issues into Blackest Night, and nothing here made me want to come back in. I’m old and jaded and yell at clouds about how I just want to see Green Lantern as an outer space police procedural, so … it’s not you, Lost Army, it’s me. 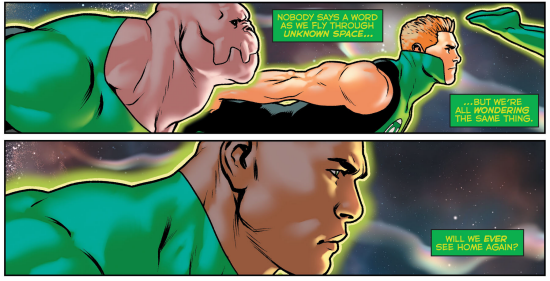 Over at Marvel, the Secret Wars tie-ins are kind of baffling me, even as I generally enjoy the main series. Some of them feel like they’d be much better served as straight What If…? stories without the weird plot gymnastics to loop in the patchwork world and the borders between kingdoms and the god Doom, while others make all that stuff an integral element of their stories. The net result is an enormous deluge of books that are notionally tied together by a cover logo but often have very little in common. Far more of the tie-ins have left me cold than have intrigued me, but this week brought at least one good one from each type. 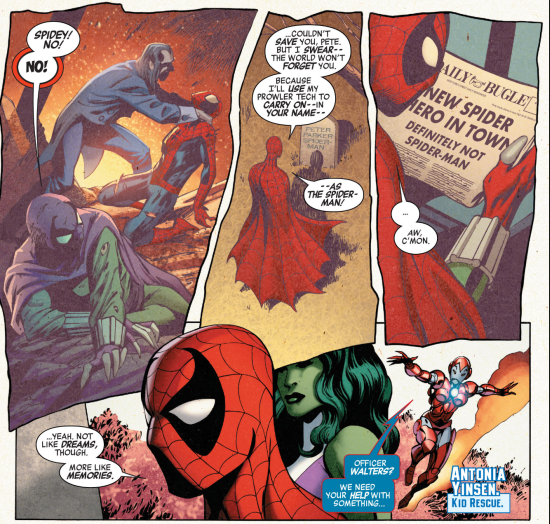 Captain Britain and the Mighty Defenders #1, by Al Ewing, Alan Davis, Mark Farmer, and Wil Quintana steers straight into the Battleworld skid. It is directly about people remembering their pre-Battleworld lives, and Doom setting two of the kingdoms against one another, and — like most of Ewing’s work — it is a gleefully entertaining read. It pivots off a clever what-if branchpoint from the original Marvel Universe, contains a pleasingly eclectic mix of characters (and gives them each a distinctive voice), and then takes a sharp swerve two-thirds of the way through into a thinly-veiled cross-company crossover that plays right into Ewing’s strengths.

Alan Davis’s work has an oddly sketchy look in places that didn’t totally work for me, but Davis at 80% is still better than a lot of what’s out there. This was an unexpected delight in the neverending sea of Secret Wars stuff.

If Captain Britain is quirky and fun and eclectic, Where Monsters Dwell #3 is Garth Ennis at his Garth Ennisiest, Garth Ennissing it  up all over the place. This is Ennis in his notoriously spotty “madcap comedy” mode, a screwball buddy comedy (maybe?) starring a macho 1920s man’s man and a flapper socialite with “sapphic tendencies” who have survived their encounter with dinosaurs only to be captured by a tribe of beautiful, scantily-clad women. If you have ever read or even heard about a Garth Ennis comic before, you can imagine the mature, even-handed way in which this plays out. I was willing to roll with it — I have a lot of time for Ennis’s work, and he’s reunited here with artist Russ Braun, who did a hell of a job with the back half of Ennis’s The Boys — but it isn’t hard for me to imagine other people getting annoyed with the whole endeavor.

You can actually feel Ennis resisting the temptation to use a “cunning linguists” joke here.

What’s really bizarre about the book, though, is just how little it has to do with Secret Wars. I’d’ve thought that a book like this would be an easier sell as a completely standalone limited series; it seems like the Secret Wars branding is just going to disappoint people looking for more of God Doom’s Game of Thrones fan-fiction while also chasing away people who might just want to read another mildly problematic macho-culture-send-up post-WW1 comedy from Ennis and Braun. (NOTE: I will feel really dumb when the cliffhanger is resolved by a cowboy zombie Ultron and steampunk Rick Jones or something.)

I was apprehensive about Invader Zim #1, from Oni Press. I loved the cartoon years ago — that was my gateway to Jhonen Vasquez’s comics work — and this project just SCREAMED “you can’t go home again.” But … it’s kind of great? Again, assuming you like this sort of thing.

But if you do … man, it is remarkable how effectively Vasquez (writing here with art by Aaron Alexovich, Megan Lawton, and Simon “Hutt” Troussellier) finds the voices of the characters again. (Literally — I could hear the voice actors in my head as I read the comic, and the voice cast is even credited alongside the creative team in the comic itself.) 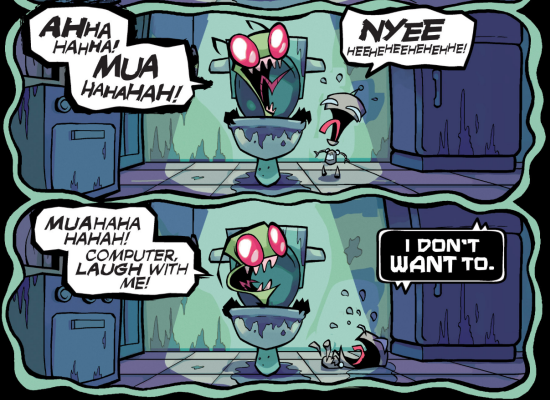 I can’t claim that I’ve been sitting around waiting for Zim to come back to TV (or to comics, or podcasts, or … anywhere, really), and I had largely forgotten how much I enjoyed Vasquez’s comics work in general, but reading this book was like running into an old friend at, like, a farmer’s market(? or somewhere? where do people run into other people?) and realizing that, hey, that guy was pretty okay, and maybe you should even keep in touch moving forward.

That was not a good simile. I’m sorry. I’ll do better next week, maybe.

8 comments on “Matt vs. Capsule Reviews! And Only One Will Walk Away!”