What wasn’t so clear was what I was going to put in the title. It had to be a song reference of some kind; the unwritten internet-content-maker’s rule that all Phonogram articles must include as many elaborate music references as possible is made even more stringent when you’re writing about Nowhere Men as well. And I knew I wanted it to cover the departing/returning thing, which seemed easy enough (as that’s a pretty standard pop music trope).

I thought about “Say Hello,” from Drugstore’s excellent major label debut, which felt nicely Phonogram-esque (the band formed in London in 1993! their debut was released in 1995!) but wasn’t quite on point enough. That led, reasonably enough, to “Say Goodbye,” a maudlin (and, in hindsight, weirdly date-rape-y) Dave Matthews Band song that couldn’t have been tonally farther from what I was looking for while still being music. From there I wound up remembering (for the first time in years) the Chris Brown song of the same name, which, well, no. Somehow it took me that long to land on Adele’s recent single, which didn’t feel quite right, and then the Lionel Richie song of the same name, which came very close (probably as an “is it me you’re looking for” gag).

Those last two had put aside the “goodbye” part of the concept, and turning back to that brought me to the Magnetic Fields’ “How To Say Goodbye”, but that put aside the “hello” part. So at that point, naturally, inevitably, I landed on … the band Hellogoodbye, which is relevant to ME in that I wrote a small blurb on them for Spin.com right around the time I first wrote about Phonogram, in Spin magazine but is otherwise obscure and completely unrelated to this entire post.

However, the name of that band was what it took me to FINALLY land on, literally, the most obvious pop song in the ENTIRE WORLD incorporating the concepts of “hello” and “goodbye,” especially when writing about one comic intrinsically tied to British people and music, and another that explicitly models its four rock-star scientists after the Beatles. (It’s the one in the video up above, in case that wasn’t screamingly obvious enough.)

Those three paragraphs are going to be my new go-to illustration when people ask me to explain my weird neuroses from now on.

Anyway, on to the comics!

Somehow, I had never contrasted these two books in my head, which is surprising as hell in hindsight. Even aside from the thematic similarities I mentioned above, there’s a lot to compare here: they’re both stylish, smart books; both thoughtfully designed; both feeling like they’re presenting clear, auteurish voices of their creative teams. (And, in both cases, they did feel like auteurish creative teams, appropriately according to the Gillen McKelvie paradigm. More on this in a bit.) And now they’re both titles that have released seen long gaps between releases–Phonogram‘s Volume 1 concluded in 2007, Volume 2 concluded in 2010, and Volume 3 this week; Nowhere Men‘s first arc ended in October 2013, so this new issue marks the end of a 2+ year interregnum.

But that’s also the biggest difference between the two: Phonogram was a deliberate series of mini-series, each theoretically complete unto itself, while Nowhere Men stalled after its first season as its artist, Nate Bellegarde, wrestled with depression, severe enough that it continually stymied his attempts to return to the series and ultimately led writer/co-creator Eric Stephenson to make the difficult decision to replace him. But there was no clean break after issue #6; the book was always meant to continue, and issue #7 picks up right where #6 left off, with very little recap or hand-holding to guide potential new readers.

So the biggest question for me, right off the bat, was how the new artist, Dave Taylor, would change the book–because Nowhere Men, as noted, initially felt like the production of a gestalt creative team, Stephenson & Bellgarde & colorist Jordie Bellaire & designer Fonografiks, with a strong, idiosyncratic voice and a firm handle on what they wanted the look and feel of the book (and its world) to look like.

The good news is that the transition to Taylor is smooth. He nails the likenesses of the characters, always a worrisome prospect in a series where the artists don’t have the crutch of an iconic costume to lean on, and Bellaire and Fonografiks help make the changeover feel even more seamless. Fonografiks is possibly the unsung hero of this project, really. Each issue features in-universe ads and excerpts from in-universe books and articles, and each of them is very carefully designed and created with period-authentic details; the way this ancillary material is presented is arguably just as important as the text it contains. 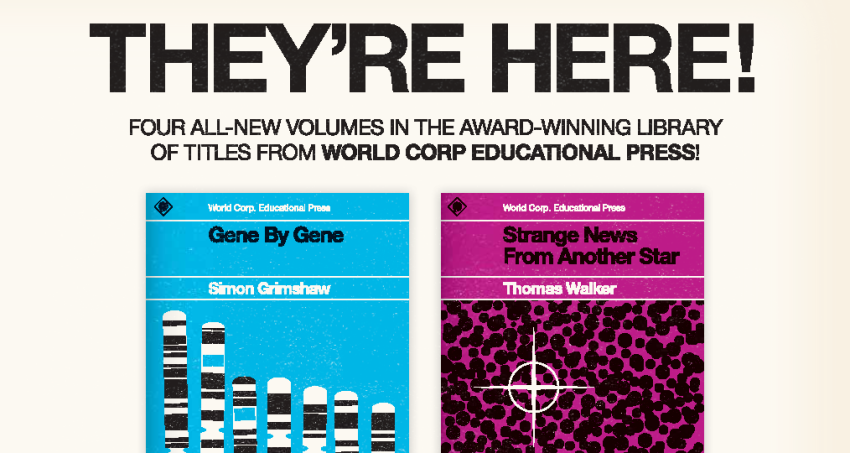 Emi Lenox comes on board to provide yet another bit of extra-fictional material, the digital sketch diary of one of the newly-introduced main characters, Monica Strange, and it’s a clever touch. Ascribing Lenox’s work to Strange gives instant insight and background into a character we’ve heard about previously but not seen, while also expanding the universe much like the ads and magazine excerpts. (The digital-reader overlay on the sketch diary pages is an especially nice touch.) 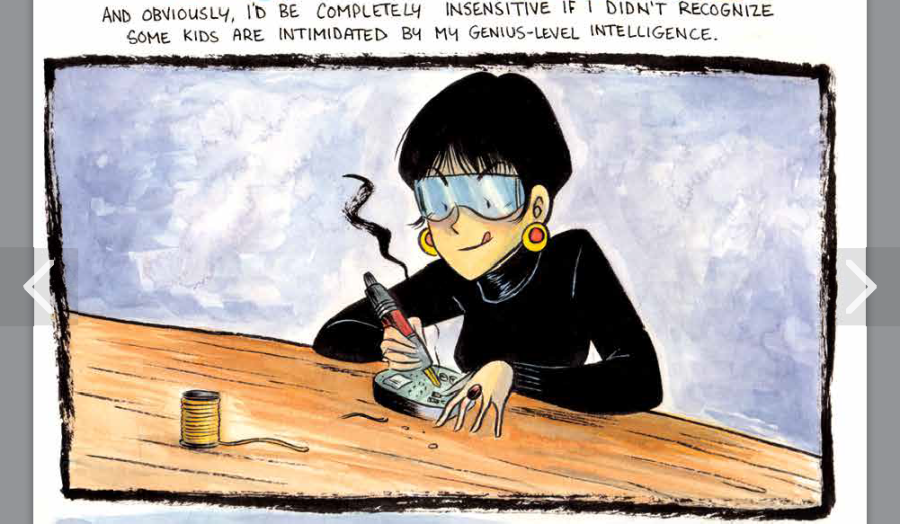 Storywise, Stephenson plows ahead, and it’s going to be interesting to see the shape of this story once he’s done. For me, the most interesting and effective parts of the first run of the series were the flashbacks to how this world was established, what these four science-stars did in their youth and how they changed the world. But as the issues wore on, the focus has moved to their effect on the “modern” world, and more specifically to an “infection” story that, in the first collection, felt much less interesting to me than the deep world-building that preceded it. As that story starts to move forward here, though, it’s becoming clearer how it’s integrated into the world, and it’s already more effective (for me) as a result.

I didn’t follow this series on initial release–I caught up with it in trade–but I’ll be following along in real-time now, and I’m glad to have it back.

I was glad to have Phonogram back, too, but now, with the release of Phonogram: The Immaterial Girl #6, it’s gone again, allegedly forever. I’ll miss it, but at least the Gillen McKelvie gestalt have sent it off appropriately.

With this final issue, Immaterial Girl officially becomes the most complete, most traditionally structured Phonogram story. (The debut series was fairly traditional in structure but, in hindsight, shows some rough patches as both writer and artist hone their chops; by the second series they’re both already much more polished, but the structure is [deliberately] non-traditional, multiple views of the same evening in a device that’s part Rashomon and part Short Cuts. This book is them at the height of their powers, during their self-proclaimed “imperial phase,” but it follows a pretty straightforward, traditional plot structure with a clear focus on one character. ) And it is delightful.

By now the elevator book on the pitch is pretty well-known: what if music really were magic? But it’s a high concept that’s always worked on multiple levels: you can read this book as a sort of melodic Hellblazer, but it’s also (in its own way) a slice-of-heightened-life, autobio through a distortion pedal–not particularly like Scott Pilgrim, per se, but not as unlike it as it might have seemed at first. And that balance is at its strongest in this series as well; the autobio comes through more clearly than it has in the past, but not at the expense of the magic.

And yet again Gillen McKelvie seem to have to magicked the real world into the shape of his book: without spoiling anything, there’s a famous celebrity death at the heart of this book (run through that same distortion pedal of magic and music and metaphor), and later on there’s a David Bowie reference, and somehow it feels like the whole first few weeks of 2016 have been one long, elaborate overture to this final issue.

They (along with the artists brought on to do the “b-side” short stories in each issue) nail it, in the end, putting a fitting cap on this Immaterial Girl series on the micro level, and the whole arc of Phonogram on the macro one. And, unlike Nowhere Men, they’ve managed somehow to do it while keeping the team together throughout. It’s an impressive accomplishment, and a terrific comic.

If we have to say goodbye to Phonogram, though, it’s nice to be able to also say hello (or “welcome back”) to Nowhere Men. Yet again, the real world is just doing its best to accommodate Phonogram‘s meta-plot.

(Speaking of meta, I went ahead and made a playlist of Hello/Goodbye songs–first the ones listed above, in that sequence, and then an assortment of others. Listen to it below, if that sort of thing interests you. But my taste in music is generally appalling, so I’ll totally understand if it doesn’t.)

One comment on “Hello, Goodbye: Matt Looks At The Farewell Of Phonogram And The Return Of Nowhere Men”