Housekeeping: Don’t miss Graeme’s excellent look at the not-really-all-that-legendary Micronauts: The New Voyages, one post down.

You guys, wow. What a seriously great week of comics, as long as you like Kieron Gillen and/or Star Wars and/or Batman comics of an artsy/literary/social bent and/or Rob Liefeld putting out what might be the legit worst comic I’ve read in like a decade (Bloodstrike #2, fact fans!) and/or more goddamned Secret Wars tie-ins and/or the return of Bitch Planet and/or like dozens of other really cool things!

Man! This is the kind of week you really dream of, as a comics fan — just a ton of really good, really varied work, with plenty of good grist for the ol’ internet content mill I work in.

So, logically,  I’m gonna write about a Dr. Who book that came out half a year ago instead — a franchise I know nothing about. Come and see! 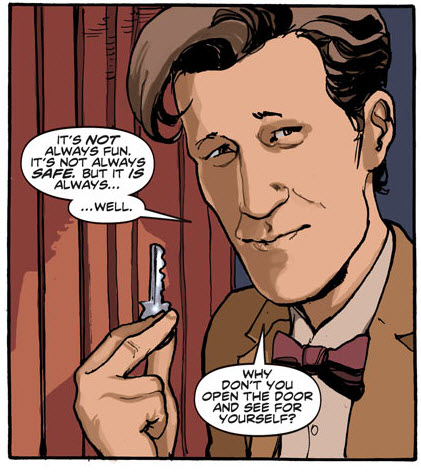 When I say I know nothing about Dr. Who as a franchise, I mean it. Here is a list of things I knew (or was at least reasonably sure of) w/r/t Dr. Who prior to reading Dr. Who: The Eleventh Doctor Vol. 1 – After Life:

That, quite literally, is it. And yet when I saw the book at the library, I grabbed it immediately, because it was written by Al Ewing. I have officially reached the point where I will read literally anything Ewing writes, and this is the most dramatic proof possible.

(Ewing co-writes the first issue with Rob Williams, whose work I also enjoy, and the two trade off through the collection; Simon Fraser provides art for the first half with Boo Cook filling in on the back end.)

And y’know what? It’s pretty good. Not quite good enough to get me to watch the TV show, but a very enjoyable way to kill some time with a book. And it turns out that many of my assumptions are actually spot on:

(I totally whiffed on the Daleks, though. No Daleks or Cyphermen or Cybermen to be found. Sadface.)

The thing I was most right about, though, is the Gaiman/Adams thing. Because, speaking as someone who is coming to this whole Dr. Who thing totally cold, what this book feels like is Gaiman doing an Adams pastiche. There are some very Gaiman-ian elements — the heroic lead who doesn’t fight and doesn’t seem to really do much of anything except seem oddly mopey but also smart and cheery all at once; the sidekick (Companion, I guess?) who is a librarian a much more active but also sad, so sad; the general tone of slightly literary whimsy about the whole thing; the David Bowie stand-in who becomes a supporting character — and also some very Adams-ian flourishes, including an evil corporation (but evil in a less bureaucratic way than Adams would’ve gone for, I think) and some zany aliens and even more whimsy.

And, reading over that insane block of a sentence, I realize that it sounds like I’m being snarky or reductive, but I’m not. There’s a lightness of touch about the whole book, a sense of … kindness, maybe? … that suffuses the whole story in a pleasant way, and elevates it beyond goofy wannabe Douglas Adams territory.

The opening is very ’90’s Vertigo, the dull gray life of the Companion as she loses loved ones and is swallowed up by the tedious awfulness of day-to-day life, smash-cutting to a brightly colored alien dog being chased by The Doctor … but it’s effectively done, and aided immeasurably by Simon Fraser’s art.

I’m hugely embarrassed to admit that I’ve been conflating Simon Fraser and Frazer Irving in my head (and, in fact, I’m not sure why I’m admitting it at all), but I found his art here really distinctive and appealing. Although his base style has a very Gene Ha feel, there’s an Ian Gibson element — a kinetic jaggedness — cutting across his style that really livens it up beyond Ha’s stiffer, more posed characters. I can’t say I loved the photo-ref on The Doctor (and it’s a weird feeling, being SURE that something is photo-reffed even though you have no idea what the reference is) — his facial expressions all too often looked weirdly fixed and out-of-palce — but in every other aspect, Fraser is an effective and appealing cartoonist.

He also benefits from comparison with Boo Cook, whose work seemed several notches below the standard that Fraser had set, and more suited for a terrible mid-nineties Iron Man comic than this amiable confection.

And confection is the right word. It was an enjoyable way to kill 45 minutes while enjoying a cup of tea (I am easily swayed by pop cultural cues), and something I’d revisit in another book from the library, although probably not seek out on my own.

Also, it further cements my plan to read everything that Ewing puts out. If he can get me to sit through five issues of Dr. Who after years of total disinterest, he can do anything. 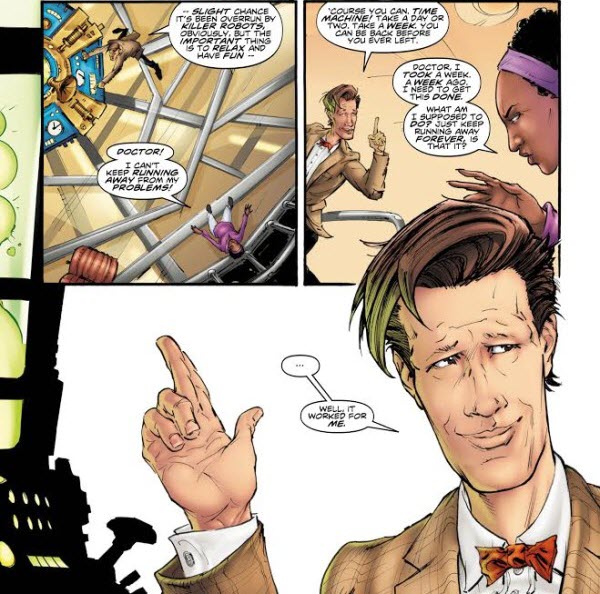